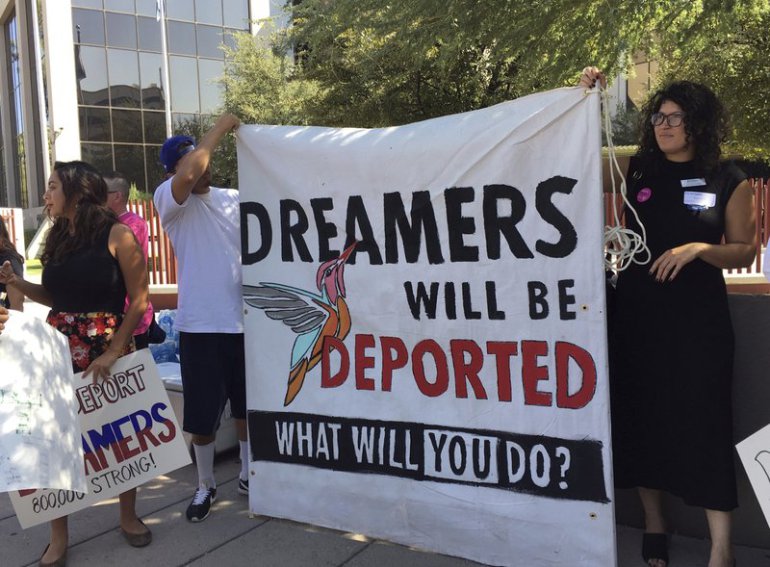 Happy Labor Day.   North Korea appears to have tested a larger hydrogen bomb yesterday.  So needless to say, here we go again with the threat of imminent thermonuclear war.  Defense Secretary James Mattis issued a stark warning to North Korea if it threatened the U.S. or its allies, The Hill reports.  Said Mattis: “Any threat to the United States or its territories including Guam or our allies will be met with a massive military response.”

He added: “Kim Jong Un should take heed the United Nations Security Council’s unified voice. All members unanimously agreed on the threat North Korea poses. And they remain unanimous in their commitment to the denuclearization of the Korean peninsula. Because we are not looking to the total annihilation of a country, namely, North Korea.”

Mattis: "Any threat to the United States or its territories including Guam or our allies will be met with a massive military response." pic.twitter.com/w1Dc9Deo6y

And then Trump goes and says something stupid like this:

The United States is considering, in addition to other options, stopping all trade with any country doing business with North Korea.

First off, the President cannot unilaterally end all trade with a host of countries.  He thinks he is a dictator but he really should learn the limits of his power.  Second, let’s assume he had that power.  The list of countries that “do business” in one form or another with North Korea is extensive.  India, Mexico, Russia, France and the big boy, China.  We are not going to stop all trade with China.  If we did, we would plunge our economy into a depression almost immediately.   And China isn’t going to “stop all trade” with North Korea no matter what Trump does, because if they did, it would result in a humanitarian catastrophe just across their own borders.

So grow up, Mr. President, will you please?

Meanwhile, we have this horrible news:

BREAKING: Trump has decided to end #DACA, with 6-month delay https://t.co/bPLvJ1qBcN via @elianayjohnson

President Trump “has decided to end the Obama-era program that grants work permits to undocumented immigrants who arrived in the country as children,” Politico reports.

“Senior White House aides huddled Sunday afternoon to discuss the rollout of a decision likely to ignite a political firestorm — and fulfill one of the president’s core campaign promises.”

“Trump has wrestled for months with whether to do away with the Deferred Action for Childhood Arrivals, known as DACA. He has faced strong warnings from members of his own party not to scrap the program and struggled with his own misgivings about targeting minors for deportation.”

Former Clinton and Obama staffer Ronald Klain’s “Here’s the most significant thing Democrats could do to help working families now” at The Washington Post, and notes: “There’s energy in the Democratic Party around big ideas, such as single-payer health care or a universal basic income. But the most significant thing Democrats could do to help working families right now isn’t designing a grand new program — it’s getting in the trenches to fight for a simple old idea. Specifically, trying to stop the Trump administration from denying millions of workers the overtime pay they have earned…Rather than siding with his voters, President Trump caved to major employers. Last month, his Labor Department announced that it was considering “stakeholder” — read: business — concerns that the new rule’s salary level was “too high.” Attention MAGA red-hat wearers: The president believes if you are making $600 a week, you may be making too much to deserve overtime. The Lord of the Apprentice Boardroom, the King of Mar-a-Lago, the Master of Trump Tower thinks you — making $15 an hour — may be paid too much to get overtime. He believes your boss should be able to make you come to work at dawn, stay far into the night, and not pay you one dime more for the extra hours worked…Democrats should try to attach amendments to legislation, updating the law…and putting the Obama rule into effect. They should talk about overtime whenever they can, and challenge Republicans on it in every corner carryout, gas station, work site and suburban mega-store.”

Impt piece by @ThePlumLineGS on the coming crisis that ending DACA would cause for countless students & universities https://t.co/RZIInMtibK

There is some statistical good news in the most recent Gallup poll, conducted Aug 2-6, 2017: “In the U.S., 61% of adults say they approve of labor unions, the highest percentage since the 65% approval recorded in 2003. The current labor union approval is up five percentage points from last year and is 13 points above the all-time low found in 2009…Eighty-one percent of Democrats approve of unions this year — significantly higher than the 42% of Republicans who approve. This disparity is not as stark as it was in 2011 when Republican approval was 26% and Democratic approval was 78%. Democratic approval of unions has been fairly steady over time, while the approval levels of independents and Republicans have fluctuated…As more U.S. adults approve of unions, their interest in wanting unions to have more influence is also on the rise. Thirty-nine percent of Americans would like unions to have more influence — the highest figure recorded in the 18 years Gallup has asked this question. Consequently, those who want labor unions to have less influence is at a record low of 28%. Thirty percent want unions to have the same influence as today.”

Trump's a New Deal-era conservative when it comes to work/labor. Respects the entrepreneur rather than the worker https://t.co/o2CHHblCLy

“On Labor Day — designated a federal holiday in 1894 to honor America’s labor movement — at least eight Democratic candidates will hold rallies in five Midwest cities to tell workers just how far the country has veered from its pro-labor roots,” reports Kira Lerner at Think Progress. “Each candidate will center their campaigns on their support for a $15 minimum wage, progressive health care, and pro-union policies.” At least two labor leaders are running for state-wide office. “Cathy Glasson, a registered nurse and union leader in Iowa who will officially announce after Labor Day her campaign for governor in 2018, said that before this year, she had never considered running for elected office…In Milwaukee, Wisconsin, Mahlon Mitchell, the president of the Professional Fire Fighters Association of Wisconsin who announced his run for governor in July, will rally with workers at a hospital.”

“I realize that I come to Italy at a time when many are questioning whether America is still committed to remaining engaged in the world, to upholding our traditional alliances, and standing up for the values we share. I also realize — and there is no point in avoiding a little straight talk here — that this doubt has much to do with some of the actions and statements of our President.”

I keep thinking about what Trump's letter to his successor is going to be like. https://t.co/ttjLcYH3wy

He won’t have time to leave one, what with being dragged off in handcuffs.

Politico: “Democrats are in search of new leaders to take on Donald Trump, and Rep. Joe Kennedy could fit the bill. But it’s not clear he wants the job. In short order, Kennedy has garnered a loyal grassroots following with a series of viral speeches challenging Trump on everything from health care to hate speech, leading some Democrats to believe he could help fill the party’s leadership vacuum.”

“It’s a shift for someone who, despite his famous last name and wavy red mane, has kept a low profile on the national scene since being elected to the House in 2012. Loath to be seen as a political celebrity, the 36-year-old from the outskirts of Boston has put in the work of a relative back-bencher and focused on delivering for his district. … Kennedy has already proven he has the ability to harness his star power, after gaining national prominence for blasting GOP efforts to dismantle Obamacare earlier this year.”

(THREAD) The Trump-Miller letter, reported by THE NEW YORK TIMES Friday, may have a PROFOUND impact on the Russia probe. Read on to see why. pic.twitter.com/NujziDZgrU

Getting the federal funds to assist the victims of Hurricane Harvey may turn out to be a longer process than some were anticipating. Treasury Secretary Steve Mnuchin said the administration wants Congress to attach the aid funds to a bill that would increase the federal debt limit without any spending cuts. The move amounts to the opening salvo in what could end up being a drawn out fight with an influential group of House conservatives who have warned against pursuing this strategy.