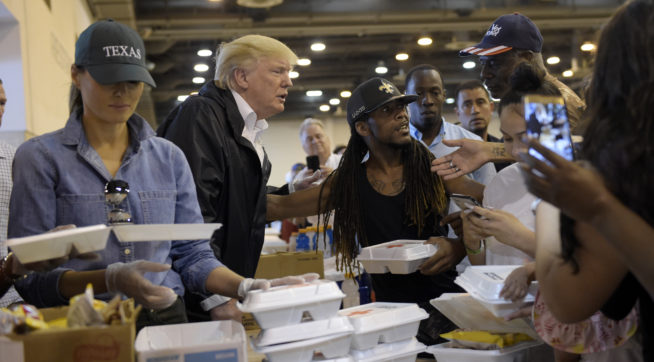 President Trump went down to Texas for the second time in less than a week on Saturday and took an entirely different approach, meeting directly with victims of Hurricane Harvey after he was criticized for keeping them at arm’s length during his Tuesday visit. This time he kissed children, shook hands, snapped selfies, passed out meals, and talked to people who had been directly affected by the storm. He also praised the recovery efforts. “It’s been done very efficiently, very well,” Trump said of the recovery. “We’re very happy with the way everything’s going. Lot of love.”

President Trump on meeting Harvey victims: "We saw a lot of happiness… As tough as this was, it's been a wonderful thing" pic.twitter.com/7r1QFDFJOJ

This is what you say to people who have lost everything?   Yes, the good samaritan nature of the American people is great to see, but the survivors in these shelters still need to be empathized with.  They need to feel that their tragedy and struggle is understood.  They don’t need to be forced to agree that the rescues were great.

Josh Marshall: “People with certain autism spectrum disorders have difficulty reading social cues which most people understand intuitively. Therapists have developed techniques which can help them learn through training what comes effortlessly to others. I can’t help thinking of this when I see President Trump touring Texas with his litany of jarring, tone-deaf or just plain weird comments. But the deficit in this case isn’t social cue cognition. It’s empathy.

There is, of course, a word for people who have an extreme inability to feel empathy: sociopath. It can also be certain diagnoses of what is called ‘malignant narcissism.’ But even that isn’t quite what gets my attention. Because many sociopaths are actually quite adept at demonstrations of empathy. They don’t feel it. But they can mimic the behavior. That’s what gets me. Trump can’t even pretend. Even your garden variety jerk politician can put on a show of hugs and supportive words. Trump can’t.”

On a Friday afternoon before a three-day holiday weekend, “the Justice Department said in a court filing […] that it has no evidence to support President Trump’s assertion in March that his predecessor, Barack Obama, wiretapped the phones in Trump Tower before last year’s election,” CNN reports.  Trump’s claims in March that “Obama had my ‘wires tapped’ in Trump Tower just before the victory” have long been seen as utter nonsense, and in a court filing the Justice Department confirmed that’s exactly what they were.

Second Utah police officer placed on paid leave as authorities investigate use of force in a nurse's arrest. https://t.co/0Yi9PJ8Ssj

“North Korea carried out its sixth and most powerful nuclear test in an extraordinary show of defiance against President Trump on Sunday, saying it had detonated a hydrogen bomb that could be mounted on an intercontinental ballistic missile,” the New York Times reports.

“The test, which the North called a ‘complete success,’ was the first to clearly surpass the destructive power of the bombs dropped on the Japanese cities of Hiroshima and Nagasaki in World War II.”

Washington Post: “Even if Kim Jong Un’s regime is exaggerating its feats, scientific evidence showed that North Korea had crossed an important threshold and had detonated a nuclear device that was exponentially more powerful than its last — and almost seven times the size of the bomb that destroyed Hiroshima.”

Martin Longman says Trump’s month of Hell has just begun: “As Trump lashes out like a badger in a burlap sack, his attacks are not suited to his challenges. He threatens to force a government shutdown if he doesn’t get funding for his border wall, but he has absolutely no plan for getting the votes he’d need from Democrats to get his money. He doesn’t know how he’s going to get the debt ceiling raised or whether or not he should attach it to disaster relief. He doesn’t even have a theory of where the votes will come from or what he might need to trade for those votes.  He says that he still wants Obamacare repealed but doesn’t understand that the opportunity to do that will end the moment the Republicans pass a new budget aimed at enacting tax reform. He senses that he’s completely blocked legislatively and calls for an end of the Senate’s filibuster, not realizing that he doesn’t and never will have anywhere near the votes he needs to make that change.

This is how September is beginning for the president.  Lord knows how it will end.”

The president is a hard man to serve.  And it sounds like General John Kelly has had just about enough.   “President Trump was in an especially ornery mood after staff members gently suggested he refrain from injecting politics into day-to-day issues of governing after last month’s raucous rally in Arizona, and he responded by lashing out at the most senior aide in his presence.  It happened to be his new chief of staff, John F. Kelly.

Mr. Kelly, the former Marine general brought in five weeks ago as the successor to Reince Priebus, reacted calmly, but he later told other White House staff members that he had never been spoken to like that during 35 years of serving his country. In the future, he said, he would not abide such treatment, according to three people familiar with the exchange.”

If Kelly goes, I can’t see how Trump survives it.  Kelly was treated as the Great Last Hope by the media, a savior meant to right the floundering Trump ship of state.   If he goes in less then three months, the narrative would have to be that Trump is not controllable, and is a horrible man to serve or work for, and that the only way to fix it is to remove the President.

President Trump is considering withdrawing from the U.S.-Korea Free Trade Agreement, sources tell Axios. “Administration sources have cautioned that no decision has been made, but the leaking of these deliberations has startled many in the U.S. business and pro-trade communities, who were under the impression that KORUS withdrawal was not in the cards for 2017.”

“More than $100 billion of annual trade between U.S. and Korea in goods — and billions more in services — hangs in the balance as Trump weighs this decision. Withdrawing from the trade deal would also damage relations between the U.S. and a key ally in Asia at the same moment the North Korean threat is escalating to historic proportions.”

"You have a choice Houston, starve to death…or eat vegan."
(ENTIRE CITY OF HOUSTON TAKES A BIG SWIG OF WHISKY)
"I'll see you in hell." pic.twitter.com/zAN2KoPHCo

“Top advisers crafting President Trump’s infrastructure plan say they aim to upend the way U.S. public works are financed, shifting the bulk of the decision-making and costs to states and cities and away from Washington,” the Wall Street Journal reports.

“The administration is proposing $200 billion in new federal funding as the central piece of its $1 trillion plan to improve the nation’s infrastructure. President Trump frequently cited the need for upgrades on the campaign trail.”

This church got flooded in Harvey. When the congregants saw the damage, they got to work. My story: https://t.co/gUjlLIyvHb pic.twitter.com/XBBBGlUVst

“The former Apprentice co-star—who currently serves as the communications director for the Office of Public Liaison—has seen her direct access to the president limited since Kelly took the top White House job in late July, sources tell the Daily Beast. In particular, Kelly has taken steps to prevent her and other senior staffers from getting unvetted news articles on the president’s Resolute desk—a key method for influencing the president’s thinking, and one that Manigualt used to rile up Trump about internal White House drama.”

“Multiple sources in and outside the Trump White House told The Daily Beast that, until recently, it was common practice for aides to slide into the Oval Office and distract and infuriate the president with pieces of negative news coverage. Manigault, they say, was one of the worst offenders.”

Kathleen Parker on the signal everyone should take from Harvey.   “In Houston during Harvey, the main force of the storm came from the skies, which dropped 9 trillion gallons (nearly 50 inches) of water onto the city, the flat topography of which gave residents an obvious advantage over New Orleans. Although cataclysmic over time, Houston’s flooding was less abrupt and gave people more time to find higher ground.

But make no mistake: We are being warned. Storms of the Harvey variety will become not 1-in-1,000-year events but 1-in-100. And then, well, who knows beyond worse-is-coming? The least we can do is exercise our free will — and our reasoning powers — to mitigate the effects of human activities on global warming to the extent possible.”

As the media fawns over Trump for handing toys to kids, I'm reminded of this extraordinary story about Obama: https://t.co/UyT9gBs4Jr

Nicholas Kristof on people who refuse to believe their own eyes.  “Imagine that after the 9/11 attacks, the conversation had been limited to the tragedy in Lower Manhattan, the heroism of rescuers and the high heels of the visiting first lady — without addressing the risks of future terrorism.

That’s how we have viewed Hurricane Harvey in Houston, as a gripping human drama but without adequate discussion of how climate change increases risks of such cataclysms. We can’t have an intelligent conversation about Harvey without also discussing climate change.

Frankly, it’s staggering that there’s still so much resistance among elected officials to the idea of human-caused climate change.  Last year was the third in a row to set a record for highest global average surface temperature, according to NASA. The 10 years of greatest loss of sea ice are all in the last decade. And poor Houston has suffered three “500-year floods” in the last three years.”