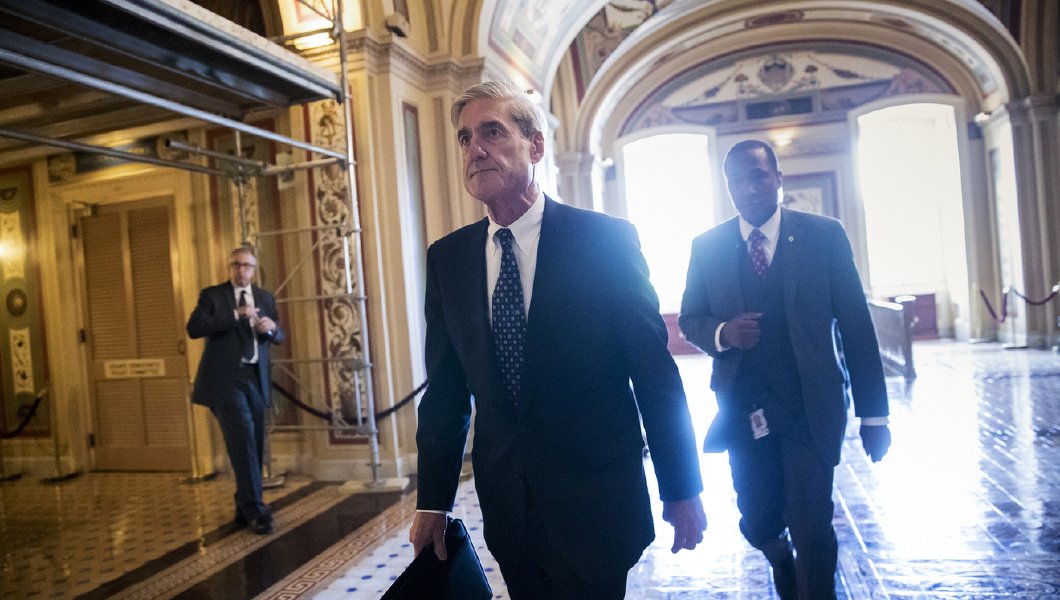 This has been a big week for Russia news.  Daily Beast: “Special counsel Bob Mueller has teamed up with the IRS. According to sources familiar with his investigation into alleged Russian election interference, his probe has enlisted the help of agents from the IRS’ Criminal Investigations unit.”

“This unit—known as CI—is one of the federal government’s most tight-knit, specialized, and secretive investigative entities. Its 2,500 agents focus exclusively on financial crime, including tax evasion and money laundering. A former colleague of Mueller’s said he always liked working with IRS’ special agents, especially when he was a U.S. Attorney.”

“And it goes without saying that the IRS has access to Trump’s tax returns—documents that the president has long resisted releasing to the public.”

Meanwhile, Paul Manafort’s notes from a controversial Trump Tower meeting with Russians during the 2016 presidential campaign included the word “donations,” near a reference to the Republican National Committee, NBC Newsreports

“The references, which have not been previously disclosed, have elevated the significance of the June 2016 meeting for congressional investigators, who are seeking to determine whether it included any discussion of donations from Russian sources to either the Trump campaign or the Republican Party.”

It is nightmarish to think of this guy as a DHS nominee.   And how the fuck does he get confirmed?

William Bradford, President Donald Trump’s appointee to lead the Energy Department’s Office of Indian Energy, resigned Thursday. CNN published a report on Tuesday about a commenting account that appeared to belong to Bradford and included disparaging comments about former President Barack Obama’s mother.  “Bradford tendered his resignation this afternoon and is no longer with the Department of Energy,” Energy Department spokesperson Shaylyn Hynes told the Washington Post.  The Washington Post in June reported on disparaging remarks Bradford made on Twitter, where he called Obama “a Kenyan creampuff” and called Facebook CEO Mark Zuckerberg a “little arrogant self-hating Jew.”

Treasury Secretary Steven Mnuchin told CNBC he would not commit to his predecessor’s pledge to remove President Andrew Jackson from the twenty-dollar bill and replace him with Harriet Tubman. Said Mnuchin: “People have been on the bills for a long period of time. This is something we’ll consider; right now we have a lot more important issues to focus on.”

Washington Post: “Friends used to be able to call the White House and be patched directly through to Trump; now those calls are routed through Kelly and do not always make it to the president. Friends used to drop by the West Wing when they had time to kill, wandering to the Oval Office to say hello; now they must have an official appointment — and a clear reason — to visit.”

“But Trump sometimes defies — and even resents — the new structure. He has been especially sensitive to the way Kelly’s rigid structure is portrayed in the media and strives to disabuse people of the notion that he is being managed. The president continues to call business friends and outside advisers, including former chief strategist Stephen K. Bannon, from his personal phone when Kelly is not around, said people with knowledge of the calls.”

Atlanta-area cop put on desk-duty after being caught on dashcam saying: “Remember? we only kill black people.” pic.twitter.com/fY7Om1Bfat

He will now be fired, as well he should.  You know whose job doesn’t matter?  Racist dirty police officers.

“The Trump administration plans to deeply cut Obamacare outreach and advertising,” Vox reports.  “They will reduce Obamacare advertising spending 90%, from the $100 million that the Obama administration spent last year to $10 million this year, and cut the budget for the in-person enrollment program by 41%.”

“Taken together, this represents a 72% cut to efforts to enroll eligible Americans into health law programs.”

“President Trump could trigger a furious response from corporations and some members of his own staff if he green-lights a plan under consideration at the White House to end DACA, the Obama-era policy that suspends deportation of some undocumented workers who arrived as children,” Mike Allen reports.

“I’m told some top CEOs, including leaders in tech and retail, plan to be tough and vocal if Trump ends the policy. But they’re keeping quiet for now because they fear antagonizing him on a question that could have massive implications for their workforces.”

President Trump’s “tax plans hardly match his populist rhetoric. Though he sold his plan to rewrite the tax code as a boon to the average American worker in a speech Wednesday, he mostly focused on the taxes paid by America’s largest corporations,” Politico reports.

“Trump argued that his plans to cut the 35 percent corporate tax rate for the first time in 30 years would benefit regular wage earners by putting more money in corporate coffers, which he said business leaders would then use to hire more people and raise wages.”

“But most economists say companies’ shareholders would be the primary beneficiaries of a corporate tax rate cut. That’s because it would make companies more profitable, which would boost their stock price while also leaving them with more money to pay out dividends.”

This is how much hotter the world has gotten since 1880 ⬇️ pic.twitter.com/gfNtvnxvim

The Texas state legislature is running into a lot of opposition from the courts on their racist laws (i.e., voter suppression and gerrymandering).  Now a A federal judge in Texas has temporarily blocked parts of a severe state immigration law that was supposed to take effect Friday and would have outlawed sanctuary cities and penalized local officials who do not cooperate with federal deportation efforts.

“In a 94-page decision, [U.S. District Court Judge Orlando] Garcia wrote that parts of the Texas law are likely to be found unconstitutional. He enjoined the state from punishing local officials, infringing on their right to free speech and forcing them to detain immigrants for federal immigration officials, an act that is currently voluntary. And he wrote that cities and towns had provided “overwhelming” and “ample” evidence that cooperating with immigration officials will “erode public trust and make many communities and neighborhoods less safe” as well as harm the state economically.”

“Virtually no one in the United States believes that taxes on corporations and wealthy individuals should be cut. In one recent Gallup survey, just 9 percent of respondents said corporations paid too much in taxes, while 67 percent said they paid too little; for “upper income people,” those figures were 10 and 63, respectively.

But even these numbers fail to convey the dearth of public demand for the Republican Party’s tax “reform” effort. Voters don’t merely lack enthusiasm for cutting taxes on the rich and powerful — most don’t even see a need for their taxes to be cut. In April, Gallup found 61 percent of Americans saying that their current income-tax burden is “fair” — the highest that figure has been at any point since 2009. Meanwhile, even those who believe that they deserve a tax cut don’t (generally) see such a measure as worth prioritizing: Last month, a Bloomberg poll found that less than 5 percent of Americans believe tax policy is the “most important issue facing the country” — less than half the percentage that picked climate change.

And this common wisdom has much to recommend it. America’s wealthiest have already hoarded three decades’ worth of economic growth; America’s effective corporate tax rate is already competitive with those of other nations. Meanwhile, we’ve got to finance the growing costs of the baby boomers’ mass retirement; restore the nation’s decaying infrastructure; and, now, rebuild our fourth-largest city. The notion that Congress should make “dramatically reducing federal revenue so as to increase the post-tax income of the one percent” it’s top priority is so indefensible, even tea party Republicans won’t argue forthrightly for their agenda. Donald Trump didn’t win the White House on a promise to cut taxes for the rich, but on a vow to raise wages for middle-income workers, while cracking down on “special interests” (and, ya know, do all that racist stuff).”

The level of detail in this story is remarkable. https://t.co/zOsdnMCY4P

From E. J. Dionne, Jr.’s column, “A Hurricane of Conservative Hypocrisy“: “…it is entirely appropriate to call out the hypocrisy of Texas conservatives who voted against assistance for the victims of Superstorm Sandy in New York and New Jersey but are now asking for federal help on behalf of their folks. They broke this basic rule of solidarity in the name of an ideology that, when the chips are down, they don’t really believe in. Of course we should help all the areas devastated by Harvey. I’d just appreciate hearing our Texas conservative friends, beginning with Sen. Ted Cruz, admit they were wrong.”