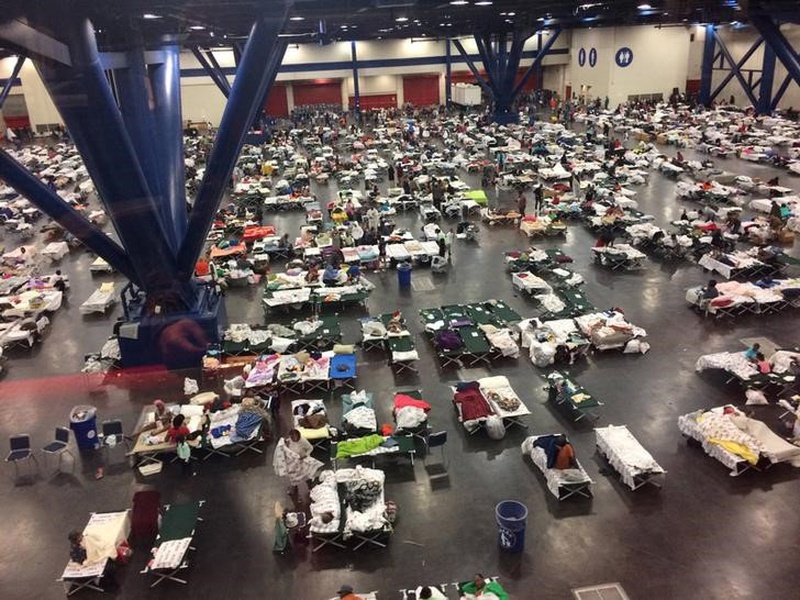 Harvey’s fatality count climbed dramatically on Wednesday according to local officials, with at least 38 deaths confirmed and suspected to be caused by the tropical storm as of writing. Twenty-eight of the deaths were in Harris County, the massively flooded area that encompasses Houston. The number has been continuously rising throughout the afternoon.

Playbook: “One of the new leading theories among Senate and House Republicans in Washington is that Congress will combine a three-month stopgap spending bill to keep the government open, the first installment of hurricane relief for Texas and Louisiana and an increase of the federal debt limit. The idea is this package would create an undefeatable constituency across the Capitol.”

That sounds relatively reasonable, but then the Associated Press is reporting that Republicans in Congress are reportedly moving to slash funding from the Federal Emergency Management Agency just as FEMA goes to work rebuilding Houston and the Texas coast from Hurricane Harvey.  Searching to pay for President Donald Trump’s border wall with Mexico, Republicans in the House are preparing to cut about $876 million out of FEMA’s total budget of $13.9 billion. The money cut from FEMA would cover about half of Trump’s “down payment” for the wall.

Further, Congress also has to pass a reauthorization of the Children’s Health Insurance Program (CHIP), which provides health coverage to millions of children in low-income families, by Sept. 30.  According to the Wall Street Journal, Republicans may attempt to use the CHIP deadline as a vehicle to revive their effort to chip away at the Affordable Care Act, and could try to attach amendments to the bill to reauthorize its funding.

Congressional sources told the Wall Street Journal that Republicans are in particular looking at linking a repeal of Obamacare’s medical device tax to CHIP. Other lawmakers are considering amendments that would stabilize Obamacare’s marketplaces, fearing that a standalone bill to do so would either not pass Congress or would draw a presidential veto.

So, Republicans in Congress are looking to slash FEMA by nearly a billion dollars to pay for the fucking wall, while Houston remains underwater.   And if that is not good enough messaging for you, then they want to hold children’s healthcare hostage for tax cuts.   I hope they all burn in hell when they die. If a Christian God is judging them at their end, they will.

NEW: Akhmetshin gave testimony under oath on August 11, in a sign Mueller is looking at the June 9 meeting.
https://t.co/8W7PKyGUbf

President Trump kicked off his sales pitch on tax reform Wednesday with a speech in Missouri that was woefully short of details and facts.   The Hill reports that the speech was “not expected to delve into policy details, including specific tax rates. Instead, Trump is expected to make the case for why he believes changes to the tax code are needed to give people a better chance of achieving the American Dream.”

Jonathan Swan: “Even though Trump’s early tax plans largely follow Republican orthodoxy — major, across-the-board tax cuts — he’ll be selling it like Huey Long. The way White House officials tell it, Trump will describe how he’ll ‘un-rig’ the economy, resurrect ‘Main Street’ and end ‘the special interest loopholes that have only benefited the wealthy and powerful few.’”

Washington Post: “Advocates hoped to build a steady drumbeat of support over the August recess. Instead, the cheerleader-in-chief spent the month ripping open a painful national wound over race while antagonizing his would-be Republican allies on Capitol Hill… A presidential signing ceremony this year now looks remote at best. One presidential address won’t repair the damage.”

Jonathan Chait: “Trump can pardon anybody facing charges from Mueller, but not from Schneiderman. It is probably significant that Mueller is letting this fact be known to Trump’s inner circle. Trump’s biggest source of leverage over Mueller just disappeared.”

A new NBC News-Survey Monkey poll finds 61% of Americans view President Trump unfavorably — with 48% saying they have a strongly unfavorable impression of him — as compared to just 36% who have a favorable view.

Also interesting: 60% of Americans think Trump did the wrong thing when he granted former Arizona sheriff Joe Arpaio a pardon and 34% said the President did the right think in granting Arpaio a pardon.

Bernie’s continues to shift to make himself more acceptable to party leaders in 2020 than he was in 2016.

Good.  Purity tests are not the way to win over people.  And to that end… look at this:

I intend to co-sponsor the Medicare for All bill because it’s just the right thing to do.

Thank you @KamalaHarris for your support. Let's make health care a right, not a privilege. https://t.co/hYbxTq8BVH

Sen. Kamala Harris (D-CA) announced at a town hall on Wednesday night that she’ll be co-sponsoring Sen. Bernie Sanders’s (I-VT) upcoming single-payer health care bill. Sanders’s staff is still putting the finishing touches on the legislation, but it is largely expected to resemble the one from his 2016 presidential campaign.   Most key 2020 contenders — including Sens. Elizabeth Warren (D-MA), Kirsten Gillibrand (D-NJ), and Corey Booker (D-NJ) — have said they support the idea of single-payer without necessarily backing Sanders’ bill or an existing bill. More than half of House Democrats now support Rep. John Conyers’s (D-MI) single-payer bill — a historic high.

Bloomberg: “Jared Kushner, Donald Trump’s son-in-law and top adviser, wakes up each morning to a growing problem that will not go away. His family’s real estate business, Kushner Cos., owes hundreds of millions of dollars on a 41-story office building on Fifth Avenue. It has failed to secure foreign investors, despite an extensive search, and its resources are more limited than generally understood.”

“As a result, the tower poses a significant challenge to the company. Over the past two years, executives and family members have sought substantial overseas investment from previously undisclosed places: South Korea’s sovereign-wealth fund, France’s richest man, Israeli banks and insurance companies, and exploratory talks with a Saudi developer, according to former and current executives. These were in addition to previously reported attempts to raise money in China and Qatar.

NEW: Fox News poll shows that 56% of registered voters believe that the President is tearing the country apart. pic.twitter.com/UaGQXFSGnx

A new Fox News poll finds just 36% of voters are happy with how things are going in the country — down 10 points since April — while 64% are dissatisfied.

Most interesting is that the shift “is not, as is often the case, tied to the economy. Positive views on the economy are higher than in more than a decade: 36% say it is in either “excellent” (6%) or “good” (30%) shape. The last time conditions were rated this positively was August 2004.”

President Trump’s “tax plans hardly match his populist rhetoric. Though he sold his plan to rewrite the tax code as a boon to the average American worker in a speech Wednesday, he mostly focused on the taxes paid by America’s largest corporations,” Politico reports.

“Trump argued that his plans to cut the 35 percent corporate tax rate for the first time in 30 years would benefit regular wage earners by putting more money in corporate coffers, which he said business leaders would then use to hire more people and raise wages.”

“But most economists say companies’ shareholders would be the primary beneficiaries of a corporate tax rate cut. That’s because it would make companies more profitable, which would boost their stock price while also leaving them with more money to pay out dividends.”

Jonathan Chait: “Donald Trump’s speech touting tax cuts — the largest ones ever, he promised — was devoted in large part to praise of the 1986 Tax Reform Act. ‘Our last major tax rewrite was 31 years ago,’ he said. ‘It was really something special … In 1986, Ronald Reagan led the world, cutting our tax base by 34 percent. Under this pro-America system, our economy just went beautifully through the roof.’”

“Trump has long attacked the 1986 Tax Reform Act as a disaster. The Act eliminated tax advantages for real estate, and Trump naturally equated the loss of special treatment for his own industry with harm for the economy as a whole. ‘This tax act was just an absolute catastrophe for the country,’ he told Congress in 1991. Eight years later, still fuming that Bill Bradley — a co-sponsor of the law — was running for president, Trump called it ‘one of the worst ideas in recent history.’”

Politico: “Interviews with six White House staffers and people close to the president attribute Trump’s shrinking West Wing to three factors: chief of staff John Kelly’s careful review process, which has led to the paring down of an organization that many inside have complained was top-heavy; the chilling factor of five open-ended Russia investigations hanging over the White House, making it hard to attract new talent; and the president’s own dark mood this summer, which has left him increasingly isolated and in the mood to hunker down, not hire up.”

Military Times: “Transgender troops can continue to serve pending a study and recommendation from Defense Secretary Jim Mattis, the Defense Department announced Tuesday. The DoD has received Trump’s memorandum on transgender service members and will implement the president’s policy direction, according to a prepared statement from Mattis.”

Philip Bump of the Washington Post says Trump has lost more than a fifth of his support since inauguration.

“A lot of attention has been paid to the core, fervent base of support that Trump enjoyed from the primaries through the general election. But he won because more-moderate Republicans who were iffy about him ended up voting the party line. They, like a number of independents, didn’t really like him, but they liked Hillary Clinton even less. That’s a problem because Trump has seen a big drop in support from precisely those groups. Republicans overall have shed 11 points of support for Trump — but moderate Republicans have dropped 17 points since January.”

Will Bunch at Philly.com on the day that the ‘enemies of the American people’ helped save America

“The loud and angry chant that had filled an Arizona convention center, egged on, remarkably, by the 45th president of the United States — “CNN sucks! CNN sucks!” — was still ringing in many people’s ears when the first scattered pellets of rain began falling on Houston. By Sunday afternoon, politics was almost forgotten as millions of Americans sat glued to their TVs watching the devastation from Hurricane Harvey and a flood that looked like it was something out of a Bible-school coloring book, the rising waters gradually and inexorably obliterating much of the nation’s fourth largest city. Into the eye of this apocalypse rode cops, wildlife officers, everyday Joes or Janes with little more than some gumption and a Mercury outboard motor, and, yes, an army of journalists.

Or, as we rarely call them these days, human beings.”