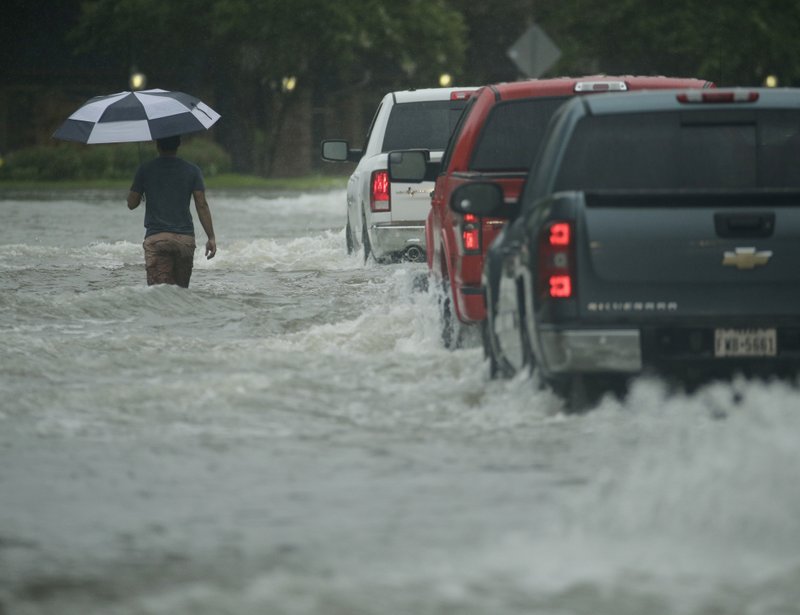 Houston woke up to catastrophic flooding on Sunday and emergency crews struggled to keep up with rescue operations. But the commander in chief seemed to have something else on his mind when he woke up—his buddy’s book. As rescue workers scrambled to get hundreds of people out of harm’s way, President Donald Trump plugged the book of controversial Milwaukee County Sheriff David Clarke. “A great book by a great guy, highly recommended!” Trump tweeted, sharing a post by Clarke.

The president then switched topics yet again and appeared to remember another pending trip, noting that he’ll be going to Missouri, where, lest you forget, “I won by a lot in ’16.”  Then Trump talked up the need for a border wall and vowed that “Mexico will pay for it through reimbursement/other.”  All while Houston drowns.

While Donald Trump ran for president, his company was pursuing a plan to develop a Trump Tower in Moscow https://t.co/ohLYyLtpxL

“While Donald Trump was running for president in late 2015 and early 2016, his company was pursuing a plan to develop a massive Trump Tower in Moscow, according to several people familiar with the proposal and new records reviewed by Trump Organization lawyers,” the Washington Post reports.   “As part of the discussions, a Russian-born real estate developer urged Trump to come to Moscow to tout the proposal and suggested he could get President Vladimir Putin to say ‘great things’ about Trump.”

“The details of the deal, which have not previously been disclosed, provide evidence that Trump’s business was actively pursuing significant commercial interests in Russia at the same time he was campaigning to be president — and in a position to determine U.S.-Russia relations.”

Stan Collender says there’s a 60 % chance of a government shutdown because there are actually seven different power groups in the Republican party.  “Trump’s political needs and goals are different from almost every congressional Republican. Not only is he not up for reelection in 2018, his base of supporters is very different from that of most GOP representatives and senators. As the Affordable Care Act debacle amply demonstrated, what’s politically correct for Trump sometimes isn’t even close to what’s right for many others in his party…and continued funding for the federal government and the debt ceiling are two of those times.”

“Trump also continues to refuse to accept that Congress is not a wholly-owned subsidiary of his presidency. His ongoing attacks on individual Senate Republicans for not doing what he wants on health care, the wall, the debt ceiling, the Russia sanctions law and the collusion-with-Russia investigation undeniably shows that he considers the House and Senate to be subservient divisions of Trump Administration, Inc. rather than the equal partners created by the U.S. Constitution. The existence of these seven Republican groups all point directly to legislative and political chaos and perhaps an explosion in September on the shutdown and debt ceiling.”

In Oval Office meeting, Trump told Kelly: "I want tariffs. And I want someone to bring me some tariffs."https://t.co/BFGrv6OyGe

“I know there are some people in the room right now that are upset. I know there are some globalists in the room right now. And they don’t want them, John, they don’t want the tariffs. But I’m telling you, I want tariffs.”  — President Trump, quoted by Axios, in an Oval Office discussion with chief of staff John Kelly and others

Jonathan Swan: “There’s a ticking problem with Rex Tillerson, and it’s growing louder by the day, according to officials inside and close to the White House.  President Trump has been growing increasingly frustrated with his Secretary of State. One time recently, after Trump had returned from a meeting on Afghanistan, a source recalled Trump saying, ‘Rex just doesn’t get it, he’s totally establishment in his thinking.’  Tillerson’s jaw-dropping comments on TV today will likely only worsen their relationship.”

#Houston Hang on. The CAJUN NAVY is already activated and on the way. pic.twitter.com/O6NYOsmXL4

Aaron Blake: “I wouldn’t be the first to note that it seems, well, counterproductive to attack your own party’s leaders. It’s entirely possible that this is Trump simply trying to motivate his team in his own divisive, Trump-ian way. It’s also possible he’s just lashing out and doesn’t actually have a plan. But there’s also an Option C here. What if Trump, fed up by a lack of progress and fealty, is ready to take on his own party? What if, having systematically attacked what seems like every other institution involved in American government — the judiciary, the intelligence community, the press, the election process, law enforcement, Congress — he’s now set to attack and undermine the institution whose nomination he commandeered to obtain the presidency? What if he simply ditched the Republican Party, either officially or in spirit?”

The Berners are trying to rig the system.  No Deal.  Eliminate all caucuses and have semi-open primaries (where you have to register as a Democrat to vote in the primary but the registration deadline can be close to or on Primary election day).

Mike Allen: “Until now, most Republicans on the Hill have either backed Trump, or mostly stayed silent about their differences. Now, he’s being openly defied. After the President has spent weeks seemingly divorcing himself from the GOP — openly blaming Mitch McConnell for healthcare’s failure and pre-blaming McConnell and Ryan for debt-ceiling headaches — many feel liberated to speak their minds.”

“All that will hamper Trump’s ability to help muscle tax reform through Congress. But the endgame is Special Counsel Bob Mueller… Trump’s attacks on McConnell are self-defeating for a lot of reasons. But if Mueller ever makes an impeachment referral (like the Watergate special counsel did), Trump needs McConnell more than anyone in the world.”

Dan Balz: “President Trump has set his presidency on an unambiguous course for which there could be no reversal. He has chosen to be a divider, not a uniter, no matter how many words to the contrary he reads off a teleprompter or from a prepared script. That’s one obvious message from Friday’s decision to issue a pardon for controversial former Arizona sheriff Joe Arpaio.”

“Trump has been a divisive force from the very start of his campaign for president, a proud disrupter of the political status quo. His swashbuckling contempt for political correctness and the rules of the game endeared him to millions of Americans who were fed up with Washington, with career politicians, with liberal elites and with the mainstream media. The more he is under fire — as he is now — the more he returns to that strategy.

Special counsel Robert Mueller “is examining what role, if any, former national security adviser Mike Flynn may have played in a private effort to obtain Hillary Clinton’s emails from Russian hackers,” the Wall Street Journal reports.

“The effort to seek out hackers who were believed to have stolen Mrs. Clinton’s emails… was led by a longtime Republican activist, Peter W. Smith. In correspondence and conversations with his colleagues, Mr. Smith portrayed Mr. Flynn as an ally in those efforts and implied that other senior Trump campaign officials were coordinating with him… He also named Mr. Flynn’s consulting firm and his son in the correspondence and conversations.”

“This is the first public indication that Mueller’s investigation is beginning to compel witness testimony before the grand jury — a significant milestone in an inquiry that is examining the conduct of President Donald Trump and his son-in-law, Jared Kushner, among others.”

“It is also further indication that Manafort, Trump’s onetime campaign chairman, could be in serious legal jeopardy.”

Trump's long interest in Arpaio's case is a bad sign for his regard for rule of law https://t.co/WG8uJCqSKi

Aaron Blake reports that “President Trump’s own pollster just confirmed his base is cracking” at The Fix. As Blake notes, “Trump’s own pollster just shared data showing 1 out of every 4 Republicans (25 percent) disapprove of Trump — a number that has increased by 6 percentage points since June. If that’s not losing your base, I’m not sure what is. Does it mean the base has completely deserted him? Of course not. But it shows the steady deterioration from other polls is confirmed by Trump’s own pollster. And it sure as heck rebuts Trump’s recent claim that his base is “stronger than ever.”

You won’t regret taking the time to read this no-BS manifesto by Joe Biden, all the more relevant hurricane newshttps://t.co/SpbMGAzlyg