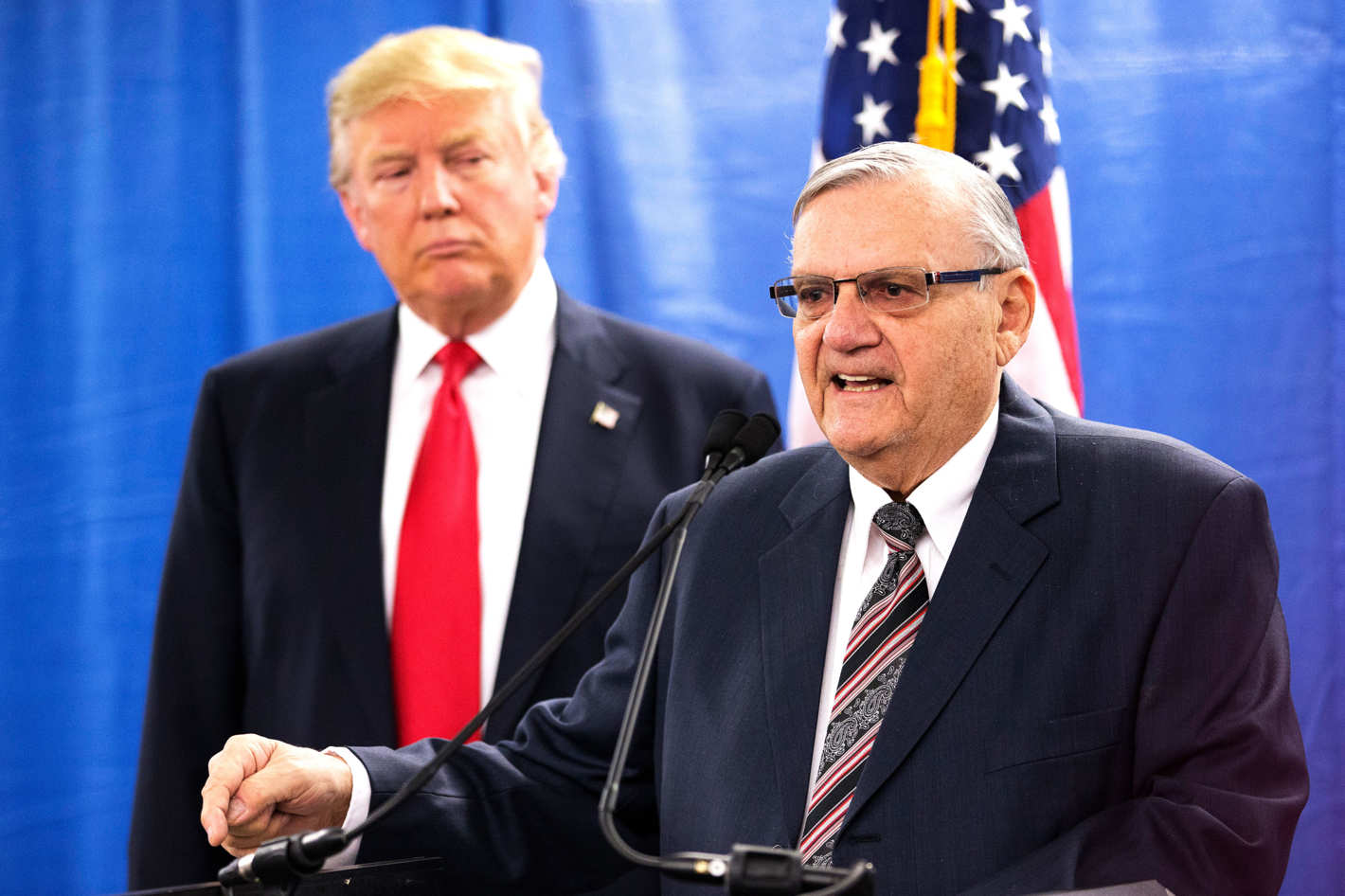 So on a Friday night when the nation has its attention on a rapidly intensifying category 4 major Hurricane making landfall, the coward Nazi serving as our President pardoned his fellow racist birther felon former Sheriff Joe Arpaio and issues an official order banning transgender troops from serving in the military.

“President Trump pardoned Joe Arpaio, the former Arizona sheriff whose aggressive efforts to hunt down and detain undocumented immigrants made him a national symbol of the divisive politics of immigration and earned him a criminal contempt conviction,” the New York Times reports.

In a two-paragraph statement, the White House said that Mr. Arpaio gave “years of admirable service to our nation” and called him a “worthy candidate for a presidential pardon.”

Washington Post: “Trump’s pardon came late on a Friday night, at a time when much of the country is focused on a Category 4 hurricane bearing down on Texas. Hurricane Harvey is the most powerful such storm to hit the nation in 12 years.”

President Trump has directed the military not to move forward with an Obama-era plan that would have allowed transgender individuals to be recruited into the armed forces, following through on his intentions announced on Twitter a month earlier to ban transgender people from serving.

The presidential memorandum also bans the Department of Defense from using its resources to provide medical treatments for transgender individuals currently serving in the military. Trump also directed the departments of Defense and Homeland Security “to determine how to address transgender individuals currently serving based on military effectiveness and lethality, unitary cohesion, budgetary constraints, applicable law, and all factors that may be relevant,” a White House official said.

The official signaled that the administration was returning to the military’s pre-2016 policy under which no transgender individuals were allowed to serve openly in the armed forces, but said Trump was giving the secretaries of defense and homeland security leeway to determine the policy on currently serving transgender troops.

President Trump “escalated his attacks on congressional Republicans on Friday, targeting Sen. Bob Corker (R-TN), a frequent ally who was also among the most vocal critics of the president’s remarks in response to the violence two weeks ago in Charlottesville,” the New York Times reports.  “The president’s early-morning tweet appeared to suggest that Mr. Corker was in political trouble in his home state.”

“It was not immediately clear what conversation Mr. Trump was referring to, or what provoked him to attack Mr. Corker more than a week after the senator said the president ‘has not yet been able to demonstrate the stability, nor some of the competence that he needs to demonstrate in order to be successful.’”

At the Republican National Convention, Donald Trump made some pretty big claims: “I have joined the political arena so that the powerful can no longer beat up on people that cannot defend themselves. Nobody knows the system better than me, which is why I alone can fix it.”

Jonathan Chait: “None of those claims have turned out to be true. First, helping the powerful beat up on the defenseless has turned out to be the overriding thematic goal of his agenda. Second (and mitigating the first), everybody knows the system better than Trump — at least everybody in politics. And he has proven so unable to fix it he is already shifting his message toward assigning the blame elsewhere.”

“Trump is encountering the classic populist dilemma. Populists define political problems as very simple, denying the existence of complex tradeoffs. They envision the political system as pitting a unified people (or, in certain herrenvolk varieties of populism, as a unified racial subset of the people) against a nefarious elite. The dilemma is that the promise of easy solutions can help win an election, but it does not translate into governing. Populists generally either radically depart from their platform, resort to authoritarianism to consolidate their power, or fail. Trump is heading for door no. 3.”

If Trump isn't bluffing here, there's only one option, and GOP leaders are terrified of it. https://t.co/bCXmBB7LOQ

Federal Reserve Chairwoman Janet Yellen “offered a forceful defense of broad new banking regulations enacted after the 2008 financial crisis, saying the rules safeguard the economy against another crisis and rejecting assertions from President Trump and top aides that they should be rolled back,” the Washington Post reports.

Politico: “The Fed chief’s remarks are implicitly a pitch of how she would lead the central bank if President Trump chose to keep her at the helm of the Fed; the 71-year-old economist’s term as chair ends at the beginning of February.”

https://t.co/wDmig543rG isn't imploding. All counties in US have insurance for enrollees.https://t.co/LrboBS9o5S

“President Trump handed Democrats a gift this week with his vow to shut down the government if he doesn’t soon get money for his border wall. Democrats may be only too happy to let him follow through on his threat since it will now be easy for them to blame the president for any government interruption, which would probably aggravate many Americans,” the New York Times reports.

“Rather than cowing Democrats, Mr. Trump’s tough talk is more likely to embolden the opposition in ongoing negotiations, particularly since he has now twice suggested he was willing to shutter government agencies if he didn’t get his way.”

“It also puts more pressure on Republicans to find the votes internally to pass spending bills and an increase in the federal debt limit — two things hard-right conservatives in the House and Senate have refused to support in the past. That Republican resistance provides Democrats leverage — Republicans can either grant concessions such as no wall money or produce all the votes for the spending bills and debt limit increase themselves.”

This video may ultimately haunt the remainder of Trump's presidency. pic.twitter.com/SzV8i9ETGO

“President Trump is seriously considering ending DACA, the Obama-era policy that shields some illegal immigrants from deportation, before conservative state attorneys general file a court challenge to the program.”

“Sources familiar with the deliberations tell Axios that Trump has made no final decision, and the White House continues to receive advice from the Department of Homeland Security and the Department of Justice. Jeff Sessions strongly believes Trump should end DACA; DHS, however, has a more nuanced position, and Trump himself has said he’s sympathetic to the children helped by the program.”

“President Trump is strategically separating himself from Republicans in Congress, an extraordinary move to deflect blame if the GOP agenda continues to flounder,” the Washington Post reports.

“Trump deepened the fissures in the party on Thursday when he accused the top two leaders on Capitol Hill of mismanaging a looming showdown over the nation’s borrowing authority. Republican lawmakers and aides responded to the president’s hostility with broadsides and warnings of their own.”

“Frustrated by months of relative inaction across Pennsylvania Avenue and emboldened by his urge to disrupt the status quo, Trump is testing whether his own political following will prove more potent and loyal than that of his party and its leaders in both houses of Congress.”

“August was supposed to be the month that President Trump sold tax reform,” Politico reports.  “But with less than two weeks to go before Congress returns, and Republican leaders hoping to launch a major push to get tax legislation to the president’s desk by the end of the year, Trump has barely mentioned the subject.”

“Part of the month went to important foreign policy issues… But domestically he’s picked fights with the top Republican in the Senate, stewed over how his response to racially tinged violence in Charlottesville, Virginia, was received, and mused about shutting down the government over funding for a border wall.”

Matt Bai: “The current thinking goes, the administration seems to be in the hands of strong and serious-minded patriots who can fill in a map without help…  But even if these guys can keep Trump’s presidency from immediately derailing, that doesn’t mean they’re likely to steer it in the right direction.”

“When it comes to addressing the country’s problems and divisions in a thoughtful way, though, the only guy who can do that is the president himself, and I don’t see it happening, no matter how many square-jawed warriors surround him or how many slogans they latch onto. Trump’s the principal, and that’s the reality.”

Daily Beast: “The White House on Friday announced a new round of sanctions against Venezuela that explicitly exempt the U.S. arm of the country’s state-owned oil company. That company, Citgo, donated six-figure sums to Trump’s inauguration and recently hired former Trump officials to lobby for that exemption.”