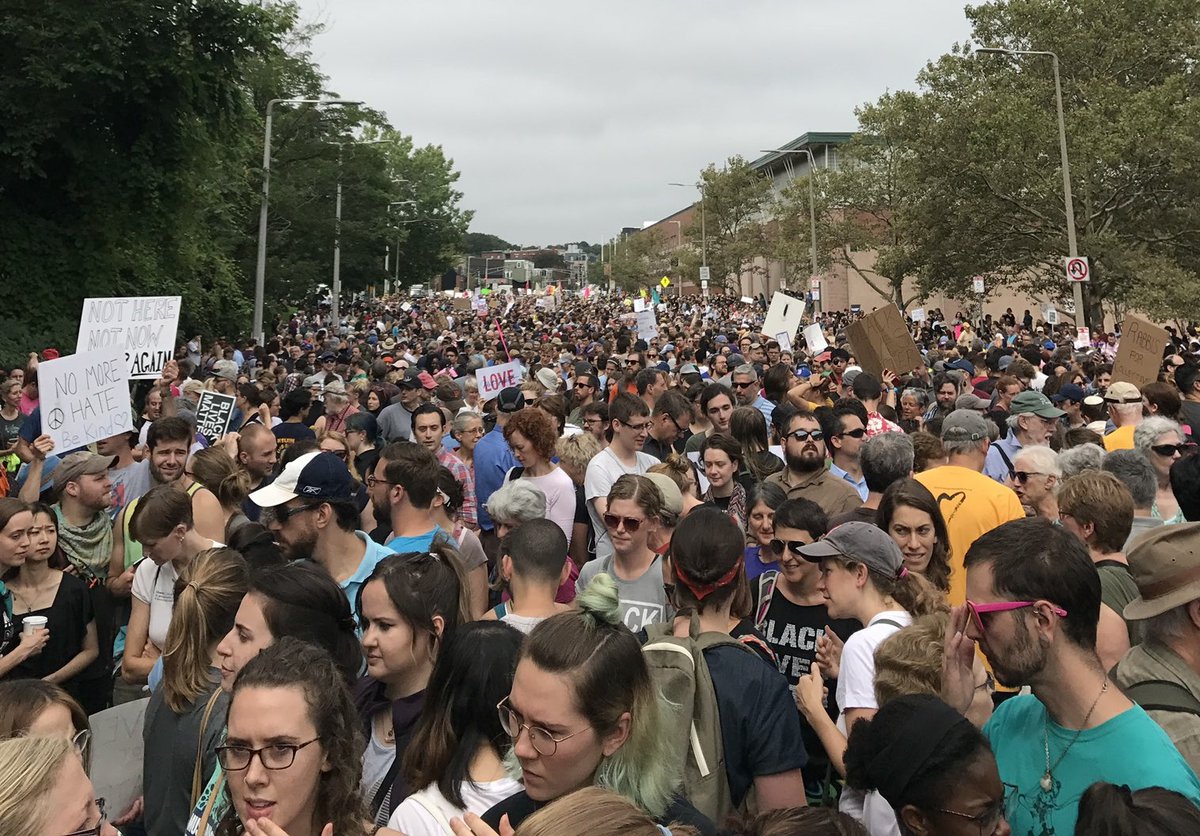 President Trump weighed in on the massive anti-white nationalist protest that took place in Boston on Saturday but it seems he had a bit of trouble getting his thoughts in order. His first instinct? Describe the 40,000 anti-fascist, anti-racist, largely peaceful demonstrators that descended on Boston on Saturday as “anti-police agitators” while law enforcement officers were “looking tough and smart!” Shortly thereafter he sent another tweet in support of the police and even the city’s mayor.

Among an estimated crowd of 40,000 protesters there were 27 arrests for disorderly conduct and some for altercations with police.  “99.9 percent of the people here were here for the right reasons and that’s to fight bigotry and hate for the most part here today,” Boston Police Commissioner William Evans said at a press conference Saturday.

He then sent out this tweet.  Well, he actually sent it out four times:

I am convinced that this is not a typo. He doesn’t want us to heal. He wants to us to heel. In order words, to compel us to obey; or to force someone into a submissive condition. This tweet, like 3 others preceding it, all with the spelling of heel, was deleted, as crazed staff finally got the President who has the best words to spell heal correctly.  But I believe he truly meant heel, and spelled it that way, three times, while he made other grammatical changes.   Remember, he is a dictator in his own mind.  He wants us all to bow down to his glorious leadership.

“Stephen Bannon’s ouster rids the White House of someone who fed off chaos, obsessed over his own image and sowed conflict among top aides to the president,” Bloomberg reports. “The problem is that many of Bannon’s most-damaging traits were merely an amplification of the man who continues to sit in the Oval Office.”

“Thirty weeks into his presidency, President Donald Trump has made clear that he’s unwilling or unable to abandon a management approach that pits staff against one another, openly antagonizes outside allies, and leaves little room for the painstaking work of governance.”

More from Chief Gross as he tells protesters to keep it positive, take their victory against hate. @7News pic.twitter.com/6yHpGPweCm

Josh Marshall: “[W]e seem to be moving rapidly toward a public consensus, or rather a consensus among prominent Republicans, that the President needs to apologize or at least clearly contradict his earlier statements. That’s the gist of what Mitt Romney is saying this morning, though I don’t want to overestimate how much significance Romney has in the current GOP and certainly not in Trump’s part of it. But of course Trump is constitutionally, psychologically incapable of apologizing. He may be willing to read out a statement through gritted teeth. But no more than that.  That kind of true shift of direction is beyond impossible for Trump. People are who they are. They don’t change.”

Ben Smith on the failure of the Bannon’s dreams of realignment:  “Bannon has a bizarre dual role as Trump’s ideologist: He’s the guy selling a new cross-racial coalition; and he’s the chief arsonist of that coalition, using racism as a kind of cultural token for anti-elite politics. The congressional coalition he imagines, in which Democrats cross the aisle to join Trump under the red flag of socialism, is now laughable. Trump has lost Ryan and McConnell without gaining Schumer and Pelosi. And the notion, after Charlottesville, of a cross-racial coalition requires imagining a president so deeply and dexterously committed to reconciliation that you are imagining a different human being.”

Here's a running list of Confederate monuments removed across the country https://t.co/jhIJ0oQiVk

Andrew Sullivan: “We know that even Trump’s belief that “fine people” marched alongside Nazi thugs in Charlottesville will not prompt Gary Cohn or James Mattis or Rex Tillerson or Kelly to resign. We know that even in that no-brainer context, almost no Republicans in Congress, including Paul Ryan, will criticize Trump by name. This incident in some ways inoculates Trump. If they let him survive this, they will let him survive anything.

Impeachment could make things worse, not better. If Mueller’s final indictment is not tightly connected to the president’s own collusion with Russia, but involves more general criminality in Trump’s business records or coterie, Trump would have an easy case to make to his base, and one he recently dusted off in his West Virginia rally. He could say that the Establishment is out to get him, and that impeachment is simply a way to nullify a fair election. Such a message will resonate. Even if a post-2018 House voted to impeach, I seriously doubt the Senate could find enough Republicans to reach the 66-vote threshold for conviction.

As for the solution offered by the 25th Amendment, this week was also instructive. If the cabinet cannot act after the president has destroyed America’s nuclear credibility and has claimed to have seen “fine people” marching alongside Nazis, they will never act. And again, this escape hatch is equally shut off by the populist maneuver — against the cabinet itself. We know, in other words, that these people will act only after a catastrophe has occurred, and not before.”

David A. Graham at the Atlantic says Donald Trump Is a Lame-Duck President.

“Just seven months into his presidency, Trump appears to have achieved a status usually reserved for the final months of a term.  Who knows when the lame-duck period began. Was it on January 21, when Trump’s administration tried to argue, against all evidence, that he had the largest inauguration crowd in history? Or the next day, when Kellyanne Conway introduced the world to “alternative facts”? Was it when Trump fired FBI Director James Comey? Was it the days-long slow reveal on Donald Trump Jr.’s meeting with a Russian lawyer in June 2016? Or did it come on Tuesday, when Trump stepped to a lectern in Trump Tower and delivered a strange de facto defense of white nationalism?

Whatever the turning point, thinking about Trump as a lame-duck president seems a better rubric for making sense of his administration than most. Consider the things that happen in a lame-duck period.”

“To further satisfy the president’s sudden desire for fact, it is essential to understand that the road to the Charlottesville attack was not traveled in a night, nor even a decade. Since 9/11, the uptick in terrorism has not come from foreign threats. Instead it is owed to homegrown terrorists, with significant surges in attacks in 2008 and 2012, coinciding with the election and re-election of Barack Obama, America’s first African-American president.

The New America Foundation reports an almost 2-1 ratio of attacks by far-right extremists over Islamist extremists. The Anti-Defamation League reports that from 2007 to 2016, a diverse collection of extremists was responsible for the deaths of at least 372 people in the United States; 74% of these murders came at the hands of right wing extremists. These trends are accelerating, rapidly. In an eight-day period in May, for example, there was a string of violent extremist incidents that received little media attention and, unsurprisingly, no condemnation from the president.”

Looks like President Trump has decided to break another Washington tradition. On Saturday, the White House said the president and first lady Melania Trump won’t be attending the annual Kennedy Center Honors in December “to allow the honorees to celebrate without any political distraction.” The move comes a few months after Trump decided to skip another tradition and not attend the annual White House Correspodnents’ Dinner.

Frank Rich:  “My own theory remains that this administration’s downfall began with the firing of James Comey, an unabashed attempt to obstruct justice in the Russia investigation. (Remember when that seemed shocking?) His downfall will culminate only when the GOP, in existential extremis, realizes that its choices are to leap from the Titanic or go down with the ship. As far as Republicans are concerned, the iceberg is not yet fully in view. Yes, the confirmation that an American president is a racist bully whose empathy is mainly reserved for either neo-Nazis or neo-Stalinists has prompted an uptick in public expressions of outrage by some GOP politicians, but words are toothless. These few rhetorical defections are not enough of a revolt to get us to the endgame — the endgame not being impeachment (never going to happen) but Trump’s implosion. No one is shrewder about Trump than his Art of the Deal co-author Tony Schwartz, and his summation after the Charlottesville events rings true to me: “The circle is closing at blinding speed. Trump is going to declare victory before Mueller and Congress leave him no choice.” […]

Republicans in Congress will be moved to mutiny not by Trump’s affection for white supremacists and Vladimir Putin but by polls that will hit new record lows as the midterms, now less than 15 months away, draw closer. In keeping with Schwartz’s prognostication, the blinding speed may be hastened by other developments: a Trump effort to fire Mueller (inevitable, I think, no matter what a Lindsey Graham or Orrin Hatch may have to say about it); the spike in health-care premiums because of the Trump administration’s sabotaging of Obamacare; and the potential collapse of governance altogether as a divided GOP fails to raise the debt ceiling or pass a budget, let alone deliver on promises of dramatic tax cuts and a trillion-dollar infrastructure push.”

Wow! Line of residents in Durham, NC attempting to turn themselves in for 'crime' of removing Confederate Monuments