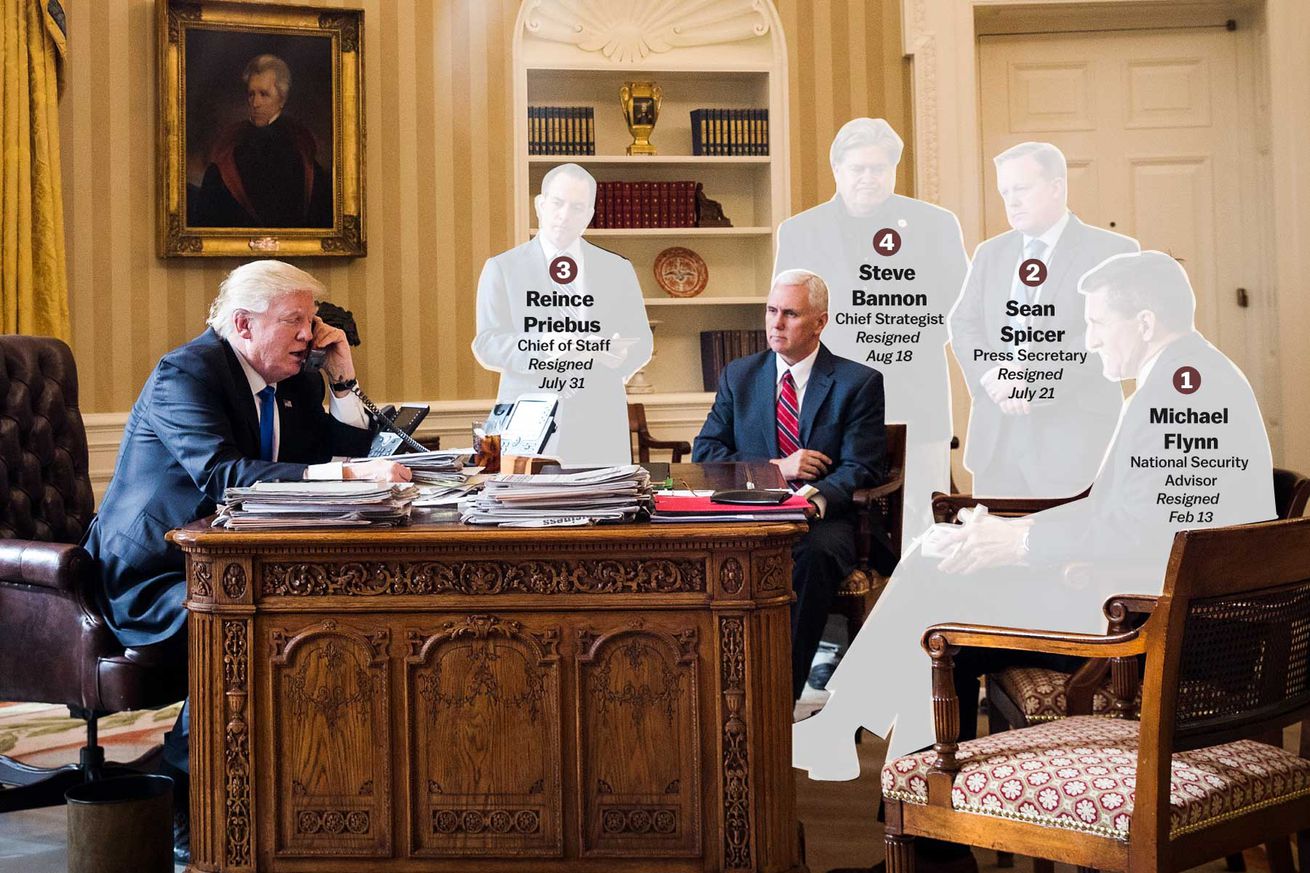 President Trump “has told senior aides that he has decided to remove Stephen Bannon, the embattled White House chief strategist who helped Mr. Trump win the 2016 election,” the New York Times reports. “The president and senior White House officials were debating when and how to dismiss Mr. Bannon. The two administration officials cautioned that Mr. Trump is known to be averse to confrontation within his inner circle, and could decide to keep on Mr. Bannon for some time.”

Jonathan Swan: “Steve Bannon’s next moves will be all about the billionaire Mercer family. I’m told Bannon, who visited New York this week, met with Bob Mercer and together they will be a well-funded force on the outside.”

“Bannon has felt liberated since it became clear he was being pushed out, according to friends. He’s told associates he has a ‘killing machine’ in Breitbart News, and it’s possible he returns to lead their editorial operation.”

“A source familiar with Breitbart’s operations told me they would go ‘thermonuclear’ against ‘globalists’ that Bannon and his friends believe are ruining the Trump administration, and by extension, America.”

Washington Post: “The potential for Bannon to wreak havoc and mischief on the White House from the outside is among the reasons Trump had been skittish about firing his chief strategist. And Bannon himself had used wartime metaphors to signal to friends and confidants that he would continue to pursue his nationalist, populist agenda if he leaves his government perch.”

Ousted White House strategist Stephen Bannon said a new phase of the Trump presidency will now begin and it will likely be “less willfully disruptive,” the Weekly Standard reports.

Bannon also confirmed that he will return to the helm of Breitbart, “the rambunctious right-wing media enterprise he ran until joining the Trump campaign as chief executive last August.”

MaryAlice Parks: “Left alone and shunned this week, President Trump has taken to screaming and lobbing insults at folks from his Twitter account as they turn their backs and head for the door. Isolated, he has retreated to extreme nativist and racially charged language. He began Thursday, verbally spitting on two Republican lawmakers, an astounding move considering that, despite their rebuke of his recent comments, party members remain some of the only potential allies he has left. Hours later, Trump doubled-down on his defense for Confederate statues, echoing phrases used by white nationalists over the weekend about the country’s ‘culture’ being under attack.”

“He ended the day tweeting a discredited legend about a World War I-era U.S. general’s killing Muslims with bullets dipped in pig’s blood. The timing appeared to be in reference to the attack in Barcelona, begging the question: Was the president of the United States suggesting that tactic? This week has arguably been the worst in his presidency and has left members of his party unsure how to pick up the pieces.”

“Democrats are throwing the kitchen sink at President Trump to protest his ongoing equivocation about a white nationalist rally and put increasing pressure on Republican leaders to denounce their party’s standard-bearer in the White House,” The Hill reports.

“No tool has been overlooked. The Democrats have sent letters, called for hearings, launched campaign ads and promised resolutions of censure and impeachment designed to highlight the firestorm set off by the deadly protests in Charlottesville, Va. — and the president’s equivocal response.”

“The episode has forced congressional Republicans into a defensive crouch, caught between condemning the racist groups which organized the Charlottesville protest while taking pains not to rebuke the president, whose support they need to move the ambitious legislative agenda they’ve planned to finish before the year’s end.”

How Democrats can get Trump to enact a carbon tax https://t.co/3bjqt40CAs pic.twitter.com/sGIFuBRxj8

Goldman Sachs believes there is a 50% chance that the federal government will experience a short shutdown next month, CNBC reports.

From the statement: “Presidential approval continues to decline, and is the lowest for any first-term president in his first year in office. Low approval ratings raise legislative risks. In the near term, we believe there is a 50% chance of a brief government shutdown, as the president seeks to solidify support among his base by embracing more controversial positions.”

Mitt Romney has excoriated President Trump for his equivocating response to the violence in Charlottesville and urged him to apologize or risk subjecting the country to “an unraveling of our national fabric,” the New York Times reports.

Said Romney: “Whether he intended to or not, what he communicated caused racists to rejoice, minorities to weep, and the vast heart of America to mourn. His apologists strain to explain that he didn’t mean what we heard. But what we heard is now the reality, and unless it is addressed by the president as such, with unprecedented candor and strength, there may commence an unraveling of our national fabric.”

Donald Trump is losing control of his administration, and he likes it that way: https://t.co/RJp0EKjAsI

Erick Erickson got an interesting tidbit he got from a “senior Republican Congressman.”

“You could hear the frustration in his voice. “He [Trump] just can’t shut up…. And we go home and everybody blames us for what’s going on. I don’t think the people on TV understand that most people still hate us more than him, but he’s making it even harder. We may be the turd in the field, but he’s the worm in the turd.”   […]

Here’s the big thing though. With all the frustration the congressman says there are no grounds to impeach the President. The consensus, even among senior Democrats, is that impeachment cannot be done just because the President is an idiot or a sympathizer of white supremacists. There must be a crime and right now there is no sign. “I hate to say it, but some of us would really like Mueller to find something we can use,” he said. I asked if he was one of those and all he said was “maybe.”

And this is from a guy who publicly tries to defend the President.”

Olivia Nuzzi: “What happens inside of the Trump White House now is not yet as clear as what will happen outside of it. In just a few weeks, Trump has isolated himself by purging his inner circle of figureheads of the establishment and the nationalist right. What’s left are his family members, some Republicans, and a curiously substantial number of Democrats.”

“The president is prone to making the following observation: ‘I’m the fucking president.’ He believes his power is total, and that it will exist even if everyone around him ceases to. But those close to him recognize that the Republican National Committee still has the ability to exert influence among conservatives, and fear what humiliated RNC alums Sean Spicer and Reince Priebus could do. And now on the other flank, there is anxiety about how Breitbart and the alt-right more broadly will react to the latest news.”

The White House “took the unusual step of saying that National Economic Council Director Gary Cohn would not resign, trying to contain the fallout from President Trump’s controversial comments about the deadly riot in Charlottesville over the weekend and his assertion that ‘very fine people’ were protesting alongside neo-Nazis,” the Washington Post reports.

“Instead, the White House said that Cohn plans to stay put and focus on advancing Trump’s economic agenda. It was unclear, though, how long Cohn would remain in the job or if he is still a leading candidate to be nominated as the next chairman of the Federal Reserve.”

“The position of opposing racial cruelty can operate in much the same way as opposition to animal cruelty — people do it not because they deem the objects of that cruelty their equals, but rather because they cannot continence the idea of inflicting pain and suffering on helpless and innocent creatures. But even here, the comparison cleaves, because suffering black people are judged to have courted their own suffering through a cascade of poor choices.

This soft white supremacy is the very thing on which the open racists build.

The white nationalists and the Nazis simply take the next step (not an altogether illogical one when wandering down the crooked path of racial hostility) and they overlay open animus.

This is apparently what draws the ire, what leaves people aghast: open articulation of racial hatred. That to me is a criminal act of denial that refuses to deal with the reality that racism is also signified far more subtly than through the wielding of slurs and sticks.”

The battle for the heart of the GOP on full display https://t.co/vWmUEpluba

E.J. Dionne Jr. writes—It is indefensible for Republicans to stick with Trump:

“We are past the time when mournful comments about President Trump’s disgraceful behavior are sufficient. It is no longer defensible for his lieutenants or Republicans in Congress to tell themselves that they’re staying close to Trump to contain the damage he could cause our country.

If their actual goal was to prevent damage, they have failed. True, we have not had a nuclear war and Trump hasn’t shut down our democracy. But if this is the standard, if these are genuine fears, then Trump should have been gone long ago. A man this unstable, self-involved, uninformed, divisive and amoral — a polite word in his case — should be nowhere near the levers of power.

It should embarrass all who work in the White House (except for the genuine extremists) that after Trump’s unhinged news conference Tuesday, they were reduced to insisting, on background, that everything the president said was unplanned, off-script and shocking to them.”

Ronald Brownstein explains “How Trump’s Reaction to Charlottesville Threatens the GOP” at The Atlantic: “Through Trump’s first months, the danger of him branding the GOP as intolerant has steadily smoldered, as he’s rolled out polarizing policies on undocumented and legal immigration, crime and policing, affirmative action, and voting rights. He’s also moved to reverse protections for transgender Americans in schools and the military…But Trump’s belligerent response to the unrest in Virginia has detonated this slowly burning fuse. His pointed refusal to unambiguously condemn the white-supremacist and neo-Nazi groups who gathered there may crystallize, in a way no policy debate could, the picture of him as racially and culturally biased, particularly among younger voters. “The truth is, I bet that Millennials have not paid that much attention to the policy stuff he’s done,” said Andrew Baumann, a Democratic pollster who has extensively surveyed the generation. “But I think Charlottesville is a whole different thing. This is a watershed moment.”

The view that Trump is "derailing his agenda" misunderstands Trump's agenda. https://t.co/SPRhMLnhSi

Josh Marshall: “Everything we are seeing stems almost inevitably from the decisions the country made, collectively, last November. We elected a President driven by white racial grievance. That is the fulcrum and driving force of his politics. It’s no surprise that a big outbreak of white supremacist violence would lead us to a moment like this. We also elected a President who is an abuser and a predator. I’ve analogized him before to an abusive man in an abused household – only his house is now the country, now with all the cumulative exhaustion, warped perceptions and damage that are the common lot of people living with and trapped with violent predators, addicts or people with certain profound mental illnesses.

As things get worse, as more people turn against him, Trump gets more wild and unbridled. He lashes out more aggressively. There’s no kill switch on this escalating aggression. It only builds…

Heyer's mom says here that the president tried to call her during her daughter's funeral pic.twitter.com/KhISc7J5oc