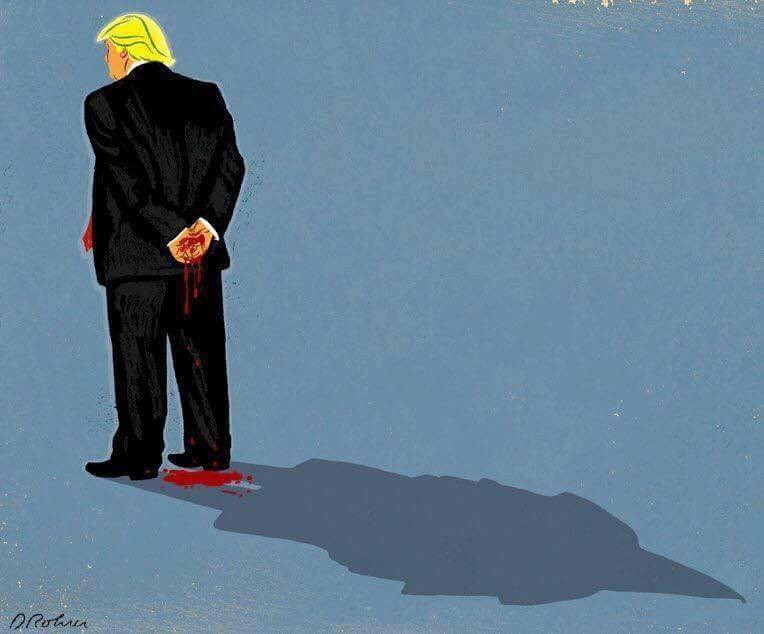 Donald Trump delivered a shocking press conference yesterday in which he said that the alt-right rally last Friday night in Charlottesville, Virginia (in which torch-carrying protesters chanted the white supremacist motto “blood and soil” and shouted “Jews will not replace us”) involved “some very fine people”; he then accused anti-racist counter-protesters of being as just as culpable as the Nazis in Saturday’s events, during which a counter-protester was killed by a Nazi terrorist. David Duke immediately applauded Trump’s statement:

Thank you President Trump for your honesty & courage to tell the truth about #Charlottesville & condemn the leftist terrorists in BLM/Antifa https://t.co/tTESdV4LP0

So did Nazi leader Richard Spencer.  So yeah, it is time we all get caught up to what Donald Trump is showing us, what he is telling us.  He is a white supremacist.  He is a racist.  He defended Nazis yesterday as if he was one of them.   He said there were “many fine people” who protested at the Nazi rally, and he wasn’t talking about the counter protesters.  In fact, he blames the counter protesters for inciting the violence, while saying that the nice Nazis were just there to peaceably protest the removal of the Lee statue, which he said they had a permit for.  He went with his gut yesterday.  He is who we thought he was.  He is a Nazi.

Even Wal-Mart slams Trump as corporate America abandons him https://t.co/6B7H7YXmo0

Ryan Lizza: “To be sure, though he enables and reinforces Trump’s ugly nativism, Bannon is hardly the deft, Rasputin-like manipulator he is seen as in American pop culture. He was adamantly opposed to the strike on Syria, and Trump ignored him. He has learned that Trump recoils from advisers who are seen to be controlling him.”

“If Trump finally pushes Bannon out of the White House, the nationalist policy project will be all but dead. The new chief of staff, John Kelly, is far more moderate on immigration and has pushed Trump to abandon the idea of a physical border wall. Economic policy will be fully under the control of Cohn, and the heretical idea of raising taxes on the wealthy will have no champion. Trump himself has always been more animated by the xenophobia of Bannonism than by its populist economic views. A Trump White House without Bannon will be no more radical in its coddling of far-right groups—today Trump showed again that he needs no encouragement—but it will be more captured by the traditional small-government agenda of the G.O.P. Bannon hoped to destroy.”

A new Congressional Budget Office report finds “premiums for the most popular health insurance plans would shoot up 20 percent next year, and federal budget deficits would increase by $194 billion in the coming decade if President Trump carries out his threat to end certain subsidies paid to insurance companies for the benefit of low-income people,” the New York Times reports.

“The subsidies reimburse insurers for reducing deductibles, co-payments and other out-of-pocket costs that low-income people pay when they visit doctors, fill prescriptions or receive care in hospitals.”

Caitlin Owens: “President Trump has threatened repeatedly to stop making the payments, but for now the issue remains unresolved. Lawmakers from both parties have actively discussed funding the subsidies in some kind of stabilization package over the last few weeks and will attempt to do so next month.”

Trump lawyer Jay Sekulow tells Adam Davidson that at least one of the president’s business dealings should be “out of scope” to special counsel Robert Mueller.  Which means Robert Mueller should and probably is looking at it.

“One foreign deal, a stalled 2011 plan to build a Trump Tower in Batumi, a city on the Black Sea in the Republic of Georgia, has not received much journalistic attention. But the deal, for which Trump was reportedly paid a million dollars, involved unorthodox financial practices that several experts described to me as “red flags” for bank fraud and money laundering; moreover, it intertwined his company with a Kazakh oligarch who has direct links to Russia’s President, Vladimir Putin. As a result, Putin and his security services have access to information that could put them in a position to blackmail Trump.

The waterfront lot where the Trump Tower Batumi was supposed to be built remains empty. A groundbreaking ceremony was held five years ago, but no foundation has been dug. Trump removed his name from the project shortly before assuming the Presidency; the Trump Organization called this “normal housekeeping.” When the tower was announced, in March, 2011, it was the centerpiece of a bold plan to transform Batumi from a seedy port into a glamorous city. But the planned high-rise—forty-seven stories containing lavish residences, a casino, and expensive shops—was oddly ambitious for a town that had almost no luxury housing.”

Josh Marshall: “What is Robert E. Lee known for? This is what I mean by the margins of the debate. Lee is known for one thing: being the key military leader in a violent rebellion against the United States and leading that rebellion to protect slavery. That’s it. Absent his decision to participate in the rebellion he’d be all but unknown to history. He outlived the war by only five years. There’s simply no positive side of the ledger to make it a tough call. The only logic to honoring Lee is to honor treason and treason in the worst possible cause.”

“Lincoln and his war cabinet had little question what Lee deserved. Look at Arlington National Cemetery. That’s Lee’s plantation. The federal government confiscated it and dedicated it as a final resting place for those who died defending the United States. It is a solemn, poetically rich, final and ultimately righteous verdict on his role in our national life. The entire project was very much by design: to punish Lee and shame him in public memory for betraying the United States… The generals… wanted to be certain the Lees would never be able to reclaim their estate. Making it into a hallowed national cemetery was a good way to accomplish that.”

After today's press conference, it looks like Trump and labor have broken up. https://t.co/HPzHynyA0V

So why did Trump do what he did today?   Taegan Goddard thinks it is a hedge against impeachment:

“With the big caveat that it’s easy to over-analyze Trump’s behavior, the logical explanation is that he believes his political strength depends on keeping his base happy. Polls show that base is shrinking by the week, but Trump may think it’s still large enough to block his removal from office — if it comes to that. For someone who insists the Russia investigation is “a hoax” or “fake news,” he’s been preoccupied with it since taking office like someone who is actually guilty.  If Trump is worried the investigation may ultimately lead to his impeachment, that’s when he’ll need his base to pressure senators to stand by him during a Senate trial. He’s making a bet that his base is big enough to pressure 34 senators from voting to remove him from office.”

Yeah, I don’t think he is thinking that far ahead.  I do think he has decided that he is going to dance with the ones that brought him.   He is going to do go down as who he is: a declining racist.

Both sides? There's only one side. The Nazi side. @jimjefferies responds to the events in #Charlottesville. pic.twitter.com/jXoLfcTyzb

The Economist: “Why is Justice Kennedy hanging around for another year? Maybe he would like to put in a full three decades before hanging up his robe. Maybe he isn’t anxious to give Donald Trump an opportunity to replace him. Or maybe the dazzling array of cases coming to the Supreme Court in the term beginning on October 2nd is just too tantalizing to watch from the sidelines. Whatever his motivation, Justice Kennedy is likely to be the central player in a number of the most contentious disputes he and his eight colleagues will hear when they return from their summer break.”

“The first blockbuster comes on the second day of the term when the court hears Gill v Whitford, a challengeto partisan gerrymandering that Justice Ruth Bader Ginsburg says is ‘perhaps the most important’ of the term and that Ian Samuel, co-host of First Mondays, a podcast about the Supreme Court, told listeners may be the ‘most important of your life.’”

No, not the same. One side is racist, bigoted, Nazi. The other opposes racism and bigotry. Morally different universes.

“During the presidential campaign, about the only common ground between billionaire conservative Charles Koch and Republican nominee Donald Trump was a colorful disregard for each other. Koch complained the choice between Trump and Hillary Clinton was like opting for cancer or a heart attack. And Trump bashed big-money donors, deriding his Republican rivals as ‘puppets’ who went knocking on Koch’s door for backing,” the Los Angeles Times reports.

“Not surprisingly, the Koch network largely sat out the 2016 presidential election and, Trump went on to win without them. Normally such a high-profile snub would carry a steep political price, shutting doors to the new administration.”

“But in recent months, Koch’s sprawling network of conservative advocacy groups has exerted surprising influence in the Trump administration, scoring some early accomplishments and pushing its priorities to the top of the White House agenda.”

What if Robert Mueller makes the case for impeachment and the Republicans do nothing?
https://t.co/cbRkNc9F0a pic.twitter.com/rA9wb27tIZ

James Hohmann: “Donald Trump often behaves as if he’s first and foremost the president of the states and the people who voted for him. That’s at odds with the American tradition, and it’s problematic as a governing philosophy — especially in a moment of crisis. Trump’s initially tone-deaf response to Charlottesville underscores why.”

“Animated by grievance and congenitally disinclined to extend olive branches, Trump lashes out at his ‘enemies’ — his 2020 reelection campaign even used that word in a commercial released on Sunday — while remaining reticent to explicitly call out his fans — no matter how odious, extreme or violent.”

“Channeling his inner-Richard Nixon, who kept an enemies list of his own, candidate Trump often claimed to speak for ‘a silent majority.’ After failing to win the popular vote, President Trump has instead governed on behalf of an increasingly vocal but diminishing minority.”

President Trump retweeted a cartoon of a train bearing the Trump logo killing a CNN reporter, the Daily Beast reports.

“The cartoon reads ‘Fake news can’t stop the Trump train.’ In July, Trump shared a GIF of himself beating the CNN logo to a pulp. Thirty minutes after promoting the cartoon at 7 a.m. Tuesday, it was deleted from Trump’s Twitter feed.