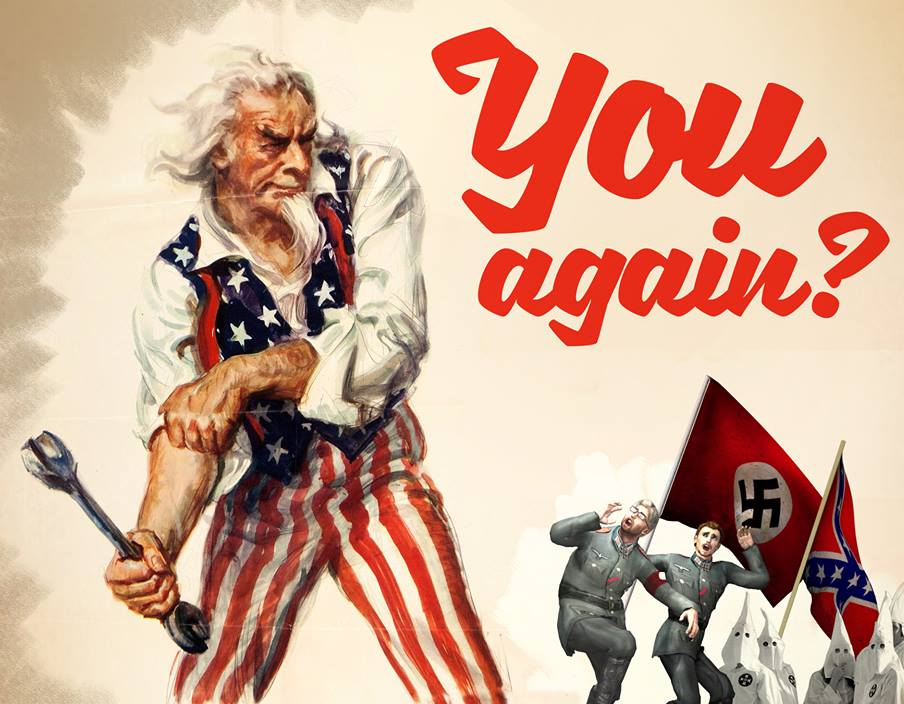 There are not many sides.  There are only two: the American side, and the Nazi side.  The violence and terrorism committed yesterday was by the Nazi side.  And the President did not condemn it.  Instead, he offered a vague and half-hearted denouncement of the violence and hatred by “many sides,” and then told us we must cherish our history.   These were intentional code words to the Nazi Right, and the Nazi Right read them as such.  Don’t believe me, then believe them:

In case you're wondering if President Trump inspires neo-nazis–this is from their publication The Daily Stormer: pic.twitter.com/cT4OZv7VMP

President Trump is at the very least a Nazi enabler.  He knows where his bread is buttered.  He knows who his base is.  He must be removed from office at the earliest opportunity.

Josh Marshall: “Through today I’ve heard various politicians, journalists and public people asking Trump some version of, “Why can’t you denounce this?”

We’ve been here for … what? Almost two years? I understand the impulse. But at a certain point, we’re simply being chumps to keep asking. We know. If we don’t, we should. I’m tempted to say we have no excuse. There’s not. But there is some explanation. We have become as a people, or at least our establishment voices, like family members in the home of an abuser, unable to face the obvious reality of our situation because it is in the nature of living with an abuser that it warps your reality. As I wrote last October, “one of the greatest damages is that we’ve all come to see Trump’s chaotic emotions, violence and tirades as perhaps half normal. I had a hard time divining whether his angry bluster and transgressive antics in the debate would have any effect because we’ve all become so used to it. Like family members living in the home of an abuser our sense of what is normal starts to get blunted and deformed under the weight of abuse. The whole country is damaged in a way that won’t soon lift under the best of circumstances.”

Our sense of reality has been warped. People who refuse to condemn nazis and white supremacists even in the most clear-cut cases – again and again, month after month and year after year – do so because they support those people. This may sound extreme but it is obvious. We are like a woman who can’t admit her husband is an abuser. ‘I provoked him.’ ‘He’s got stress at work.’ ‘It was just one time.’ ‘He said he was sorry.’ You want to shake someone like this to open their eyes and see the reality of the situation. But living with someone with a damaged psyche has in turn damaged them. It is hard to emerge from.

Trump refuses to condemn these people because he recognizes them as supporters and he supports them. That’s the truth. Anything else is denial.”

The Charlottesville protests are white fragility in action: https://t.co/ioOiiEFb2N

The man on the right side of the photo above is Peter Cvjetanovic.   He will soon be losing his job at the University of Nevada-Reno.   This twitter handle, Yes, You’re Racist, is naming all the Nazis that attended the rally that can be identified by the photos of the rally.  Their lives must be destroyed.  They must lose their jobs, their families and their homes.  They are to be pariahs.

David French from the National Review: “Incredibly, key elements of the Trump coalition, including Trump himself, gave the alt-right aid and comfort. Steve Bannon, the president’s chief strategist, proclaimed that his publication, Breitbart.com, was the “the platform for the alt-right,” Breitbart long protected, promoted, and published Milo Yiannopolous – the alt-right’s foremost “respectable” defender – and Trump himself retweeted alt-right accounts and launched into an explicitly racial attack against an American judge of Mexican descent, an attack that delighted his most racist supporters.

In other words, if there ever was a time in recent American political history for an American president to make a clear, unequivocal statement against the alt-right, it was today. Instead, we got a vague condemnation of “hatred, bigotry and violence on many sides.” This is unacceptable, especially given that Trump can be quite specific when he’s truly angry. Just ask the Khan family, Judge Curiel, James Comey, or any other person he considers a personal enemy. Even worse, members of the alt-right openly celebrated Trump’s statement, taking it as a not-so-veiled decision to stand against media calls to condemn their movement.”

The Dallas Morning News says President Trump failed his first true test of leadership: “[W]hat we witnessed Saturday in Charlottesville, Va., revealed the ugliness of America. What’s worse is that in its aftermath, President Donald Trump had an opportunity to show real leadership but couldn’t bring himself to do it. […]  The country needed to hear the president specifically condemn white supremacists and make clear to them that while they have a First Amendment right to express their views, their hatred and bigotry run counter to the values of the United States. There will be no toleration of violence.

The preliminary charges for this right wing terrorist are 1 count of second degree murder and 3 counts of malicious wounding and failure to stop at the scene of an accident.  I suspect these charges will be amended to First Degree Premeditated Murder, Terrorism, and 35 counts of Attempted Murder based on the video evidence below.

Video of fascist driving through crowd of protesters in #Charlottesville
Video by @Rebelutionary_Z #Antifa #UniteTheRight pic.twitter.com/ruT4V1kMdw

Video of car hitting anti-racist protestors. Let there be no confusion: this was deliberate terrorism. My prayers with victims. Stay home. pic.twitter.com/MUOZs71Pf4

Associated Press: “Faced with perhaps his gravest international crisis yet, President Donald Trump this week responded precisely as his some of supporters hoped and his critics long feared. The mix of plain-spoken bluster, spontaneity and norm-breaking risk that defined his political rise defined his approach to a round of fresh threats from nuclear North Korea. When Pyongyang punched, Trump counterpunched harder – much as he did on a debate stage flanked by political opponents.”

“But this was not a Florida debate stage or a low-stakes celebrity Twitter war of the sort Trump perfected before entering politics. It was a standoff over North Korea’s rapidly developing nuclear program, complete with trading threats of war and the safety of millions in the balance. Over the course of the week, Trump unleashed provocative rhetoric and dismissed the careful or precise diplomatic language favored by his predecessors.”

“Still, Trump’s strategy was familiar. He tweeted regularly. He took it personally. He spoke off the cuff. He talked – a lot – holding a two-day blitz of press conferences, each yielding moments that immediately sparked chatter, confusion, criticism and attention.”

I miss a real President in times of crisis and terror attacks. pic.twitter.com/FOHOLEsYXa

“In a sign that the investigation into Russian interference in the 2016 presidential election will remain a continuing distraction for the White House, special counsel Robert Mueller is in talks with the West Wing about interviewing current and former senior administration officials, including the recently ousted White House chief of staff, Reince Priebus,” the New York Times reports.

“Mr. Mueller has asked the White House about specific meetings, who attended them and whether there are any notes, transcripts or documents about them… Among the matters Mr. Mueller wants to ask the officials about is President Trump’s decision in May to fire the F.B.I. director, James Comey.”

Sen. Richard Burr (R-NC), “the initially reluctant but now determined leader of the Senate Intelligence Committee inquiry into Russian interference in the 2016 election, said the investigation had expanded beyond its original scope based on new evidence, but he hoped to complete it this year to allow Congress to take steps to prevent future efforts at tampering by Moscow,” the New York Times reports.

What @POTUS should say: "To racists and anti-Semites who claim to support me, know this: I denounce your bigotry and reject your support." https://t.co/EZv00RvlUK

Politico: “The role of chief strategist Steve Bannon has come under particular scrutiny in several conversations, particularly because he has a large staff, including an outside public relations expert, but no specific duties.”

“In a number of daily meetings, Kelly generated a list of concerns, including aides without clear portfolios, decisions that aren’t made with proper vetting and internal fights — particularly a sustained campaign against national security adviser H.R. McMaster. He has met with top aides, including the president’s son-in-law Jared Kushner, about making changes, the four officials say. In some of the encounters, he has suggested that people should be more concerned with the president’s agenda and less concerned with their own.”

“Trump has told associates he’s fed up with what he sees as self-promotion by Bannon, who did not join the core team this week at the president’s golf club in Bedminster, N.J.”

“Bannon’s time with Trump has diminished since the new chief of staff, retired Marine Gen. John Kelly, took over and imposed discipline on the circus around the Oval Office.”

Benjamin Wittes: “Back in February, speaking before a Joint Session of Congress, President Trump declared that: ‘according to data provided by the Department of Justice, the vast majority of individuals convicted of terrorism and terrorism-related offenses since 9/11 came here from outside of our country.’”

“There’s a lot of reason to believe this statement is a compound lie—both to believe that the vast majority of individuals convicted of terrorism-related crimes did not come here from elsewhere and to believe that the men and women of the Department of Justice did not provide any data suggesting otherwise.”

“So I filed a FOIA request to find out both whether such data exist.”