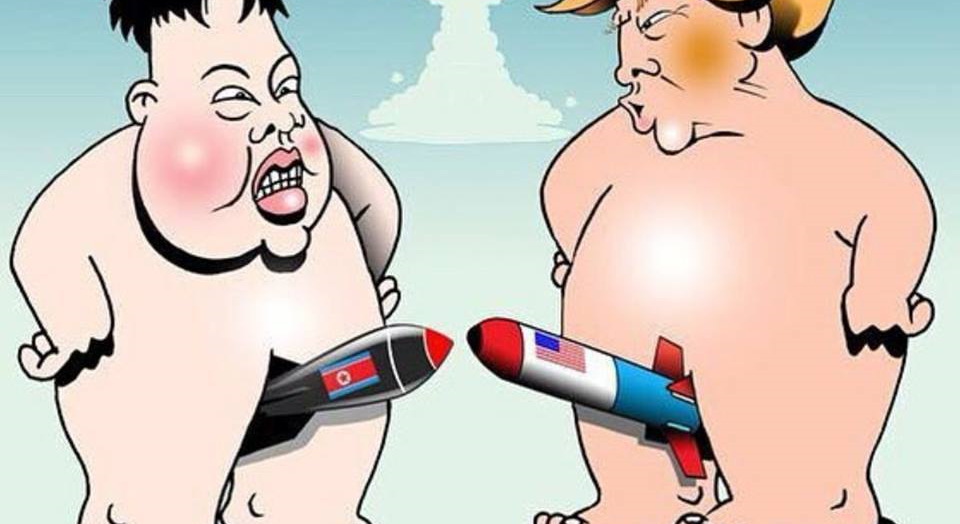 President Trump offered a fresh threat of force against North Korea, writing on Twitter that “military solutions are now fully in place, locked and loaded” if the regime of Kim Jong Un should “act unwisely,” the  Washington Post reports.

Trump’s latest warning came a day after he cautioned North Korea that “things will happen to them like they never thought possible” should the isolated country attack the United States or its allies.

German Chancellor Angela Merkel warned against “the escalation of rhetoric” in the wake of rising tensions between the U.S. and North Korea, adding that she didn’t see a military solution to the issue, The Hill reports.

Said Merkel: “I believe that, am firmly convinced that an escalation of rhetoric will not contribute to a solution of this conflict. I do not see a military solution to this conflict, rather I see continuous work, like we have seen in the U.N. Security Council with members with resolutions in view of North Korea, and above all very close cooperation with affected countries, especially the United States and China, but also South Korea, of course Japan.”

David Leonhardt: “The message is straightforward. Only a few decades ago, the middle class and the poor weren’t just receiving healthy raises. Their take-home pay was rising even more rapidly, in percentage terms, than the pay of the rich.”

“In recent decades, by contrast, only very affluent families — those in roughly the top 1/40th of the income distribution — have received such large raises. Yes, the upper-middle class has done better than the middle class or the poor, but the huge gaps are between the super-rich and everyone else.”

You're not imagining it: the rich really are hoarding economic growth https://t.co/gp6ZQCNhe5

Major donors to former President Obama aren’t committing to Joe Biden, The Hill reports.  “While it is exceedingly early in the race for the 2020 Democratic presidential nomination, top Obama donors are signaling that Biden cannot depend on their support… None of them would commit to backing Biden, and many of them said they preferred to find a new voice to run against President Trump in 2020.”  Said one: “He’s the opposite of what the party says it wants right now. He’s going to have a tough time if he runs..”

Ryan Lizza: “I reached out to Ron Klain, Gore’s chief of staff when he was Vice-President, to ask about how Gore dealt with the complexities of serving loyally as Vice-President for someone who might be booted out of office. He was reluctant to compare Pence’s situation with Gore’s, but he did, however, make it clear that any attempt by Pence to escape Trump’s shadow would be met with a withering argument from Democrats.”

Said Klain: “Over all, I would say that whenever Mike Pence runs for office in the future, the liability he will carry from this period is not how he distanced himself from Trump but, rather, how he deepened his ties to the President. In 2020, at the end of a failed, one-term Trump Presidency, no amount of PAC money or donor meetings will insulate Vice-President Pence from the political fallout from being Donald Trump’s transition chief, Capitol Hill liaison, right-hand man, and principal surrogate.”

This long article is from 2004 from the Washington Monthly.  It is a very informative read about how both the Clinton and Bush Administrations dealt with North Korea and who is really responsible for NK getting nukes:

Josh Marshall has more on the real history: “The simple reality was that the Bush team didn’t like the deal but had nothing to replace it with. The threat of force wasn’t credible because of the costs of a military confrontation which the North Koreans were well aware of. So the US got to act tough (or rather feel tough) and not go in for ‘appeasement’ and the result was that North Korea became a nuclear power. Might they have become a nuclear power anyway? Maybe. But it seems very hard to argue that they would have gotten there as quickly as they did or would even be there today if the US had continued with the quite minor amounts of aid the Agreed Framework required. He didn’t argue this specifically. But last night TPM Reader ML raised the possibility that our actions really don’t matter here at all, that North Korea’s behavior is driven by internal factors. This may certainly be true. But in that case we have no impact or influence regardless. (We tend to focus on North Korea’s ‘craziness’ but I think you can argue that their drive for nuclear weapons is highly logical.)

The real lesson I draw from this is that we should be extremely wary about actions which have the feeling or appearance of toughness but which are likely to have negative or even dire results because we have no viable, alternative policy. That seems very much like the situation we are moving toward with North Korea. Certainly it’s what President Trump was doing yesterday when he made wild threats he is highly, highly unlikely to follow through on. (Is President Trump really going to launch an all out nuclear attack on North Korea with all the horror, death and destruction in both Koreas, nuclear fall out in nearby states in retaliation for more verbal threats? Please.)”

Max Boot: “Fox is ever more firmly entrenched in the official echo chamber of Trump Nation — and ever more divorced from reality. The National Enquirer, owned by Trump friend David Pecker, is Trump’s Pravda(its recent cover story: ‘Hillary Framed Trump Family! How she set up Donald’s son with dirt file emails!’). Breitbart, once chaired by Trump aide Stephen Bannon, is his Sputnik. Fox is the jewel in the crown — Trump’s own version of RT. ‘A lot of people wish President Trump was a dictator,’ Fox host Jesse Watters said on July 27. Perhaps at Fox News.”

“In fairness, there are solid, straight-down-the-middle reporters at Fox such as Chris Wallace, Bret Baier, and Shepherd Smith, and a few, increasingly marginalized, commentators such as Charles Krauthammer, Ralph Peters, and Steve Hayes who are critical of Trump. But their work is drowned out by the screeching chorus of Trump toadies that dominates Fox’s evening and morning schedule.”

The Washington Post got a sneak peak at the Almanac of American Politics 2018 and finds that “if you really want to know why the Republican majority in the House has been so strong, the answer lies in these six states: Michigan, Indiana, Ohio and Pennsylvania — across the Rust Belt — and Virginia and Florida down South.”

“After the 2008 elections, those six states sent a combined 97 members to the House and Democrats held a 51-to-46 edge over Republicans among the lawmakers representing them. The disastrous 2010 showing for Democrats resulted in a net GOP gain of 21 seats in those states, 67 Republicans to 30 Democrats, and that margin has remained remarkably steady ever since. Today, after decennial reapportionment reduced those combined seats by two, there are now 64 Republicans to 31 Democrats in the House from those six states. It’s a bulwark created partly by Republican control of most of those states during the 2011 redrawing of the congressional districts —  and partly by the House Democrats’ inability to field candidates who appeal voters beyond the inner suburbs.”

There is a longstanding deadlock with North Korea, one which a rational U.S. president would be able to manage. https://t.co/dTUUbsADE9 pic.twitter.com/HQtvPyB69K

“The White House is pushing a deal on Capitol Hill to head off a government shutdown that would lift strict spending caps long opposed by Democrats in exchange for money for President Trump’s border wall with Mexico,” Politico reports.

“The government runs out of money after Sept. 30. Without a spending deal, federal agencies will be forced to close until an agreement is reached. Democrats have vowed to oppose funding for a border wall, making it probably the biggest threat to an early October closure.”

“The conservative House Freedom Caucus will file a petition today to try to force Speaker Paul Ryan to bring up a so-called ‘clean Obamacare repeal’ bill,” according to Politico.

“The legislation passed the House and Senate in the past — it repeals Obamacare after a two-year transition period. (It failed the Senate this year.) If the discharge petition — which will get filed during today’s pro-forma session — gets 218 signatures, it will force a floor vote. The Freedom Caucus and conservative outside groups will try to ramp up lots of pressure to force people to sign on. Expect Trump — itchy for victory, and frustrated with Republican leaders on health care — to weigh in. He’s close with some members of the Freedom Caucus.”

i tried to answer a question i've been asking myself a lot https://t.co/pWGrIORLnh

Attacks on Democrats should be used as a strategy to pressure them leftward, not to disqualify them.

“Rhona Graff, a senior vice president at the Trump Organization who has worked at Trump Tower for nearly 30 years, has acted as a gatekeeper to Trump. She remains a point of contact for the sprawling universe of Trump associates, politicians, reporters and others seeking Trump’s time and attention, even now that he’s in the White House.”

I think "Medicaid-for-more!" is a very likely future for Dem health policy: https://t.co/LEQqVaYTW1

Washington Post: “Midway through President Trump’s second media availability in a single afternoon here Thursday, his press secretary, Sarah Huckabee Sanders, held up a sign signaling to the boss that it was time to drop the curtain on the show. ‘One more question,’ it read. The president either did not see her plea or opted to disregard it, because he kept answering questions — for 20 minutes straight, after having already fielded them for seven minutes in the earlier session.”

“Engaging with people — journalists, advisers, friends and even foes — is Trump’s lifeblood. His Oval Office has felt like a busy train station, with people breezing in and out to share a juicy tidbit or to solicit the president’s opinion on a pressing issue or to chew over something in the news. He likes to watch cable television news shows with other people, sometimes only through the phone.”

Said one Trump confidant: “This is what General Kelly will learn very quickly, which is when you put this guy in a cage and think you’re controlling him, things like this happen.”

Former Trump campaign chairman Paul Manafort “is changing his attorneys as a federal investigation heats up into his financial transactions,” Politico reports.  “Manafort’s case will now be handled by Miller and Chevalier, a boutique firm in Washington that specializes in complicated financial crimes among other issues… Manafort is cutting ties with WilmerHale, the firm that has represented him in the matter so far. His former lawyer there, Reg Brown, led the congressional investigations practice.”