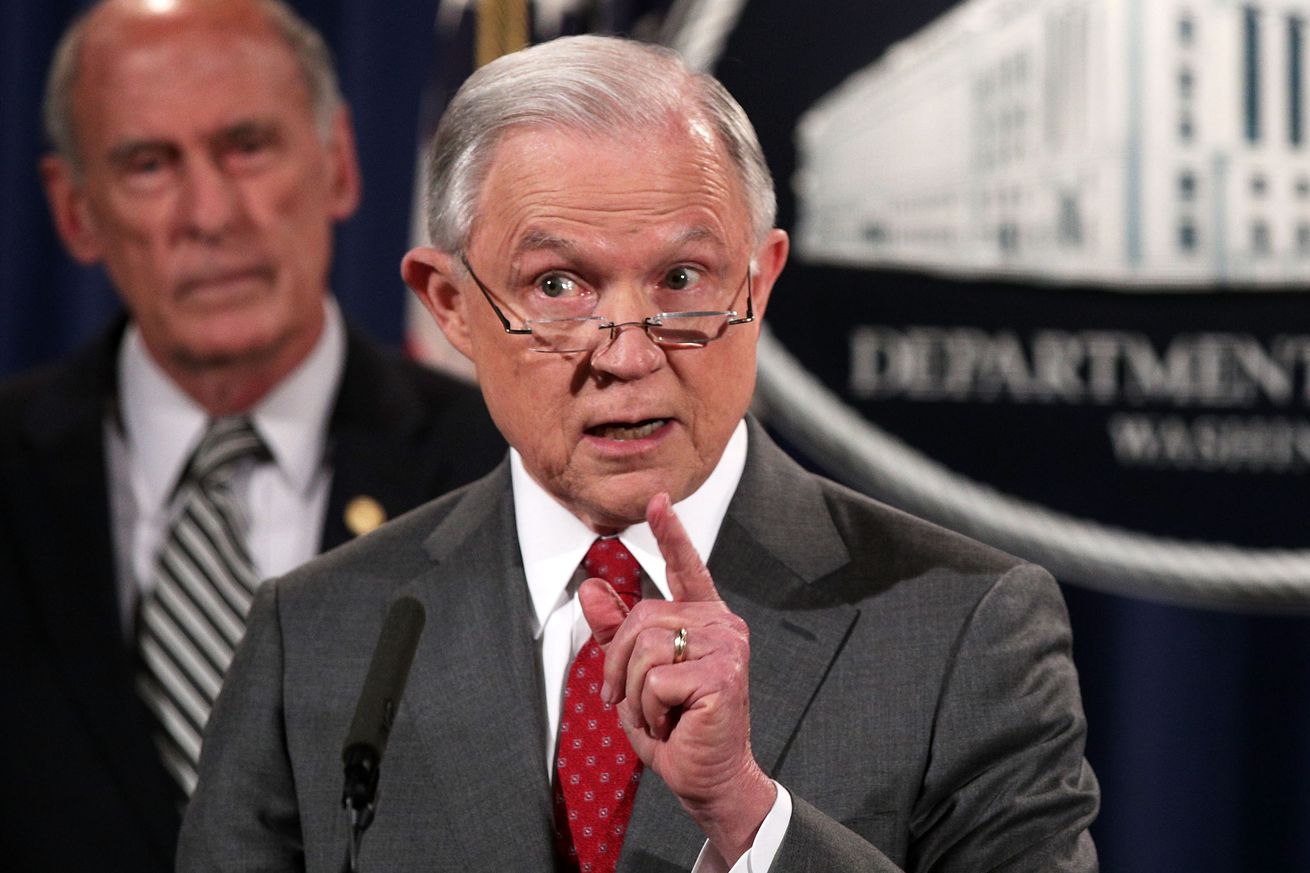 Trying to placate the president that is so disappointed in him, Attorney General Jeff Sessions is “taking a stand” against leakers and “reviewing” policies against subpoenaing reporters to force them to reveal their sources or potentially face jail time, he announced Friday.  Sessions announced  that the Department of Justice has tripled the number of investigations into disclosures of classified information compared to the end of Obama administration — which was not exactly easy on leakers.

“I have this warning for would-be leakers: Don’t do it,” Sessions said at a press conference, alongside Dan Coats, the Director of National Intelligence. The announcement came a day after the Washington Post published leaked transcripts of Trump’s phone calls with foreign leaders.

STRONG OPPOSITION TO FIRING MUELLER IN SWING DISTRICTS.  A new Greenberg Quinlan Rosner poll of the top 99 battleground congressional districts for 2018 shows voters in these swing districts strongly oppose any move by President Trump to fire Special Counsel Robert Mueller, 60% to 29%.  An overwhelming 86-10% majority says Trump should not be allowed to pardon himself from criminal prosecution – a possibility the President and his team reportedly examined.

James Hohmann: “[Thursday]’s news that Robert Mueller has begun using a grand jury in federal court in Washington, as part of his investigation into possible coordination between the Kremlin and the Trump campaign, further boxes in the president and makes it more politically difficult to justify firing the special counsel.”

“If President Trump ever lost the support of Sen. Thom Tillis (R-NC), he just might be doomed. A former state House speaker, Tillis is a reliable Republican apparatchik whose vote party leadership can count on. So it was a big deal yesterday when he introduced legislation with a Democratic colleague, Chris Coons (D-DE), to prevent Trump from firing Mueller without cause.”

Mexican official on Trump: "He's the opposite of Teddy Roosevelt. He speaks loudly and carries a small stick." https://t.co/KLdIdUJIXg

TRUMP EMBRACES CULTURE WARS AS A DISTRACTION. Ronald Brownstein, citing Trump’s “gamble” that “that cultural affinity can trump economic self-interest for the older and blue-collar white voters central to the coalition that elected him,” observes, “The key economic signal that Trump offered last week was his unreserved embrace of the stalled Senate effort to repeal the Affordable Care Act, despite abundant evidence those older and working-class white voters would be among the biggest losers in all of the Republican replacement plans. That decision underscored Trump’s conversion to the long-standing drive by the Congressional GOP — especially House Republicans allied with Speaker Paul Ryan — to systematically retrench the social safety net, despite Trump’s conspicuous campaign promises to protect Social Security, Medicare and Medicaid…One day before the vote, the administration issued a flurry of decisions rolling back transgender and gay rights. Speaking just hours after the vote, Trump braided a blistering attack on undocumented immigrant gang members (who he repeatedly labeled “animals”) with a plea for unshackling law enforcement from what he called “pathetic” big city mayors…Those twin initiatives marked an escalation of cultural conservatism aimed directly at many of those same older and blue-collar whites’ fears that they are being eclipsed by the hurtling demographic and social changes remaking American society.”

Trump is too incompetent to serve, and Congress must be pressured into removing him. https://t.co/a8exrloDrS pic.twitter.com/eh9qphTo8l

TIME TO TRUST BUST AGAIN.  “Democrats should make fighting monopolies the central organizing principle of their economic agenda,” Martin Longman writes at in is post, “How to Win Rural Voters Without Losing Liberal Values” at The Washington Monthly. “This approach holds the promise of bringing together groups that seem inherently at odds: nativists and cosmopolitans, fundamentalists and secularists, urbanites and rural dwellers…The strongest reason to think this could work is, quite simply, that it has worked before. A century ago, agrarian populists and big-city progressives united around a common opposition to monopoly, forming a movement that dominated American politics for decades and helped deliver a broadly shared prosperity. Because the economic landscape today is strikingly similar to what it was a hundred years ago, there’s every reason to believe that the conditions are right for a similar alliance to arise again.”

NO DEAL WITH THE SECRET SERVICE.  “The Secret Service has vacated its command post inside Trump Tower in Manhattan following a dispute between the government and President Trump’s company over the terms of a lease for the space,” the Washington Post reports.  The President, who is the best dealmaker in the world, cannot reach an agreement with the Secret Service.   If I were him, and I was awash in billions, I would give office space to the those pledged to protect me with their lives for free.

Why Jared and Ivanka have no business being in the White House. Spot on op-ed by @JoeNBC: https://t.co/S61ZCQpX0f pic.twitter.com/H0HeDYELfR

SENATE BLOCKS RECESS APPOINTMENT POWER DURING THE AUGUST RECESS. “The Senate blocked President Trump from being able to make recess appointments on Thursday as lawmakers leave Washington for their summer break,” The Hill reports.

“Sen. Lisa Murkowski (R-AK), doing wrap up for the entire Senate, locked in nine ‘pro-forma’ sessions — brief meetings that normally last roughly a minute. The move, which requires the agreement of every senator, means the Senate will be in session every three business days throughout the August recess.”

COS KELLY WILL NOT MANAGE TRUMP. New York Times: “Mr. Kelly has told his new employees that he was hired to manage the staff, not the president. He will not try to change Mr. Trump’s Twitter or TV-watching habits. But he has also said he wants to closely monitor the information the president consumes, quickly counter dubious news stories with verified facts, and limit the posse of people urging Mr. Trump to tweet something they feel passionately about.”

“He has privately acknowledged that he cannot control the president and that his authority would be undermined if he tried and failed. Instead, he is intent on cosseting Mr. Trump with bureaucratic competence and forcing staff members to keep to their lanes.”

HOW TO AVOID WAR WITH NORTH KOREA. The Economist: “If military action is reckless and diplomacy insufficient, the only remaining option is to deter and contain Mr Kim. Mr Trump should make clear — in a scripted speech, not a tweet or via his secretary of state—that America is not about to start a war, nuclear or conventional.”

“However, he should reaffirm that a nuclear attack by North Korea on America or one of its allies will immediately be matched. Mr Kim cares about his own skin. He enjoys the life of a dissolute deity, living in a palace and with the power to kill or bed any of his subjects. If he were to unleash a nuclear weapon, he would lose his luxuries and his life. So would his cronies. That means they can be deterred.”

This is obvious.  This applies to any country that attacks the US or one of our allies with a nuclear weapon: You do it, and we will eliminate you, your people and your land from existence.   But this means we accept North Korea as a nuclear power, which to some was a red line.

“The reality is that, after seven years of unity on repealing Obamacare, Republicans are rudderless on how to talk about or address the defining domestic policy issue of nearly the past decade for their party, and they have no clear plans despite holding all the levers of power in Washington. Now, they face a month away from the Capitol, answering to their home-state voters about their lack of progress.”

What We Can Expect From Mueller’s Grand Jury https://t.co/qB5wiYWMmo

SHORT TERM DEBT CEILING BILL. “Republicans looking to find a path forward on a short-term government funding bill and raising the debt ceiling when they come back in September have begun discussing combining the two must-pass pieces of legislation. Both the debt ceiling and government funding bills will need Democrats to pass,” according to Politico.

“They are likely to try to extend the debt ceiling and government funding to December. If they combine them it would allow leadership to try to strike a deal. Expect this strategy to inflame conservative members who are unlikely to be appeased by the argument that the real fight is in December.”

AUGUST IS A BAD MONTH FOR PRESIDENTS. First Read: “For presidents of the United States, August almost always stinks. Whether it’s because key allies are out of town and unplugged, because the White House support network is thinner or because the nation’s woes seem a little more acute in Washington’s swampy August weather, presidents often get mired in controversies or crises — and often mishandle them — in the dog days of August.”

First Read: “Speaking of McMaster, he’s become the new Reince Priebus — the administration official that some Trump diehards love to hate. As we learned yesterday, for example, McMaster has concluded that Susan Rice did nothing wrong — a report that sparked outrage from those who have tried to place Rice at the center of anti-Trump conspiracy theories. And like Priebus, the folks who think McMaster is undermining the president will have plenty of motivation to make his life miserable to try to push him out.”