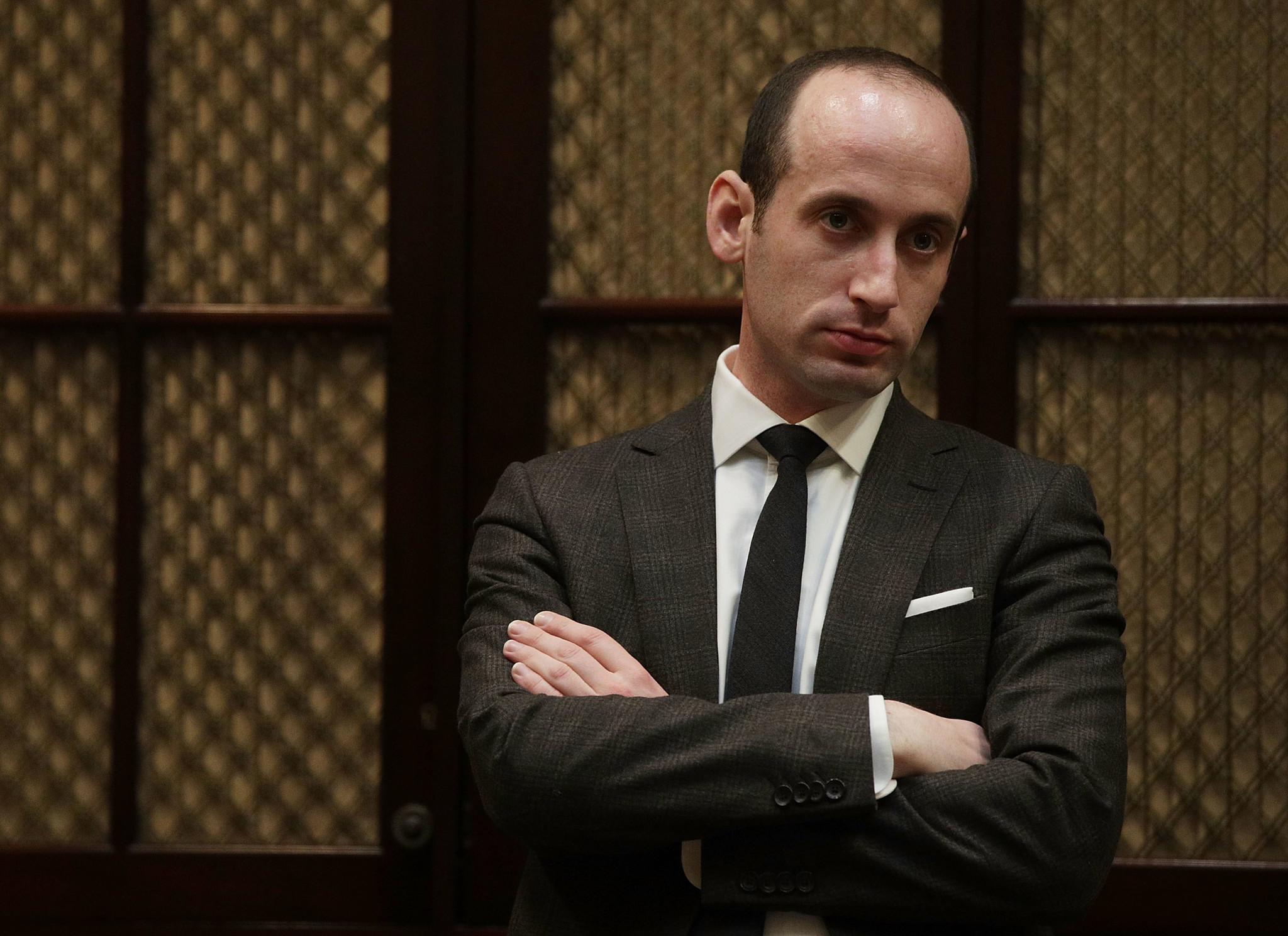 President Trump on Wednesday endorsed a new bill in the Senate aimed at slashing legal immigration levels in half over a decade, and then only allowing in those who are highly skilled and speak English.  White House white supramacist Stephen Miller attended the White House press briefing today to explain and defend the bill.  Here is some of what he had to say:

“As a result of [current] policy, we’ve seen significant reductions in wages for blue collar workers, massive displacement of African American and Hispanic workers, as well as displacement of immigrant workers from previous years who often times compete directly against new arrivals who are paid even less. So its a policy that has actually exacerbated wealth inequality in the country in a pretty significant way. So you’ve seen over time, as a result of this historic flow of unskilled immigration, a shift in wealth from the working class to wealthier corporations and businesses and its been very unfair for American workers, especially for immigrant workers, African American workers and Hispanic workers and blue collar workers in general across the country.  At the same time, it’s cost taxpayers enormously because roughly half of immigrant-headed households in the United States receive some type of welfare benefit.”

Nice little racist trick there, Mein Obergruppenführer Miller.  He just argued that it is immigrants who are causing wealth inequality in this country—especially for people of color.  Pit everyone against each other, right out of the fascist playbook.  During questioning, there was this rather shocking exchange with CNN’s Jim Acosta…..

The FAA issued “temporary flight restrictions” over Bedminster, New Jersey from August 4 to 21 due to “VIP movement,” a pretty good indication that President Trump will likely be taking a summer vacation at his golf club there. We can only pray that the President will take a vacation from speaking or tweeting as well.  We Americans and humans need a break.

No.  A Presidential candidate must first possess a personality. Charisma. Zuckerberg lacks both.  Plus, Trump has ruined the resume line of “billionaire businessman” for a couple of centuries.

“Ezra Cohen-Watnick, the senior director for intelligence on the National Security Council, has been dismissed from the White House,” the Conservative Review reports.

“Cohen-Watnick was originally brought on board by former NSC chief Gen. Michael Flynn. National Security Adviser H.R. McMaster has, in the past, attempted to rid the council of Cohen-Watnick, but was overruled by President Trump, Steve Bannon, and Jared Kushner.”

Why was he allegedly fired this time?  The Atlantic: “A top official of the National Security Council was fired last month after arguing in a memo that President Trump is under sustained attack from subversive forces both within and outside the government who are deploying Maoist tactics to defeat President Trump’s nationalist agenda.”

“His dismissal marks the latest victory by National-Security Adviser H.R. McMaster in the ongoing war within Trump’s White House between those who believe the president is under threat from dark forces plotting to undermine him, and those like McMaster who dismiss this as conspiratorial thinking.”

Time for a minor tweetstorm about the late, unlamented Ezra Cohen-Watnick, the just-fired NSC intelligence director, and Its Meaning. /1

President Trump “has become increasingly frustrated with his advisers tasked with crafting a new U.S. strategy in Afghanistan and recently suggested firing the war’s top military commander during a tense meeting at the White House,” NBC News reports.

Said Trump: “We aren’t winning. We are losing.”  Trump also “inquired about the United States getting a piece of Afghan’s mineral wealth.” He then “compared the policy review process to the renovation of a famed New York restaurant in the 1980s.”

“The Trump administration is preparing to redirect resources of the Justice Department’s civil rights division toward investigating and suing universities over affirmative action admissions policies deemed to discriminate against white applicants,” according to a document obtained by the New York Times.

The document seeks current lawyers interested in working for a new project on “investigations and possible litigation related to intentional race-based discrimination in college and university admissions.”

As Paul Waldman explains, “The Trump administration takes up the cause of oppressed white people.”

“Affirmative action is just one particularly resonant part of this puzzle, in which white people are told that any effort to address historical and current discrimination must necessarily involve taking something from white people and giving it to black people, a zero-sum contest in which, if racism is being ameliorated, it must mean whites are being victimized.

This idea goes back a long way, but it’s important to understand that it needs to be constantly maintained, which is where the conservative media come in. If you’re not a regular viewer of Fox News, reader of Breitbart or listener to the likes of Rush Limbaugh, you may not understand what a central role white racial grievance plays in the media presentations that shape how conservatives today see the world. There are constant reminders in those forums that government is an entity that swoops into your life to steal things from you so that it can give them to undeserving black people.”

YET ANOTHER video of Baltimore police officers planting evidence at a crime scene has surfaced pic.twitter.com/GpQXkWQCMF

President Trump signed legislation imposing sanctions on Russia and limiting his own authority to lift them, a measure that has already escalated tension with the Russian government and produced retaliation against the American embassy there, the New York Times reports.

The bill passed both houses with near-unanimous, bipartisan majorities that would easily override any veto.

A new Quinnipiac poll finds President Trump’s approval rating at a dismal 33% to 61%.

By a 54% to 26%, American voters say that they are embarrassed rather than proud to have Trump as president and by 57% to 40%, they say he is abusing the powers of his office.

Said pollster Tim Malloy: “It’s hard to pick what is the most alarming number in the troubling trail of new lows for President Trump. Profound embarrassment over his performance in office and deepening concern over his level-headedness have to raise the biggest red flags. The daily drip drip of missteps and firings and discord are generating a tidal wave of bad polling numbers.

Look at the Disapprove strongly number.   Except for among Republicans, it is DEVASTATING across the board: Americans, Democrats, Independents, Men, Women, the College Educated and the non-College Educated, young, middle aged, old, White men, White women, Nonwhite men and Non-white women.

If you've never read this in-depth @vanityfair backgrounder on Stephen Miller, now is as good a time as any. https://t.co/vHwWB6bu0k

Playbook: “It’s very hard to see how this is not going to be a huge legislative fight in the fall. Conservatives are going to want to notch a legislative achievement alongside lifting the debt limit. Democrats are out of power in every sense, and will want a clean increase but won’t want to be seen as carrying it. The ceiling needs to be lifted by the end of September. Government funding also runs out then. And the White House has said they want to finish tax reform by the end of October.”

Washington Post: “The Senate and House are scheduled to be in session together for a total of just 12 daysfrom now until the debt ceiling deadline, giving them little time to focus on tax cuts.”

Feel like catching up on all things Trump-Russia? @DanielSchulman & I are STILL updating this Trump-Russia timeline https://t.co/jXRedZr4gu

“In explaining his decision to reporters, the Kentucky Republican cited a Tuesday letter from 45 Democratic senators urging Republicans not to use reconciliation and vowing to oppose a tax plan that adds to the deficit or cuts the annual bill of the richest 1 percent of taxpayers.”

Jonathan Chait says the letter tricked McConnell into admitting he just wants to cut taxes for the rich.

The Associated Press reports that Gen. Jim Mattis and Gen. John Kelly “agreed in the earliest weeks of Trump’s presidency that one of them should remain in the United States at all times to keep tabs on the orders rapidly emerging from the White House, according to a person familiar with the discussions.”