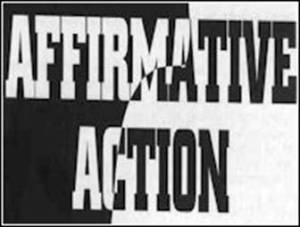 Trump voters are gonna love this! This is a classic – right up there with “Why isn’t there a white history month?” nonsense. Sadly, it won’t only be Trump supporters agreeing with this. I’ve heard far too many white people toss out affirmative action as an excuse for why their little Einstein didn’t get into the school of their choice.

The Trump administration is preparing to redirect resources of the Justice Department’s civil rights division toward investigating and suing universities over affirmative action admissions policies deemed to discriminate against white applicants, according to a document obtained by The New York Times.

The document, an internal announcement to the civil rights division, seeks current lawyers interested in working for a new project on “investigations and possible litigation related to intentional race-based discrimination in college and university admissions.”

The announcement suggests that the project will be run out of the division’s front office, where the Trump administration’s political appointees work, rather than its Educational Opportunities Section, which is run by career civil servants and normally handles work involving schools and universities.

The document does not explicitly identify whom the Justice Department considers at risk of discrimination because of affirmative action admissions policies. But the phrasing it uses, “intentional race-based discrimination,” cuts to the heart of programs designed to bring more minority students to university campuses.

We know exactly who Trump and the GOP considers at risk of discrimination. Exhibit A: Abigail Fisher.

It’s true that the university, for whatever reason, offered provisional admission to some students with lower test scores and grades than Fisher. Five of those students were black or Latino. Forty-two were white.

Neither Fisher nor Blum mentioned those 42 applicants in interviews. Nor did they acknowledge the 168 black and Latino students with grades as good as or better than Fisher’s who were also denied entry into the university that year.

Everyone get that? Fisher and Blum only had a problem with the five black and Latino students, not the 42 white students who were offered admission over her. I could actually stop writing here, because my point is made. The only person demanding special treatment was mediocre student, Abigail Fisher. She deserved to get into UT because… well, according to her, just because. (Actually, the truth is she had mediocre grades and subpar SAT scores, but who cares about facts!)

Get ready for another Supreme Court case! (This time we’ll have Gorsuch!) Remember the comments from our justices last time?

Antonin Scalia: “There are those who contend that it does not benefit African-­Americans to to get them into the University of Texas where they do not do well, as opposed to having them go to a less-­advanced school, a less — a slower­-track school where they do well.

One of the briefs pointed out that most of the black scientists in this country don’t come from schools like the University of Texas. They come from lesser schools where they do not feel that they’re — that they’re being pushed ahead in — in classes that are too — too fast for them.”

Alito: “It’s kind of the assumption that if the—if a student—if a black student or a Hispanic student is admitted as part of the top 10-percent plan, it has to be because that student didn’t have to compete against very many whites and— and Asians.”

Anyway, just wanted to give you a refresher course on what’s about to come our way again. We’ll be subject to more sad stories from mediocre white kids. And never forget: Fisher and Blum only had a problem with the five black and Latino students, not the 42 white students who were offered admission over her. Why is that?

This is Trump and the GOP’s world. Sorry, but it’s all about Civil Rights. It’s what Trump specifically (it was the only part of his policy he provided specifics on, btw) ran on. It’s what Republicans always run on. It’s not a coincidence that he’s going after the LGBTQ community, immigration, affirmative action, telling police to rough up suspects, etc.. This is exactly why people voted for him. I wouldn’t be the least surprised if his poll numbers increased over this affirmative action move.