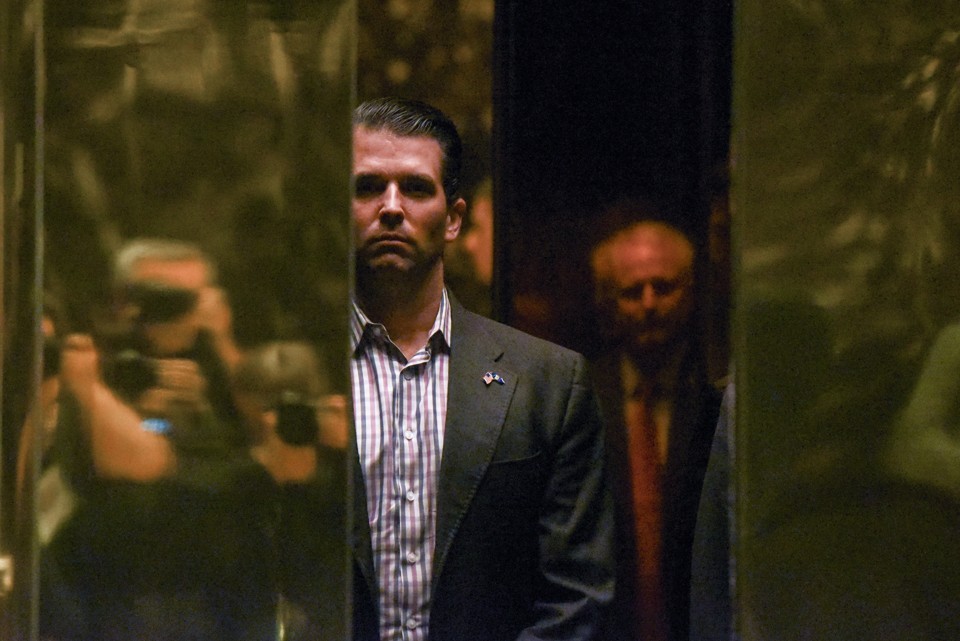 “Before arranging a meeting with a Kremlin-connected Russian lawyer he believed would offer him compromising information about Hillary Clinton, Donald Trump Jr. was informed in an email that the material was part of a Russian government effort to aid his father’s candidacy,” the New York Times reports.

“The email to the younger Mr. Trump was sent by Rob Goldstone, a publicist and former British tabloid reporter who helped broker the June 2016 meeting… Mr. Goldstone’s message, as described to The New York Times by the three people, indicates that the Russian government was the source of the potentially damaging information.”

“It does not elaborate on the wider effort by Moscow to help the Trump campaign… But the email is likely to be of keen interest to the Justice Department and congressional investigators, who are examining whether any of President Trump’s associates colluded with the Russian government to disrupt last year’s election.”

Josh Marshall makes a good observation on the news that Donald Trump Jr. met with a Russian lawyer promising “dirt” on Hillary Clinton during the presidential campaign:

“What I suspect is the most important detail in this story is the sources. The Times reports that they got the information from “three advisers to the White House briefed on the meeting and two others with knowledge of it.” They apparently talked after the release of the first story. This is highly, highly significant. Needless to say, advisors to the White House are not in the business of taking highly damaging stories and volunteering new information which makes them catastrophically damaging. The only reason a President’s allies ever do something like that is either to get ahead of something much more damaging or get a first crack at shaping the public understanding of something much more damaging. There’s really no other explanation. We don’t know yet what drove them to volunteer such highly damaging information. Five of them did it. It wasn’t a matter of one person going rogue.”

First Read: “By the way, maybe the most interesting Washington parlor game right now is trying to guess the sources for the New York Times story… So it’s coming from inside the White House – or from those who are advising it. Is this the beginning of every man and woman for themselves?”

Mike Allen: “Intent will be a crucial consideration in whatever special counsel Bob Mueller comes up with. So the reason for this meeting, the changing story, and the foot-dragging on disclosure are all going to matter. It’s why veteran Republicans operatives remain mystified that Trump’s orbit is going the drip-drip route rather than disclosing all at once what’s known about meetings with Russians.”

“Senate Republicans are hoping to unveil a revamped draft of their legislation to repeal and replace Obamacare by the end of this week, though there are major questions about how it will address roiling GOP disagreement over a proposal touted by conservative senators,” Politico reports.

“New bill text could be unveiled to senators as soon as Thursday… A Congressional Budget Office score is likely to follow as soon as next Monday; a vote could come by the end of next week.”

.@jaketapper: If contacts & conversations with Russians were so innocent, as claimed, why so many lies about them? https://t.co/ytTEoWe8l6 pic.twitter.com/1BVSwxjcXw

Bush ethics lawyer Richard Painter blasted Donald Trump Jr. for meeting with a Russian lawyer who claimed to have compromising information on Democratic nominee Hillary Clinton during the campaign, saying it “borders on treason,” The Hill reports.

Said Painter: “This was an effort to get opposition research on an opponent in an American political campaign from the Russians, who were known to be engaged in spying inside the United States.”

He added: “We do not get our opposition research from spies, we do not collaborate with Russian spies, unless we want to be accused of treason.”

The folks at First Read put together a timeline that places Donald Trump, Jr’s collusion and treason with Russian Natalia Veselnitskaya in context.

June 7: The 2016 primary season essentially concludes, with both Donald Trump and Hillary Clinton as the presumptive party nominees
June 9: Donald Trump Jr. — along with Jared Kushner and former campaign chair Paul Manafort — meets with Kremlin-connected lawyer Natalia Veselnitskaya.
June 9: Trump tweets about Clinton’s missing 33,000 emails
July 18: Washington Post reports, on the first day of the GOP convention, that the Trump campaign changed the Republican platform to ensure that it didn’t call for giving weapons to Ukraine to fight Russian and rebel forces
July 21: GOP convention concludes with Trump giving his speech accepting the Republican nomination
July 22: WikiLeaks releases stolen emails from the Democratic National Committee
July 25: Democratic convention begins
July 27: In final news conference of his 2016 campaign, Trump asks Russia: “If you’re listening, I hope you’re able to find the 30,000 emails that are missing”
August 4: Obama CIA Director John Brennan confronts his Russian counterpart about Russia’s interference. “[I] told him if you go down this road, it’s going to have serious consequences, not only for the bilateral relationship, but for our ability to work with Russia on any issue, because it is an assault on our democracy,” Brennan said on “Meet the Press” yesterday.
October 4: WikiLeaks’ Julian Assange says his organization will publish emails related to the 2016 campaign
October 7: Department of Homeland Security and the Director of National Intelligence release a statement directly saying that Russia is interfering in the 2016 election
October 7: WikiLeaks begins releasing Clinton Campaign Chair John Podesta’s emails
October 31: “This WikiLeaks is like a treasure trove,” Trump says on the campaign trail
November 4: “Boy, I love reading those WikiLeaks,” Trump says from Ohio.

“The poll found that, in a vacuum, voters in 10 battleground states are split almost evenly about Republican senate candidates — with 21% of voters viewing them favorably and 20% viewing them unfavorably. But when told their Republican senate candidates supported the GOP’s health care bill, voters turned sharply against their representatives. In that case, the candidates’ unfavorability rating jumps from 21% to 52%.”

Key finding: “After hearing criticisms of the Republican plan, voters in these Senate battlegrounds went from leaning toward voting the Democrat in 2018 by a healthy 48 to 38 margin, to leaning toward the Democrat by an even more robust 56 to 35 margin — an 11-point jump.”

72% of Dems say colleges/universities have positive impact on America. Share of R's saying same has crashed in just the last 2 years… pic.twitter.com/vM4KwC7Ye1

Jonathan Swan: “Conservatives are curiously zen about the debt ceiling hike, which points to a tectonic shift in the politics of debt now that we’ve entered the Trump Era. Not a single major conservative outside group is demanding the White House slash spending in exchange for their cooperation raising the debt ceiling (which will have to happen in October). Privately, most top Trump administration officials are delighted conservatives aren’t pressuring them.”

“One high-profile conservative leader — summing up a view I’m hearing across the movement — told me his group doesn’t think it’s a good idea to play chicken with Republican leadership and the President over the debt ceiling as they often did with Barack Obama.”

Larry Summers: “A corporate chief executive whose public behavior was as erratic as that of Mr Trump would already have been replaced. The standard for democratically elected officials is appropriately different. But one cannot look at the past months and rule out the possibility of even more aberrant behavior in the future. The president’s cabinet and his political allies in Congress should never forget that the oaths they swore were not to the defence of the president but to the defence of the constitution.”

At the moment, many foreign leaders are looking for ways to work around Washington and its rogue President. https://t.co/HMf1fArMqD

Playbook: “Let’s be brutally honest: there is a better than even chance Congress leaves town at the end of this month without a single major legislative achievement to talk about back at home. Not one. The Senate is squirming on health-care reform, and faces long odds in their quest to pass an overhaul to Obamacare. The $1-trillion infrastructure plan that, seven weeks ago, the Trump administration promised would be out in the ‘next several weeks’ has not come out. Tax reform is still in the hearing phase, and the Trump administration still says it will be done by the end of the calendar year.”

President Trump on Twitter: “I cannot imagine that Congress would dare to leave Washington without a beautiful new health care bill fully approved and ready to go!”

David Remnick: “So, yes, it is wrong to get ahead of the reporting. But the myriad implications of a hacked Presidential election, while too much to bear for the President—his ego seems to implode at any suggestion that his victory was possibly more complicated than the unambiguous ‘landslide’ he imagines it to be—demands the answers that journalists, law enforcement, and Congress are pursuing. Part of that process is admitting error, as CNN did, quickly and responsibly recently after an errant story. Part of that process is having the patience to see what the truth, as it emerges over time, turns out to be.”

“For now, we live in a moment when the President of the United States is, without shame, trying to intimidate the people whose business it is to come to an honest reckoning. He tries to intimidate the press. He has fired an F.B.I. director and considered going further. It’s reasonable to wonder why. Without assuming too much, too soon.”

Could Donald Trump have been elected as a Democrat? https://t.co/Y5IG4hDAEe pic.twitter.com/WzMp78a3eS

House Freedom Caucus chairman Mark Meadows (R-NC) told Brietbart that the federal spending bill — which needs to be passed by the end of September — must fund the construction of President Trump’s border wall or else there will be a government shutdown.

He also claims Trump backs his position: “My conversations with the President have led me to believe that there is nothing less than a full and total commitment on his part to only sign into law a funding bill that actually allows for us to start construction of a border wall on our southern border. He’s committed to do that. We’re committed to supporting him in that position.”

A new Monmouth poll finds just 15% of New Jersey adults approve of the job Chris Christie (R) is doing as governor while 80% disapprove.

Said pollster Patrick Murray: “It really is difficult to drive approval ratings into the single digits barring something like a criminal conviction. However, you have to admire Christie’s seeming tenacity for trying to get his numbers down to that level.”