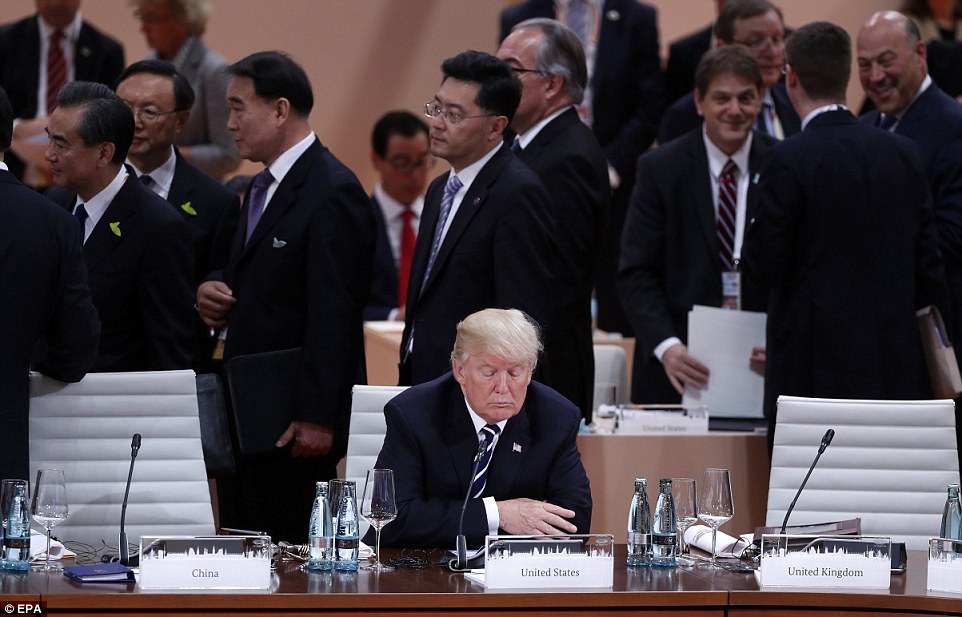 President Donald Trump’s insistence on running the country as if it were a family business continued Saturday when his daughter, Ivanka Trump, took his seat during a meeting of G20 leaders in Hamburg, Germany. When the U.S. president stepped away from a discussion for a bilateral meeting with his Indonesian counterpart, Ivanka Trump took his place. A photo posted on Twitter showed the 35-year-old unpaid adviser to the president sitting between Chinese President Xi Jinping and British Prime Minister Theresa May. German Chancellor Angela Merkel and Turkey’s President Recip Tayyip Erdogan were also nearby.   We are now, officially, a Banana Republic.

President's daughter filling in at this AM's #G20 – sitting next to Chinese President Xi (Photo/@LanaLukash) pic.twitter.com/kzl8eahobG

Two weeks after Donald Trump clinched the Republican presidential nomination last year, his eldest son arranged a meeting at Trump Tower with a Russian lawyer who has connections to the Kremlin, according to confidential government records described to the New York Times.

“The previously undisclosed meeting was also attended by Mr. Trump’s campaign chairman at the time, Paul Manafort, as well as the president’s son-in-law, Jared Kushner, according to interviews and the documents, which were outlined by people familiar with them.”

“While President Trump has been dogged by revelations of undisclosed meetings between his associates and Russians, this episode at Trump Tower on June 9, 2016, is the first confirmed private meeting between a Russian national and members of Mr. Trump’s inner circle during the campaign. It is also the first time that his son Donald J. Trump Jr. is known to have been involved in such a meeting.”

“If there’s a path for a Republican to challenge Donald Trump, it doesn’t run through Iowa. Sen. Ben Sasse’s foray this weekend into the first-in-the-nation caucus state has already sparked chatter about a potential 2020 GOP primary to unseat Trump. But Iowa’s top operatives say there’s no appetite, today, to see any Republican take on the president,” McClatchy reports.

“That hasn’t stopped Sasse, and his possible ambitions, from attracting attention in Iowa and nationwide, notably as Trump’s disapproval rating hovers around 60 percent and a smattering of Republicans around the country speak openly of their hopes for a run from someone like the Nebraska senator… Yet despite Trump’s myriad challenges and the angst his Twitter account causes in Washington, he remains so strong in conservative corners of Trump-friendly states, including Iowa, that party leaders, operatives and grassroots activists say there is no serious on-the-ground discussion of a 2020 challenge at this point.”

Republicans can't even agree on whether 22 million more people being uninsured is a bad thing, or means more freedom https://t.co/UieKIElLg5

“The White House and Senate Republican leaders are planning a final, urgent blitz to pressure reluctant GOP senators to pass an overhaul of the Affordable Care Act before their month-long August recess,” the Washington Post reports.

“Aware that the next 14 days probably represent their last chance to salvage their flagging endeavor, President Trump, Vice President Pence and Senate Majority Leader Mitch McConnell (R-KY) intend to single out individual senators and escalate a broad defense of the evolving proposal, according to Republicans familiar with their plans.”

New York Times: “A week that Senate Republicans had hoped would mobilize conservatives and shore up support for their measure to repeal the Affordable Care Act instead ended with eroding enthusiasm, as usually reliable Republican senators from red states blanched at its impact on rural communities.”

“For years the United States was the dominant force and set the agenda at the annual gathering of the leaders of the world’s largest economies,” the New York Times reports.

“But on Friday, when President Trump met with 19 other leaders at the Group of 20 conference, he found the United States isolated on everything from trade to climate change, and faced with the prospect of the group’s issuing a statement on Saturday that lays bare how the United States stands alone.”

Washington Post: “Normally a venue for drab displays of international comity, this gathering of economic powers saw clashes and talk of a possible transatlantic trade war. The tensions were also a warning signal of Washington’s diminished clout as leaders mounted a near-united opposition to U.S. policies.”

German Chancellor Angela Merkel became the unlikely viral star of this year’s G20 conference when she unleashed an epic eye roll at her Russian counterpart, Vladimir Putin. The two leaders were caught on camera right at the moment Merkel’s patience appears to have worn thin. When Putin appears to wag his finger at her, Merkel evidently rolled her eyes impatiently, a moment many women on Twitter immediately related to in what appeared to be an evident case of mansplaining.

Politico: “In very concrete terms, through speech and action, the president signaled a willingness to align the United States with Vladimir Putin’s worldview, and took steps to advance this realignment. He endorsed, nearly in its totality, the narrative the Russian leader has worked so meticulously to construct.”

Why didn't Republicans promise a real conservative health care plan? Because they're not idiots. https://t.co/RqJMIHwYUh pic.twitter.com/YjGXZBTKS5

World leaders have made clear the U.S.’s isolated stance on climate change, with 19 of the G20 countries affirming their commitment to the “irreversible” Paris climate agreement, the Guardian reports.

“After lengthy negotiations that stretched well into Saturday, the final G20 joint statement notes Donald Trump’s withdrawal from the Paris deal while stating that the world’s other major economies all still support the international effort to slow dangerous global warming.”

Donald Trump made himself the only alternative to things conservative voters tend to hate, writes Andrew Sullivan https://t.co/ZU4RFQNYWz

“Senate Republicans began this year thinking that they had leverage over some Democrats, particularly the 10 up for reelection next year in states that President Trump won last fall,” the  Washington Post reports.

“That didn’t happen. Instead, Trump’s standing has slipped in many of these states… That’s left Senate Democrats feeling stronger than they expected to be eight months after their highly disappointing showing in 2016, which left them in the minority and heading into 2018 defending 25 seats compared to the Republicans’ eight.”

“If Trump had spent his first six months increasing or even maintaining his popularity in these states, he might have struck enough political fear in these 2018 Democrats to compel them to support some of his initiatives.”

Bob Dreyfuss at Rolling Stone: “In the face of the intricately complex, three-dimensional chess problem that is North Korea’s accelerating nuclear threat, since his January inauguration President Trump has unleashed a machine gun-like burst of 140-character responses that display an unhinged, mercurial state of mind. It’s bad enough when one country is led by a leader who’s often appeared to be on the edge of mental illness – earlier this year, Sen. John McCain called Kim Jong-un a “crazy fat kid,” though Psychology Today deemed Kim “power-addled” but “rational.” In the case of the U.S-North Korea standoff, not only North Korea but the United States too is led by a man who exhibits a “dangerous mental illness,” according to a panel of psychiatrists at a Yale University conference, who called him “paranoid and delusional.”

None of this inspires confidence in the outcome of the growing tension between the two nuclear-armed states. The crisis itself is real: faster than anyone, including intelligence experts, expected, North Korea has developed and fired off an intercontinental ballistic missile with a range of more than 4,000 miles, making it capable of striking Alaska, and perhaps Hawaii. It has exploded nuclear weapons in tests five times, including twice in 2016, and its short- and medium-range missiles may already be capable of carrying atomic weapons to hit targets in South Korea and Japan, including American forces. It may have as many as 10 to 16 nuclear weapons already, according to the Center for Arms Control and Nonproliferation. And, by all accounts, Kim Jong-un has no intention of giving any of it up.”

"We have to focus less on Trump’s personal flaws and more on the world that has enabled him" Lots of smart pts here https://t.co/ygrGG2WmML