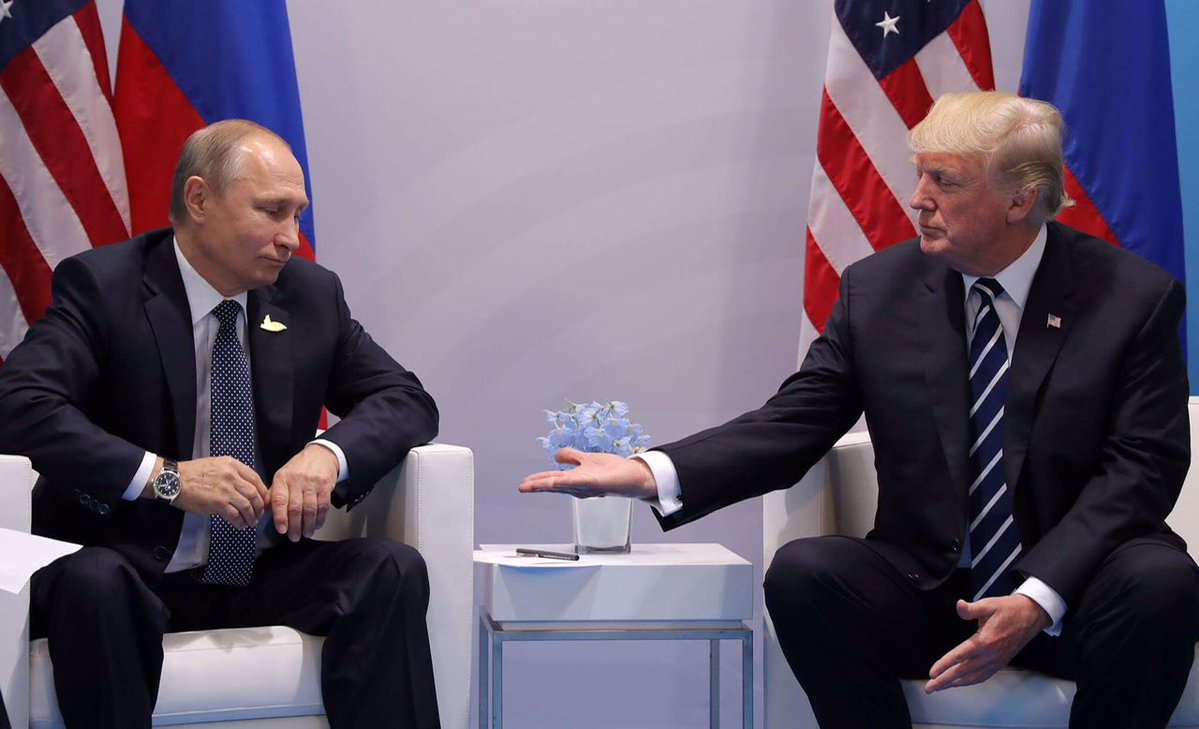 Wall Street Journal: “In a few weeks on the job, special counsel Robert Mueller has assembled an elite team of lawyers with expertise in national security, public corruption and financial crimes, suggesting he is taking a broad view of his mandate to probe Russia’s alleged meddling in the 2016 election.”

“Highlighting the sensitive nature of his work, Mr. Mueller’s office moved a few weeks ago from a nondescript Washington office building to a nearby ‘secure facility.’”

Which was it?   Given what the President said in his Warsaw Press Conference on Thursday, I tend to believe the Russians in that the President accepted Putin’s denial. Because Trump has been denying it too.

Even if you accept Tillerson readout, Trump never threatened Russia with punishment for past or future election interference. Big Putin win.

“The debt regulations were part of the Obama administration’s attempt to address inversions, the corporate technique of putting a headquarters address outside a country. The rules made it harder for companies to engage in the practice known as earnings stripping, in which they load up the U.S. operations with debt and reduce U.S. taxes.”

Sen. Ted Cruz (R-TX) said “that he agrees with President Trump: If Republican senators are unable to pass a bill to repeal and replace key parts of the Affordable Care Act, the Senate should vote on a narrower bill to simply repeal the law and work on a replacement later,” the Washington Post reports.  Said Cruz: “If we cannot bring the conference together and agree on repeal legislation, then I think President Trump’s absolutely right that we should pass a clean repeal.” Cruz said such a repeal should be delayed “either a year or two years” to give lawmakers time to work on a replacement.

In the meantime, Cruz has proposed an amendment to Trumpcare that allows insurance companies to sell two types of healthcare policies, one that is compliant with the Affordable Care Act and one that is not.  Sen. Chuck Grassley (R-IA) told Iowa Public Radio that he probably won’t support this amendment because he’s concerned how Cruz’s amendment might affect people with pre-existing conditions.”

McClatchy: “Whether it’s the Trump National Golf Club in Bedminster, N.J., where the U.S. Women’s Open Golf Championship starts Monday; the club outside the nation’s capital, where the president often spends time over the weekend; the historic Mar-a-Lago Club, where he hosted the president of China and the prime minister of Japan; or one of his other exclusive addresses, each collects a hefty initiation fee from new members — up to $450,000 per person, with annual dues on top of that.”

“Trump has benefited greatly from these initiation fees for years. Even back when it was typical for membership fees to take the form of refundable deposits, he broke with the norm for such clubs by taking the money for himself, according to documents and interviews.”

Don't give Trump the benefit of the doubt. He's grateful Russia interfered for him and wants them to do it again. https://t.co/u4DE4OncTk

Politico: “National security officials across the federal government say they are seeing new restrictions on who can access sensitive information, fueling fears in the intelligence and security community that the Trump administration has stepped up a stealthy operation to smoke out leakers. Officials at various national security agencies also say they are becoming more concerned that the administration is carefully tracking what they’re doing and who they’re talking to — then plotting to use them as a scapegoat or accuse them of leaks.”

“One U.S. official voiced concern over even talking to their superiors about a benign call from a reporter. The agency this official works for had started limiting staff’s access to information, they said, and it would make it far easier to figure out who was talking to people in the media. There was suspicion, the official said, that the agency was even tracking what they printed, to keep tabs on what information they were accessing.”

The Constitution doesn't tell us what to do if the president colluded with Russia. https://t.co/aISX4lNQHa

New York Times: “California’s very junior senator has emerged as the latest iteration of a bipartisan archetype: the Great Freshman Hope, a telegenic object of daydreaming projection — justified or not — for a party adrift and removed from executive power… Like the Senate newcomers Barack Obama or Marco Rubio before her, Ms. Harris — a 52-year-old former prosecutor with a profane streak, a lawyerly aversion to ‘false choices’ and an affection for the rapper Too Short — has insisted that national aspirations are far from her mind. Like those men, she has not exactly ruled out the possibility, either.”

“Unlike those men, she is not a man, a fact that has figured prominently in her introduction to mass audiences in a recurring (and highly rated) television series: Senate Intelligence Committee Hearing Into Possible Trump Ties to Russia. Twice recently, Ms. Harris’s pointed questions and interjections during long-winded witness testimony have prompted uncommon interruptions from Republican colleagues, John McCain of Arizona and Richard M. Burr of North Carolina, the committee chairman, urging her to let the officials answer. In the outsize fallout, her supporters have questioned whether a white male senator would have been confronted the same way.”

The collusion is happing before our eyes. https://t.co/5OjMLbYEIb

David Nather: “This is why Senate Republicans are having so much trouble with the health care bill. The Republican health care effort is the most unpopular legislation in three decades — less popular than the Affordable Care Act when it was passed, the widely hated Troubled Asset Relief Program bank bailout bill in 2008, and even President Bill Clinton’s failed health reform effort in the 1990s. That’s the verdict from MIT’s Chris Warshaw, who compiled polling data from the Roper Center on major legislation Congress has passed since 1990.”

“It’s rare for Congress to move ahead with legislation when the signs are this clear that the public doesn’t want it. Clinton’s health care plan never got a floor vote in the House or Senate, and neither did President George W. Bush’s plan to partially privatize Social Security.”

"Trump, in other words, may have done more damage by meeting with Putin than he would have done by staying home." https://t.co/GZrq1S65vE

David Wasserman: “This is a tricky point in the election cycle to begin making predictions. On one hand, the danger signs are everywhere for the GOP: President Trump’s approval is mired in the high 30s, and support for the AHCA’s legislation is stuck in the high teens, and Democrats have been significantly over-performing—despite falling short—in a broad array of special elections. They also lead most national generic ballot tests by high single digits.”

“Race by race, the data isn’t much better for Republicans. Multiple public and private polls now show House Republican incumbents who won by wide margins last fall tied with or trailing real and hypothetical opponents… Taken as a whole, the evidence would seem to point to a wave election that would justify moving a slew of races into the Toss Up column and threaten GOP control of the House.”

“Except, the election isn’t this November; it’s still 16 months away. The fact these warning lights are flashing now means Republicans won’t be caught off guard like many incumbents were in 2006 and 2010—they will have time to raise millions, conduct opposition research and define their opponents early.”

Bloomberg Businessweek runs an excerpt of Devil’s Bargain: Steve Bannon, Donald Trump, and the Storming of the Presidency by Joshua Green.

Donald Trump had been thinking about running for president for more than 20 years before he locked onto the twin issues of race and immigration that vaulted him to the White House. Trump’s presidency, and the toxic civic culture it ushered in, will forever be linked to these issues.

History could have been different. While Trump always displayed populist instincts, his opinions on national affairs tended to reflect the views of a New York Democrat, which was, after all, the world he inhabited. It’s almost impossible to imagine now, but in the period just before he entered politics, Trump’s appeal to blacks and Hispanics was powerful enough to make him the darling of corporate America. Although he was not a politician, Trump’s multicultural appeal was an achievement that a sclerotic Republican Party was increasingly desperate to match.

One reason this story has never been told is because Trump decided he’d be better served politically by destroying this legacy. He wasn’t exactly wrong: His “birther” attack on President Obama in 2011, when Trump was eyeing a 2012 run, marked a sharp pivot on race and then immigration that enabled his remarkable rise to the presidency.

Trump has 3 options for dealing with North Korea. They're all bad. https://t.co/Qupn5c4chK pic.twitter.com/1ipwH8PTcU

Roughly 20 military veterans have announced they are planning to run as Democrats for the House of Representatives next year, the New York Times reports.

“Democratic Party leaders are aggressively seeking former members of the military in hopes of increasing their appeal among the sort of frustrated voters who elected President Trump — and winning back the 24 seats they need to regain the Republican-controlled House.”