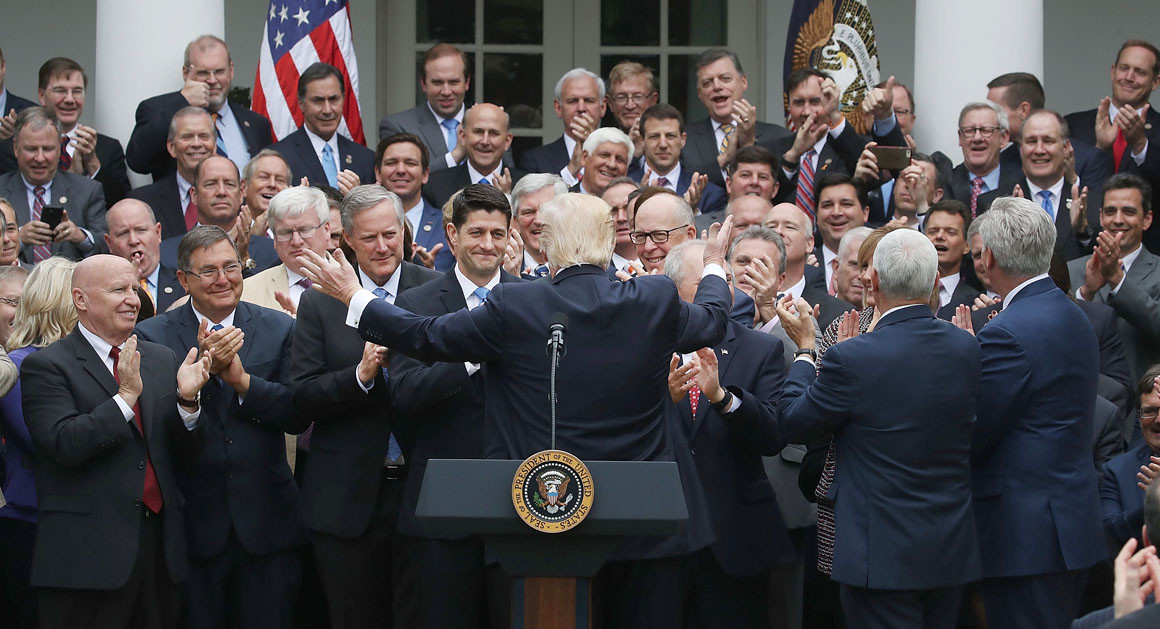 New York Times: “When members of Congress return next week from their Fourth of July break, they will be greeted by a mammoth legislative logjam. Republicans are increasingly skeptical that they can get everything done. There are even calls from some to forgo their sacred August recess — a respite from the capital in its swampiest month.”

“The Republican Party is under intense pressure to achieve something of consequence in that limited time in order to legitimately claim that the first year of the Trump administration has been a success. So far, the ambitious agenda has stagnated without a signature achievement. President Trump’s unpredictability has only made matters more complicated.”

Budget expert Stan Collender says that the “legislative political pain” over the next few months for Republicans “will be both intense and unrelenting.”  There are four things that should concern Republicans:

Health Care: “Senate Republicans will return to Washington either to pass legislation that, as Susan Page and Emma Kinery reported in USA Today, is enormously unpopular, or will fail to do something they have been promising their voters for the better part of a decade they would get done.”

The Budget: “For the Trump administration and the House and Senate Republican leadership, not adopting a 2018 congressional budget resolution will be a political disaster… No budget resolution means no tax reform this year. That’s why… House Ways and Means Committee Chairman Kevin Brady (R-TX) last week started to call the still-nonexistent budget resolution the ‘tax-reform budget,’ essentially telling his GOP colleagues that their spending decisions don’t matter; just pass anything so tax reform can move forward.”

Debt Ceiling: “Depending on which member of the Trump administration you listen to and when you listen to him, the federal debt ceiling has to be raised before the start of the August recess, should be raised by the start of the August recess but the federal government will have enough cash to operate until mid-September or the real date the debt ceiling has to be increased is sometime in mid-October.”

Multiple Votes: “The political pain from all of the above will be exacerbated because Congress probably will have to take multiple votes on each of these excruciating issues.”

Sen. Susan Collins says she was thanked over and over again for opposing GOP health bill at today's parade. https://t.co/dU2kR5WcXi pic.twitter.com/zlbD6Wtts1

“Democratic leaders are zeroing in on a new mantra for their long-promised economic agenda: the ‘Better Deal,’” Politico reports.

“The rebranding attempt comes as Democrats acknowledge that simply running against President Trump wasn’t a winning strategy in 2016 and probably won’t work in 2018 either. The slogan, which is still being polled in battleground House districts, aims to convince voters that Democrats have more to offer than the GOP and the self-proclaimed deal-maker in the White House.”

Once and for all: Obama didn’t crush US coal, and Trump can’t save it https://t.co/5s6SxEVY2t

President Trump’s voter fraud commission “may have violated the law by ignoring federal requirements governing requests for information from states,” The Hill reports.

“Under the Paperwork Reduction Act, information requests from agencies and other federal entities are supposed to first be submitted to the Office of Management and Budget’s Office of Information and Regulatory Affairs (OIRA). This 1980 law requires federal agencies to seek public input, including through a comment period, before a request for information.”

Rick Hasen: “The Trump commission process has been so poorly handled that whatever it concludes will be likely ignored by serious people, even while the president latches onto it to make it harder for people to register and vote. He’s overplayed his hand, and we should be thankful for that.”

The Trump Organization has renewed its claim on more than 1,000 of the web domains registered by its general counsel, including some politically sensitive websites such as TrumpRussia.com and TrumpTowerMoscow.com, Politico reports.

A chart from GOP strategist Adrian Gray clearly shows that Republican optimism about the direction of the country has been in free fall since early May.

The RNC is out with a new ad criticizing Democrats for failing to put forward their own plan to fix Obamacare and urging them to work with Republicans to reform the healthcare system, the Washington Examinerreports.

Stuart Rothenberg: “There are plenty of problems with the video, but by far the biggest are that (1) Americans are not now clamoring for Congress to repeal Obamacare and (2) it is unlikely that Democrats need a plan to replace it. The replacement question is crucial, and the RNC is simply way off base, if history offers any lessons.”

“When one party controls the White House and both houses of Congress, voters have always blamed that party for what it has done or not done. That’s why midterm electoral waves have tended to occur during the intersection of political dissatisfaction and one-party control, which is exactly what happened in 1958, 1994, 2006 and 2010.”

“The party in power during a midterm almost always tries to blame the opposition. Sometimes the focus is on the previous president. Sometimes it is on the opposition party’s congressional leadership or its alleged ‘obstruction.’ But a party in trouble with voters always looks to blame someone else.”

The best response to this RNC ad asking where was the Democrats’ plan?

Right here. Includes radical provisions like how not to kick 23 mil ppl off their coverage. Feel free to run w/it.https://t.co/jBMFBJpSP7 https://t.co/zZoA16Ym03

“President Trump and key global leaders are on a collision course ahead of the Group of 20 summit in Germany this week, with Trump’s unapologetic ‘America First’ mantra on trade and climate change running into emboldened, and increasingly united, opposition overseas,” the Washington Post reports.

“Trump reiterated his threats on Wednesday to pull the United States back from existing trade deals, arguing they were against the national interest. As Trump threatens to retreat from global trade, other world powers are exploring new economic ties.”

“The European Union and Japan are expected on Thursday to announce plans for a major new free trade agreement… If completed, the E.U.-Japan trade deal would be a sign of other top economies adjusting to a new world order in which they attempt to work around the United States instead of looking to it for direction on building global trade.”

“The spread of Russian-made fake news stories aimed at discrediting Hillary Clinton on social media is emerging as an important line of inquiry in multiple investigations into possible collusion between the Trump campaign and Moscow,” the Guardian reports.

“Investigators are looking into whether Trump supporters and far-right websites coordinated with Moscow over the release of fake news, including stories implicating Clinton in murder or pedophilia, or paid to boost those stories on Facebook.”

Officials at the Auschwitz-Birkenau Memorial and Museum have criticized Rep. Clay Higgins (R-LA) for narrating part of a five-minute video from inside a former gas chamber at the Nazi concentration camp in Poland, the AP reports.

“A post on the Auschwitz Memorial’s official Twitter account said Tuesday that a former gas chamber is not a stage but a place where there should be respectful silence. Later Tuesday, it posted a photo of the entrance sign to that building, asking visitors to ‘maintain silence here.’”

Mike Allen: “Events in this madcap West Wing have conspired to give Bannon back much of his mojo: He’s clearly going to stay, after being long rumored to be on the outs. He’s no longer in a hot war with Jared Kushner. He played a key role in developing the Russia response. And he’s back to pushing ideas the GOP establishment hates, including a tax hike on the rich and trade wars.”

“Bannon’s insurance policy is that he’s the keeper of the base. Trump understands he’s never going to be broadly popular, so he absolutely has to preserve his 46%.”