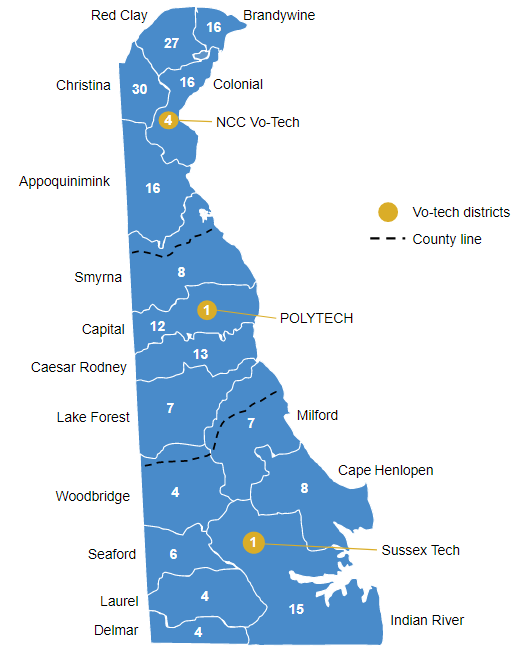 Last week, House Concurrent Resolution 39 passed both the Senate and House.  It establishes Dover’s favorite thing in the whole wide world, a task force.  That task force will look at the impact of consolidating school districts in the state of Delaware.

Above is a map of the current school districts.  There are 19 districts in Delaware that range from 15,000 students to 1,200 with varying administrative costs.  The number in each district above shows the number of total schools in that district.  Visually, given the number of schools, and without knowing anything else (a risky proposition, granted), I would consolidate the districts as follows:

I have taken all of Christina’s schools in Wilmington and placed them in Red Clay.  Yes, I know there are problems with the finances of that (giving Christina a funding boast and putting Red Clay in a hole) and that will have to be worked out. But it just makes sense geographically. In total, 19 school districts have been consolidated down to eight.  Sussex County, home of Delaware’s conservatives, had the most inefficient set up. They previously had SEVEN school districts serving a population that is roughly equally to Red Clay and Brandywine combined.   Yeah, those downstate conservatives are going to learn about efficiency, because they are only going to get two school districts.

The Smyrna School District is absorbed by Appoquinimick, and Casear Rodney swallows Lake Forest and Capital.