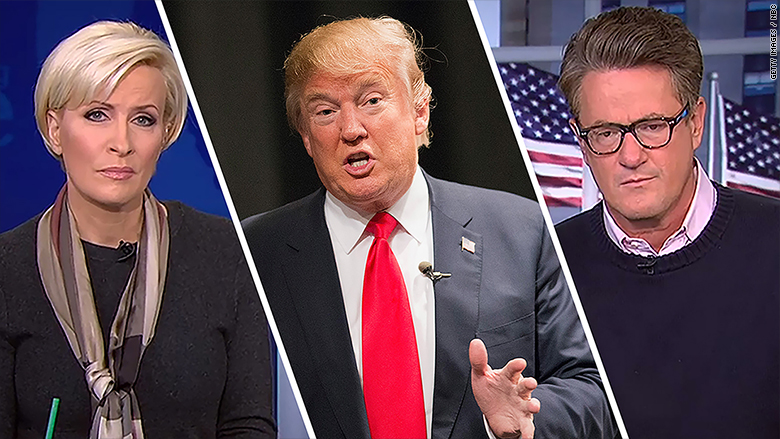 Joe Scarborough said that “three people at the very top of the administration” threatened him with a bad story in the National Enquirer unless he apologized to President Trump, CNN reports.

Said Scarborough: “We got a call that, ‘Hey, the National Enquirer is going to run a negative story against you guys…’ And they said, ‘If you call the president up, and you apologize for your coverage, then he will pick up the phone and basically spike this story.”  He added: “The calls kept coming and kept coming, and they were like ‘Call. You need to call. Please call. Come on, Joe. Just pick up the phone and call him.’”

When Trump denied it on Twitter, Scarborough responded: “Yet another lie. I have texts from your top aides and phone records. Also, those records show I haven’t spoken with you in many months.”

New York Magazine reports that Joe Scarborough’s main point of contact in the White House about a threatened National Enquirer story was Jared Kushner. It was Kushner who told Scarborough that he’d have to personally apologize to Trump in order to have the story spiked.  An NBC News spokesman told CNN that Scarborough kept several network executives apprised of the alleged threats “contemporaneously.”

First Read: “It’s not just health care that Senate Republicans are hoping to get back on track after they return from their July 4 vacation. President Trump and Congress have a lot on their plate before their summer recess in August — raising the debt limit, passing a budget, moving on tax reform. It’s a daunting agenda during the best of times. And it’s much, much harder with a distracted president, a commander-in-chief whose approval rating is in the 30s and 40s, and a GOP Senate that remains divided over health care.”

Vox: “Congressional conservatives see an opportunity to push for more than $200 billion in cuts to welfare programs, including Temporary Assistance for Needy Families (TANF) and food stamps (SNAP), that serve as a safety net for the nation’s most vulnerable population — on top of cuts already being pursued in the health care bill.”

“This group of conservatives, the House Freedom Caucus, recently emboldened by extracting key concessions from Trump in order to pass his health care bill through the House last month, is feeling the strength of its leverage over the party — it knows that without its members’ votes, the budget resolution is doomed, and with it, for the next year at least, any hope of passing tax reform through the Senate on a strictly party-line vote.”

SPOT ON. @PeterBeinart explains Trump's grudges & attacks aren't a distraction from his agenda. They are his agenda. https://t.co/1JRO14J7na

Politico: “A group of 10 senators is sending a letter to Senate Majority Leader Mitch McConnell (R-Ky.) on Friday morning asking for the GOP leader to shorten the August recess — or cancel it altogether — if the party does not make significant headway on its priorities in July… The letter comes right after Congress left Thursday and scattered across the country for a July 4 recess.”

Axios: “Senate Republicans didn’t get a health care deal nailed down before leaving town — but they don’t want to lose momentum, so they’re going to send the Congressional Budget Office some broad outlines of a new bill to look at over the recess. If that sounds like an anticlimax, and you expected more, you haven’t been watching Senate Republicans for the last two months.”

“Senators were still all over the map yesterday on a handful of key provisions…. But aides said they can send the broad strokes over to CBO now, and fill in the gaps later. They have to get the ball rolling today in order to have a score by the middle of July, and a vote before the August recess.”

Six months in, its clear Trump’s only consistent message is to destroy the media https://t.co/uARVbVnDcx

Mike Allen: “In a plan pushed by Commerce Secretary Wilbur Ross, and backed by chief strategist Steve Bannon (not present at the meeting), trade policy director Peter Navarro and senior policy adviser Stephen Miller, the United States would impose tariffs on China and other big exporters of steel. Neither Mike Pence nor Jared Kushner weighed in either way.”

“Everyone else in the room, more than 75% of those present, were adamantly opposed, arguing it was bad economics and bad global politics. At one point, Trump was told his almost entire cabinet thought this was a bad idea. But everyone left the room believing the country is headed toward a major trade confrontation.”

“The reason, we’re told: Trump’s base — which drives more and more decisions, as his popularity sinks — likes the idea, and will love the fight.”

Associated Press: “If President Donald Trump were anyone else, he’d be fired, or at least reprimanded, for his latest tweets attacking a female TV host, social media and workplace experts say.”

“And if he were to look for a job, the experts say, these and past tweets would raise red flags for companies doing social media background checks, an increasingly common practice as tweets and Facebook posts become a daily, sometimes hourly part of our lives.

In his desperation to hold on to his dwindling base, Trump might ignite global trade war. https://t.co/jCspuLfdBp

President Trump tweets this morning: “If Republican Senators are unable to pass what they are working on now, they should immediately REPEAL, and then REPLACE at a later date!”

Jonathan Swan: “It’s literally the opposite of what then president-elect Trump told Paul Ryan after he won the election and shortly before Congress went into session. Part of the reason why the House GOP leadership didn’t run with a clean repeal vote, as they’d done many times under President Obama, was because Trump had made it clear to Ryan he wouldn’t sign the bill.”

“[This is] a non-starter for many congressional Republicans who don’t want to scrap a plan that’s covering millions of Americans without something to take its place,” Politico reports.  “Repealing the health law without a replacement would kick about 18 million Americans off of health coverage in the first year — and reach 26 million a few years later, according to a CBO analysis of a 2015 bill to repeal the health law without a replacement.”

New York Times: “Hoping to revive their repeal bill, Senate Republicans said on Thursday that they were seriously considering proposals to keep one of the law’s taxes on high-income people while providing more money to combat the opioid epidemic and a new incentive for people to establish tax-free savings accounts for medical expenses. Ms. Collins said Republican leaders and the Trump administration had agreed to $45 billion for an opioid treatment fund.”

“Republicans also said they were considering a proposal that would allow insurers to sell cheaper, less comprehensive health plans if they also offered at least one plan that complied with consumer protection standards like those in the Affordable Care Act.”

Republicans have stumbled backwards upon the only big health care idea they’ve ever had. https://t.co/mBe5PUsQz8

A source tells the New York Post that President Trump “ran around the West Wing yesterday asking staff what they thought of his tweet.”  Said Trump: “I know it wasn’t presidential, but what did you think?”

Philip Bump: “Hmm? You didn’t know it was Energy Week? Well, surely you didn’t think that the White House would not declare a theme for the week of June 26 to 30 after naming Infrastructure Week, Workforce Development Week and Technology Week, right? Oh, you didn’t know about those either?”

“Well, I guess I can’t really blame you. After all, it’s not totally clear that President Trump knew that there were themes to each week, either.”

"as vile and painful as the president’s tweets often are, they’re performing an important role in American democracy https://t.co/PMF5esBfAC

The poll numbers for Senate Republican candidates take an approximately 30-point hit when voters learn they’re supporting their party’s bill to repeal and replace Obamacare, according to a poll set to be released on Friday.  The poll found that, in a vacuum, voters in 10 battleground states are split almost evenly about Republican senate candidates — with 21 percent of voters viewing them favorably and 20 percent viewing them unfavorably.  But when told their Republican senate candidates supported the GOP’s health care bill, voters turned sharply against their representatives. In that case, the candidates’ unfavorability rating jumps from 21 percent to 52 percent, according to the new polling from Priorities USA and Senate Majority PAC.