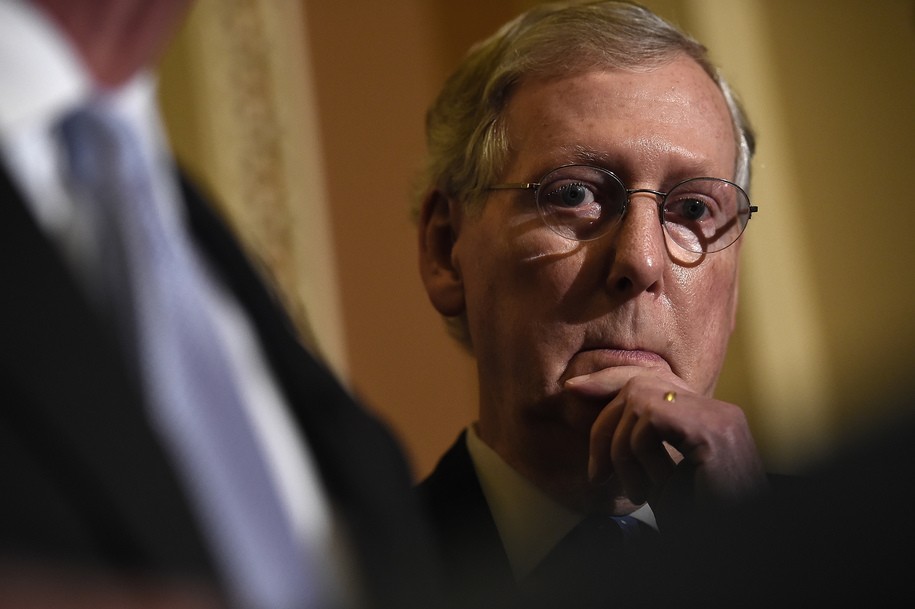 Senate Majority Leader Mitch McConnell (R-KY) will delay the vote on Trumpcare until after the July 4 recess, Politico reports.

Axios: “Majority Whip John Cornyn had said earlier that the vote was going ahead. But ultimately, the decision is McConnell’s — and he was getting too much pushback from Senate Republican holdouts who said they weren’t ready to vote this quickly, without changes to the bill.”

Chris Cillizza: “The longer a bill sits out without a vote, the bigger pinata it becomes to its detractors, who find new and different things to object to it. That’s especially true for a recess week, which Republicans are headed into this weekend. And while the idea of more time allowing wavering members to be convinced sounds like capital “D” democracy, usually the members wavering have mostly made up their minds.”

But, McConnell has set a new deadline.  “Senate Republicans have been tasked with reaching a new health care agreement by Friday,” Axios reports.  “A new draft bill can then be sent to the Congressional Budget Office for analysis over next week’s recess, and then the Senate will vote on the bill when it returns.”

McConnell “is delivering an urgent warning to staffers, Republican senators and even the president himself: If Obamacare repeal fails this week, the GOP will lose all leverage and be forced to work with Chuck Schumer,” Politico reports.

“McConnell delivered a similar warning Monday to Republican senators at his leadership meeting and to top GOP staffers, warning that Democrats will want to retain as much of Obamacare as possible in a bipartisan negotiation, according to Republican aides.”

Mike Allen: “We hear that Senate Majority Leader Mitch McConnell is warning Republicans that there’ll be a political and policy price to pay if healthcare goes down — that failure would have painful implications.”

“Senators are being told it’s not possible to just let Obamacare fail — that if the Better Care bill fails, Rs will have to work with Ds (horrors!) later this year to help shore up the exchanges. That would require Republicans making big concessions on important priorities.”

We've seen this movie before. This is a replay. The outrage over recess must be fierce and overwhelming. https://t.co/X646CmpOGy

Exactly.  Do not get complacent, or think we have scored a victory like we did before.   Keep making your calls.  Senate Minority Leader Chuck Schumer (D-NY) on Tuesday said Democrats will keep fighting Senate Republicans’ proposal to repeal parts of Obamacare, after Republican leaders announced that a vote on the bill will be delayed until after the July 4 recess.  “We know the fight is not over, that is for sure,” Schumer said at a press conference after Senate Majority Leader Mitch McConnell (R-KY) announced the delay. “We’re not resting on any laurels, nor do we feel any sense yet of accomplishment.”

Schumer said Senate Republicans will continue trying to corral enough votes to pass the proposal. “Over the next couple of weeks, we know that Leader McConnell will try to use a slush fund to buy off Republicans, cut back-room deals, to try and get this thing done,” he said.

A Time Magazine with Trump on the cover hangs in his golf clubs. It’s fake. // from the great @fahrenthold https://t.co/qLk3Ss2oIg

Washington Post: “This cover — dated March 1, 2009 — looks like an impressive memento from Trump’s pre-presidential career. To club members eating lunch, or golfers waiting for a pro-shop purchase, it seemed to be a signal that Trump had always been a man who mattered. Even when he was just a reality-TV star, Trump was the kind of star who got a cover story in Time.”

1. I've spent a few weeks digging into TMZ's political coverage. Talked to a number of current and former staffers https://t.co/yliJEQsliu

Judd Legum: “Trump was the ideal vehicle for TMZ to break into political coverage. A reality TV host and a creature of celebrity culture pursues the most powerful position in the world — all while dishing out TMZ-friendly sound bites on a daily basis.”

“As Trump has risen, TMZ has quietly emerged as, arguably, the most important pro-Trump outlet in America. Fox News is the largest and best known, but its audience is older and already inclined to support Trump. Breitbart is the most aggressive and strident, but its connection to white nationalism limits its appeal. TMZ attracts a large and diverse audience — precisely the folks Trump needed to reach to stitch together a winning coalition.”

“Stories on TMZ not only gain a wide audience online but also appear on two nationally syndicated daily television shows (TMZ and TMZ Live) that, in most markets, are aired multiple times each day.”

Rick Hasen: “Whatever else comes of the Donald J. Trump presidency, already he has perfectly fulfilled one campaign pledge in a way that will affect the entire United States for a generation or more: putting another Antonin Scalia on the Supreme Court. The early signs from Justice Neil Gorsuch, who joined the Court in April, show that he will hew to the late Justice Scalia’s brand of jurisprudence, both in his conservatism and his boldness.”

“Usually it takes a few years to get the full sense of a new justice. The job provides awesome power, and new justices often are reluctant to issue stark opinions or stake out strong positions early on… Not so with Gorsuch. In a flurry of orders and opinions issued Monday, Gorsuch went his own way.”

Contra @KellyannePolls claims, the GOP bill would cut Medicaid spending by $772 billion, per the CBO. pic.twitter.com/gUdRSSuhay

Rick Klein: “It’s not just the distractions – ‘witch hunt’ talk and Syria threats that are rolling out with equal apparent presidential focus – but the lack of any discernible White House ideology that has, or should have, Republican senators concerned. President Trump has been for just about every iteration of the health care bill. Now he wants lawmakers to have faith both that he will stay committed to the latest Senate version of the bill – which, like every other version, breaks multiple presidential promises — and stand by them to defend their votes as … what exactly?”

“The efforts of his outside political arm have been neutral, at best, so far, and could wind up being downright harmful to efforts to pass a bill. The president has so often blamed others for his political problems: former President Obama, Hillary Clinton, James Comey, the intelligence community, Congress, Democrats, some Republicans, and, of course, the courts…. Republicans have the power to give him his top legislative priority this week, on health care. Now, though, the president needs his allies to trust him. That means trusting Trumpism over all else, a tough argument to make under the best of circumstances.”

Around the world, favorability of the U.S. and confidence in its president decline. via @pewresearch https://t.co/Dbcd49tPYe

“Although he has only been in office a few months, Donald Trump’s presidency has had a major impact on how the world sees the United States. Trump and many of his key policies are broadly unpopular around the globe, and ratings for the U.S. have declined steeply in many nations. According to a new Pew Research Center survey spanning 37 nations, a median of just 22% has confidence in Trump to do the right thing when it comes to international affairs.”

“This stands in contrast to the final years of Barack Obama’s presidency, when a median of 64% expressed confidence in Trump’s predecessor to direct America’s role in the world.”

“First, conservative policy intellectuals tend to have accepted the fact that American society is coming apart and that measures need to be taken to assist the working class. Republican politicians show no awareness of this fact. Second, conservative writers and intellectuals have a vision for how they want American society to be in the 21st century. Republican politicians have a vision of how they want American government to be in the 21st century…”

(2) WP has revealed the FBI interviewed Page *five times* in March about his July and December 2016 trips to Moscow. https://t.co/HlKvdcm3OU

“FBI agents have repeatedly questioned former Trump campaign adviser Carter Page about his contacts with Russians and his interactions with the Trump campaign,” the Washington Post reports.

“Over a series of five meetings in March, totaling about 10 hours of questioning, Page repeatedly denied wrongdoing when asked about allegations that he may have acted as a kind of go-between for Russia and the Trump campaign.”

“Because it is against the law for an individual to lie to FBI agents about a material issue under investigation, many lawyers recommend their clients not sit for interviews with the bureau without a lawyer present. Page said he spoke without a lawyer and wasn’t concerned about the risks because he told the truth.”

“The Pentagon is considering a plan to cancel enlistment contracts for 1,000 foreign-born recruits without legal immigration status, knowingly exposing them to deportation,” the Washington Post reports.

“The undated action memo, prepared for Defense Secretary Jim Mattis by personnel and intelligence officials at the Pentagon… describes potential security threats of immigrants recruited in a program designed to award fast-tracked citizenship in exchange for urgently needed medical and language skills.”

Wow. This entire exchange at the WH briefing. Must watch. https://t.co/ZxEEe6e31P

The White House said that President Bashar al-Assad of Syria appeared to be preparing another chemical weapons attack, and warned that he would “pay a heavy price” if one took place, the New York Times reports.

“Several military officials who were reached late Monday said they had been caught off guard by the White House statement, but it was unclear how closely held the intelligence regarding a potential chemical attack was.”

Buzzfeed News: “Five defense officials… said they not only did not know where the potential chemical attack would come from, but they were unaware the White House was planning to release the statement.”

Sarah Kliff: “The CBO report is a dense 49-page document that you can read here. But you can find its clearest explanation of the Senate bill on page 48. This is where the CBO report explains how premiums would change for low- and middle-income Americans — and what type of health insurance they would get for those monthly payments.”

“This page shows, in no uncertain terms, that low-income Americans would be asked to pay higher premiums for worse health insurance coverage.”

Yahoo reports that a donor from Texas, Doug Deason, has “refused to host a fundraiser for two members of Congress and informed House Majority Leader Kevin McCarthy, R-Calif., his checkbook is closed as well”

Deason told GOP leaders: “Get Obamacare repealed and replaced, get tax reform passed. You control the Senate. You control the House. You have the presidency. There’s no reason you can’t get this done. Get it done and we’ll open it back up.”

Rick Hasen: “There was a lot of dissembling when Justice Gorsuch was nominated to the Supreme Court, that he was some kind of blank slate, without preconceived ideas about how he would rule as a Supreme Court Justice. Of course, this was a ruse to blunt public criticism. Many of us knew that he would be a very conservative Justice—the only question is if he will be more like Scalia, Thomas, or Alito.”

“Justice Gorsuch has been on the Court only a few months, and only heard one month’s worth of oral arguments. But today, on the last day of the Supreme Court’s term, we got a very good indication he will be most like Justice Scalia, and often voting with Justices Thomas and Alito, making Justice Gorsuch one of the most, or most, conservative Justices.”