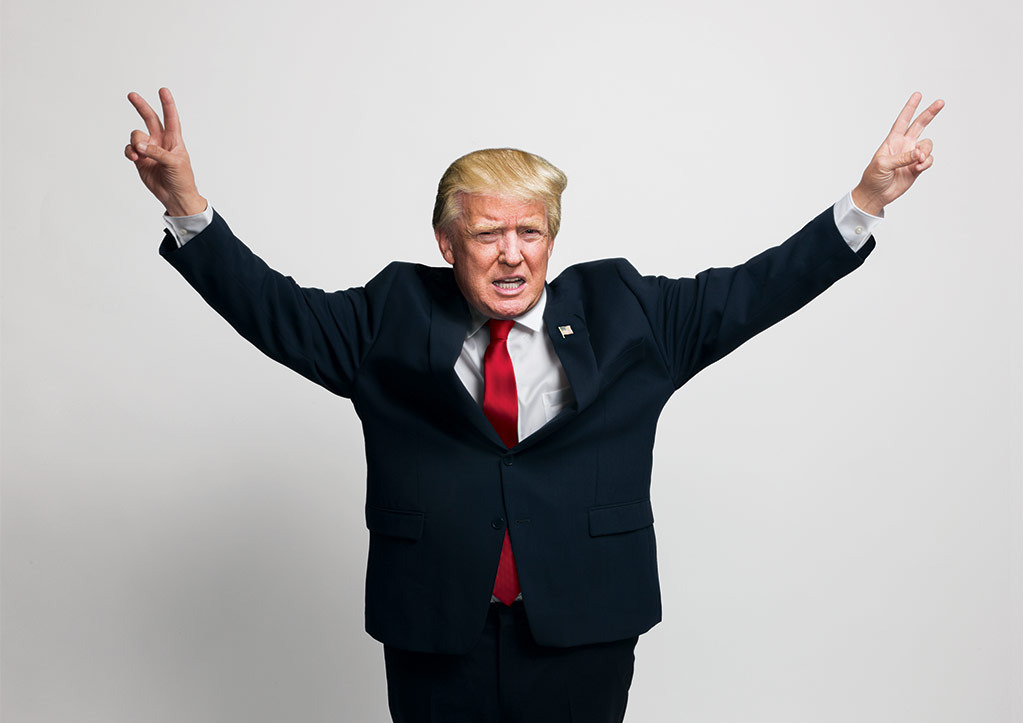 A new CBO report says the Senate bill to repeal the Affordable Care Act “would increase the number of people without health insurance by 22 million by 2026, a figure that is only slightly lower than the 23 million more uninsured that the House version would create,” the New York Times reports.

“Next year, 15 million more people would be uninsured compared with current law… The legislation would decrease federal deficits by a total of $321 billion over a decade.”

Washington Post: “The CBO’s analysis has been awaited as a crucial piece of evidence as McConnell and other Republican leaders try to hurry a vote on the bill this week. But they are navigating an expanding minefield of resistance from their own party’s moderate and conservative wings, while Democrats are united against it.”

“The Supreme Court announced on Monday that it will decide whether President Trump’s revised travel ban was lawful, setting the stage for a major decision on the scope of presidential power,” the New York Times reports.

“Mr. Trump’s revised executive order, issued in March, limited travel from six mostly Muslim countries for 90 days and suspended the nation’s refugee program for 120 days. The time was needed, the order said, to address gaps in the government’s screening and vetting procedures.”

Politico notes the court “will allow parts of the directive to take effect in the meantime.”

Axios: “Unlike in the original travel ban, travelers with valid green cards and visas will be allowed to enter the U.S., but all refugees from the 6 countries listed will be banned.”

The defenses of the Senate's health care plan are pathetically dishonest https://t.co/lloYEq0rqG

One of the nation’s largest healthcare lobbying groups Monday announced its opposition to the Senate’s ObamaCare repeal plan, warning that it could hurt the “most vulnerable citizens,” The Hill reports.

Said the American Medical Association: “Medicine has long operated under the precept of Primum non nocere, or ‘first, do no harm.’ The draft legislation violates that standard on many levels.”

President Trump resumed a Twitter rant about Russia, Barack Obama, and Hillary Clinton, “an apparent continuation of his reaction to a damning Washington Post story from last week that painted Obama as having done too little too late to pinch off the Kremlin’s influence over the 2016 election,” The Week reports.

“Trump — who has been accused of ‘collusion’ and ‘obstruction’ himself — turned the allegations on their head to baselessly accuse his predecessor of colluding with Russia or obstructing justice instead. It is not entirely clear from Trump’s tweets what he means, though.”

Josh Marshall: “What on earth is Trump talking about demanding Obama apologize to him for ‘colluding’ with Russia?  You really don’t have to go any further than this email from a New York real estate player, who’s crossed paths with Trump, and wrote in more than a year ago to explain the predatory attack strategies Donald learned from his dad Fred way back in the day. We now know Trump’s modus operandi intuitively. But it helps to understand where it came from, the logic of it and how it’s succeeded for Trump again and again over decades.”

One way for Dems to prevent McConnell et al from taking insurance away from millions: form a gang to stop it. https://t.co/bon4clzvsb

Playbook: “Republicans have been talking about repealing Obamacare for six years, and this week they are finally poised to take up their legislation. One problem: it’s unclear if they have anywhere near the support they need to get the bill through. Expect a lot of arm twisting and drama over the next several days. President Donald Trump will play a support role.”

“Senate Majority Leader Mitch McConnell’s allies have sent signals that he is going to put the bill up for a vote even if he doesn’t expect it to pass. But Sen. John Cornyn of Texas, the No. 2 Senate Republican, told reporters in Colorado Springs that Aug. 1 is the real final deadline.”

“If it looks like this bill will pass, there’s a chance the House will stick around to try to take action. Senior Republicans we talk to tell us they’d want to try to take advantage of the political momentum. But there’s still serious doubt this bill can pass the House.”

The AP says there is no agreement on the next big item on the GOP agenda: Tax Reform.   “House Republican leaders are firm that they want to completely overhaul the tax system for businesses and individuals. They want to make the tax law simpler and more efficient, and they want the changes to endure beyond the next decade.”

“They want to cut tax rates, but they don’t want the changes to add to the federal government’s long-term debt. That means Congress would have to eliminate a lot of exemptions, deductions and credits, and probably come up with a new source of revenue.”

“The White House is all about tax cuts. Administration officials have talked about simplifying the tax system and getting rid of deductions, but have offered few specifics.”

Frank Rich: “For all the months of sensational revelations and criminal indictments (including of his campaign manager and former attorney general, John Mitchell), a Harris poll found that only 22 percent thought Nixon should leave office. Gallup put the president’s approval rating in the upper 30s, roughly where our current president stands now — lousy, but not apocalyptic. There had yet to be an impeachment resolution filed in Congress by even Nixon’s most partisan adversaries.”

“He had defied his political obituaries before, staging comebacks after a slush-fund scandal nearly cost him his vice-presidential perch on the GOP ticket in 1952 and again after his 1962 defeat in the California governor’s race prompted the angry ‘last press conference’ at which he vowed that ‘you won’t have Nixon to kick around anymore.’ Might Tricky Dick pull off another Houdini? He was capable of it, and, as it happened, it would take another full year of bombshells and firestorms after the televised Senate hearings before a clear majority of Americans (57 percent) finally told pollsters they wanted the president to go home. Only then did he oblige them, in August 1974.”

President Trump accused former President Barack Obama of stealing his terminology when Obama said last week that there was a “fundamental meanness” at the core of the Republican health care bill, CNN reports.  Said Trump: “Well he actually used my term, ‘mean.’ That was my term. Because I want to see — and I speak from the heart — that’s what I want to see, I want to see a bill with heart.”

“One month before Election Day, Jared Kushner’s real estate company finalized a $285 million loan as part of a refinancing package for its property near Times Square in Manhattan,” the Washington Post reports.

“The loan came at a critical moment. Kushner was playing a key role in the presidential campaign of his father-in-law, Donald Trump. The lender, Deutsche Bank, was negotiating to settle a federal mortgage fraud case and charges from New York state regulators that it aided a possible Russian money-laundering scheme. The cases were settled in December and January.”

“Now, Kushner’s association with Deutsche Bank is among a number of financial matters that could come under focus as his business activities are reviewed by special counsel Robert S. Mueller III, who is examining Kushner as part of a broader investigation into possible Russian influence in the election.”

Conservative columnist Hugh Hewitt explains why “Replacing Obamacare is a make-or-break moment for Republicans,” and notes ‘If the GOP defaults on its core promise, it is doomed as a party to minority status, probably as early as 2018 and certainly in 2020…It will forfeit every other Republican goal because failing to deliver on the central promise of eight years of debates and campaigns will shatter the credibility every Republican, not just those who block the bill. The party as a whole will be gravely wounded, perhaps beyond healing for a generation or more.”

Why would Trump forfeit his most precious political asset to support the grossly unpopular GOP agenda? A theory. https://t.co/LcFlWPFozB

“To win again,’ writes Franklin Foer in The Atlantic, “the Democrats don’t need to adopt an alien agenda or back away from policies aimed at racial justice. But their leaders would be well advised to change their rhetorical priorities and more directly address the country’s bastions of gloom. The party has been crushed—not just in the recent presidential election, but in countless down-ballot elections—by its failure to develop a message that can resonate with people beyond the core members of the Obama coalition, and by its unwillingness to blare its hostility to crony capitalism. Polling by the group Priorities USA Action shows that a stunning percentage of the voters who switched their allegiance from Obama to Trump believe that Democratic economic policies favor the rich—42 percent, nearly twice the number who consider that to be true of Trump’s agenda…The makings of a Democratic majority are real. Demographic advantages will continue to accrue to the left. The party needs only to add to its coalition on the margins and in the right patches on the map. Doing that does not require the abandonment of any moral principles…”

E.J. Dionne, Jr. spotlights “The Senate’s three big lies about health care“: They are “Lie One: Democrats and progressives are unwilling to work with Republicans and conservatives on this issue…In fact, Democrats, including President Barack Obama when he was in office, have said repeatedly that they would like to work with Republicans to improve the Affordable Care Act. Senate Democratic leader Charles E. Schumer’s office put out a list of such offers, including a June 15 letter from Schumer to Senate Majority Leader Mitch McConnell calling for a cross-party meeting to “find a way to make health care more affordable and accessible.” Lie Two: This bill is primarily about improving health care for American families. No, this effort is primarily about cutting taxes…Lie Three: The Senate bill is a “compromise.” Really? Between whom? The House wants to destroy Obamacare quickly, the Senate a bit more slowly while also cutting Medicaid more steeply over time. This is only a “compromise” between two very right-wing policies.”

A new Pew Research survey finds that by a margin of nearly two-to-one, 62% to 32%, more Americans now say they favor allowing gays and lesbians to marry than say they are opposed.  “Views on same-sex marriage have shifted dramatically in recent years. As recently as 2010, more Americans opposed (48%) than favored (42%) allowing gays and lesbians to marry legally. In the past year alone, support has increased seven percentage points.”

“The Supreme Court on Monday agreed to hear an appeal from a Colorado baker with religious objections to same-sex marriage who had lost a discrimination case for refusing to create a cake to celebrate such a union,” the New York Times reports.

“The case will be a major test of a clash between laws that bar businesses open to the public from discriminating based on sexual orientation and claims of religious freedom. Around the nation, businesses like bakeries, florists and photography studios have said, so far with little success, that forcing them to serve gay couples violates their constitutional rights.”

President Trump “is eager to meet Russian President Vladimir Putin with full diplomatic bells and whistles when the two are in Germany for a multinational summit next month. But the idea is exposing deep divisions within the administration on the best way to approach Moscow in the midst of an ongoing investigation into Russian meddling in the U.S. elections,” the AP reports.

“Many administration officials believe the U.S. needs to maintain its distance from Russia at such a sensitive time — and interact only with great caution. But Trump and some others within his administration have been pressing for a full bilateral meeting. He’s calling for media access and all the typical protocol associated with such sessions, even as officials within the State Department and National Security Council urge more restraint, according to a current and a former administration official.”