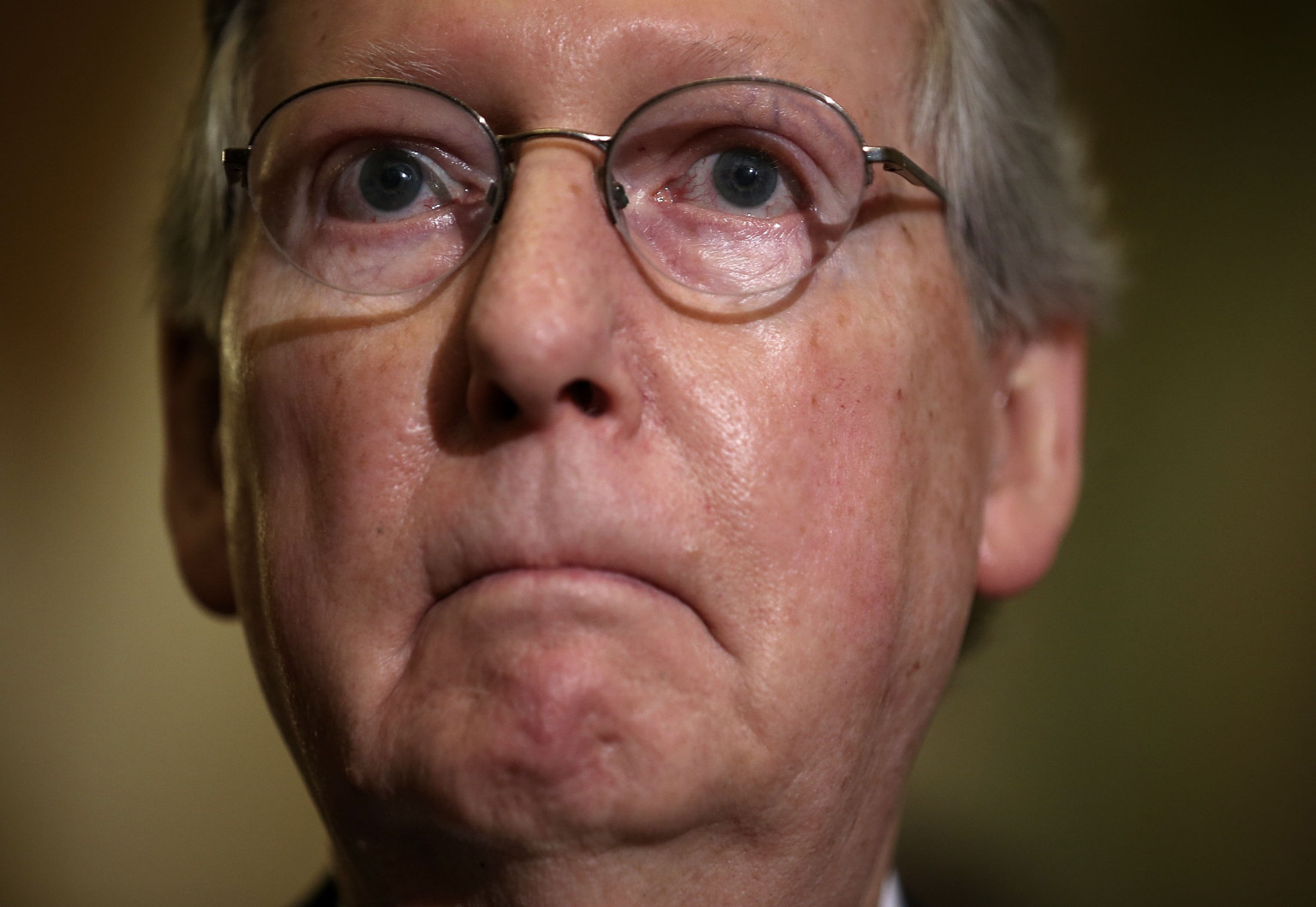 John Cassidy: “After Mitch McConnell, the Senate Majority Leader, released a draft of the Senate health-care bill, on Thursday morning, the media finally began focusing on the essence of what Republicans are proposing: an enormous redistribution of wealth into the pockets of the already-wealthy. The bill would modify the health-insurance subsidies introduced under the Affordable Care Act and dramatically cut Medicaid, all to deliver a big tax cut to the nation’s richest households. But there’s another aspect of the legislation that has received less attention, and that’s the way it staggers its various provisions, and claims billions of dollars in savings that are far from guaranteed.”

“If McConnell’s proposal were signed into law, the tax cuts for families earning more than a quarter of a million dollars a year would take effect immediately—in fact, they would be backdated to the start of the 2017 tax year. But many of the other big provisions in the bill would only take effect down the road.”

President Trump is reportedly weighing whether to pull out of Israeli-Palestinian peace negotiations following a “tense” meeting between Jared Kushner and Palestinian Authority President Mahmoud Abbas, the Jerusalem Post reports.

“Abbas was supposedly furious with the president’s son-in-law after Kushner relayed Israeli demands to the 81-year-old Palestinian leader which included the immediate halt of payments to terrorists and their families.”

Forget death panels. If Republicans pass this bill, they're the death party. https://t.co/jCStfOaBjy

Sen. Bernie Sanders (I-VT) and his wife, Jane Sanders have hired prominent defense attorneys amid an FBI investigation into a loan Jane Sanders obtained to expand Burlington College while she was its president, CBS News confirms.   According to Politico, prosecutors might also be looking into allegations that Sen. Sanders’ office inappropriately urged the bank to approve the loan.

I find it deliciously ironic that, after all the slander her two main opponents threw her way, Hillary Rodham Clinton will be the only one out of the three not in prison.

“Senate Republicans are expected to revise their health bill early next week, adding in a provision that could lock Americans out of the individual market for six months if they fail to maintain continuous insurance coverage,” Vox reports.

“The six-month waiting period would fill a big policy gap in the current Better Care Act, which requires health plans to accept all patients — but doesn’t require all Americans to purchase coverage, as the Affordable Care Act does. Experts expect that this would cause a death spiral, where only the sickest patients purchase coverage and premiums skyrocket.”

“But the six-month waiting period could also complicate the Senate Republicans’ repeal efforts, because it may run afoul of the chamber’s complex reconciliation rules.”

David Leonhardt and Stuart Thompson: “There is simply no precedent for an American president to spend so much time telling untruths. Every president has shaded the truth or told occasional whoppers. No other president — of either party — has behaved as Trump is behaving. He is trying to create an atmosphere in which reality is irrelevant.”

“The list above uses the conservative standard of demonstrably false statements. By that standard, Trump told a public lie on at least 20 of his first 40 days as president. But based on a broader standard — one that includes his many misleading statements (like exaggerating military spending in the Middle East) — Trump achieved something remarkable: He said something untrue, in public, every day for the first 40 days of his presidency. The streak didn’t end until March 1.”

“Since then, he has said something untrue on at least 74 of 113 days. On days without an untrue statement, he is often absent from Twitter, vacationing at Mar-a-Lago in Florida, or busy golfing.”

Bruce Bartlett: “Almost two years ago, I wrote an article for Politico endorsing Donald Trump for president. It was a tongue-in-cheek effort—I ‘supported’ Trump only because I thought he would lose to Hillary Clinton, disastrously, and that his defeat would cleanse the Republican Party of the extremism and nuttiness that drove me out of it. I had hoped that post-2016, what remained of the moderate wing of the GOP would reassert itself as it did after the Goldwater debacle in 1964, and exorcise the crazies.”

“Almost everything that has happened since November 8 has been the inverse of what I’d imagined. Trump didn’t lose; he won. The Republican Party isn’t undergoing some sort of reckoning over what it believes; his branch of the Republican Party has taken control. Most troubling, perhaps, is that rather than reassert themselves, the moderate Republicans have almost all rolled over entirely.”

“Trump has turned out to be far, far worse than I imagined. He has instituted policies so right wing they make Ronald Reagan, for whom I worked, look like a liberal Democrat.”

Washington Post: “McConnell is now scrambling to save a bill that aims to repeal and replace major parts of the Affordable Care Act, also known as Obamacare. He released it Thursday morning after writing it in secret for weeks with a small group of aides. After keeping the White House at a distance during the bill’s crafting, McConnell is suddenly more dependent on Trump — mainly to apply political pressure on skeptical conservatives.”

“The White House’s strategy is to continue to let McConnell take the lead. Trump is involved only as an encourager, as he was with Cruz on the Thursday phone call. He is not offering or cutting deals, those familiar with the situation said.”

Trump duped 600 Carrier workers into thinking he saved their jobs.

Trump got a photo op.
Carrier got a tax break.
Workers get pink slips. pic.twitter.com/DlZtEaHlzA

Montel Williams, the former talk show host and self-styled Reagan conservative:  “For seven years, House Speaker Paul Ryan and congressional Republicans told us they had “a better way.” Many voters took them at their word. We’re finding now, however, that Republicans had no replacement plan, instead cobbling one together last minute. Most likely, congressional Republicans believed they’d never have to actually repeal Obamacare. I’m betting many of them are praying that enough colleagues oppose the bill so that it simply dies, allowing them to blame Democratic obstruction.

At the end of the day, I don’t want another tax cut at the expense of another father not being able to get his daughter the lifesaving care I was able to provide my daughter. No father should have to choose between back-breaking debt and his child’s life. That is the inevitable result of the Senate proposal.  Republicans need to own the fact they’ve created a monster by lying to the base for the last seven years. They need to come clean. The truth is that they don’t really think this is a good bill. They are afraid of their own voters, to whom they gave a bad idea as a battle cry.”

Eugene Robinson on the dollars behind the Republican Senate’s “health care bill.” “Fundamentally, what Republicans in both chambers want to do is cut nearly $1 trillion over the next decade from the Medicaid program, which serves almost 70 million people. Medicaid provides health care not just for the indigent and disabled but also for the working poor — low-wage employees who cannot afford health insurance, even the plans offered through their jobs.

Additionally, about 20 percent of Medicaid spending goes to provide nursing home care, including for middle-class seniors whose savings have been exhausted — a situation almost any of us might confront. Roughly two-thirds of those in nursing homes have their care paid by Medicaid.

Why would Republicans want to slash this vital program so severely? You will hear a lot of self-righteous huffing and puffing about the need for entitlement reform, but the GOP’s intention is not to use the savings to pay down the national debt. Instead, slashing Medicaid spending creates fiscal headroom for what is euphemistically being called “tax reform” — a soon-to-come package of huge tax cuts favoring the wealthy.”

“The Koch network is working with conservative allies behind the scenes to make changes to the Senate health-care bill that was unveiled this week, declining to endorse the measure as it stands,” the Washington Post reports.

“Network officials said they still anticipate spending between $300 million to $400 million on political activity in the 2017-2018 election cycle, a target unveiled earlier this year. They said it will probably be closer to the higher end of that range.”

A woman whose daughter has cancer confronted her senator over the new healthcare bill.

This is heart breaking.😓 pic.twitter.com/OADLueJc6V

Rick Wilson on the GA-06: “Name recognition, tribal smell, and motor learning all matter. Jon Ossoff was a newcomer who failed to define himself before it was done to him. It was harder to transform suburban Republican Handel, a known quality, into the concubine of Donald Trump. She may be more conservative than Democrats liked, but she was an ideological Goldilocks for the district…

The media campaign reached a point where the marginal utility of more spending diminished to zero. The Handel campaign and its GOP allies spent heavily as well, and while the ROI of the Democratic campaign fell short, the high cost of defending a safe seat here is something my party can’t replicate at scale. Regardless of the locked-in-stone “this means X about 2018″ takes and the absurd bonfire of campaign cash both sides spent, this race came down to the usual fundamentals; candidate quality, ideological fit, and campaign mechanics.

They almost always do.”