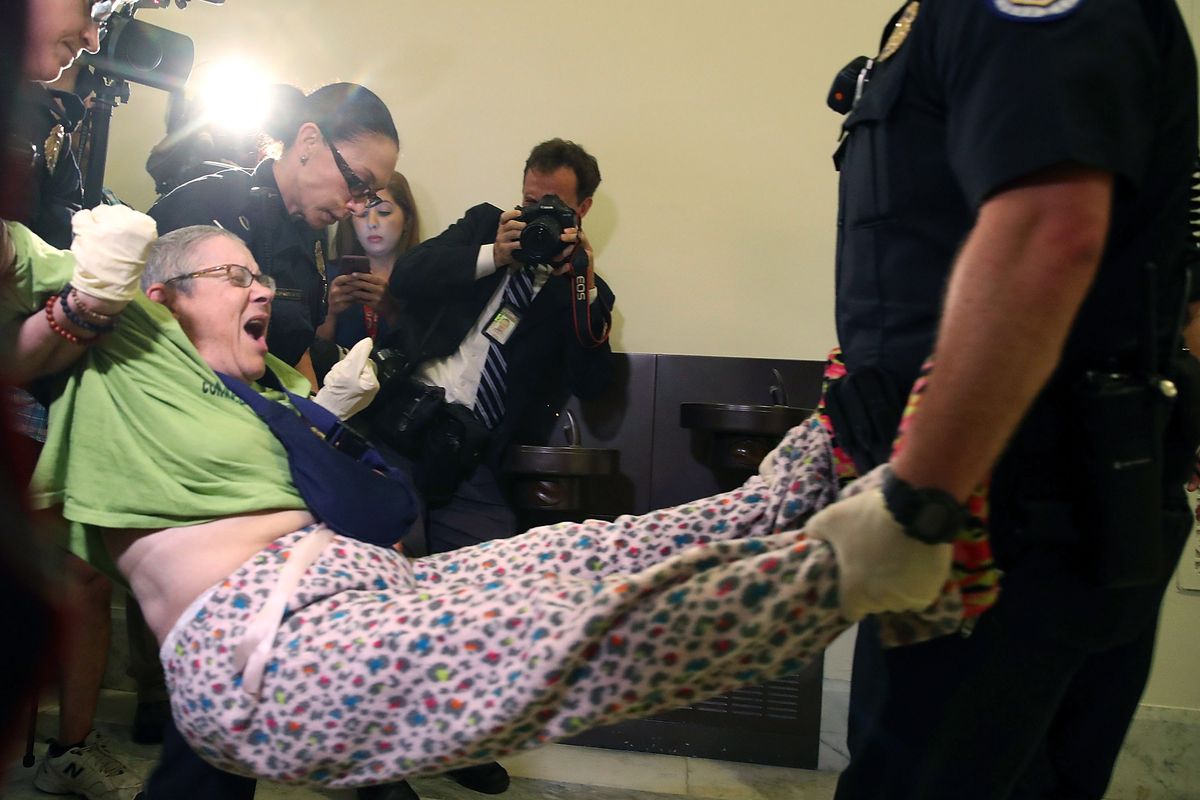 “When it comes to managing Republicans’ best interests, Senator Mitch McConnell of Kentucky, the majority leader, rarely loses. So it is possible that Mr. McConnell views the potential failure of a hastily written health care bill as an eventual boon,” the New York Times reports.

“His presentation on Thursday of the Senate’s health care measure to Republican colleagues — after the White House and key lobbyists got a peek the night before — was met with something other than unbridled enthusiasm. According to lawmakers who were at the unveiling, members from the left and right ends of the party’s spectrum were deeply critical of the effort.”

“As Democrats immediately took to the Senate floor to excoriate the bill and the secretive process in which it was put together, few Republicans, even those involved in crafting it, came to defend it.”

Caitlin Owens: “Only hours after the release of the Senate health care bill, four conservative senators put out a statement saying they can’t support the bill in its current form. As of now, moderates have held their fire, saying they need to finish reading and analyzing the bill.”

If you're a Democrat spending today fighting Pelosi instead of Trumpcare, you're worse than useless.

“If Pelosi is gone Repubs won’t have any Dems to hate & we’ll win elections” is something believed by people who are really stupid.

A new NBC News/Wall Street Journal poll finds Democrats lead the generic congressional ballot by eight points, 50% to 42%.  It’s the largest lead any party has held on that generic ballot question since 2013.

This is the seminal image of our battle. She’s being arrested for protesting ACA repeal outside McConnell’s office. https://t.co/MCmZQSkt1I pic.twitter.com/50bkiUcmAo

Former President Barack Obama took to his Facebook page after the release of the Senate version of Trumpcare to call everyone to action on the bill.

He wrote, “The Senate bill, unveiled today, is not a health care bill. It’s a massive transfer of wealth from middle-class and poor families to the richest people in America. It hands enormous tax cuts to the rich and to the drug and insurance industries, paid for by cutting health care for everybody else. Those with private insurance will experience higher premiums and higher deductibles, with lower tax credits to help working families cover the costs, even as their plans might no longer cover pregnancy, mental health care, or expensive prescriptions. Discrimination based on pre-existing conditions could become the norm again. Millions of families will lose coverage entirely.”

“Simply put, if there’s a chance you might get sick, get old, or start a family – this bill will do you harm. And small tweaks over the course of the next couple weeks, under the guise of making these bills easier to stomach, cannot change the fundamental meanness at the core of this legislation.”

The former President called upon people to call their Senators, visit their offices, and speak out against this terrible bill.

A picture is worth a 1000 soulless words… #AHCA pic.twitter.com/TjK04aboPE

Conservatives in the Senate doesn’t like McConnell’s bill.  “Four Republican senators from the conservative wing of their party say they oppose the Senate health-care bill as it was introduced by Senate Majority Leader Mitch McConnell on Thursday, which places the effort to overhaul the American health-care system in jeopardy as it heads for an anticipated vote in the Senate next week.  Those senators — Rand Paul of Kentucky, Ted Cruz of Texas, Ron Johnson of Wisconsin and Mike Lee of Utah — announced in a joint statement that while they cannot support the bill as it is currently written, they are open to negotiating changes that could ultimately win their support.”

“Moderate” Republicans are concerned.   For example, Susan Collins.  “She took issue with how the Senate bill, starting in 2025, used a rate of growth for federal funding for Medicaid that is significantly slower than the typical increases of costs for the program… She added that she was concerned about how the cuts would negatively affect rural hospitals or prompt states to restrict Medicaid eligibility.  Collins also was critical of the Senate bill’s provision to defund Planned Parenthood, but previously she has hinted she could be OK with the legislation if she is allowed to vote on amendment to strip to defund measure.”

Rob Portman is also “concerned.” “I continue to have real concerns about the Medicaid policies in this bill, especially those that impact drug treatment at a time when Ohio is facing an opioid epidemic.”

Some Republican governors are “concerned.” “Former presidential candidate and Ohio Governor John Kasich said he has “deep concerns” about the new health care legislation that Senate Republicans made public Thursday, joining other GOP governors who aren’t thrilled about the Obamacare repeal bill.

This is the part that repeals essential health benefits which include mental health, hospitalization, and maternity. pic.twitter.com/2rOhoAQwre

Mike Allen: “President Trump’s firing of FBI Director James Comey is rightly seen as a terrific legal blunder: He undercut an investigation that might have shown he never colluded with the Russians, and spawned one that could result in obstruction of justice charges.”

“Regardless of the legal outcome, it’ll go down as one of the dumbest political mistakes in the modern era. One of the president’s outside advisers calls it the gravest political mistake since Richard Nixon decided not to apologize to the American people for Watergate, and instead proceeded with the cover-up.”

Remarkable clip from tonight where Trump explains why only rich people should be in charge of economic policy.

“The White House is quietly lobbying House Republicans to weaken a bill overwhelmingly passed by the Senate last week that would slap tough new sanctions on Russia for its meddling in the 2016 election and allow Congress to block any future move by President Trump to lift any penalties against Moscow,” the New York Times reports.

“The effort is designed to head off an awkward and politically damaging veto fight between the Trump administration and the Republican-controlled Congress on Russia at a time when Mr. Trump is laboring under the shadow of multiple investigations about his campaign’s potential collusion with Moscow.”

President Trump “called for a new law barring immigrants from receiving welfare for at least five years at a rally on Wednesday. But neither Trump nor nearly 6,000 of his die-hard supporters seemed to realize that the law has already existed for more than 20 years,” USA Today reports.

“Trump received a standing ovation and pledged his administration would put the legislation into effect ‘very shortly.’”

Jack Shafer: “Trump doesn’t really want to be president. If he did, he’d nominate candidates to the 404 important but vacant administration jobs and get on with the job of governance. He doesn’t seem to want to be commander in chief of the armed forces, either, having outsourced Afghanistan troop-level decisions to Secretary of Defense James Mattis. Don’t burden him with foreign policy—which so daunts him that he’s postponed an official trip to Britain because (as some report) he fears the inevitable protests that will greet him. Nor is he much interested in upholding the oath he took on Inauguration Day, promising to ‘preserve, protect and defend the Constitution of the United States.’ He proves this lack of interest every day by ignoring the Constitution’s foreign emoluments clause.”

“Instead, Trump lusts for the job of White House communications director, a position that has been open since mid-May, when Michael Dubke resigned. By not replacing Dubke, Trump has telegraphed his preference to be his own communicator-in-chief and amplified that preference by constantly second-guessing Sean Spicer, his hapless press secretary.”

One of President Trump’s newest appointees is a registered agent of Saudi Arabia earning hundreds of thousands of dollars to lobby on the kingdom’s behalf, according to the Center for Public Integrity.

Since January, the Saudi Arabian foreign ministry has paid longtime Republican lobbyist Richard Hohlt about $430,000 in exchange for “advice on legislative and public affairs strategies.”

“The hacking of state and local election databases in 2016 was more extensive than previously reported, including at least one successful attempt to alter voter information, and the theft of thousands of voter records that contain private information like partial Social Security numbers,” Time reports.

“In one case, investigators found there had been a manipulation of voter data in a county database but the alterations were discovered and rectified.”

New York Times: “The repeal bill approved last month by the House would bar the use of federal tax credits to help purchase insurance plans that include coverage of abortion. But senators said that provision might have to be jettisoned from their version because of complicated Senate rules that Republicans are using to expedite passage of the bill and avoid a filibuster. If that provision is dropped, a bill that has already elicited deep misgivings among moderate Republicans — and stiff resistance from Democrats, health care providers and patient advocacy groups — could also generate concern among abortion opponents, as well as conservative lawmakers.”

First Read: “In other words, Senate Republicans are signaling they can’t include abortion provisions, because they would need 60 votes — not the 51 needed under reconciliation. Would conservative Senate and House Republicans walk away if the coverage of abortion was allowed under the legislation? Remember, abortion proved to be a tricky matter for Democrats during their health-care push in 2009-2010. Could the same thing happen on the GOP side?”

Rick Klein: “It’s a discussion draft that will leave much to discuss, and it’s unlikely to get prettier from here. The history of health care bills in Congress provides a clear lesson: process matters. On that count, the Senate’s health care effort is off to a distinctly unhealthy start, with members of the GOP’s conservative and moderate wings sounding similar only in their skepticism around a bill that’s been kept from even most of them until today. The secrecy has built anticipation and trepidation around the details, and now people will be able to judge the impact on their lives. Medicaid cuts, pre-existing conditions, abortion and Planned Parenthood; there’s enough cobbled together to convince senators that they’ll want to hear from constituents, or at least stakeholder groups, before taking votes that leadership insists need to happen before the Fourth of July.”

“‘I’ve been talking about a plan with heart,’ President Trump said Wednesday night in Iowa, in another implicit dig at the House bill he once celebrated, adding that he told senators to ‘add some money to it.’ Nobody is against ‘heart.’ But the details are not even an easy sell at campaign-style rallies, much less congressional hearings and voter gatherings, with an effort that starts out as unpopular as this does.”

Last night in Iowa, @POTUS claimed we are "one of the highest taxed nations in the world." He's wrong -> https://t.co/1d12H6WKOr pic.twitter.com/Ul0nuY0Mb2

“Two of the nation’s top intelligence officials told Special Counsel Robert Mueller’s team and Senate investigators, in separate meetings last week, that President Trump suggested they say publicly there was no collusion between his campaign and the Russians,” CNN reports.

“Director of National Intelligence Dan Coats and National Security Agency Director Adm. Mike Rogers described their interactions with the President about the Russia investigation as odd and uncomfortable, but said they did not believe the President gave them orders to interfere, according to multiple sources familiar with their accounts.”