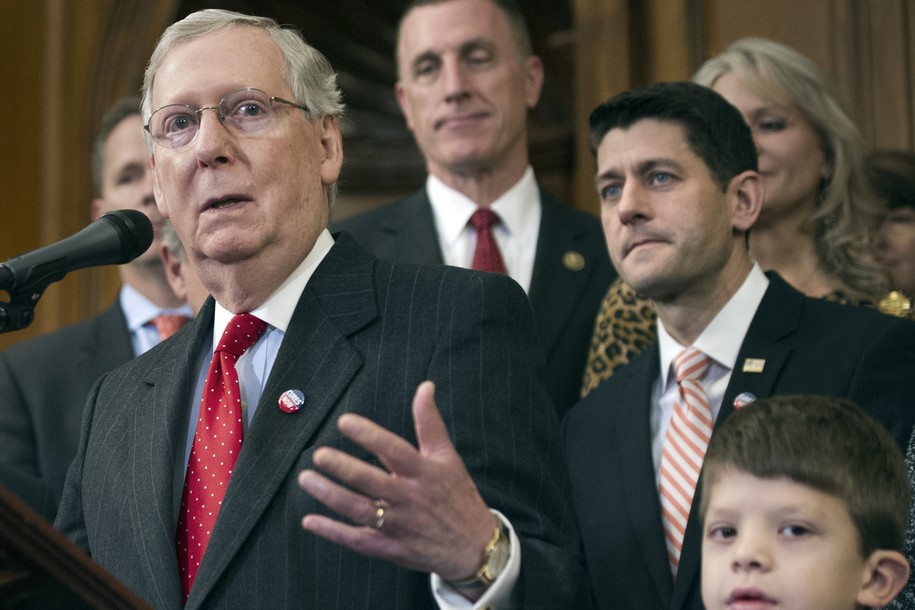 A draft of the Senate Healthcare Elimination Bill has leaked, as Senate leaders “were putting the final touches on legislation that would reshape a big piece of the U.S. health-care system by dramatically rolling back Medicaid while easing the impact on Americans who stand to lose coverage under a new bill,” the Washington Post reports.

“The bill largely mirrors the House measure that narrowly passed last month but with some significant changes. While the House legislation pegged federal insurance subsidies to age, the Senate bill would link them to income as the ACA does. The Senate proposal cuts off Medicaid expansion more gradually than the House bill, but would enact deeper long-term cuts to the health-care program for low-income Americans. It also removes language restricting federally-subsidized health plans from covering abortions, which may have run afoul of complex budget rules.”

Jonathan Chait: “The most important design feature is that the Senate bill retains all the tax cuts in the House bill. The tax cuts are what drive the bill’s inescapable cruelty. By eliminating nearly a trillion dollars in revenue, it necessarily creates a trillion dollars in cuts for coverage subsidies. The House bill reduces the insurance rolls by 23 million. The Senate bill won’t fare a whole lot better.

Senators have widely disparaged the House bill, and Senate moderates have talked a good game about protecting the sick and vulnerable. President Trump even admitted privately the House bill was “mean.” But the bill they’re voting on does pretty much the same thing. Now they have to decide if they want to make insurance unaffordable to millions of Americans too poor or sick to buy their own plans.”

If it were possible, Trumpcare is becoming even more unpopular. From Politico:  “Opposition to the Republican health bill is growing, according to a new POLITICO/Morning Consult poll.  [O]nly 35 percent of voters surveyed approve of the bill passed by the House last month. Nearly half of voters, 49 percent, disapprove of the bill. [P]olling indicates the bill has become less popular since the House advanced it in early May.”

A new Reuters/Ipsos poll finds that a majority of the country thinks the GOP health care bill “would be harmful for low-income Americans, people with pre-existing health conditions and Medicaid recipients.”  “Nearly 60% of adults said they thought it would make insurance more expensive for low-income Americans and people with pre-existing conditions. Fifty-seven percent said it would make Medicaid less available, and 69% said it would cut federal money for Planned Parenthood.”  Overall, 41% of American adults oppose the House plan, while 30% support it. Another 29% said they “don’t know.”

A new CBS News poll finds President Trump’s approval rating is a dismal 36% to 57%. Key finding: “The drop in the President’s approval rating is partially due to ebbing support among Republicans. Seventy-two percent approve of the job Mr. Trump is doing, a decline of eleven points since April.”

A new AP-NORC poll finds that less than a third of Americans support President Trump’s decision to withdraw from the Paris climate accord, with just 18% of respondents agreeing with his claim that pulling out of the international agreement to reduce carbon emissions will help the U.S. economy.

Dems do have a message.  This.  More of this.  All the time this.  Find candidates like this.

“Heller is widely considered the most vulnerable Republican up for re-election in 2018 and is the only GOP senator this cycle who represents a state won by Hillary Clinton in 2016. A Public Policy Polling survey released Monday had Heller receiving just 39% of the vote if the match-up were held today against a generic Democrat, who earned 46% of support among Nevada voters.”

First Read: “Republicans are preparing for a marathon of votes on their Obamacare repeal starting next week. There’s no written bill yet, and there isn’t even an agreement that has leadership comfortable they have 50 votes to pass a bill. But the new expectation on Capitol Hill is there will be an outline of a proposal as soon as Wednesday. Why? Senate Majority Leader Mitch McConnell knows that if the Senate doesn’t deal with health care, there’s little chance of any other GOP priority ever seeing the light of day.”

“It’s an incredibly tough issue that’s been a bad political storyline for both Congress and the White House, and he’s essentially betting that when faced with voting yes or no on Obamacare repeal, he’ll have the votes he needs. And if those votes aren’t there — well — they’ll at least have moved on to other things. Keep in mind there’s pressure to lift the debt ceiling in July and then there will be a government funding crisis in September. (And they’re gone in August.)”

This might be the worst Democratic freak-out ever https://t.co/1EhYSc6ywy pic.twitter.com/5pYlRAfMg0

“A veteran federal prosecutor recruited onto special counsel Robert Mueller’s team is known for a skill that may come in handy in the investigation of potential ties between Russia and President Trump’s 2016 campaign team: persuading witnesses to turn on friends, colleagues and superiors,” Reuters reports.

Jonathan Swan: “Trumpworld has been worried about Weissmann since they first got wind that Mueller added him to his team. I started getting phone calls from Trump associates about two weeks ago suggesting I look into his background.”

The fate of the secret health bill turns on Republicans getting away with gross contempt for history and truth. https://t.co/AwiJFOdxLZ

David Leonhardt: “If liberals voted at the same rate as conservatives, Hillary Clinton would be president. Even with Donald Trump’s working-class appeal, Clinton could have swept Michigan, Wisconsin and Pennsylvania.”

“If liberals voted at the same rate as conservatives, Democrats would control the Senate. Clinton or Barack Obama could then have filled the recent Supreme Court vacancy, and that justice would hold the tiebreaking vote on campaign finance, labor unions and other issues.”

“If liberals voted at the same rate as conservatives, the country would be doing more to address the two defining issues of our time — climate change and stagnant middle-class living standards. Instead, Trump is making both worse.”

“President Trump’s pick to be the next FBI director, Christopher Wray, billed New Jersey taxpayers more than $2.1 million in legal charges and expenses while representing Gov. Chris Christie as his personal attorney before during and after the Bridgegate trial,” WNYC reports.

“It is unclear what Wray and an extensive team from his firm, King & Spalding LLP, was doing for Christie — the bills provided to WNYC from the state Attorney General’s Office are heavily redacted, and Wray has never spoken publicly about his role.”

“The public did not even know that Wray was working for the governor until nearly two years into his work, when Christie’s spokesman said a cell phone that the governor used during Bridgegate was in Wray’s possession. Two former Christie aides who were indicted and ultimately convicted had unsuccessfully sought to subpoena the phone to use as part of their defense.”

Here is my extended, more considered, take on what happened in GA-06: https://t.co/3SGPsAf6rL

James Hohmann: “Democrats pinned their hopes on a 30-year-old who had never run for office before and didn’t even live in the district. Ossoff became more dynamic on the stump as the race dragged on, but his lack of a record made it easy to caricature him. He was a vessel through which Democrats channeled their hopes, but he lacked charisma.”

“Handel, 55, has been a fixture of local politics for 15 years. She chaired the Fulton County Board of Commissioners, served as Georgia secretary of state and narrowly lost GOP primaries to become governor in 2010 and then senator in 2014. She had the baggage that comes with being a career politician, but her deep roots and relationships certainly helped far more than they hurt. She was a known commodity who came into the race with high name identification.”

Why a conservative health care wonk thinks the AHCA is indefensible https://t.co/jzqYLgPINa

First Read: “While national Republicans threw the kitchen sink at Ossoff, perhaps their most potent — and consistent — attack was linking him to House Minority Leader Nancy Pelosi. Democrats have to admit they have a Pelosi problem, especially in red states and districts. Yes, she brings money and legislative savvy to the party. But if Democratic candidates like Ossoff are going to campaign on change, Republicans can quickly undercut that message by simply showing Pelosi. It’s a legitimate question Democrats must ask themselves: Can they win back the House with Pelosi promising to stay in power?”

James Hohmann: “Republican operatives say that 98 percent of voters in the 6th District already had an impression of Pelosi when they conducted their first internal poll, and she was 35 points underwater. When presented with the choice of whether they wanted a representative who would work with Paul Ryan or Pelosi, six in 10 picked the Speaker and three in 10 picked the minority leader.”

David Wasserman: “Although it’s true Democrats have agonizingly yet to capture a red district, they have outperformed their ‘generic’ share of the vote significantly in every contest. Measured against the Cook Political Report‘s Partisan Voter Index (PVI), Democrats have outperformed the partisan lean of their districts by an average of eight points in the past five elections.”

“If Democrats were to outperform their ‘generic’ share by eight points across the board in November 2018, they would pick up 80 seats. Of course, that won’t happen because Republican incumbents will be tougher to dislodge than special election nominees. But these results fit a pattern that should still worry GOP incumbents everywhere, regardless of Trump’s national approval rating and the outcome of the healthcare debate in Congress.”

Nate Cohn: “If Democrats keep running ahead of expectations across those plausibly competitive Republican-held seats, many seats will ultimately fall their way. But they will certainly lose more than they win. The question is whether they win enough, and no special election offers the answer to that.”

The four special together show the limits of the Panera strategy, but also a broad winnable field for Democrats https://t.co/txBJV09WVJ