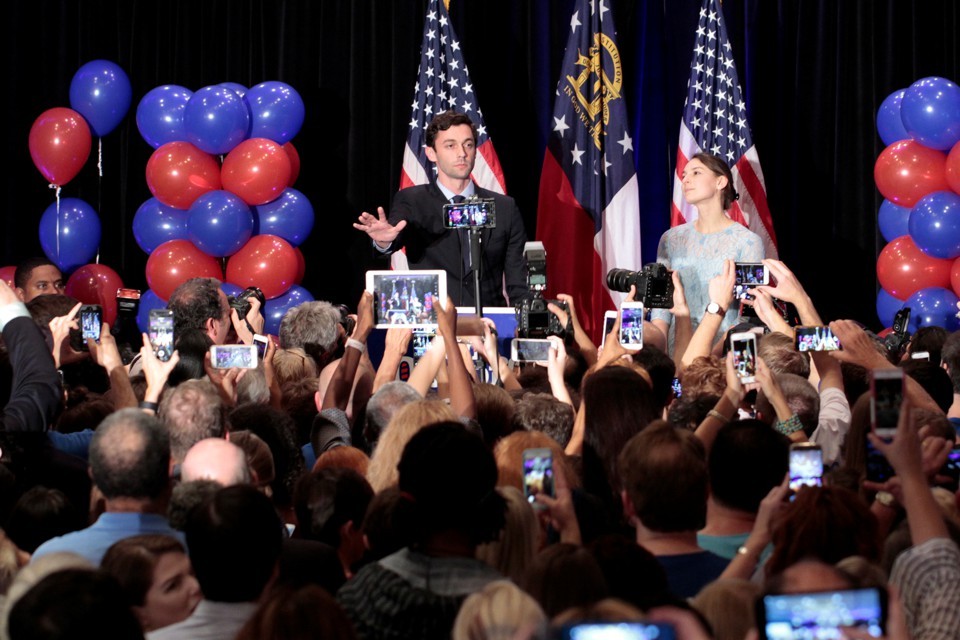 So, yeah, last night sucked.  Sure, there are ways to spin it as good news and a moral victory.  But I think we are all tired of good trends and moral victories.   We want a real victory and we didn’t get it.   So what do we do now?  Do we devolve into civil warfare between ourselves?   Or do we learn from it and move on to fight another day?

Conservatives are very good at doing that.  We liberals, not so much.  Indeed, in the best of conditions, liberals, in general, cannot be trusted enough to get to the polls.  And when you through Purist Progressives and Sarandon/Stein leftists into the mix, you have a coalition that, while a majority, can never agree to anything, and thus lets the conservatives frame and win the debate.

Well, enough wallowing and ignoring my own advice.  The good news is that we have a fight to immediately throw ourselves into: Stopping Trumpcare.

Politico: “Senate Republicans are planning a pivotal meeting for Thursday morning to start the whipping process for Obamacare repeal, according to two sources familiar with the process. Mitch McConnell’s current whip count to repeal Obamacare is far short of 50 votes. There is still no bill, and even Republicans are moaning about the rush and lack of transparency.”

“The GOP plan to jam through a bill over the next 10 days amounts to a rare political risk by McConnell with no guarantee of success — and one that could jeopardize his Senate majority long-term if the bill ends up being viewed as poorly as the House-passed bill, which has a 17 percent approval rating. McConnell himself wouldn’t guarantee passage on Tuesday, or even commit to a vote next week, though that is his plan.”

In the wake of Jon Ossoff’s loss, maybe it’s time for Democrats to develop a substantive agenda? https://t.co/7GSHUjKDp2

“As the GOP-led Senate prepares to take up the measure, only 35 percent of voters surveyed approve of the bill passed by the House last month. Nearly half of voters, 49 percent, disapprove of the bill. The other 16 percent don’t know or don’t have an opinion, the poll shows.”

David Atkins on the lesson of last night’s close losses in Georgia and South Carolina: stop chasing rich Romney voters.  They’re Republicans, and they always come home to the party.

“The lesson of the special elections around the country is clear: Democratic House candidates can dramatically outperform Clinton in deep red rural areas by running ideological, populist campaigns rooted in progressive areas. Poorer working class voters who pulled the lever for Trump can be swayed back to the left in surprisingly large numbers—perhaps not enough to win in places like Kansas, Montana and South Carolina, but certainly in other more welcoming climes. Nor is there a need to subvert Democratic principles of social justice in order to accomplish this: none of the Democrats who overperformed Clinton’s numbers in these districts curried favor with bigots in order to accomplish it.

But candidates like Clinton and Ossoff who try to run inoffensive and anti-ideological campaigns in an attempt to win over supposedly sensible, wealthier, bourgeois suburban David-Brooks-reading Republican Romney voters will find that they lose by surprisingly wide margins. There is no Democrat so seemingly non-partisan that Romney Republicans will be tempted to cross the aisle in enough numbers to make a difference.

The way forward for Democrats lies to the left, and with the working classes. It lies with a firm ideological commitment to progressive values, and in winning back the Obama voters Democrats lost to Trump in 2016 without giving ground on commitments to social justice. It does not lie in the wealthy suburbs that voted for Romney over Obama in 2012, or in ideological self-effacement on core economic concerns.”

I don’t always agree with David Atkins, as I find him at times too Berniesque and purist in his criticism of Democrats, but he is right here.

Trump could get us into a war in Syria by accident: https://t.co/MVdnK0PCBN pic.twitter.com/sddCW0KLIj

Josh Marshall echos me above.  I swear I didn’t read him until after I wrote my piece: “This is a big disappointment. But remember, by any objective measure these races show a Democratic party resurgent and a GOP on the ropes. These seats came open because they were vacated by people Trump picked for cabinet appointments. They got those picks because they came from safe seats. They are by no means a cross section of House seats. The thing to do is learn what we can from coming up just short and move on to the next fight. No one should expect any of this to be easy. If you do, bow out of civic questions and just watch movies and TV. We need people with more endurance.

Bruce Reed and Rahm Emanuel: “The stakes are too high to rely entirely on one side’s enthusiasm or the other side’s disenchantment. If their overriding objective in 2018 is to save the country, not realign the Democratic Party, Democrats need to look back to the last time they won back the House in 2006. We helped coordinate that effort, and the lessons we learned then still apply today. Waves don’t happen on their own: Democrats need a strategy, an argument, and a plan for what they’ll do if they win.”

“In the last 60 years, control of the U.S. House of Representatives has changed hands just three times, always in midterm elections, with control shifting away from the president’s party. The 1994 and 2010 campaigns were dominated by attacks against the incumbent president and his party over health care; 2006 became a referendum over the ruling party’s incompetence and corruption. In percentage terms, the worst midterm defeat in the past century came in 1974, when a nation weary of obstruction of justice sent a quarter of the House Republican caucus packing. Some presidents are unfortunate enough to face one of these circumstances; with the midterms still more than a year away, Donald Trump already seems to have all those bases covered.”

The lesson from GA6, by @daveweigel: All politics is now tribal https://t.co/ixMtIuK1ml

New York Times: “The biggest shift Mr. Trump is discussing is a dramatic change to the briefing room schedule, including limiting briefings that he has described as a ‘spectacle’ to once a week and asking reporters to submit written questions. Some of Mr. Trump’s outside advisers, including the Fox News host Sean Hannity, have urged him to curtail the freewheeling — and often embarrassing — barrage of questions. Mr. Trump has been particularly irked by CNN, and other allies such as former House Speaker Newt Gingrich have suggested banning the cable network.”

“Several Trump aides, including Jared Kushner, Mr. Spicer, Stephen K. Bannon and the chief of staff, Reince Priebus, have made their own phone calls searching for potential job candidates, sometimes not telling others in the building what they’re doing. Some believe that the communications director needs his or her own lane; others believe that the person should report to Mr. Spicer, for whom a new role as a deputy chief of staff has been discussed.”

“At the F.B.I., the C.I.A., the Justice Department and the Office of the Director of National Intelligence — agencies responsible for keeping American secrets safe from foreign spies — career officials agreed that Mr. Flynn represented an urgent problem.”

“Yet nearly every day for three weeks, the new C.I.A. director, Mike Pompeo, sat in the Oval Office and briefed President Trump on the nation’s most sensitive intelligence — with Mr. Flynn listening.”

Here are my guesses pic.twitter.com/SsJWPbdsly

I actually think the 2018 takeaway for Democrats from the special elections so far is pretty clear: compete in a lot of places…

JP Green on what Ossoff won (not a seat in Congress… wait… too soon?): “He forced the GOP into record-level spending in a solid red district. More importantly, as Kilgore writes, “Democrats searching for a silver lining in the Georgia race don’t have to look too far. This is the third consecutive special election (the fourth if you count South Carolina) in a historically Republican district where the Democratic percentage of the vote jumped sharply. Democrats will surely retake the House if the swing in their direction is similarly strong in 2018.”

Looking toward the future, the lessons of the GA-6 election may soon be buried in the rubble of coming political earthquakes. As Cassidy concludes, “If the White House and the Republicans go ahead and pass unpopular measures, such as tax cuts for the rich and a health-care bill that raises premiums and causes tens of millions of people to lose their insurance coverage, they could well suffer the consequences in 2018.”

So often the seeds of future victories are hidden in electoral defeats. Just as Handel has learned the useful lessons of her past political defeats, Georgia Democrats can hope that Ossoff will be back in politics again. Having learned the lessons of his defeat in the special election run-off, he now has greater name-recognition and fund-raising smarts — both of which could serve him well in the next election.”

Politico: “Senate Republicans are planning for a July vote to raise the debt ceiling, according to senators and aides. Though the Treasury Department has said that Congress can likely wait until September to avoid default, Senate Majority Leader Mitch McConnell and his lieutenants are increasingly disposed to clearing the Senate’s plate as much as possible before heading home for August recess. That would also likely mean decoupling the debt ceiling from a potential government shutdown fight in September.”

“It’s not clear what exactly such a bill would look like, but members of both parties are interested in a broad spending deal that would avoid the blunt budget cuts of sequestration. A clean debt ceiling increase may be a problem for a GOP majority filled with fiscal conservatives.”

Brian Stelter: “Inch by inch by inch, the Trump administration is rolling back press access, which means less information for the public. And lack of accessibility is only half the problem. Lack of accuracy in official statements is a big issue too.”

“The president’s anti-media defenders may support the administration’s approach, but it’s hard to justify the rollback in accountability. It’s not just the White House, either: the State Department and the Pentagon have all but stopped holding on-camera briefings, too.”

“This isn’t exclusive to the executive branch. There are heightened concerns about legislative branch secrecy as well.”