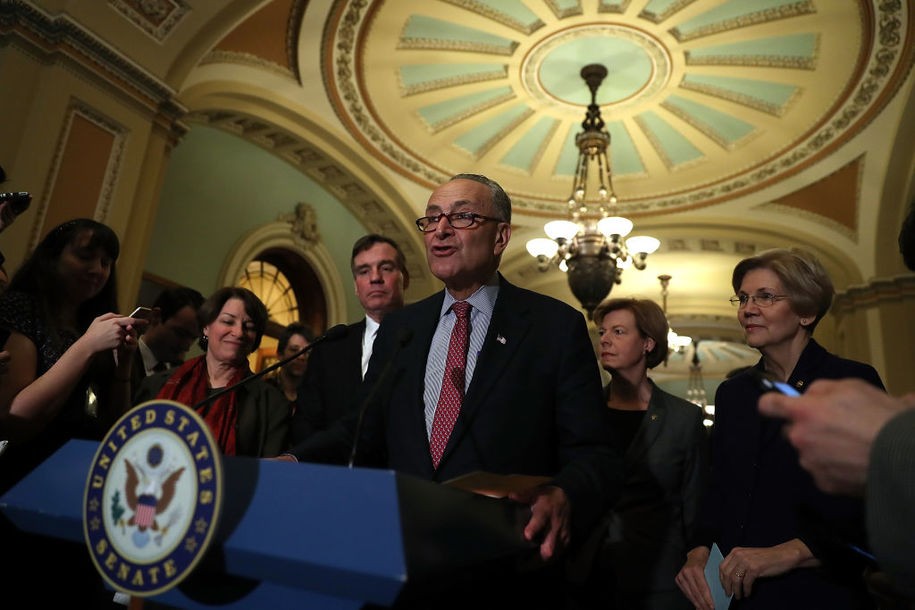 “Democrats will grind Senate business to a halt in a protest against Republican efforts to repeal Obamacare,” Politico reports. “Beginning Monday night, Democrats will start objecting to all unanimous consent requests in the Senate, according to a Democratic aide. They plan to control the floor of the chamber Monday night and try to force the House-passed health care bill to committee in a bid to further delay it.”

“Without the votes to block Obamacare repeal, Democrats are turning to procedural moves they believe will underscore their most powerful argument: Republicans are hiding their repeal plan from the public and using Senate procedures to keep it a secret.”

CNN: “More than 140,000 voters had cast their ballots by the time early voting in Georgia closed Friday — another indication of sky-high turnout in the closely watched runoff for a House seat between Democrat Jon Ossoff and Republican Karen Handel.”

Politico: “While television advertising still dominated most candidates’ campaign budgets, Ossoff is pouring millions into an unprecedented ground game to turn out new voters and those who haven’t voted in non-presidential elections previously.”

“That scrambles the calculus for pollsters, who usually rely on past performance to determine whom they call and who comprises their surveys. In a typical special election, pollsters can rely on data from past midterm and off-year races to establish a likely electorate.”

Politico: “Democrats are closer than they ever could have imagined to winning a House seat in the Republican suburbs of Atlanta, and dealing a resounding blow to Donald Trump. But they’re also gripped by anxiety about what happens if they fall short Tuesday. A loss in Georgia’s special election here could leave the party demoralized, with little to show for all the furious organizing, fundraising and spending in a handful of congressional special elections in the early months of the Trump administration.”

“As a result, Democrats are now straining to throw everything they have at Georgia’s Sixth Congressional District to push Jon Ossoff over the top against Republican Karen Handel, aiming to prove they can win the suburban districts that may pave the way to a House majority in 2018.”

Jonathan Swan: “Sources close to Mitch McConnell tell me the Majority Leader is dead serious about forcing a Senate vote on the Obamacare repeal-and-replace bill before the July 4 holiday.”

“Some senators want to delay the vote but McConnell views that as delaying the inevitable. There are no mysteries about what the toughest disagreements are over — Medicaid funding and insurance market regulations.”

“This week is crucial: the Senate won’t vote without a CBO score, which means they need to finalize negotiations this week.”

“An organization that opposes the Republican effort to repeal and replace key parts of the Affordable Care Act is pressuring five GOP senators not to vote for the emerging legislation in a new $1.5 million ad campaign that begins Monday,” the Washington Post reports.

Politico says Trump hates the job of President, but doesn’t want to quit.  “Trump, too, is cognizant of the comparison to Nixon, according to one adviser. The president, who friends said does not enjoy living in Washington and is strained by the demanding hours of the job, is motivated to carry on because he “doesn’t want to go down in history as a guy who tried and failed,” said the adviser. “He doesn’t want to be the second president in history to resign.”

Nixon didn’t want to be seen as quitter either.   In the end he was forced to.

"I can never go back" "We're activists now; that's who we are" The political awakening of suburban white women in GA https://t.co/5r54cMH9Wi

This is a must read.  All of it.  A taste: “Woman after woman shared this sentiment. “I never even put a sign in my yard because I wasn’t sure how it would be received if it wasn’t a Republican sign,” said Cherish Burnham, 43, of her life as a Democrat, growing up in the red sixth district. On the morning of November 9, she said, consumed by hopelessness, she went to volunteer at her triplet sons’ elementary-school science class, where she saw two other mothers who also looked stricken. After tentative inquiries, the trio realized they were all upset about the same thing; they stood outside the school in conversation for an hour; they told her about LMRC. The expression of primal, agonizing anger that followed Trump’s election meant that for the first time, some women — even those who’d been living in proximity to each other for years— could hear each other for the first time.”

Jonathan Rauch: “Nixon’s second-term approval started strong, in the high sixties, but plummeted as Watergate revelations emerged. By the time the Senate Watergate hearings began, in May of 1973, his ratings were under 50 percent. By the time of the Saturday Night Massacre, in October of 1973, his approval was mired in the mid-twenties, never to recover.”

“Still, Nixon held onto office for more than 17 months after his ratings sank below 50 percent, and for more than nine months after they sank into the twenties. Being loathed by the American public, and being widely and correctly perceived to be a criminal, did not do him in for a long time.”

“The reason was that the critical variable was not overall approval but Republican approval. Removal either by impeachment or under the 25th Amendment, the two mechanisms available, requires a 67-vote Senate supermajority (unless a president is too incapacitated to serve). As a result, even though Democrats controlled Congress in 1974, Nixon could not be removed without Republican legislators’ support.”

Jason Chaffetz is a profile in courage…now that it's safe for the cowardly wuss to speak his mind, on his way out. https://t.co/jRgm3h0VWA

Public Policy Polling released surveys in three states where a GOP senator will have a key swing vote on the GOP health care plan: Nevada, West Virginia and Alaska.  31% of all votes approve of the AHCA in Nevada; 29% in Alaska; and 35% in West Virginia.

In all three states, the survey found a majority had either “very serious” or “somewhat serious” concerns about the lack of public hearings on the Senate plan.

“The Supreme Court agreed Monday to hear a potential landmark case that addresses how far lawmakers can go in choosing their voters, rather than the other way around,” USA Today reports.

“Venturing into what one justice recently called the ‘always unsavory’ process of drawing election districts for partisan advantage, the court will try to set a standard — something it has failed to do in the past.”

Washington Post: “The justices regularly are called to invalidate state electoral maps that have been illegally drawn to reduce the influence of racial minorities by depressing the impact of their votes. But the Supreme Court has never found a plan unconstitutional because of partisan gerrymandering. If it does, it would have a revolutionary impact on the reapportionment that comes after the 2020 election, and could come at the expense of Republicans, who control the process in the majority of states.”

Rick Hasen: “This case represents the last best chance for a Court to rein in excesses of partisan gerrymandering, while Justice Kennedy, who has been the swing vote on this issue, remains on the Court.”

“The White House Press Secretary is getting to a point where he is kind of useless”- @Acosta https://t.co/6BxSrbCDDy

First Read: “In keeping with how off the conventional wisdom has often been — who saw Ed Gillespie having a closer primary in Virginia than Ralph Northam did? — it’s entirely possible that tomorrow’s special runoff in could have a more surprising outcome than GA-6. Ask yourself: What could produce bigger political shockwaves: Ossoff winning by two points in GA-6, or Archie Parnell (D) giving favorite Ralph Norman (R) a fight of his life in the race to fill OMB Director Mick Mulvaney’s congressional seat? (Mulvaney got nearly 60% of the vote in 2016.) “

The unpopularity of the GOP health care plan is putting 'swing vote' senators in a bind. https://t.co/CtCd4g5grR

“Alarmed by the stalemate on healthcare reform, lack of progress on tax reform and appropriations bills that are far behind schedule, Republican lawmakers across Congress are increasingly willing to consider cancelling the month-long August recess,” The Hill reports.

“Senate Republican negotiators reported that they are not close to a deal on healthcare reform and that scheduling a vote by July 4, which Senate Majority Leader Mitch McConnell (R-KY) has pushed, is likely unrealistic. That impasse has held up work on a budget resolution, which is necessary to move tax reform and the annual appropriations bills.”

A new study explodes a lot of myths about what happened in the 2016 election https://t.co/HRYPTXpdxi pic.twitter.com/OK8tCg8ZEW

A new study from the Democracy Fund Voter Study Group looked at polling data to discover there is really no such thing as “one kind of Trump voter” who voted for him for one single reason. Many voted with enthusiasm for Trump while others were primarily voting against Hillary Clinton.  The study finds there are actually five unique clusters of Trump voters: American Preservationists (20%), Staunch Conservatives (31%), Anti-Elites (19%), Free Marketeers (25%), and the Disengaged (5%).

Los Angeles Times: “Don Ritchie, historian emeritus of the Senate, said not since the years before World War I has the Senate taken such a partisan, closed-door approach to major legislation.”

“A century ago, Senate Democrats, at the urging of President Woodrow Wilson, drew up major tariff reforms while shutting out Republicans. But when Democratic leaders tried that again when they had large majorities during the Great Depression, rank-and-file senators revolted. It hasn’t happened since, he said.”

New York Times: “Representatives of Jared Kushner, President Trump’s son-in-law and senior adviser, have quietly contacted high-powered criminal lawyers about potentially representing him in the wide-ranging investigation into Russia’s influence on the 2016 election.”

“Some of Mr. Kushner’s allies have raised questions about the link between his current lawyer, Jamie S. Gorelick, and Robert S. Mueller III, the special counsel appointed to investigate the Trump campaign’s ties to Russia, according to one of the people who spoke on condition of anonymity.”

D.R. Tucker at the Washington Monthly on Bernie Sanders’ future as a progressive champion.  “Perhaps it’s time for Sanders’s strongest supporters to consider the idea that Sanders’s role is to be the Barry Goldwater of the left. Goldwater could not have, under any circumstances, become the President of the United States; however, his 1964 campaign cleared a path for a more charismatic and politically skilled right-winger to become Commander-in-Chief in 1980. History may well repeat on the other side of the aisle.

For now, progressives can respect Sanders’s 2016 achievement while also acknowledging that he may not be the best individual to continue carrying the torch for progressive principles. This is not to say that Sanders necessarily needs to leave the political stage, only that someone else will have to lead the “political revolution” he started. Hopefully, Sanders won’t be denied his rightful place in history as the man who pushed hard against political barriers, even if he couldn’t ultimately surmount them.”