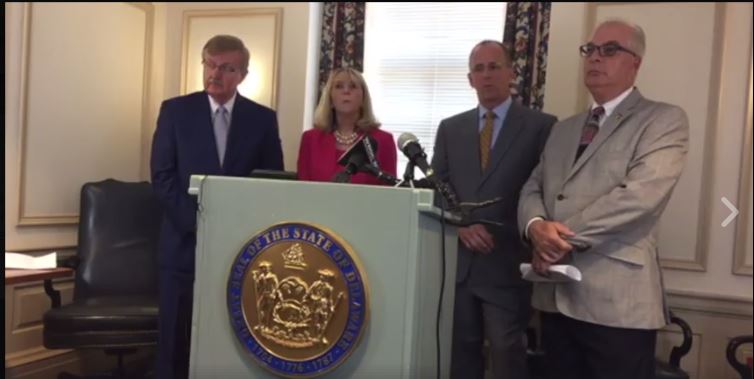 It seems odd to write that title especially since we are so often enraged by the results of the Delaware Way.  The Delaware Way I am talking about is personified by Return Day, when politicians who ran against each other appear with great ceremony in Georgetown to really bury a hatchet and to indulge in political gossip.  It is supposed to represent wiping the slate clean, so that everyone can get down to the business of making the State work better for Delawareans.

This Delaware Way is meant to describe a political atmosphere where politicians may disagree, may have differing ideas, but who do figure out how to make the state work under the circumstances of the day.  One hopes that these compromises are in the best interests of  Delawareans.  This approach that is typically pointed at compromise can make a progressive crazy — because your ideals and values too often end up on the cutting room floor to achieve a compromise.  If you are a progressive, you are too often scratching your head as to WHY certain compromises were made.  Still.  You could count on people mainly working at getting the business of Delaware done in good times and in bad times.

It looks from here that this year, Delaware’s GOP is specifically trying to break the Delaware Way.  We can talk about whether that is a good thing or bad thing.  But I want to point out that there is much serious thinking that the GOP is largely responsible for the current dysfunction of government, through 30+ years of breaking institutions, extreme politics and general disdain for the thing they so badly wanted control over.   We pointed out that the rhetoric of candidate John Marino was pointed at extending the specific dysfunction in DC to Delaware.  And now it looks as though the entire GOP legislative caucus has decided that breaking Delaware on behalf of their wealthy funders — rather than making it work for all of us — is going to be their answer to getting Delaware’s budget balanced.

And then there’s this recent exchange from a press conference the GOP had recently:

In spite of Rep Hudson asking if we should fund kindergarten and secondary education, or if we should just fund K through 12 education, the GOP is today taking credit for raising $100M of the funds needed to close the budget.  Their expectation is that you will not remember that they are not in the majority.  They expect that you will not know that this increased revenue came at the price of making sure that their wealthy funders got an Estate Tax break.   So they took the budget hostage just to get a tax break for the wealthiest Delawareans.

I don’t think that any of this counts as the Delaware Way.  It is fine, really, to advocate for your side, but taken together, this has the look of the Delaware GOP not giving a damn about getting this budget done by the end of the month.  As outraged as we all were, the Delaware Dems were at least trying to negotiate their way to a solution when they agreed to create more of a budget hole by eliminating the Estate Tax in order to get an agreement to raise the Franchise Tax.

And don’t get me started on the retrograde attitudes towards Muslims and women being displayed on your dime.  $400M in the hole is a genuine crisis, and it is well past time for the Delaware GOP to remember that the state’s health is in the balance here and they need to come to the table to help fix this thing, rather than continuing to make it worse by just trying to break the entire enterprise.

I’m not sure about what will happen between now and July 1, but we need a solution to the budget crisis — one that continues vital investments like education and makes a downpayment on the structural issues in the budget.  What we don’t need is Trump-era GOP breaking of government institutions so that rich people can get more of your hard-earned dollars while working people pay and pay and pay.

9 comments on “Delaware Republicans Are Breaking the Delaware Way”