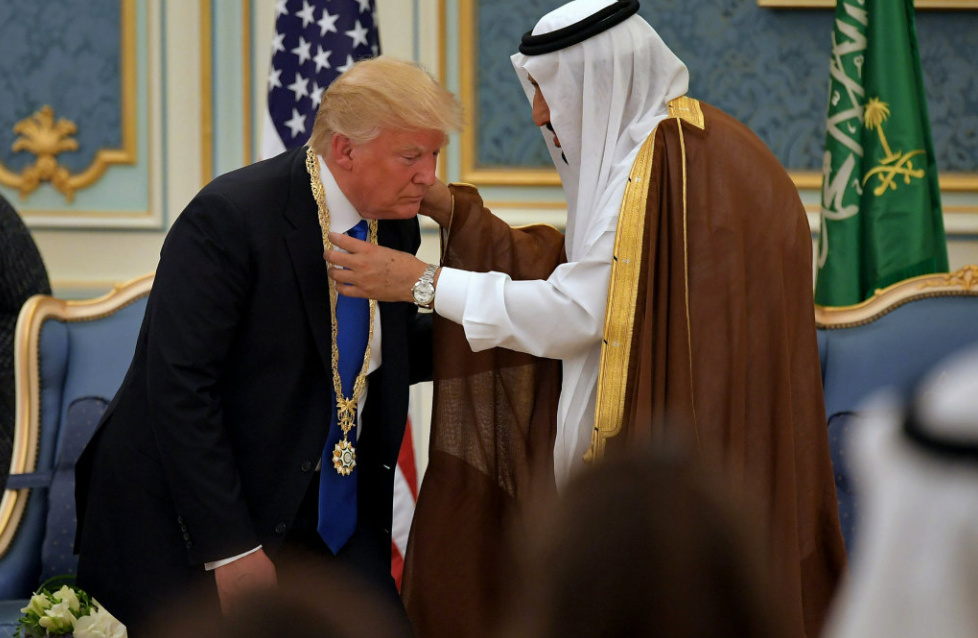 President Trump “has done business with royals from Saudi Arabia for at least 20 years, since he sold the Plaza Hotel to a partnership formed by a Saudi prince. Mr. Trump has earned millions of dollars from the United Arab Emirates for putting his name on a golf course, with a second soon to open,” the New York Times reports.

“He has never entered the booming market in neighboring Qatar, however, despite years of trying.”

“Now a feud has broken out among these three crucial American allies, and Mr. Trump has thrown his weight firmly behind the two countries where he has business ties, raising new concerns about the appearance of a conflict between his public role and his financial incentives.”

“Every president has regular contact with key Cabinet members, but Trump, who remains deeply mistrustful of career agency officials, has turned the White House into a hangout for his chosen department heads. Secretary of State Rex Tillerson has met with the president at least 34 times since he was confirmed in February,” Politico reports.

“Senior aides say Trump demands facetime with his appointees in part because he doesn’t trust bureaucrats who do the day-to-day work of the federal government. The president shuns them as tools of what he often refers to as the ‘deep state,’ and blames them for the frequent, unflattering news stories coming from his White House, according to two White House aides. But for Trump’s Cabinet members, proximity is a plus. Being physically present at the White House ensures that they have a say in policymaking — and serves as an indication of status with the president.”

Politico: “Special counsel Robert Mueller has added 13 attorneys — with more still to come — as his investigation quickly expands beyond potential collusion between President Donald Trump’s campaign with Russia to potential obstruction of justice case by the president… The prosecution team has experience going after everything from the Mafia and Enron to al Qaeda and President Richard Nixon.”

Young boy holds on to his Mom while law enforcement tries to take her away for Immigration laws 😞 pic.twitter.com/lOT9VCZGoT

Politico profiles Jason Kander (D), who lost his U.S. Senate race in Missouri last year but is in demand as a speaker at Democratic events across the country.

“It’s a measure of the Democratic Party right now that the politicians generating the most excitement are the former president, the former vice president, a 74-year old senator who’s not officially a Democrat, a 67-year old Massachusetts senator whom many centrists believe would turn the party’s economic to the radical left, and a guy who lost a Senate race. It’s a measure of Democrats’ current ‘anyone can run’ thinking around the 2020 field that Kander is being discussed at all—though that often gets stopped with a, ‘well, not anyone.’”

Byron York: “A key lesson emerged from the testimony of Attorney General Jeff Sessions before the Senate Intelligence Committee this week: Without the president’s decision to fire FBI Director James Comey, the Trump-Russia investigation would be on a downward trajectory. The collusion charge, originally the heart of the investigation, would be fading for lack of evidence. Investigators would be going down side roads involving Flynn and Manafort in which the public would have little interest.”

“But not after Comey. At the Sessions hearing, Democrats had nothing new on collusion. They barely seemed interested. Instead, they focused to a great extent on trying to get Sessions to reveal what the president did or did not say in private discussions — about Comey. On the Democratic side of the hearing — and much of the Republican side, as well — the issue was Comey, Comey, Comey. In the end, it could be that the president’s impatience to get rid of Comey in order to shorten an investigation that he believed to be going nowhere resulted in a new investigation that could last the rest of Trump’s time in office.”

“The array of legal and political threats hanging over the Trump presidency has compounded the White House’s struggles to fill out the top ranks of the government,” the Washington Post reports.

“Republicans say they are turning down job offers to work for a chief executive whose volatile temperament makes them nervous. They are asking head-hunters if their reputations could suffer permanent damage, according to 27 people The Washington Post interviewed to assess what is becoming a debilitating factor in recruiting political appointees.”

Key statistic: “At this point, Trump has 43 confirmed appointees to senior posts, compared with the 151 top political appointees confirmed by mid-June in President Barack Obama’s first term and the 130 under President George W. Bush.”

“Six members of the Presidential Advisory Council on HIV/AIDS have resigned, furious at what they say is the new administration’s regressive health policies and a lack of care from President Trump,” BuzzFeed reports.

The six wrote a letter to Newsweek: “As advocates for people living with HIV, we have dedicated our lives to combating this disease and no longer feel we can do so effectively within the confines of an advisory body to a president who simply does not care.”

In the weeks after the election, conventional wisdom suggested that a lack of economic opportunity in rural areas best explained why so many rural voters supported Trump. But the data doesn’t tell that story. The unemployment rate is only slightly higher in rural areas than cities, 5.3% vs. 4.8%, and the poverty rate is nearly the same, 17% vs. 16%.

A new Washington Post/Kaiser Family Foundation poll finds the political divide is actually more cultural than economic. Specifically, it’s rooted in “deep misgivings about the nation’s rapidly changing demographics, their sense that Christianity is under siege and their perception that the federal government caters most to the needs of people in big cities.”

The largest differences between rural and urban voters are tied to misgivings about the country’s changing demographics and how that has created perceived biases in federal assistance. By 56% to 37%, rural residents say the federal government does more to help people living in and around large cities. And rural voters are nearly three times as likely as urban voters to say that immigrants are a burden on the country, 42% to 16%.

The poll also reveals that perceptions about abuse of government benefits are linked closely with views about race and a strong belief among rural Americans Christian values “are under siege.”

Q: Why do u think gay parents aren't as legitimate as hetero parents?

“The ad, funded by a little-known group called the Principled PAC, opens with sounds of gunshots and footage of Rep. Steve Scalise (R-LA) being wheeled away on a stretcher after he and other members of the Republican congressional baseball team were ambushed by a lone gunman while practicing in a Washington suburb.”

“Watergate prosecutors had evidence that operatives for then-President Richard Nixon planned an assault on anti-war demonstrators in 1972, including potentially physically attacking Vietnam whistleblower Daniel Ellsberg,” according to a never-before-published memo obtained by NBC News.

“The document, an 18-page 1973 investigative memorandum from the Watergate Special Prosecution Force, sheds new light on how prosecutors were investigating attempts at domestic political violence by Nixon aides, an extremely serious charge… A plot to physically attack Ellsberg is notable because the former Pentagon official has long alleged that Nixon operatives did more than steal his medical files, the most well-known effort to discredit him.”

Playbook: “Speaker Paul Ryan spent the weekend at the Homestead in Virginia for his annual ‘Team Ryan’ summer outing. His message to K Streeters and donors: the Republican agenda is on track. The Wisconsin Republican laid out his preferred timeline for Obamacare repeal bill, saying that it will be done by mid-summer and tax reform will be completed by the end of the year. Ryan said that he expected the Senate to pass their health care bill before the July 4 recess and that would give House Republicans the rest of July to take action.”

“Ryan said he has been talking to Senate Majority Leader Mitch McConnell daily. Ryan also was bullish on infrastructure, telling the group that a series of infrastructure bills will be passed by the end of the year.”

That moment when @MalcolmNance calls Breitbart's @AlexMarlow out to his face about death threats Nance & family received b/c of fake news pic.twitter.com/n31IZgJI2k