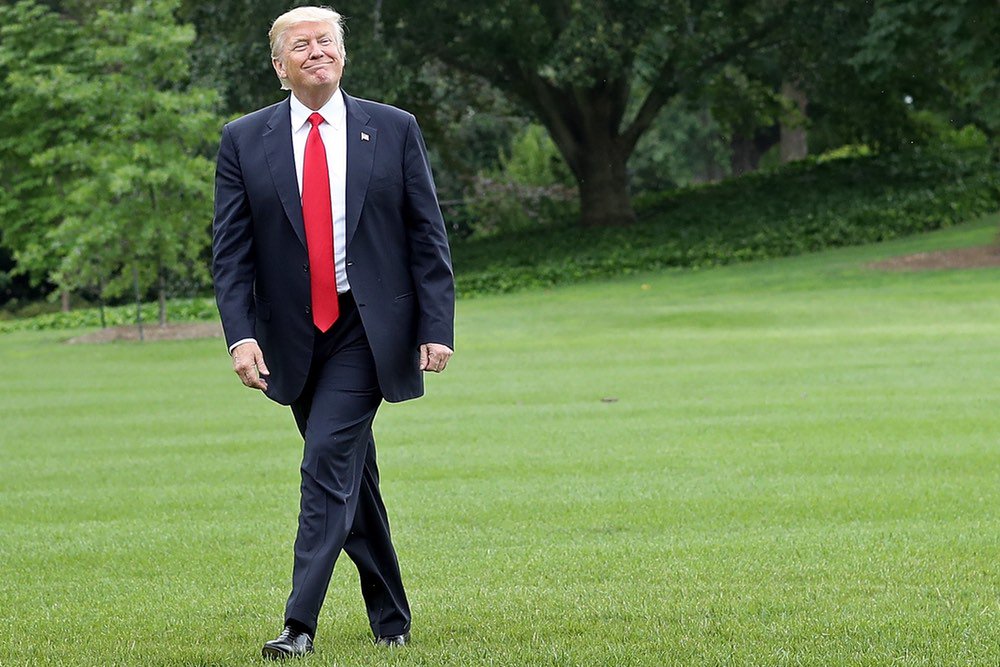 Mike Allen notes that with the Washington Post bombshell report that the obstruction probe is in full swing, White House officials and Republicans sweating profusely for several reasons:

Also troubling: “Any obstruction probe requires context, which means investigators digging into the finances of Flynn, Trump and Jared Kushner [See below for yet another bombshell on Kushner]. This is the phase of the probe many Republicans have always feared most.”

Jonathan Swan: “Republicans are seizing on a familiar — and for them, distressing — pattern: when President Trump applies unconventional or inappropriate pressure to ‘independent’ public officials, his intervention is often followed by damaging leaks.”

“About an hour after the Washington Post broke the story Wednesday that Special Counsel Robert Mueller is investigating Trump for possible obstruction of justice, I started hearing from Republicans who are starting to draw a straight line from Trump’s undisciplined venting to damaging leaks.”

Said one GOP operative close to the White House: “Leak was probably a response to stories about POTUS firing Mueller. Can’t fire him now.”

Special counsel Robert Mueller “is investigating the finances and business dealings of Jared Kushner, President Trump’s son-in-law and adviser, as part of the probe into Russia’s interference in the 2016 presidential election,” the Washington Post reports.

“FBI agents and federal prosecutors have also been examining the financial dealings of other Trump associates, including former national security adviser Michael Flynn, former campaign chairman Paul Manafort and Carter Page, who was listed as a foreign-policy adviser for the campaign.”

From Matt Egan at CNN Money: “President Trump loved to brag during the campaign about his business skills. Now that he’s in charge, business leaders seem alarmed by Trump’s political skills. A stunning 50% of the CEOs, business execs, government officials and academics surveyed at the annual Yale CEO Summit give Trump an “F” for his first 130 days in office. The survey, released earlier this week, found that another 21% give Trump’s performance a “D” so far. Just 1% of the 125 leaders polled awarded the billionaire an “A.”

The sham arguments Trump and his allies are making to discredit Robert Mueller: https://t.co/3mTekxNvHr pic.twitter.com/SiW9U1NLu8

Rick Klein: “A baseball game that literally pits the red team against the blue team has a chance to be more than that. But it’s only a chance, and it’s a fleeting one, if history is any guide. Tragedies tend to quiet politics, making once-urgent arguments seem petty, and serving as reminders of common bonds and shared commitments. That’s particularly true when service itself is under attack. But does anyone believe members of Congress will be applauding for the other side next week?”

“It’s not hard – or encouraging – to figure out what happens from here, in part because it started happening almost immediately. Political statements are made (this is politics, after all); someone will be accused of politicizing tragedy; everyone will be accused of politicizing tragedy; Democrats and Republicans will return to their respective dugouts.”

A new Gallup survey finds just 41% of Republicans say they are satisfied with the way things are going in the U.S., down 17 percentage points since last month.  Overall U.S. satisfaction dropped to 24%, down seven percentage points.

A new AP-NORC poll finds 65% of Americans think President Trump “doesn’t have much respect for the country’s democratic institutions and traditions or has none at all. Just a third of Americans, or 34%, thinks he has a great deal or even a fair amount of respect for them.”  Overall, 64% disapprove and just 35% approve of his job performance.

The Senate voted overwhelmingly “to allow Congress to block any efforts by the president to scale back sanctions against Russia, and to strengthen those sanctions in retaliation for Moscow’s alleged interference in the 2016 election and its actions in Syria,” the Washington Post reports.

“The vote of 97 to 2 is a sharp rebuke to President Trump’s posture on Russia and his resistance to the intelligence community’s assessment that the country was behind efforts to influence the election he won… Trump has repeatedly and openly doubted the intelligence community’s finding that Russia meddled in the presidential election. While his administration has not ordered a rollback of any existing sanctions, lawmakers have been concerned about his conciliatory, and at times even forgiving, rhetoric about Russia, as well as recent moves to give Moscow back control over two diplomatic compounds that the Obama administration reclaimed in late December.”

The two senators voting no?  Bernie Sanders and Rand Paul.  Why did Bernie vote against it?

“An American lobbyist for Russian interests who helped craft an important foreign policy speech for Donald Trump has confirmed that he attended two dinners hosted by Jeff Sessions during the 2016 campaign, apparently contradicting the attorney general’s sworn testimony given this week,” The Guardian reports.

“Sessions testified under oath on Tuesday that he did not believe he had any contacts with lobbyists working for Russian interests over the course of Trump’s campaign. But Richard Burt, a former ambassador to Germany during the Reagan administration, who has represented Russian interests in Washington, told the Guardian that he could confirm previous media reports that stated he had contacts with Sessions at the time.”

Matt Bai: “If you didn’t watch the opening of the president’s first full Cabinet meeting the other day, then you should, because it really was something.”

“Normally, Cabinet meetings start with some informal banter and maybe a few words from the president, while reporters and photographers record the moment for history. Trump started his meeting with a recitation of his accomplishments, which included a claim that he had ‘passed more legislation’ and ‘done more things’ than almost any president in history, with the possible exception of Franklin Roosevelt.”

“Since Trump has passed exactly no significant legislation to this point, we can read this only one of two ways: Either the 71-year-old Trump lives in Faraway Land and all this talk about the 25th Amendment isn’t as wishful as it seems, or he knows the cable networks would carry him live even if he were in a coma, and he’s deliberately laying out a completely fabricated reality for voters who distrust the media or don’t have time to consume it.”

“I’m going with that last one.”

NBC News: “The Senate is closing in on a health care bill that could affect coverage for tens of millions of Americans and overhaul an industry that makes up one-sixth of the economy. Only one problem: Almost no one knows what’s in it. In a striking break from how Congress normally crafts legislation, including Obamacare, the Senate is conducting its negotiations behind closed doors. The process began five weeks ago, after the House passed its version of health care reform, with a small working group of 13 senators that included no women. The opaque process makes it impossible to evaluate whether there are any significant changes coming to health care. There are no hearings with health experts, industry leaders, and patient advocacy groups to weigh in where the public can watch their testimony or where Democrats can offer amendments.”

David Nather: “Senate Republicans say they still have a ways to go before they’re ready to vote on a health care bill, despite their (very recent) predictions that the whole thing would be wrapped up before July 4. Republicans aren’t there yet, in part, because they’re still bouncing proposals off the Congressional Budget Office — and the results of those conversations will affect what’s in the final bill.”

How Mitch McConnell's health care strategy might lead to Medicare for all: https://t.co/ILwBTf293B

Ron Brownstein: “Scandals have typically operated as a cloud over a president’s agenda. But the Russia-related legal challenges swirling around President Trump are functioning more like a cloak for his joint agenda with congressional Republicans. That difference captures the GOP’s decision to govern in a manner aimed almost entirely at stoking their hard-core base—a critical calculation that could determine their fate in the 2018 election, and possibly the 2020 contest, as well.”

“As Trump’s presidency careens through increasingly turbulent waters, congressional Republicans are lashing themselves ever more tightly to its mast.”

Politico: “The greatest threat to Trump and his presidency, say administration officials and outside advisers, comes from his own conduct and obsessive behavior after he took office. While congressional and FBI investigations may prove Trump or his team broke laws before he took office, his advisers say they’re more worried that the things he’s done since the inauguration may have left him exposed to obstruction of justice or other charges.”

“Trump, for months, has bristled almost daily at the ongoing probes. He has sometimes, without prompting, injected ‘I’m not under investigation’ into conversations with associates and allies. He has watched hours of TV coverage every day — sometimes even storing morning news shows on his TiVo to watch in the evening — and complained nonstop.”

The Fix: Trump keeps creating his own personal hell.

In 2016, Trump warned of endless investigations of Hillary Clinton.

Amy Walter: “So much is happening in Washington and yet nothing is happening at all. The investigation into Russian meddling into the 2016 campaign continues to get lots of attention (and produce a lot of leaks), but it’s not likely to come to a conclusion anytime soon. Republicans fret privately about the president and publicly lament his lack of Twitter discipline, yet they show no signs of abandoning him. The imminent White House shake-up (Reince is out! Bannon is out!) has yet to materialize. And, the GOP-led government has yet to produce any significant legislative accomplishments. Meanwhile, President Trump’s lack of message discipline continues to undercut his agenda and his own political standing.”