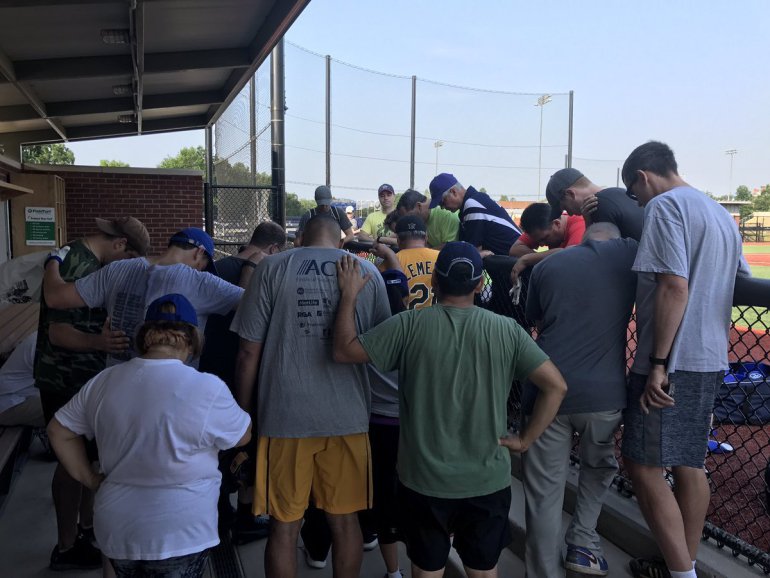 David Frum on yesterday’s shocking shooting of a Congressman and four others at a baseball practice: “America is more vulnerable to assassins than most other democracies, for many reasons. The United States is a less-surveilled society than Britain or France. American police forces are more decentralized than those of most European countries. Above all, the U.S. is vulnerable to this crime because targeted killing typically requires access to a gun—and guns are easier to acquire here than in any comparably developed society. We’ll learn more about when the Alexandria murderer decided on his crime, and whether his weapon was legally acquired. The commonwealth of Virginia certainly did its utmost to ease his way, however, by conferring the legal right to move about with an openly brandished rifle. (The City of Alexandria, though, where the shooting took place, bars the open carry of assault weapons.)

In the wake of this crime, as after the Gabby Giffords attack in 2011, we’ll soon be talking about whether and when political rhetoric goes too far. It’s an important conversation to have, and the fact that the president of the United States is himself the country’s noisiest inciter of political violence does not give license to anyone else to do the same. Precisely because the president has put himself so outside the boundary of political decency, it is vitally important to define and defend that border. President Trump’s delight in violence against his opponents is something to isolate and condemn, not something to condone or emulate.

The good news for American society is that this isolation and condemnation will happen. Across the political spectrum, there is only revulsion. The danger in acts of political violence like this is that some unscrupulous people will use this crime to write a narrative of victimhood to justify their own preparations for political violence in what they will wrongly regard as self-defense. Two days ago, hundreds of heavily armed vigilantes assembled in a Houston park, summoned by a false rumor that the city would remove a statue of Sam Houston. Their intent was to intimidate, but intimidation could under unlucky circumstances easily have tipped into outright violence. That kind of supposedly defensive, actually aggressive, violence has become an even graver risk after today, in an American society that regards personal arsenals to be at least as much of a human right as the rights of free speech and peaceful assembly—and in actual practice, often a more fundamental right.”

“The special counsel overseeing the investigation into Russia’s role in the 2016 election is interviewing senior intelligence officials as part of a widening probe that now includes an examination of whether President Trump attempted to obstruct justice,” the Washington Post reports.

“The move by Special Counsel Robert Mueller to investigate Trump’s own conduct marks a major turning point in the nearly year-old FBI investigation, which until recently focused on Russian meddling during the presidential campaign and on whether there was any coordination between the Trump campaign and the Kremlin. Investigators have also been looking for any evidence of possible financial crimes among Trump associates.”

“Trump had received private assurances from former FBI Director James Comey starting in January that he was not personally under investigation. Officials say that changed shortly after Comey’s firing.”

Mike Allen reports:  “[W]hen he was asked, … ‘[W]hat did [Trump] say about the rationale for firing Comey,’ the attorney general refused to answer. That goes to the heart of the question of whether the president may have obstructed justice.”

Between the lines: Matt Miller, an Obama Justice Department official who has become a go-to commentator on the investigation, emailed me: “[N]o immediate public revelation, but a red flag in front of the bull named Bob Mueller. … If Sessions had a good answer about conversations with Trump about firing Comey, he would’ve just given it.”

“Sessions can probably get out of ever giving the answer to a Republican Congress, but my guess is his performance earned him a ticket to a grand jury.”

This whole "political rhetoric creates a climate" stuff is ahistorical crap. Allow me to explain 1/

Click on that tweet and read the whole thread.  He is right.  Partisan media and hyperbolic partisan talk has been an American tradition since the beginning.  I know because I am a frequent deployer of hyperbole.  Once I crossed the line (round them all up in 2008), and I almost immediately apologized.   So we have to be careful to not let political passion lead to violent talk.  But hyperbole (and factual statements that opponents would call hyperbole) is as American as apple pie (and freely available guns).

And it is not me or my side that engages in hyperbole.  Here is a quote from last year from Rand Paul:

Now, I choose to think he is being hyperbolic.  If he was serious, well then I suggest he and other Republicans (like Chris Collins in New York who blamed Democratic rhetoric for the shooting) look in the mirror if they want to blame someone.  Perhaps spending the last eight years talking about Second Amendment Remedies was not such a good idea.

Republican Senators are walking into a mine field with the AHCA.   It’s no secret that the American Health Care Act is unpopular. In recent national polls, only about 29 percent of Americans support the bill. It is the most unpopular piece of major legislation Congress has considered in decades — even more unloved than TARP (“the bailout”), and much more unpopular than the Affordable Care Act, also known as Obamacare.

Donald Trump’s abysmal 66-28 disapproval rating and outgoing GOP Gov. Chris Christie’s even more horrific 81-15 disapproval spread in Quinnipiac’s latest survey are undoubtedly doing Guadagno no favors in this Democratic-leaning state. Murphy has so far dominated in every poll, but no other outfits aside from Quinnipiac appear to have released any surveys here.

I say to Republicans: If you can’t defend your efforts to throw millions off health care to give huge tax breaks to the top 2%, give it up. pic.twitter.com/KExeCeAhAh

Gabriel Sherman: “As Fox News moves further into the post–Roger Ailes era, the network is shedding one of its most iconic elements. According to network executives, Fox News has abandoned the marketing slogan ‘Fair & Balanced.’ The decision was made last August after Ailes’s ouster by Fox News co-president Jack Abernethy, because the phrase had ‘been mocked,’ one insider said. Another executive explained that the tagline was ‘too closely associated with Roger.’ Fox executives have been instructed by management to market the network by its other tagline: ‘Most Watched. Most Trusted.’”

“It is hard to overstate the significance of what shedding ‘Fair & Balanced’ means for Fox News. (It would be like the New York Times giving up ‘All the News That’s Fit to Print.’) Ailes invented the slogan when he launched the network in 1996, and over the years it became a quasi-religious doctrine among Fox’s anchors and viewers.”

Ryan Lizza: “In his letter announcing Comey’s dismissal, Trump made a point of advertising these conversations with Comey, noting, ‘I greatly appreciate you informing me, on three separate occasions, that I am not under investigation.’ When Comey went public, last week, with his account of his interactions with Trump, the President’s defenders pounced on the fact that Comey corroborated Trump’s claim.”

“The irony in all of this is that Trump’s actions may very likely have caused him to personally come under investigation.”

“There is some public evidence that Mueller is taking the obstruction accusation seriously. He asked for and received all the memos that Comey wrote memorializing Comey’s interactions with Trump. Why would Mueller need those unless he was looking into possible obstruction?”

John Cassidy: “Trump isn’t merely enabling the Republican right; with his daily pratfalls and incendiary statements, he is also drawing attention away from the Party’s policy initiatives. Imagine for a moment if a more normal Republican—a Marco Rubio or a Jeb Bush or a John Kasich—were in the White House. With no James Comey, Robert Mueller, or Jeff Sessions to chew on, the news networks would surely be focusing on health-care reform and the scandalous manner in which the G.O.P. is trying to ram through a piece of legislation that would affect a sixth of the American economy and cause tens of millions of Americans to lose their insurance.”

“Small wonder, then, that so many Republicans are willing to kiss Trump’s ring. He’s given the G.O.P. what it has long wanted: a White House willing to go along with its reactionary agenda, and a President who provides it with political cover. As long as Trump sticks to his side of the deal, he can expect to receive the loyalty he so prizes.”

“Not with respect to the Second Amendment. The Second Amendment right to bear arms is to ensure that we always have a republic. And as with any constitutional provision in the Bill of Rights, there are adverse aspects to each of those rights that we enjoy as people. And what we just saw here is one of the bad side effects of someone not exercising those rights properly. But we’re not going to get rid of freedom of speech because some people say some really ugly things that hurt other people’s feelings. We’re not going to get rid of Fourth Amendment search and seizure rights because it allows some criminals to go free who should be behind bars.”

I will grant you that this is as reasonable as a pro-Second Amendment pro-gun rights advocate can make.  I would only add that neither right Mr. Brooks mentioned is absolute.  There are regulations on the time, place and manner of speech.  Regulations and laws against defamation.   There are exceptions to the Fourth Amendment protection against searches and seizures.    Just like there should be exceptions and regulations to and of the Second Amendment.

First Read: “Democrats start out with the advantage in this fall’s Northam-vs.-Gillespie general election. One, turnout suggests Democrats have enthusiasm on their side: There were more than 540,000 votes in the two-person Dem race, while the three-person GOP contest had 366,000 votes. (That turnout disparity looks like New Jersey, not Virginia.) Two, Democrats today hold a unity event with Northam and Perriello, while Republicans aren’t unified. ‘There is one word you will never hear from me, and that’s ‘unity,’’ Stewart told supporters, per the Washington Post. And three, President Trump’s job approval rating in Virginia is in the 30s. Add them all up, and you’d rather be Ralph Northam than Ed Gillespie, although we still have five months to go.”

“Since President Trump won the Republican nomination, the majority of his companies’ real estate sales are to secretive shell companies that obscure the buyers’ identities,” a USA Today investigation has found.

“Over the last 12 months, about 70% of buyers of Trump properties were limited liability companies – corporate entities that allow people to purchase property without revealing all of the owners’ names. That compares with about 4% of buyers in the two years before.”

Democrats must lay down a marker right now, to force the @GOP’s hand. pic.twitter.com/Nq8aWocVwP