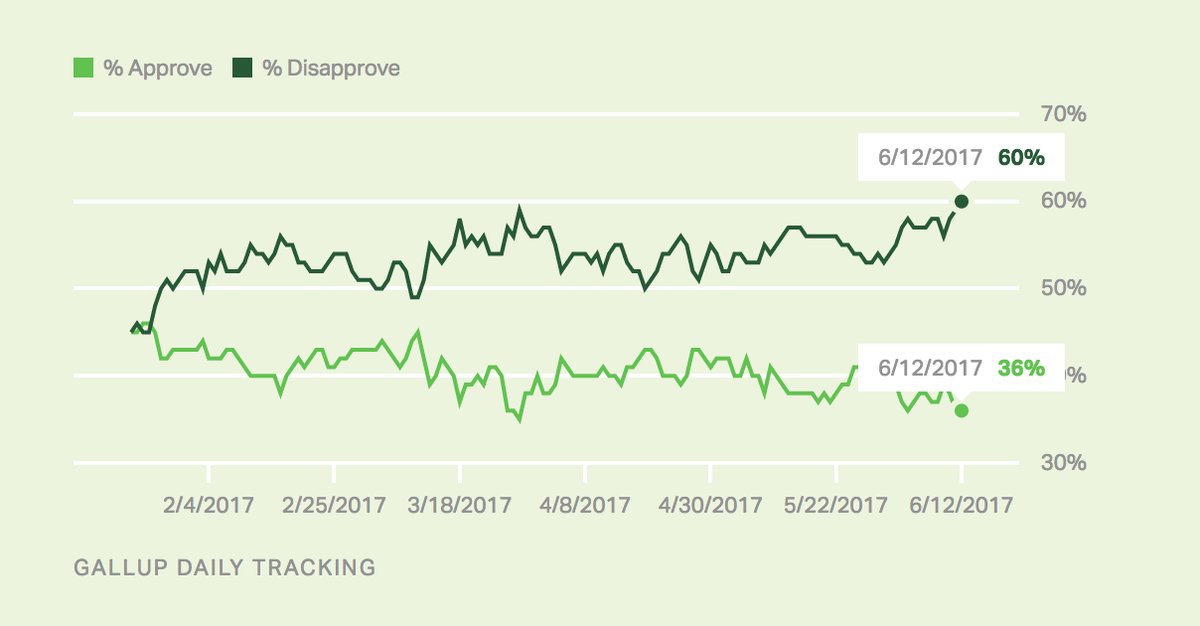 Congressional sources say President Trump has told Republican senators that the House health care bill is “mean” and that the Senate version should be “more generous,” the AP reports.

“The remarks were a surprising critique of a Republican-written House measure whose passage Trump fought for and embraced. They also seem to undercut efforts by Senate conservatives to impose restrictions in their chamber’s legislation, such as curbing the Medicaid health care program for the poor and limiting the services insurers must cover.”

Playbook: “Imagine if you’re a House Republican, and voted for the leadership’s health-care bill in May after being told that you were doing the newly elected president a solid. You listened to the White House’s pleading — perhaps you got a phone call from Vice President Mike Pence, Chief of Staff Reince Priebus or even the president himself. The administration was on the Hill nonstop to push their legislation. You explained to your constituents that the late-in-the-game changes made to the bill helped cover more people. You celebrated with him in the Rose Garden after passage.”

“Now you hear the president has gone behind closed doors and told senators the House bill is ‘mean’ and says it doesn’t do enough to cover people. Wouldn’t that anger you? Well, it’s angering a lot of House Republicans, who believe their president put them at political risk with that comment.”

“If you’re a House Republican, are you going to help the White House next time after the president privately just dumped all over you after you cast a vote for him? A lot of GOP lawmakers are buzzing about it, and many are none too pleased with the president right now.“

Attorney General Jeff Sessions forcefully denied meeting with any Russian officials in 2016 to discuss the presidential campaign, calling allegations that he had undisclosed meetings with them an “appalling and detestable lie,” the Wall Street Journal reports.

“He also specifically denied holding any private meetings with the Russian ambassador to the U.S. at the Mayflower Hotel, a Washington establishment that has been the subject of speculation in recent days.”

Josh Marshall: “Big picture: Sessions refused to answer the biggest questions; he was almost certainly not telling the truth about what triggered his refusal. Most of the rest was atmospherics.”

WATCH what GOP did in the #Clinton investigation when witnesses refused to answer questions but didn’t assert exec. priv. #SessionsHearing pic.twitter.com/iehIepgSBW

“The current rules do not provide the President the authority to unilaterally fire the special counsel — the action requires changing the rules or demanding other officials carry out the request.”

Trump apparently wanted Mueller to think he might be fired because … Mueller would be cowed into exonerating him? https://t.co/kndgMDtOd6

This kind of attempt at intimidation is also obstruction of justice.  I suppose we are up to Article V of Impeachment now.

New York Times: “The president… began entertaining the idea of firing Mr. Mueller even as his staff tried to discourage him from something they believed would turn a bad situation into a catastrophe, according to several people with direct knowledge of Mr. Trump’s interactions. … For now, the staff has prevailed.”

“But people close to Mr. Trump say he is so volatile they cannot be sure that he will not change his mind about Mr. Mueller if he finds out anything to lead him to believe the investigation has been compromised. And his ability to endure a free-ranging investigation, directed by Mr. Mueller, that could raise questions about the legitimacy of his Electoral College victory, the topic that most provokes his rage, will be a critical test for a president who has continued on Twitter and elsewhere to flout the advice of his staff, friends and legal team.”

Bloomberg: Russian intrusion into U.S. election systems before the 2016 presidential election was much more widespread than publicly disclosed — including intrusions into voter records and software systems in twice as many states as we were told.

Investigators found evidence that hackers tried to delete or alter voter data in Illinois. They also accessed software designed to be used by poll workers on Election Day, and in at least one state, accessed a campaign finance database. Bloomberg cited details provided by “three people with direct knowledge of the U.S. investigation.” In all, the hackers got into systems in 39 states, one of them said.

The scope and sophistication so concerned Obama administration officials that they took an unprecedented step — complaining directly to Moscow over a modern-day “red phone.” In October, two of the people said, the White House contacted the Kremlin on the back channel to offer detailed documents of what it said was Russia’s role in election meddling and to warn that the attacks risked setting off a broader conflict.

Why is Donald Trump like this? Trump’s biographer explains the man and his motivations: https://t.co/Fl6eMl92vR pic.twitter.com/kQmLTu9QH0

Marc Kasowitz, President Trump’s personal lawyer in the Russia investigation, “has boasted to friends and colleagues that he played a central role in the firing of Preet Bharara, the United States Attorney for the Southern District of New York,” ProPublica reports.  Kasowitz told Trump: “This guy is going to get you.”

“Those who know Kasowitz say he is sometimes prone to exaggerating when regaling them with his exploits. But if true, his assertion adds to the mystery surrounding the motive and timing of Bharara’s firing.”

“House GOP efforts to write a fiscal 2018 budget are deadlocked amid Republican infighting, a divide that threatens to undermine President Trump’s agenda by stalling tax reform and delaying progress on appropriations,” Politico reports.

“The House Budget Committee is months behind its usual timeline in releasing and marking up its annual fiscal blueprint. While the panel said it hoped to release the budget by early June, conference-wide bickering over priorities and spending levels have all but ground the process to a halt.”

USA Today: “Nearly 200 Democratic members of Congress filed a lawsuit against President Trump on Wednesday morning alleging that his continued ties to his business empire violate the U.S. Constitution. The unprecedented legal action accuses Trump of violating the Emoluments Clause of the U.S. Constitution, which prohibits federal officials from accepting gifts or titles from foreign governments without congressional approval.”

“The lawsuit will have the greatest number of congressional plaintiffs of any lawsuit against the president in the nation’s history.”

Jennifer Rubin: “What if Trump decides to fire special counsel Robert Mueller, as Trump confidante Chris Ruddy, chief executive of NewsMax, said Trump is considering? That would spark a good deal of outrage in the press and among independents and Democrats. It might even cost Trump some support from sensible Republicans. A wholesale mutiny among Republicans however would not be guaranteed — even then. That reality gives one a full appreciation for how reluctant Republicans are to step out of line — even when it comes to defending an independent investigation by a man many of them praised.”

“In sum, the sad answer is that these Republicans won’t act out of principle, won’t challenge the right-wing echo chamber and won’t give up the delusion that they can get parts of their agenda through. Given truth serum, nearly all would prefer Pence to replace Trump; they just cannot summon the courage to make that happen. I suppose some undeniable smoking gun either of Trump’s Russian complicity or obstruction could force their hand, but increasingly it looks like the only thing that will convince them to abandon Trump is the certain prospect of political ruin. Even more likely, they’ll have to lose the House in 2018 before they realize Trump is politically radioactive.”

“Voters have greater faith in former FBI Director James Comey to tell the truth than in President Donald Trump, who has disputed the veracity of Comey’s sworn testimony before a Senate committee last week. A new Politico/Morning Consult poll conducted in the days following Comey’s appearance before the Senate Select Committee on Intelligence, 45% of voters said they trust Comey more to tell the truth, compared to 32% for Trump. Twenty-three percent have no opinion.”

Days to hit a 60% disapproval rating:

“If Republicans don’t act fast, Democrats will pitch their plan for single-payer, universal health care as a choice between something that costs individuals less vs. more, that is simpler vs. more complicated, that leads to greater equality vs. more inequality,” writes freaked out Republican strategist Ed Rogers in The Washington Post. “Republicans should be on the lookout. While we try to muddle through repealing and replacing Obamacare, Democrats are sharpening their message on health care. In their race to the left, Democrats are increasingly calling for a full-fledged single-payer system. And considering Republican credibility on repeal-and-replace is damaged, if not shot, the Democrats’ message will be compelling to a lot of voters who sense nothing but confusion from the GOP. The momentum is shifting, and the stakes are getting higher for Republicans…And in this fight, Republicans cannot just become the party of no. If Republicans fail to stand up and speak with clarity, we may be forced to defend the remnants of Obamacare as the best option to ward off socialized medicine. The public senses confusion, and the Democrats sense an opportunity. Time is running out.”

President Trump’s tweets continue to be cited in court decisions. This from the 9th circuit just now: pic.twitter.com/4qN3thefAq

Ronald Browstein writes at The Atlantic: “If the continued decline of blue-collar whites is the principal warning sign for Republicans in the new figures, the red light flashing most brightly at Democrats is the disappointing turnout among minorities. Though Trump presented a uniquely polarizing and provocative foil, the Census figures showed that turnout in 2016 sagged among Hispanics and skidded among African Americans[.] ”

“Among Hispanics, the States of Change analysis found that turnout declined slightly among those with a college education (down from nearly 71 percent in 2012 to just over 68 percent in 2016) and among those without (from just under 44 percent last time to just under 43 percent this time). Overall, the Census put total Hispanic turnout at just under 48 percent, which is within the narrow range of 47 percent to 50 percent over the past four presidential elections that has frustrated Democrats hoping for larger gains and greater impact.”

“The most positive sign for Democrats was state-level Census data showing Hispanic turnout surging in Arizona and improving somewhat more modestly in Nevada and Colorado, all states where the party made a significant organizational effort. (Surprisingly, the Census data show Hispanic turnout declining from 2012 in Florida and slipping modestly in Virginia and North Carolina.)

In 2016, turnout sagged to about 73 percent among college-educated African Americans (down from nearly 80 percent in 2012) and to about 56 percent among those without degrees (down from over 63 percent in 2016). Overall, the Census data showed turnout among eligible African Americans dropped fully 7 percentage points from 2012 to 2016, the biggest drop over a single election for the group since at least 1980. In the battlegrounds that tipped the election to Trump, state-level Census data show black turnout plummeting in Wisconsin; skidding in North Carolina, Florida, and Ohio; and declining more modestly in Michigan and Pennsylvania.”