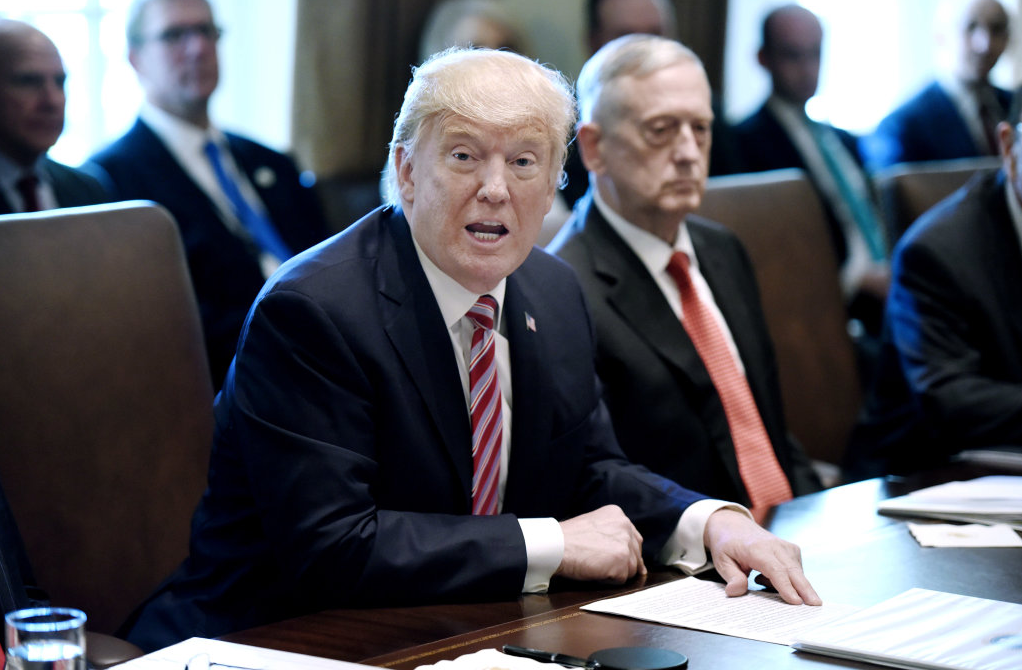 “Senate Republicans are on track to finish writing their draft health care bill this evening, but have no plans to publicly release the bill,” Axios reports. Said one of the aides: “We aren’t stupid.”

One issue is that Senate Republicans plan to keep talking about it after the draft is done: “We are still in discussions about what will be in the final product so it is premature to release any draft absent further member conversations and consensus.”

GREAT meeting today with the best staff in the history of the world!!! pic.twitter.com/ocE1xhEAac

To understand why this is so funny, you had to see video of Trump’s absolutely messianic Cabinet meeting yesterday.   For starters, President Trump, as quoted by CNN,  said “Never has there been a president….with few exceptions…who’s passed more legislation, who’s done more things than I have.”

If by “few,” you mean “many” or “vast majority” or “all.”  The President then went round the table and encouraged his cabinet secretaries to praise him.  No seriously.

All 23 Cabinet member, ranked by their obsequious praise for Trump todayhttps://t.co/sYytFYB86D

And then there was this:

WH Chief of Staff Reince Priebus to Trump: “We thank you for the opportunity and blessing to serve your agenda” https://t.co/L7DEdZUjV3

A new Public Policy Polling survey finds 49% of voters think President Trump obstructed justice, to just 41% who don’t think he did.  Also interesting: Only 37% of voters say they think Trump is honest, as compared to 56% who say he’s not. And for the second month in a row a plurality support for impeachment: 47% are in support compared to 43% who are opposed. Voters trust Comey over Trump by a 51 percent to 39 percent margin. A majority of 53 percent call him a liar to 41 percent who disagree. Finally, 59 percent of voters support an independent investigation into Russia to 31 percent who oppose it, while 37 percent of voters think the Russia story is “fake news.”

Further, PPP finds President Trump’s supporters are split on whether it’s appropriate for a politician to “body-slam” a journalist: 45% say it’s not acceptable while 42% said it was.

Mike Allen: “Beyond his base voters, Trump has an even bigger potential problem looming with his base in Congress. While Republican lawmakers won’t say it publicly, it’s widely known if they could pick between President Pence and President Trump, the Vice President would win 90% of the vote among the GOP.”

“Bill Clinton benefited from a large number of true fans and believers among elected Democrats when he survived impeachment. Trump has few authentic fans or loyalists in Congress. So if things take a turn for the worse, GOP flight could come fast and furious — since the end result would be President Pence.”

Treasury Secretary Steven Mnuchin said the Treasury Department “only has enough money to fund the government through early September, a much earlier timeline than many analysts had projected,” the Washington Post reports.

“Mnuchin’s comments, made at a congressional hearing, came in response to a question about the debt ceiling, which is preventing Treasury from borrowing enough money to cover the large gap between how much money the government brings in through revenue and how much it spends.”

Timothy O’Brien: “A decade ago, my lawyers questioned Trump under oath during a deposition in a libel case he filed against me for a biography I wrote, TrumpNation. (Trump lost the case in 2011.) Trump had to acknowledge 30 times during that deposition that he had lied over the years about a wide range of issues: his ownership stake in a large Manhattan real estate development; the cost of a membership to one of his golf clubs; the size of the Trump Organization; his wealth; the rate for his speaking appearances; how many condos he had sold; the debt he owed, and whether he borrowed money from his family to stave off personal bankruptcy.”

“Trump also lied during the deposition about his business relationships with organized crime figures.”

FiveThirtyEight: “The race remains too close to call. Ossoff’s lead is slim, especially given the past accuracy of special House election polling, and we simply don’t know what to expect voter turnout to be in Round 2 compared with Round 1. Still, it’s significant that Ossoff has maintained and even widened his lead as voters make up their minds, because it suggests that undecided voters aren’t overwhelmingly Republican. It’s possible that Handel will pick up the vast majority of the remaining undecided voters in the campaign’s final days, but there’s no reason to expect that to happen.”

“Ossoff’s small lead in Round 2 shouldn’t be too surprising because it’s exactly what the polls before Round 1 indicated might happen.”

Stuart Rothenberg: “Jon Ossoff’s defeat would not tell us what will happen seventeen months from now in the 2018 midterms any more than Republican Tim Burns’ defeat in a 2010 Pennsylvania special election presaged that year’s midterm outcome nationally. And it probably wouldn’t impact Democratic recruiting much or dry up fund raising for very long.”

“But a Democratic loss would have a significant impact on the political narrative of the summer and early fall, right up to November’s gubernatorial contests in New Jersey and Virginia. And another special election defeat, in an upscale district that did not embrace Donald Trump the way districts in Kansas and Montana did, would lead to another round of finger-pointing and self-flagellation by Democrats still consumed by their 2016 defeat.”

Trump would have to direct Rosenstein to fire Mueller, or order sp. counsel regulations repealed and then fire him https://t.co/ZoPJgJLPoy

Does Newt know we can see old tweets? pic.twitter.com/rzU7ah8pNG

Just Security: “Following James Comey’s hearing on Capitol Hill, the Department of Justice issued a statement which flatly contradicts something that Comey said in his testimony. It appears that Comey and Jeff Sessions have directly opposing positions on how the Attorney General responded when Comey says he implored Sessions to prevent the president from directly communicating with him as FBI director. It is increasingly common these days for the administration to include a falsehood in an official statement. Repeating that falsehood under oath before Congress is an entirely different matter. It’s a federal crime. And these proceedings have a special counsel looking over them.”

“What to watch for next: On Tuesday, Attorney General Jeff Sessions will appear before the Senate Intelligence Committee. If he repeats a claim that is contained in the Department of Justice’s ‘Statement on Testimony of Former FBI Director James Comey,’ it is very likely that Sessions will commit perjury or a felony false statement or misrepresentation (which does not require being under oath).”

Secret Service: Doesn’t have audio recordings or transcripts made in Trump White House https://t.co/rmLt3sNpm2 via @WSJ

The U.S. Secret Service has no audio copies or transcripts of any tapes recorded within President Trump’s White House, the Wall Street Journal reports.

“The agency’s response to a freedom of information request submitted by The Wall Street Journal doesn’t exclude the possibility that recordings could have been created by another entity. The question of a White House recording system has lingered for more than a month since Mr. Trump first raised the possibility in a provocative tweet about fired FBI Director James Comey.”

Playbook: “Republicans are growing increasingly worried that they will lose the House of Representatives. The pervasive pessimism comes as there continues to be a dearth of legislative victories, and a toxic political environment that appears to be worsening. Of course, the midterm elections are nearly a year and a half away. But more than a dozen Republicans we’ve spoken to in the last few weeks say the prospect for political and legislative wins big and small is dimming. And as much as President Donald Trump has worked to woo over fellow Republicans with dinners at the White House and regular meetings with GOP leadership, it hasn’t had much of an impact on the overall state of play.”

“What does all this mean? Republicans will be less willing to take risks as they shift into political survival mode.”

Having won in the House on health care, the Freedom Caucus is prepping to hold the budget hostage to new demands: https://t.co/rrvQLnxJsN

Sarah Kliff: “Senate Republicans began to coalesce around the framework of a plan to repeal and replace the law last week. Their plan would, like the bill the House passed in May, almost certainly cause millions of low-income Americans to lose coverage by ending the Medicaid expansion. It would help the young and healthy at the expense of the older and the sick.”

“Meanwhile, across the nation, health insurance plans are beginning to flee the Obamacare marketplace. They’ve cited the uncertainty around the health care law’s future, sown by congressional Republicans and the Trump administration. The number of counties with zero health plans signed up to sell 2018 coverage keeps growing.”

“The possibility that Republicans will repeal Obamacare or drive it into collapse is an increasingly real one. That’s a reality where millions fewer have health insurance coverage and lower-income Americans struggle to afford coverage.”

Paul Waldman asks why Trump was so obsessed with protecting Mike Flynn: “One thing we can say for sure is that Trump was not going to this trouble — including what looks a lot like obstruction of justice — just because he thought Flynn was a “good guy,” and Trump is such a mensch that he’ll do anything for a good guy. No one who is familiar with Trump could believe that… I don’t have a good answer. But the idea that it’s just because he likes Flynn is impossible to believe. What we’re left with then is Trump’s own self-interest.

It may be that Trump believes Flynn is the keystone of the Russia scandal, and if he goes down then the scandal will accelerate until it reaches the Oval Office. It may have something to do with some piece of information or relationship we know nothing about. But what’s obvious is that Trump is trying very hard to keep Flynn out of harm’s way, or to keep him happy. If we can figure out why, we may understand this whole scandal a great deal better.”

Hollywood Reporter: “Critics argue that NBC’s platform legitimizes the views of a man who, among other conspiracy theories, has suggested that the killing of 26 people at the Sandy Hook Elementary School in Newtown, Connecticut, in 2012 was a hoax. The network released a brief portion of the interview, which is scheduled to air on Sunday.”