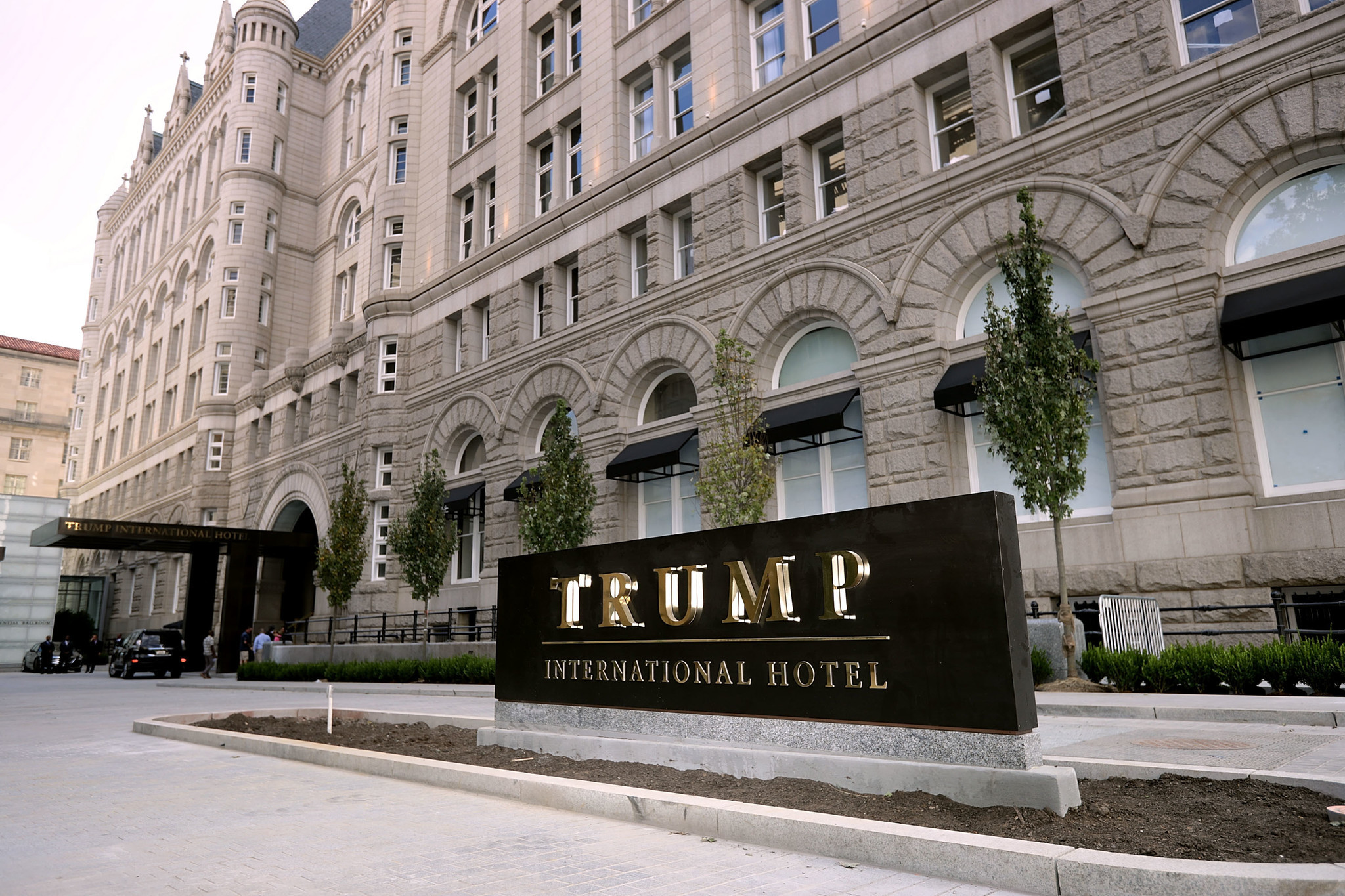 D.C. Attorney General Karl Racine and Maryland Attorney General Brian Frosh plan to sue President Trump for violating the Constitution’s emoluments clause, which forbids federal officials from accepting payments and gifts from foreign governments. The lawsuit, first reported by the Washington Post, will argue that Trump has broken the rule by failing to “[take] adequate steps to separate himself from his business interests,” particularly the Trump International Hotel in D.C. Representatives of Saudi Arabia, Turkey, and Kuwait have all patronized the hotel since Trump’s inauguration, and diplomats from elsewhere clearly believe that there are benefits to staying there during visits to Washington. While Trump did once promise to donate any profits his hotels made from foreign governments to the U.S. Treasury, he appears to have backed out of that pledge.

Trump has reportedly put off a state visit to the U.K. out of concern there would be widespread protestshttps://t.co/QppH3x5ILY

President Trump has told British Prime Minister Theresa May in a phone call “he does not want to go ahead with a state visit to Britain until the British public supports him coming,” The Guardian reports.

“The US president said he did not want to come if there were large-scale protests and his remarks in effect put the visit on hold for some time. The call was made in recent weeks, according to a Downing Street adviser who was in the room. The statement surprised May, according to those present.”

Byron York: “How many times have you heard a Democrat or Trump critic say that the Russia investigation is ‘just getting started’ or that they are determined to ‘get to the bottom’ of it? With a new prosecutor starting an open-ended investigation, they’re hoping for years of happy hunting.”

“But the fact is, Democrats do not need any more information than what is already publicly known to pursue impeachment proceedings against the president. What they need is 218 votes in the House of Representatives. If they had majority control of the House now, they would already be pursuing impeachment.”

Former US Attorney Preet Bharara to @ThisWeekABC: "There's absolutely evidence to begin a case" for obstruction of justice against Trump. pic.twitter.com/vLbGe2kyix

The Washington Post with the latest on the money race in the Georgia 6th: “It is an arms race of money and organization. The latest fundraising report, filed Thursday, showed Ossoff raising an additional $15 million in the past two months, nearly quadruple what Handel brought in. With outside groups weighing in, the race has thus far cost more than $40 million — far outpacing the previous record for a congressional race of nearly $30 million for a Florida contest in 2012.”

“Polls indicate there are few voters still undecided. ‘The next 10 days are about turning out the base. There are more of us than them in the district. The more people who vote, the better,’ said Corry Bliss, who heads the Congressional Leadership Fund, a super PAC affiliated with House Speaker Paul D. Ryan (R-WI). That organization alone plans to spend about $7 million in the race.”

Politico: “Halfway through Britain’s seven-week snap election campaign, some in Theresa May’s team came to the conclusion that they had a problem — the candidate. At a gathering of senior staff in Conservative campaign headquarters in central London, one of May’s top operatives told the sitting prime minister that she risked crashing and burning like Sarah Palin did in 2008… To the operative, May was overly controlling and her inexperience would tell during a short, intense campaign. May listened with good grace but changed nothing.”

Max Boot: “That Donald Trump and his defenders are breathing a sigh of relief after former FBI Director James Comey’s blockbuster Senate testimony shows how low the bar has been set for the president. Sure, he lied and behaved unethically — but, hey, at least he’s not personally under investigation for colluding with Russia to alter the 2016 election. Trump claimed ‘total and complete vindication.’”

“What total and complete chutzpah. Not only is Comey’s testimony damning on its own, but the situation is far worse for the president than the testimony, taken in isolation, would suggest. What Comey said, in his calm, just-the-facts-ma’am manner, is only one piece of the Kremlingate jigsaw puzzle. You have to look at it in totality to see how damning the whole picture actually is. There’s a good reason why Sen. John McCain recently said this scandal is reaching ‘Watergate size and scale.’ There are three parts of this puzzle: collusion, quid pro quo, and cover-up.”

Paul Rosenzweig says the worse news for Trump last week was not Jim Comey’s testimony: “Rather, it must be the late Friday news that Robert Mueller has hired Michael Dreeben, on a part-time basis, to help with his investigation. Dreeben, a deputy in the Office of the Solicitor General, has argued more than 100 cases before the Supreme Court. His specialty has, for the last 20 years, been criminal matters and he has an encyclopedic knowledge of criminal law. I once saw him argue a Supreme Court matter without a single note.”

“In short, he is quite possibly the best criminal appellate lawyer in America (at least on the government’s side).  That Mueller has sought his assistance attests both to the seriousness of his effort and the depth of the intellectual bench he is building.”

Attorney General Jeff Sessions said that he will testify in front of the Senate Intelligence Committee on Tuesday, amid questions over his role in a series of interactions between former FBI Director James Comey and President Trump, the Washington Post reports.  Sessions is expected to get questions about his involvement in the firing of Comey and the news that he offered his resignation to President Trump at one point recently.  It was not clear if the hearing would be open to the public or behind closed doors.

.@LindseyGrahamSC: “frustrating" Trump may be 1st president to “go down" because he can't stop inappropriately talking about investigation. pic.twitter.com/dROhiUZQbO

President Trump “has set a deadline of July 4 for a shakeup of the White House that could include removing Reince Priebus as his chief of staff,” Politico reports.  “While Trump has set deadlines for staff changes before, only to let them pass without pulling the trigger, the president is under more scrutiny than ever regarding the sprawling Russia investigation, which is intensifying the pressure on his White House team.”

This is quite a smart, conservative take on Trump and Russiagate from Stephen Kotkin at the @HooverInst: https://t.co/brKSxnhkDm

Sen. John McCain (R-AZ) said that U.S. leadership was better under President Barack Obama than his successor, President Trump, The Guardian reports.  McCain was responding to a question asking if America’s stance on the global stage was better during the Obama administration: “As far as American leadership is concerned, yes.”

Mike Allen: “The spotlight has been on President Trump’s legal jeopardy. But inside the small circle of top Republicans who advise this White House, there’s increasing concern that future political problems are stacking up.”

Said one trusted political hand: “Simply put, Trump has lost control of his presidency. He still has all the power of the office, but for someone who spent a portion of his life in real estate litigation, he shows once again he has not learned the first rule of legal combat: It is often better to say nothing and do nothing.”

“What Republicans fear: a downward spiral in which the Russia distractions make it harder to pass Trump’s agenda, new talent won’t come into the West Wing, top-shelf potential challengers are reluctant to run as Republicans in 2018, the House flips, and article of impeachment become a real risk.”