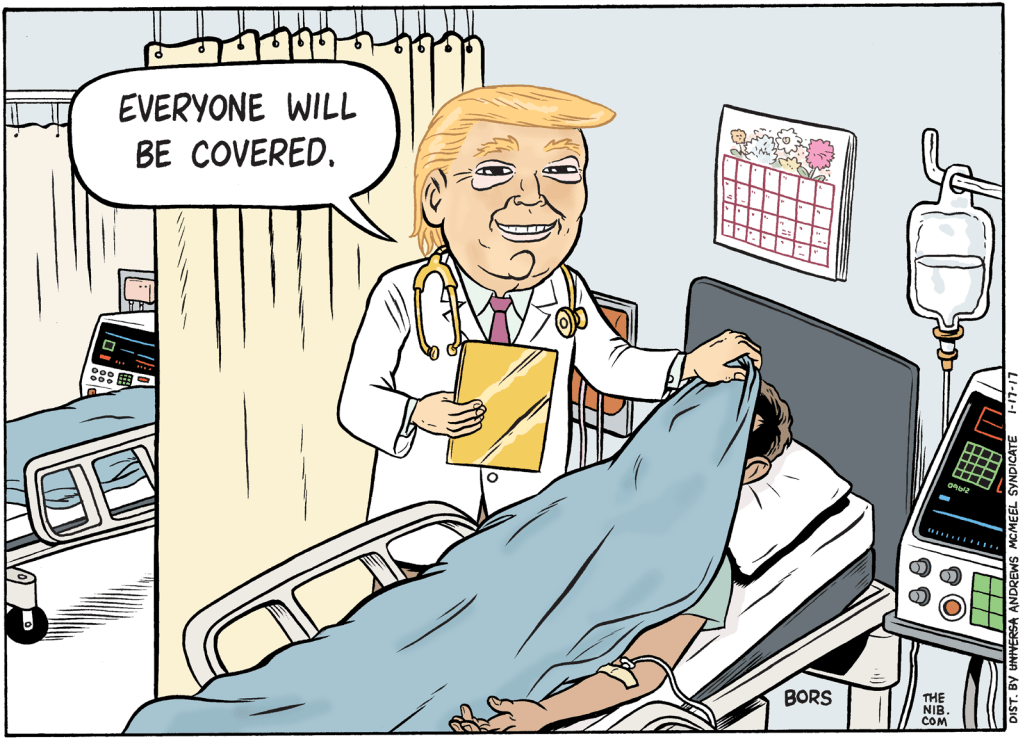 “Conservative senators and allied outside groups are on the verge of rebellion against the Senate’s Obamacare repeal effort, potentially derailing delicate negotiations to overhaul the nation’s health care system,” Politico reports.

“As Obamacare repeal talks enter crunch time with a vote as soon as this month, the Senate bill continues to tilt toward more moderate members of the GOP on keeping some of Obamacare’s regulatory structure and providing a more generous wind-down of the law’s Medicaid expansion. The movement has made Republicans increasingly pessimistic that two critical conservative senators, Mike Lee of Utah and Rand Paul of Kentucky, will be able to vote for the GOP’s ultimate agreement on health care.”

Meanwhile,the Wall Street Journal reports that Republicans aim to remove federal funding for Planned Parenthood in their bill, “creating another potential concern for centrist GOP senators considering whether to back the legislation.”

Jonathan Chait: “Republicans have a very different belief. They have no confidence the public will like what the law does when they see it. Instead they believe the opposite, which they have confessed with shocking bluntness. ‘I don’t think this gets better over time,’ said Republican Missouri senator Roy Blunt, a member of leadership. ‘This is not like fine wine, it doesn’t get better with age,’ admits Lindsey Graham.”

“The Republicans have spent eight years insisting that they could produce a better health-care-reform plan if they had the chance. They have come to realize that this promise was false. The only thing they can do is rip away the benefits Obamacare has given millions of Americans. Their sole objective now is to do so with the minimum level of transparency or accountability.”

Washington Post: “Comey has conceded to Congress that he told a friend to give a reporter information about his recollection of the president’s request that he shut down the bureau’s probe into former national security adviser Michael Flynn. But that does not make Comey a criminal, legal analysts said.”

“Prosecutors who bring charges against people for sharing information with the public can do so only when classified or other national security material is at issue. Material cannot be classified to conceal legal violations or prevent embarrassment, according to an executive order from President Barack Obama. Telling a reporter nonclassified information of public interest is not only legal, but it’s often the right thing to do.”

Politico: “Comey’s disclosures may have violated bureau policies, and could lead to him being rebuked by the FBI or Justice Department. But agencies have little other recourse against former employees in these circumstances, legal experts said.”

Jeff Greenfield: “Everything we have seen in these first 140 days—the splintering of the Western alliance, the grifter’s ethics he and his family embody, the breathtaking ignorance of history, geopolitics and government, the jaw-dropping egomania, the sheer incompetence and contempt for democratic norms—was on full display from the moment his campaign began. And that’s not just what Democrats think—it’s what many prominent Republicans have said all along.”

“So this may be a good time to remember that in a key sense, Trump happened because a well-established, real-life mechanism that was in the best position to prevent a Trump presidency failed. That institution was the Republican Party.”

“But either by cluelessness or willful design, the Republican Party had put itself in a position where one of the most significant functions of a party—the ‘vetting’ of its prospective nominee—was rendered impotent.”

Trump nominating judges at 3x rate of Obama at this point in 1st term- 1 reason why GOP isn't throwing him over yet https://t.co/XpvML4gAAF

Playbook: “Kellyanne Conway was overheard talking about her West Wing co-workers to fellow revelers at a party. Conway was having an off-the-record conversation with a group of reporters and other attendees at the British Embassy at their election-night watch party.”

She said President Trump told her to “go out there and say ‘Jim Comey is going to have to wait and see about the tapes.’”

“Conway also mimicked Reince Priebus urging White House aides to stop leaking, and wondered aloud what Marc Short — the legislative director — does all day. She also said she is ‘the one catching the slings and arrows in the West Wing.’ The source who heard Conway created a Twitter account about the evening, naming it @kellyanneleaks and posting photos and tweets from the event. Two other sources confirmed Conway’s remarks.”

My foreign policy blob friends, let's stop pretending this can be fixed. The post-US era has arrived. Me in @NYMag https://t.co/wLoe0NwncK

Dave Weigel reports on a “resolution” of the incident in which congressman-elect Greg Gianforte assaulted Guardian reporter Ben Jacobs. The outcome is an apology by Gianforte coupled with a donation of $50K to the Committee to Protect Journalists, “part of an agreement that settles any potential civil claims.” Weigel adds that “Gianforte is still facing criminal misdemeanor charges in Gallatin County, Mont.” Even still, I have to wonder if Gianforte is getting off pretty easy and if the agreement will encourage more violence against journalists.  Gianforte is a millionaire.  Any penalty or settlement will have to hurt for him to learn anything.  So I would have demanded 5 million.

If the GOP intends to raise the debt limit, Democrats should seek its outright abolition in exchange for their votes https://t.co/9Kh7fyqAdc pic.twitter.com/BNCZgPxsPn

New York Times: “What started out as a counterintelligence investigation to guard the United States against a hostile foreign power has morphed into a political scandal about what Mr. Trump did, what he said and what he meant by it. Lawmakers have focused mainly on the gripping conflict between the president and the FBI director he fired with cascading requests for documents, recordings and hearings.”

“But from the headquarters of the National Security Agency to state capitals that have discovered that the Russians were inside their voter-registration systems, the worry is that attention will be diverted from figuring out how Russia disrupted American democracy last year and how to prevent it from happening again. Russian hackers did not just breach Democratic email accounts; according to Mr. Comey, they orchestrated a ‘massive effort’ targeting hundreds of — and possibly more than 1,000 — American government and private organizations since 2015.”

A new study of police in Oakland, California, demonstrates what systemic racism looks like. It might be invisible if you examine it one interaction at a time, but Stanford University researchers used body-cam footage to demonstrate that police used more respectful language toward white people than black people during traffic stops.

An analysis of 981 traffic stops made by 245 Oakland officers in April 2014 found that officers were more apt to use terms of respect such as “sir,” “ma’am,” “please” and “thank you” when dealing with white motorists when compared to black ones. They apologized to white people more frequently for having to stop them, and expressed concern, telling them to “drive safe.”

After stopping black people, officers more often used terms deemed to be disrespectful, calling them by their first names, “bro” or “my man,” and instructing them to keep their hands on the wheel, the study found. […]

Adam Taylor at the Washington Post on the UK election winner, Jeremy Corbyn:

Corbyn was not your standard opposition leader. He looked scruffy and cut a demure figure during early appearances in Britain’s rowdy parliamentary debates. For much of his leadership, Labour’s poll numbers suggested a historic defeat was in the cards. But when he began campaigning, something changed.

Corbyn’s relaxed style was simply a relief compared with May’s teeth-grinding anxiety, and his experience at protests proved valuable practice for his appearances at Labour rallies around the country. More than anything, he appears to have been able to tap into the anxiety of Britain’s young and urban voters, many of whom felt alienated by Brexit and years of Conservative-lead austerity policies. As Labour’s numbers went up, even Corbyn’s detractors began to offer their begrudging approval.

CNN on the Trump-Obama relationship, or lack thereof:

“Republicans close to Trump say Obama’s active schedule with foreign leaders has caught the President’s eye as he works to develop his own relationships with world leaders. But they stopped short of saying Trump has expressed worry about Obama’s private conversations with foreign leaders.

“Even though President Trump may not like it, having Obama out there speaking with leaders, even if it’s critical of Trump, is probably helpful,” said Julian Zelizer, a presidential historian at Princeton. “He might be serving a diplomatic role that the administration itself is not fulfilling.”

It always takes a Democrat to clean up a Republican mess.