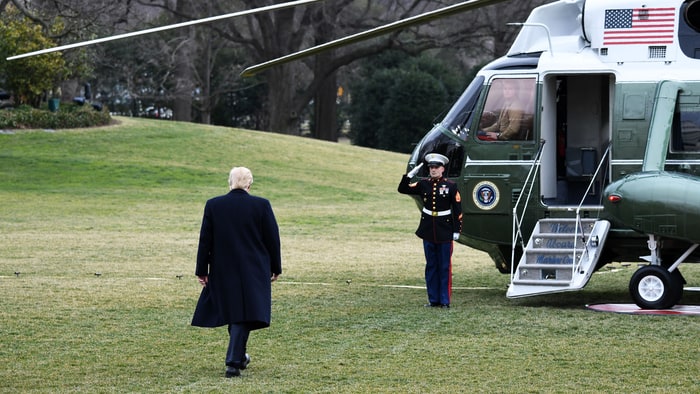 Fired FBI Director James Comey said President Trump told him at the White House “I need loyalty, I expect loyalty’’ in their private White House dinner conversation in January, according to written testimony prepared by Comey, the Washington Post reports.

“In written remarks submitted to the Senate Intelligence Committee on Wednesday — a day before his much-anticipated testimony — Comey said he remembered nine separate private conversations with President Trump. Three were in person and six on the phone.”

When the president made his comments about loyalty at the Jan. 27 dinner, Comey wrote that “I didn’t move, speak, or change my facial expression in any way during the awkward silence that followed. We simply looked at each other in silence. The conversation then moved on, but he returned to the subject near the end of our dinner.’’

More from one of Comey’s meetings with Trump, which is just one of the smoking guns showing obstruction of justice:

Here is the full statement.

Dan Coats, the nation’s top intelligence official, told associates in March that President Trump asked him if he could intervene with then-FBI Director James B. Comey to get the bureau to back off its focus on former national security adviser Michael Flynn in its Russia probe, the Washington Post reports.

“Trump asked everyone to leave the room except for Coats and CIA Director Mike Pompeo… The president then started complaining about the FBI investigation and Comey’s handling of it… After the encounter, Coats discussed the conversation with other officials and decided that intervening with Comey as Trump had suggested would be inappropriate.”

But then today, both Coats and Mike Rogers, “said in a hearing Wednesday they would not discuss specifics of private conversations with President Trump, declining to say whether they had been asked to push back against an FBI probe into possible coordination between his campaign and the Russian government,” the Washington Post reports.

“Testifying before the Senate Intelligence Committee, Director of National Intelligence Daniel Coats refused to say whether it was true… that Trump asked Coats if he could reach out to then-FBI Director James B. Comey and dissuade him from pursuing the Michael Flynn matter.”  Said Coats: “I don’t believe it’s appropriate for me to address that in a public session.”

A new ABC News-Washington Post poll finds 61% of Americans think President Trump fired FBI Director James Comey in order to protect himself rather than for the good of the country, and 56% think Trump is trying to interfere with official investigations of possible Russian influence in the 2016 election.

“A broad seven in 10 also doubt Trump’s word on the Russia issue.”

Rick Klein: “President Trump knows whom he’s wishing luck to — or, at least, he thinks he does. As Trump prepares for war with James Comey, the president looks like he’s going rogue – fuming at aides, clashing with his long-loyal attorney general, and tweeting statements that complicate foreign policy, his domestic agenda, and his administration’s own legal efforts. Except it’s always more complicated than that.”

“The thing that unites Trump’s actions – besides the near-universal desire inside his circle that he dial it back – is that he’s talking to his base. And in the case of Comey, that base is inclined to like what it hears from the president: The new ABC News/Washington Post poll finds that 70 percent of Republicans think Trump fired Comey ‘for the good of the country,’ rather than to protect himself. And 55 percent of Americans overall say they doubt Comey’s word – damage from a year where Democrats hated him long before Trump turned on him. Among Trump’s rawest political talents? Sizing up his opponents, and sensing their weaknesses.”

Nixon also veered between squelching investigation of associates and asking for the exonerating truth to be found: https://t.co/r8X019PAHe

“The legislation ends the ‘march to zero’ income tax cuts that Brownback heralded for much of his time as governor. Income taxes will rise across the board but most tax rates will remain lower than they were before the 2012 tax cuts. The increases are expected to generate more than $1.2 billion for the state over the next two years.”

First Read: “Talk about a political sea change — the conservative state of Kansas raising taxes! — which up-ends a central GOP orthodoxy that cutting is always good and raising them is always bad. If you were looking for the breaking point for Republicans on taxes, we found it in Kansas.”

“One by one this winter, then-FBI Director James B. Comey pulled aside three of the bureau’s top officials for private chats. In calm tones, he told each of them about a private Oval Office meeting with President Trump — during which, Comey alleged, the president pressed him to shut down the federal criminal investigation of Trump’s then-national security adviser, Michael Flynn,” according to Vox.

“Those three officials, according to two people with detailed, firsthand knowledge of the matter, were Jim Rybicki, Comey’s chief of staff and senior counselor; James Baker, the FBI’s general counsel; and Andrew McCabe, then the bureau’s deputy director… Comey spoke to them within two days of his Oval conversation with Trump, the sources said, and recounted the president’s comments about the Flynn investigation.”

Jonathan Chait: “The metaphor of the ticking impeachment clock presupposes some relationship between the evidence that comes to light and the behavior of Congress. There is little evidence that the two are linked. Or, at least, the link is so weak that there is hardly enough room for additional evidence to produce the necessary response in Congress. One a scale of zero to ten, with ten being a videotape of Trump speaking in Russian to his handlers from the Kremlin, like Kevin Costner in the last scene in No Way Out, we’re currently at about 7.5.”

“Trump repeatedly demanded loyalty from the FBI director, asked that he halt his investigation into the Russia scandal, instructed other intelligence officials to pressure him to end the investigation — the precise action that forced Richard Nixon to resign — and then fired Comey for refusing to do so. Many of his associates have been caught lying about their meetings and financial ties with Russia and what they said at those meetings. His son-in-law and close adviser tried to establish a secret line of communication to Russia. All of this took place after Trump appeared on camera during the campaign asking Russia to hack his opponent’s emails. (This is not even to mention the ongoing profiteering from his office that, in a normal presidency, would be an all-consuming mega-scandal in its own right.)”

“The vast majority of the Republican Party has absorbed these developments, a numbing procession of leaks and shocking news developments, with no diminished confidence in Trump whatsoever.”

Dana Millbank: “Trump shows no ability to correct course, to pull himself out of a self-destructive spiral. It may be premature to talk of impeachment or resignation, but Trump’s path is unsustainable. Republicans in Congress would be sensible to start thinking about an endgame, and the former Indiana governor may be the their best hope — and all of ours.”

“Many liberals correctly call Pence a doctrinaire conservative, particularly on gay rights and other social issues. He’ll be forever tarnished because of his role in legitimizing Trump for mainstream conservatives, a calculation based on the vain hope that he could influence Trump. He has embarrassed himself in office by parroting Trump’s untruths and cheerleading for the boss.”

“But Pence is, at core, a small-d democrat, not a demagogue. The world would be safer with him in charge. We would still have fierce divisions about the nation’s direction. But Pence, in the nearly two decades I’ve known him, has been an honorable man. Opponents can disagree with him yet sleep well knowing he’s unlikely to be irrational.”

Jesse Berney at the Rolling Stone says it is time for the President to resign: “There is only one sensible reaction to Trump’s antics: for members of Congress and influential conservatives to demand he resign.

You and I both know he’s not leaving the White House willingly, or at least not anytime soon. But this is no longer anything approaching a close call. The things the president says and writes, in public, are more than enough evidence to declare him grossly unfit for a job as a tollbooth operator, let alone as the most powerful person in the world.

Many of the Republicans defending him in Congress and on TV see his tweets and know he’s crossed the line. They’ll keep defending him; they’re too afraid of primary elections in their own districts to take a strong line against Trump.

But they should reconsider. Whatever is causing Trump to unravel, it’s putting the rest of us in serious danger. The continued spectacle of the Russia investigation is only fueling his descent. Why wait for it to unfold further? The best-case scenario is dragging the nation through a prolonged impeachment ordeal. If not, we have to wait until 2021 to replace him with a responsible and decent human being – assuming he doesn’t get us all killed by then.

There’s a better way. Start the discussion now. Call on Trump to step down. Hell, if you’re a Republican, you end up with President Mike Pence, and you probably love Mike Pence. I can’t stand the guy, but at least he won’t start World War III with an ill-advised 4 a.m. tweet.”

And more from that debate:

Wow, @handel says her sister has a preexisting condition, yet she still LIES about the bill. @ossoff calls her out anyway. #GA06 pic.twitter.com/5d6COUGZjo

One possibility: “Trump has decided to publicly humiliate Sessions — leaving him hanging out unsupported for a while — as he did to Bannon and others when he was down on them.”

POTUS has roughly 1,100 top-tier positions to fill across his administration. So far, he's nominated 111 of them. https://t.co/4KVHqGHWmP

Sixty percent of the country’s voters think Trump did something either “illegal” or “unethical” with regard to Russia, while a majority believes him to be a dishonest, poor leader who does not care for the average American. Conducted from May 31 to June 6, the poll caught up with voters just as Trump spiked the Paris climate agreement. So naturally, pollsters asked about climate change. Sixty-two percent of respondents said Trump’s decision to withdraw from the agreement was a mistake, with 78 percent saying they are “very concerned” or “somewhat concerned” about climate change.

“There is zero good news for President Donald Trump in this survey, just a continual slide into a chasm of doubt about his policies and his very fitness to serve,” Tim Malloy, assistant director of the Quinnipiac University Poll, said in a press release.

"It’s not a direct quote from Hitler, but it’s perilously close." https://t.co/kfW2YYyVDq

Hard to be sympathetic to people directly voting against their own interests & proudly standing by that decision https://t.co/QmFVWMKsuN