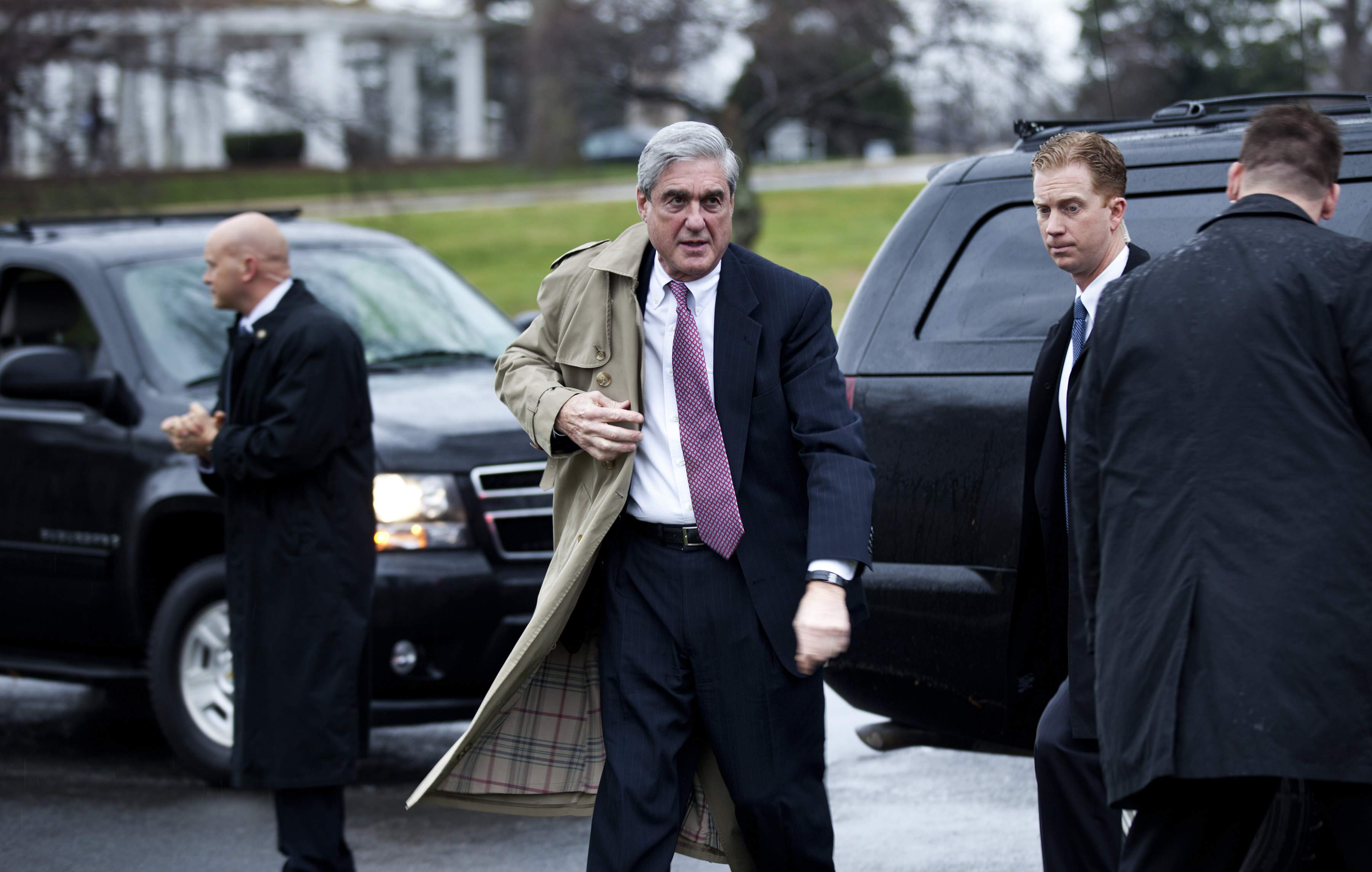 Mueller is on the move.  Special counsel Robert Mueller “is expanding his probe to assume control of a grand jury investigation into former national security adviser Michael Flynn,” three sources told Reuters.  “The move means Mueller’s politically charged inquiry will now look into Flynn’s paid work as a lobbyist for a Turkish businessman in 2016, in addition to contacts between Russian officials and Flynn and other Trump associates during and after the Nov. 8 presidential election.”

The AP is reporting that Mueller is taking over a separate criminal probe involving former Trump campaign chairman Paul Manafort, and may expand his inquiry to investigate the roles of the attorney general and deputy attorney general in the firing of FBI Director James Comey.

“The Justice Department’s criminal investigation into Manafort, who was forced to resign as Trump campaign chairman in August amid questions over his business dealings years ago in Ukraine, predated the 2016 election and the counterintelligence probe that in July began investigating possible collusion between Moscow and associates of Trump.

The move to consolidate the matters, involving allegations of kleptocracy of Ukrainian government funds, indicates that Special Counsel Robert Mueller is assuming a broad mandate in his new role running the sensational investigation. […] In an interview separately Friday with the AP, Deputy Attorney General Rod Rosenstein acknowledged that Mueller could expand his inquiry to include Attorney General Jeff Sessions‘ and Rosenstein’s own roles in the decision to fire Comey, who was investigating the Trump campaign. Rosenstein, who appointed Mueller as special counsel to take over the investigation, wrote the memorandum intended to justify Trump’s decision to fire Comey. Sessions met with Trump and Rosenstein to discuss Trump’s decision to fire him despite Sessions’ pledge not to become involved in the Russia case.”

Sen. Richard Burr (R-NC) said that the Senate “probably won’t reach a deal to repeal and replace the Affordable Care Act when it returns from a recess next week, in a stark assessment of the party’s health-care prospects,” the Wall Street Journal reports.

Said Burr: “It’s unlikely that we will get a health-care deal.”

He added that the House-passed GOP health plan was “dead on arrival,” and that “I don’t see a comprehensive health-care plan this year.”

“Three sources described the process as chaotic and said that in one interview, Trump spoke mostly about himself and seemed distracted.”

The New York Times reports: “Perhaps worried that, as the investigations make headway, evidence will come to light that the Russian state or at least Russians were clearly involved in the hacking, Mr. Putin appeared to be setting up a pre-emptive line of defense, as the Kremlin did when it became difficult to simply deny initially secret Russian deployments to Ukraine in 2014, and to Syria in late 2015.  Swamped by evidence of Russian military involvement in Ukraine and then Syria, the Kremlin retreated from categorical denials to claims that Russians fighting in eastern Ukraine were Russian “vacationers” and that burly Russians who appeared in Syria were humanitarian aid workers. It later acknowledged that the supposed aid workers were Russian soldiers.”

This is a fascinating line of defense because it recognizes that the Russian hackers probably left evidence behind. If confirmed by investigators, it will become an even bigger political problem for President Trump.

this story implies that Trump withdrew from Paris accords b/c of the Macron handshake humiliation. https://t.co/xmxrPp0LvE

The Washington Post on how Jared Kushner built a luxury skyscraper with low-cost loans: “They worked with state officials in New Jersey to come up with a map that defined the area around 65 Bay Street as a swath of land that stretched nearly four miles and included some of the city’s poorest and most crime-ridden neighborhoods. At the same time, they excluded some wealthy neighborhoods only blocks away.”

“The tactic — critics liken it to the gerrymandering of legislative districts — made it appear that the luxury tower was in an area with extraordinarily high unemployment, allowing Kushner Companies and its partners to get $50 million in low-cost financing through the EB-5 visa program.”

First Read: “[W]ith that decision to withdraw [from the Paris Climate Accords], it’s hard not to conclude that the guiding philosophy of Trump’s first four months in office has been to rollback Barack Obama’s agenda — or do what Obama refused to do.”

“Yes, Trump campaigned on many of these positions (although the military action in Syria contradicted what he had said in the past on the issue). And yes, all new presidents who hail from a different political party typically break — in one way or another — from their predecessors. But what’s different about Trump’s breaks with Obama is that he really hasn’t outlined a better way forward… These anti-Obama actions have been mostly symbolic. But what’s been missing is a clear alternative — other than just going back to where things were before 2009.”

This is the kind of abuse of power that longtime oversight hawks like @ChuckGrassley should be speaking out against. https://t.co/RB0LH4AmiV

New York Times: “Putting the highly anticipated hearing on the calendar would force Mr. Trump to decide whether to invoke executive privilege and try to prevent Mr. Comey from testifying. Mr. Comey is expected to be asked about several conversations he had with the president, including one in which he says Mr. Trump encouraged him to stop investigating his former national security adviser, Michael Flynn.”

“Courts have recognized a president’s constitutional right to keep his discussions a secret in most instances. A White House spokeswoman had no comment on whether Mr. Trump planned to try to block Mr. Comey’s testimony. It is a delicate decision with political and legal consequences.”

“In the six months since the election, we’ve obsessed about Obama-Trump voters but completely ignored their inverse: the Romney-Clinton voters,” Politico reports.

“Who are they? Romney-Clinton voters are, generally speaking, college-educated suburban professionals: lawyers, doctors and businesspeople. They voted for Mitt Romney in 2012, but switched to Hillary Clinton in 2016. They abhor xenophobia, the alt-right and racists, but they also mostly socialize within their own race and they’re mostly white. They’re socially liberal but not obsessed with a political agenda. They value fiscal responsibility but also believe in investing in the future, especially education. They remain deeply worried about Trump’s qualifications, scared about his temperament and alienated by his misogyny and ties to extremists. For the first time in a long time, they’re willing to hear about and vote for Democrats.”

“This poses deep risks for Republicans because these voters have long been a key cohort of the GOP’s electoral coalition. Studies show that upper-income and highly educated Americans are substantially more likely to cast ballots, potentially posing a decisive factor in the upcoming midterm elections. And it just so happens that the Romney-Clinton vote centered in areas of the country that are turning bluer—mainly places with large suburban populations and strong economies—where major congressional, senatorial and gubernatorial races will be held in 2017 and 2018.”

This @DavidCornDC analysis may feel like a trip down memory lane. But that's the point. We've known all along. https://t.co/6JS682NrOv

Michael Grunwald: “Donald Trump’s decision to withdraw from the Paris climate agreement was not really about the climate. And despite his overheated rhetoric about the ‘tremendous’ and ‘draconian’ burdens the deal would impose on the U.S. economy, Trump’s decision wasn’t really about that, either. America’s commitments under the Paris deal, like those of the other 194 cooperating nations, were voluntary. So those burdens were imaginary.”

“No, Trump’s abrupt withdrawal from this carefully crafted multilateral compromise was a diplomatic and political slap: it was about extending a middle finger to the world, while reminding his base that he shares its resentments of fancy-pants elites and smarty-pants scientists and tree-hugging squishes who look down on real Americans who drill for oil and dig for coal. He was thrusting the United States into the role of global renegade, rejecting not only the scientific consensus about climate but the international consensus for action, joining only Syria and Nicaragua (which wanted an even greener deal) in refusing to help the community of nations address a planetary problem.”

“Congress doesn’t seem willing to pay for Trump’s border wall—and Mexico certainly isn’t—so rejecting the Paris deal was an easier way to express his Fortress America themes without having to pass legislation.”

And Corbyn has a more agreeable personality.

Charlie Cook: “Polls show Pres­id­ent Trump’s ap­prov­al num­bers lan­guish­ing around 40 per­cent, while the an­ger and in­tens­ity of the Demo­crat­ic base is rising and the Re­pub­lic­an base re­mains pretty com­pla­cent, not full of fight as it was dur­ing the Obama years.”

Charlie is saying this as a warning to the Dems, but going insane was enormously and politically successful strategy for the GOP during the Obama era.  They won the House in 2010 and full control of all state houses, the Senate in 2014, and the White House in 2016.   A cautionary tale needs some bad consequence.   There is none here.

Matt Bai: “But really, all this focus on Trump’s tweets and the stories about his boorishness abroad should please the White House no end. The more the narrative focuses on Trump’s toughness and bluster with our allies, the less anyone focuses on what’s really been exposed in these opening months of his presidency.”

“Trump is weak, and our rivals have figured it out. They’re walking all over the American president in a way we haven’t seen since at least the days of disco and Space Invaders.”

“None of this seems to permeate the family circle of Trump’s White House, where, as ever, mythology crowds out any notion of policy or reality.”