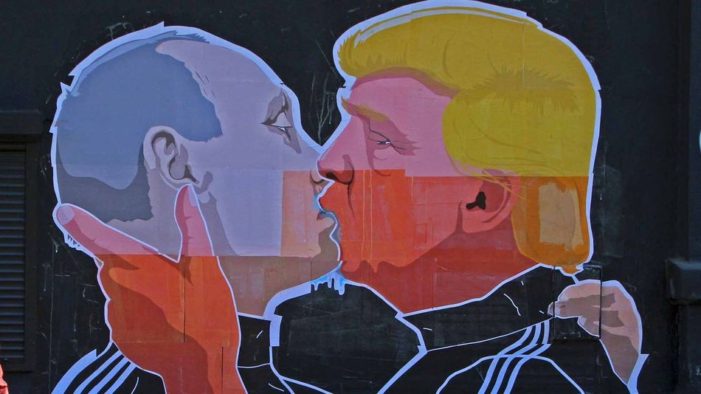 Sen. John McCain (R-AZ) told an Australian TV station that Russian president Vladimir Putin is a great threat to democracy than the Islamic State.   He is right.

Said McCain: “I think he is the premier and most important threat, more so than ISIS.”

He added that while ISIS “can do terrible things and I worry a lot about what is happening with the Muslim faith… but it’s the Russians who tried to destroy the fundamental of democracy and that is to change the outcome of an American election.”

Sigh, and then McCain has to go worrying about the Muslim faith, which has nothing more to do with ISIS than the Christian faith has with the KKK.

No, Donald Trump, your trip to Europe was not a success. https://t.co/VQRfLaKP8L

Walter Shapiro: “Even under the benign theory that Kushner thought that a secret back channel was like a small boy’s tin-can telephone, his life in the coming months and maybe years will be a study in misery. He will probably spend more time with his personal lawyer, Clinton Justice Department veteran Jamie Gorelick, than with Ivanka or his children. Whether it is an appearance under oath on Capitol Hill or the inevitable FBI interview, every sentence Kushner utters will bring with it possible legal jeopardy.”

“Kushner may have once thought that he established his tough-guy credentials when he stared down angry creditors and impatient bankers over his ill-timed 2007 purchase of a $1.8bn Fifth Avenue office building. But the worst thing that can happen to an over-leveraged real-estate investor (as Trump himself knows well) is bankruptcy. When the FBI and special prosecutor Robert Mueller get involved, the penalties can theoretically involve steel bars locking behind you.”

If you check the party affiliation of someone who commits assaults before deciding how you feel about it, you're what's wrong with America.

Molly Ball: “Trump’s troubles have cast a long shadow over the 291 members of his party in the House and Senate, who see their agenda going up in smoke in what is generally a presidential party’s most productive year.”

“A flawed, unpopular health-care bill is stalled in the Senate, the president’s budget proposal has been dismissed out of hand, and hope is fading for other priorities such as tax reform and infrastructure. ‘How do you pack all that in?’ Senator John McCain asked last week, adding, ‘So far, I’ve seen no strategy for doing so. I’m seeing no plan for doing so.’ One Republican congressman suggested that what was needed was for the president to throw ‘a temper tantrum’ to get lawmakers to act—this congressman happened to be named Brat.”

“Meanwhile Democrats sit back and watch it burn, with no small amount of schadenfreude, and the Republicans who never liked Trump see their worst predictions fulfilled.”

CAN THE PRESIDENT BE INDICTED?: “The Constitution does not answer every question. It includes detailed instructions, for instance, about how Congress may remove a president who has committed serious offenses. But it does not say whether the president may be criminally prosecuted in the meantime,” the New York Times reports.

“The Supreme Court has never answered that question, either. It heard arguments on the issue in 1974 in a case in which it ordered President Richard M. Nixon to turn over tape recordings, but it did not resolve it.”

"So deeply insecure…not even becoming president of the United States quenched his need to make others feel small." https://t.co/0JRIs1ban3

David Nather: “President Trump is back on Twitter, and tonight he tweeted about an intriguing idea that’s disconnected from pretty much all of the current Republican health care plans: he wants to ‘add more dollars’ to health care.”  Said Trump: “I suggest that we add more dollars to Healthcare and make it the best anywhere. ObamaCare is dead – the Republicans will do much better!”

I need a reporter to strap Trump down to a chair and interrogate him on the AHCA.  I bet he knows nothing about the bill carrying his name.   Because Trumpcare doesn’t add more dollars to Healthcare and make it the best anywhere.  It cuts trillions from Healthcare.

Nice piece by @rubycramer about the kind of staffer you don't usually read about.https://t.co/6Krlk8ioie

As we commemorate Memorial Day, Samantha Layne’s “9 Ways Republicans Could Have Helped Veterans…But Decided Not To” at reverbpress.com provides good talking points. A couple of her examples: “H.R. 466, which was the Wounded Veteran Job Security Act was a bill designed to provide job security for vets receiving medical treatment for injuries sustained while serving our country. Employers would be forbidden from firing veteran employees who miss work due to treatment related to a service-related disability. The bill had 24 co-sponsors, 23 of which were Democrats. Sounds great, right? Blocked by the GOP…Then there was H.R. 1168, the Veterans Retraining Act. This bill was designed to provide financial assistance to unemployed vets while they retrain for the current job market. But, unfortunately, Republicans decided to not pass it. Sorry, vets, but be sure to stop by for a photo op where they can shake your hand and thank you for your service!”

This is Arlington. Not a rally. Just now. pic.twitter.com/Mz8CGJYUi0

Josh Marshall: There’s been a lot of discussion about just what Donald Trump must have said in private during his trip to Europe. Obviously, he was seen in a very negative light by European leaders already. But there does appear to have been a shift since the meetings in Brussels. The most visible sign was German Chancellor Merkel’s statement that Europe can no longer rely on the United States. […] I suspect in meeting as a group, over a more extended period and in a context specifically focused on Europe and NATO there was a further realization that what they are watching from across the Atlantic is no act. Indeed, Trump appears more impulsive and erratic in person than on TV. Rather than growing into the job he’s growing into the role of aggressor.

Another, perhaps more critical realization, is suggested in this Twitter thread by Max Fisher of the Times: That is, it’s not just that Trump is greedy or impulsive or unreliable, indifferent to the North Atlantic alliance but that he is positively against it. He and Vladimir Putin are in a de facto alliance against ‘Europe’ or to put it less geographically, the liberal internationalist state system which has rested on and built out from the United States and Western Europe. In this respect, we don’t need to concern ourselves with election tampering or ‘collusion’ or just what’s behind the relationship between the two men. The relevant issue is that they appear to be operating with common goals.  […]

Paul Waldman makes a salient point about the power of “a new clarity” on policy benefitting Democrats:  “For instance, The Affordable Care Act is an uncharismatic policy that is meant to solve an intricate, interlocking series of problems in the American health-care system. But you know what is a charismatic policy? Single-payer health care. It’s easy to understand, and it promises terrific benefits. And right now, there’s an argument brewing between leftists who want the party to stand firmly for single-payer, and liberals who support it in principle but worry about the political and practical difficulties of getting there. To those liberals, the leftists respond: “We need to aim high, speak in broad strokes and not get bogged down by self-imposed constraints about the possible…What we can say is that there will almost certainly be other issues on which Democrats will discard their previous “It’s complicated” position for ones that take a firm, clear stance and leave the compromises and complications until after the election.”

“Macron had invited the Russian leader to France to reset a relationship that has turned increasingly sour. Putin did more than any other foreign leader to undermine Macron’s legitimacy in this country’s recent presidential election, meeting with his far-right opponent during the campaign.”