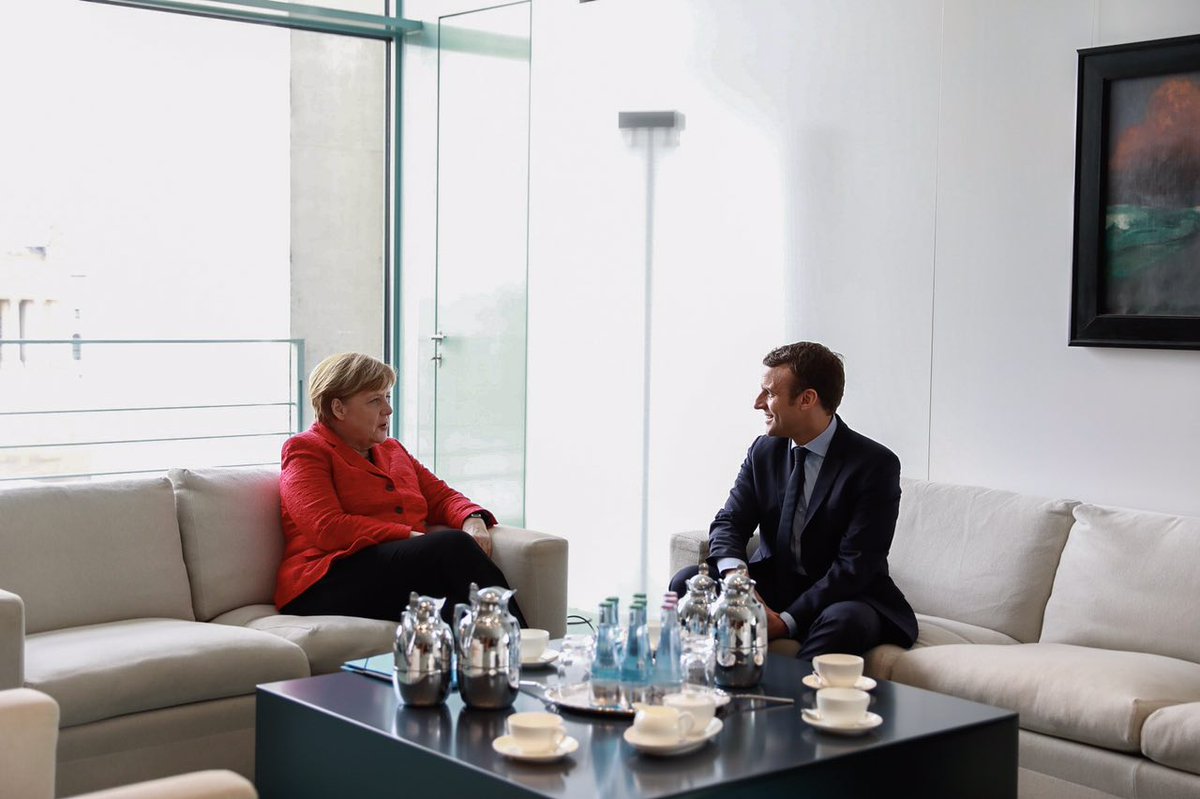 In the aftermath of a contentious Group of 7 meeting, where leaders failed to persuade President Trump to back the Paris climate accord, Chancellor Angela Merkel of Germany said that tried and tested global alliances were no longer as reliable as they once were, citing her experience “in recent days,” the New York Times reports.

“Ms. Merkel, who is campaigning for a fourth term in the September elections, did not name the country or leader she had in mind.”

“It seemed clear, however, that she was referring mainly to the United States and Mr. Trump, who refused to commit to the goals of the 195-nation climate agreement hammered out in 2015. He has said it would be bad for the United States economy.”

Since 1945, the supreme strategic goal in Europe of the USSR and then Russia was the severing of the US-German alliance. Trump delivered.

French president Emmanuel Macron said his now-famous white-knuckle handshake showdown with Donald Trump was “a moment of truth” designed to show that he’s no pushover, the Guardian reports.

Said Macron: “My handshake with him, it wasn’t innocent. One must show that you won’t make small concessions, even symbolic ones, but also not over-publicize things, either.”

“At their first meeting, ahead of a Nato summit in Brussels on Thursday, the two men locked hands for so long that knuckles started turning white. The French leader held the shake for a few seconds more. Both men’s jaws seemed to clench.”

“The Russian banker Trump son-in-law Jared Kushner met with in December is viewed by U.S. intelligence as a ‘Putin crony’ and a graduate of a ‘finishing school’ for spies who was often tasked with sensitive financial operations by Putin,” according to multiple U.S. officials and documents viewed by NBC News.

The New York Times notes that “in recent weeks the Trump-Kushner relationship, the most stable partnership in an often unstable West Wing, is showing unmistakable signs of strain.”

“That relationship had already begun to fray a bit following Mr. Trump’s dismissal of the F.B.I. director, James B. Comey, which Mr. Kushner had strongly advocated, and because of his repeated attempts to oust Stephen K. Bannon, Mr. Trump’s chief strategist, as well as the president’s overburdened communications team, especially Sean Spicer, the press secretary.”

“It has been duly noted in the White House that Mr. Trump, who feels that he has been ill served by his staff, has increasingly included Mr. Kushner when he dresses down aides and officials, a rarity earlier in his administration and during the campaign.”

The New York Times reports: “There are signs that [Kushner] is tiring of the nonstop combat and the damage to his reputation. He has told friends that he and his wife, Ivanka Trump, have made no long-term commitment to remain by Mr. Trump’s side, saying they would review every six months whether to return to private life in New York.”

Meanwhile, Jonathan Karl reported on This Week that people “very close to the president” think it’s time for Kushner to “take a step back” given his role in the Russian scandal: “Even if he is ultimately completed cleared, he is at the center of this investigation right now, and you hear people close to the president, quietly saying, is it too much and is it time for Jared to take a step back, maybe even take a leave of absence from the White House.”

President Trump “has been aggressively working the phones since returning this weekend from his foreign trip, talking to friends and outside lawyers as he obsesses over the deepening investigations into his aides and Russia,” Politico reports.

“Two White House officials said Trump and some aides including Steve Bannon are becoming increasingly convinced that they are victims of a conspiracy against Trump’s presidency, as evidenced by the number of leaks flowing out of government — that the crusade by the so-called ‘deep state’ is a legitimate threat, not just fodder for right wing defenders.”

Said one outside adviser: “The more people talk to him about it, the more he obsesses about it.”

Jay Rosen says Trump is not a master media manipulator: “Trump does not care if he is shown to be a liar, idiot, ignoramus, clown, or monster. Most people are not built like that. Therefore he can generate media attention without caring about the consequences. Most people are not built like that, either. Trump is exceptional, but this is different from saying he is a masterful. In fact, he’s a compulsive. Which is the opposite of mastery. Everything explained by attributing to Trump some genius for the media arts is better explained by his utter shamelessness, his malignant narcissism— and his indifference to being the clown figure.”

“When journalists testify to Trump’s genius as a mover of media they are bragging in a way they don’t quite realize. For they are implicitly saying: genius is required to manipulate us. Sorry, it’s not. Anyone in a position of power willing to float a false accusation can get you to cover it— and subvert your intention to cover something else. Anyone eager to make a spectacle of himself can create lurid headlines. Anyone smashing to bits norms of democratic governance will dominate the news agenda.”

Even in a climate of GOP-condoned anti-media violence, media can't or won't identify the source of political rot. https://t.co/NFkk2VPPJN

Andrew Sullivan on Trump the Pagan meeting the Pope: Trump is not an atheist, confident yet humble in the search for a God-free morality. He is not an agnostic, genuinely doubtful as to the meaning of existence but always open to revelation should it arrive. He is not even a wayward Christian, as he sometimes claims to be, beset by doubt and failing to live up to ideals he nonetheless holds. The ideals he holds are, in fact, the antithesis of Christianity — and his life proves it. He is neither religious nor irreligious. He is pre-religious. He is a pagan. He makes much more sense as a character in Game of Thrones, a medieval world bereft of the legacy of Jesus of Nazareth, than as a president of a modern, Western country.

He loves the exercise of domination, where Christianity practices subservience. He thrills to the use of force, while Jesus preached nonviolence, even in the face of overwhelming coercion. He is tribal, where Jesus was resolutely universal. He is a serial fantasist, whereas Jesus came to reveal the Truth. He is proud, where Jesus was humble. He lives off the attention of the crowd, whereas Jesus fled the throngs that followed him. He is unimaginably wealthy, while Jesus preached the virtue of extreme poverty. He despises the weak, whom Jesus always sided with. He lies to gain an advantage, while Jesus told the truth and was executed for it. He loathes the “other,” when Jesus’ radical embrace of the outsider lay at the heart of his teaching. He campaigns on fear, which Jesus repeatedly told us to abandon. He clings to his privileged bubble, while Jesus walked the streets, with nothing to his name. His only true loyalty is to his family, while Jesus abandoned his. He believes in torture, while Jesus endured it silently. He sees women as objects of possession and abuse, while Jesus — at odds with his time and place — saw women as fully equal, indeed as the first witnesses to the Resurrection. He is in love with power, while Jesus — possessed of greater power, his followers believe, than any other human being — chose to surrender all of it. If Trump were to issue his own set of beatitudes, they would have to be something like this:

The Obama WH worked to stop America from overreacting to terror attacks. The Trump WH would likely do the opposite: https://t.co/6TiyBDPlq5

Eric Levitz: “If voters give Democrats the House next year, Democrats will pass a $15 minimum wage out of the House within 100 hours of taking office, House Minority Leader Nancy Pelosi vowed on Thursday. Pelosi’s pledge came as Democratic leaders introduced the legislation she promised to pass: Thirty-five Democrats in the Senate and 152 in the House signed their names to the Raise the Wage Act, a bill that would fully phase in a $15-an-hour rate by 2024, and guarantee that minimum to all workers, including tipped ones.”

Anne Applebaum at The Washington Post writes—There is no one right way to react to terror. There is a wrong way:

There is no correct reaction to terrorism. The cruelty, fanaticism and madness of a man who explodes a powerful bomb in a crowd of young girls inspires all kinds of feelings: horror, anger, sadness, fear, revulsion. […]  But if those powerful emotions are politicized, or if they are used to fuel popular hysteria that will make the situation worse and not better, then they cease to be neutral or natural. The Manchester bombing was an act of extreme evil, and so it has inspired a number of British writers, politicians and celebrities to call for an extreme response.

One journalist demanded “internment of thousands of terror suspects now to protect our children.” An ex-politician called for the government to bring back the death penalty. […] Each one of those statements is both emotionally charged and practically pointless. The death penalty? Hard to see why it would deter a suicide bomber who wanted to die anyway. The “internment of thousands of terror suspects”? Britain tried to fight the Irish Republican Army that way, ordering a mass arrest of nearly 350 “terror suspects” in 1971. The result was catastrophic: Real damage was done to the credibility of the British state and the legal system in Northern Ireland, since many of those interned didn’t have IRA links. The mass arrest radicalized more people and led to a sharp increase in violence.