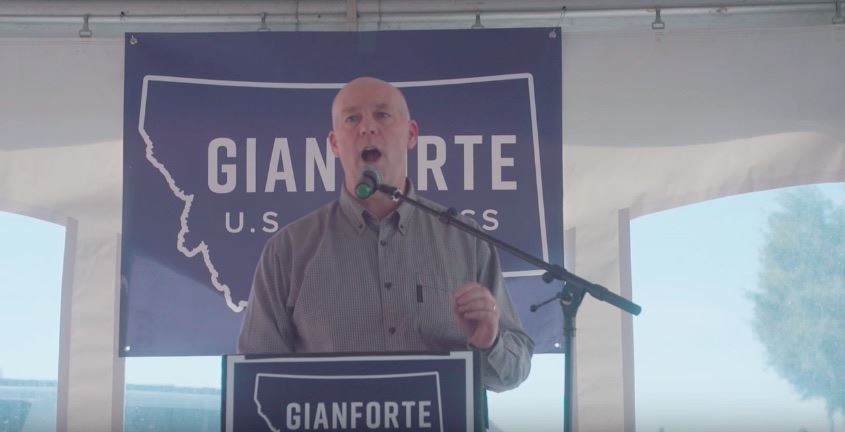 [UPDATE: Commenter Steve points out that technically, Gianforte has not been arrested yet to our knowledge. Which makes the situation worse for all Republicans as this means Gianforte is a current fugitive from justice and any Republican talking to him or meeting with him today is committing a crime. So there, I made the correction Steve.]

“The Republican candidate for Montana’s congressional seat slammed a Guardian reporter to the floor on the eve of the state’s special election, breaking his glasses and shouting, ‘Get the hell out of here,’” The Guardian reports.

“Ben Jacobs, a Guardian political reporter, was asking Greg Gianforte (R), a tech millionaire running for the seat vacated by Ryan Zinke, about the Republican healthcare plan when the candidate allegedly ‘body-slammed’ the reporter.”  Said Jacobs: “He took me to the ground. This is the strangest thing that has ever happened to me in reporting on politics.”

Here is audio of the incident:

Gianforte fled the scene in a staffer’s car with Washington State license plates.  His campaign then put out a statement that is an obvious lie given the recording above.   This false statement was then debunked by the Fox News crew who was in the room:

New: Fox News team says "Gianforte grabbed Jacobs by the neck with both hands and slammed him into the ground." https://t.co/u4Rq2yjC5o

Late last night or early this morning, Gianforte “was charged with assaulting a journalist on Wednesday at what was to be a final rally in Bozeman on the eve of the vote,” the New York Times reports.

“Three of the state’s largest newspapers, The Billings Gazette, The Missoulian and The Helena Independent Record, quickly rescinded their endorsements of Mr. Gianforte. But prospects that the altercation could tip the race to the Democrat, Rob Quist, were complicated by Montana’s early-voting tradition: Over half the estimated total ballots in the contest had been returned by Wednesday.”

He could still win, since it is Montana, and since there are some Trumpers who crave violence against all humans, yet alone reporters, who are, according to their President, the enemy of all the people.   But then again, Gianforte is not well liked in Montana, as he is correctly labeled a New Jersey Billionaire carpetbagger who lost to the incumbent Democratic Governor last year in the gubernatorial election while Trump was winning the state by 20.

So here is hoping that this will energize Democrats even more and may cause reluctant GOP voters to stay home.

If Gianforte does win, the House should refuse to seat him.