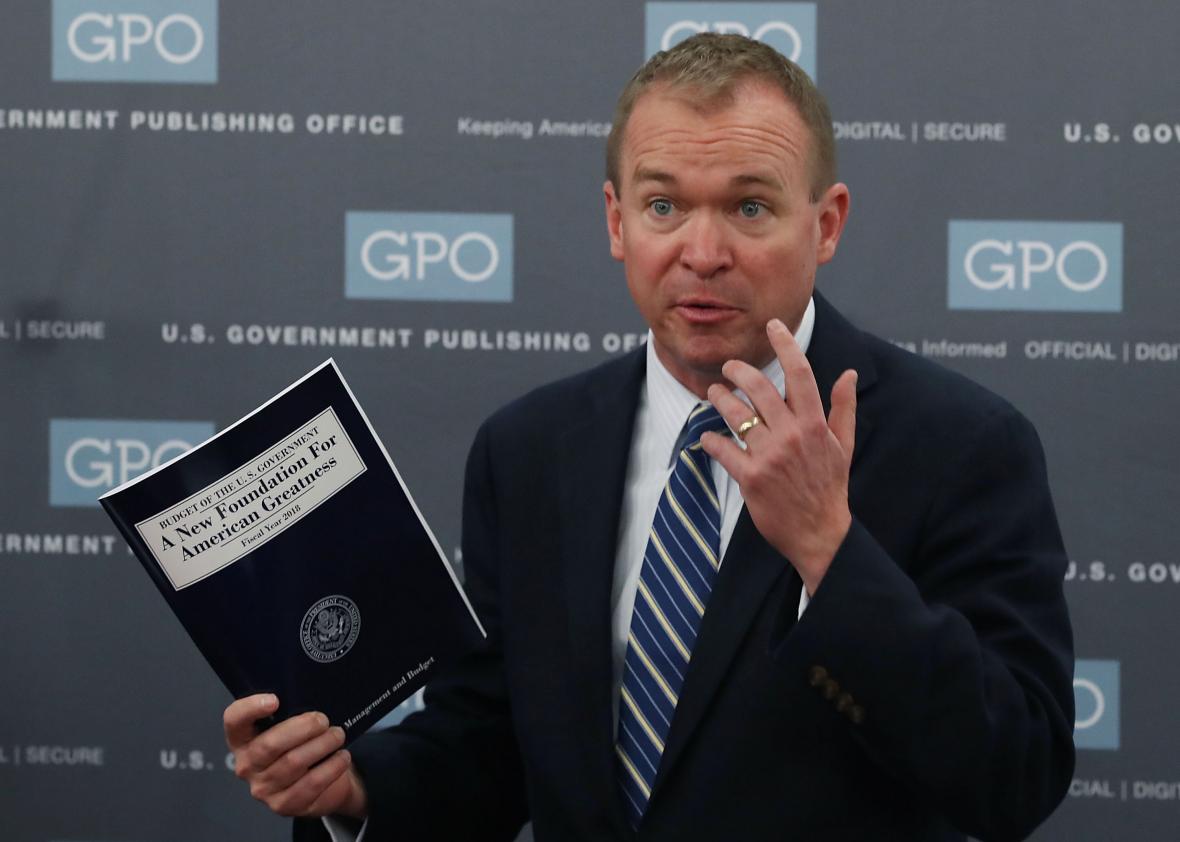 “Donald Trump, whose populist message and promises to help American workers propelled him to the White House, is set to issue a budget proposal on Tuesday that instead takes aim at the social safety net on which many of his supporters rely,” Politico reports.

“Rather than breaking with Washington precedent, Trump’s spending blueprint follows established conservative orthodoxy, cutting taxes on the wealthy, boosting defense spending and taking a hatchet to programs for the poor and disabled – potentially hurting many of the rural and low-income Americans that voted him into office.”

“The White House plan to trim the national debt includes selling off half of the nation’s emergency oil stockpile, part of a broad series of changes proposed by President Trump to the federal government’s role in energy markets,” Bloomberg reports.

“The proposal also seeks to boost government revenues by allowing oil drilling in the Alaska National Wildlife Refuge, ending the practice of sharing oil royalties with states along the Gulf of Mexico and selling off electricity transmission lines in the West. Like much of the budget, those moves are likely to face opposition in Congress.”

Larry Summers: “Details of President Trump’s first budget have now been released. Much can and will be said about the dire social consequences of what is in it and the ludicrously optimistic economic assumptions it embodies.  My observation is that there appears to be a logical error of the kind that would justify failing a student in an introductory economics course.”

“Apparently, the budget forecasts that U.S. economic growth will rise to 3.0 percent because of the administration’s policies — largely its tax cuts and perhaps also its regulatory policies.  Fair enough if you believe in tooth fairies and ludicrous supply-side economics.”

“Then the administration asserts that it will propose revenue neutral tax cuts with the revenue neutrality coming in part because the tax cuts stimulate growth! This is an elementary double count.  You can’t use the growth benefits of tax cuts once to justify an optimistic baseline and then again to claim that the tax cuts do not cost revenue. At least you cannot do so in a world of logic.”

Reminds me of Nixon trying to use CIA to quash FBI investigation into Watergate. Adds to obstruction charges. https://t.co/Ya7zd1Df4E

President Trump “asked two of the nation’s top intelligence officials in March to help him push back against an FBI investigation into possible coordination between his campaign and the Russian government,” the Washington Post reports.

“Trump made separate appeals to the director of national intelligence, Daniel Coats, and to Adm. Michael S. Rogers, the director of the National Security Agency, urging them to publicly deny the existence of any evidence of collusion during the 2016 election.”

“Coats and Rogers refused to comply with the requests, which they both deemed to be inappropriate.”

First Read: “The ground right now has certainly shifted on Capitol Hill. We are about to enter The Summer of Comey (congressional testimony, the possibility of more memos, and other developments). And Republicans have a political decision to make: Do they circle the wagons? Or do they run for the hills? It’s still very early, but it looks like Option #2 is much more realistic than it was a day ago.”

Tony Schwartz: “Three decades ago, I spent nearly a year hanging around Trump to write his first book, The Art of the Deal, and got to know him very well. I spent hundreds of hours listening to him, watching him in action and interviewing him about his life. To me, none of what he has said or done over the past four months as president comes as a surprise. The way he has behaved over the past two weeks — firing FBI Director James B. Comey, undercutting his own aides as they tried to explain the decision, disclosing sensitive information to Russian officials and railing about it all on Twitter — is also entirely predictable.”

“Early on, I recognized that Trump’s sense of self-worth is forever at risk. When he feels aggrieved, he reacts impulsively and defensively, constructing a self-justifying story that doesn’t depend on facts and always directs the blame to others.”

Before Trump asked spy chiefs to step on FBI, he planned to have a billionaire purge the intel community. Unrelated?https://t.co/tBlb7xI6Iq

Politico: “Suppose that for whatever reason Trump should cede the presidency to his vice president—say the president makes America great again ahead of schedule or alternatively decides he’s sick of the ‘witch hunts’ — one might ask what kind of world and what unique challenges a President Mike Pence would face. The answer is, quite simply, a multitude.”

“Indeed, with the possible exception of Gerald Ford, the able and experienced Pence would face the most difficult political and national security headwinds of any unelected commander-in-chief in America’s history. Of the nine men who have assumed the office unexpectedly, none has faced such a vicious political, media and cultural environment—an environment where even staunch Democrats like Dianne Feinstein are booed by supporters for not endorsing socialism and propelled by a frantic social media that turns every moment of the Trump presidency into The Wire meets Game of Thrones. In the face of these challenges, a President Pence would have to make a series of quick decisions that would set the tone for his administration, determine the prospects for his policy agenda and, not incidentally, decided his political future.”

This really is a must-read speech, with a clear-eyed view of our past as well as our present. https://t.co/wJtDZ1Xlr6

“Paul Ryan and the White House are barreling toward a tax reform show-down — a faceoff that’s becoming all but inevitable as the speaker continues selling a tax plan rejected by Trump officials,” Politico reports.  “At issue is a controversial pillar of the House GOP tax plan that effectively hikes taxes on imports.”

“The White House is looking to wall off the scandals threatening to overtake the president’s agenda by building a separate crisis management operation,” Politico reports.

“President Trump personally reached out to two of his former campaign aides – his first campaign manager, Corey Lewandowski, and his deputy campaign manager, David Bossie – to sound them out about working with the administration as crisis managers.”

My dive into vast, overlooked Kushnerville, where tenants are pursued in court for yrs, even when they're in right. https://t.co/XtgYUa0ICo

“The Senate intelligence committee says it will subpoena two of former national security adviser Michael Flynn’s businesses,” NBC News reports.  “The committee has already subpoenaed Flynn for documents regarding his contacts with Russian officials during the 2016 presidential campaign. Flynn has refused to hand over that information.”

“The committee also sent a letter to Flynn’s attorney Tuesday questioning the legal basis of Flynn’s decision to invoke his Fifth Amendment right over a request for documents rather than testimony.”

What's happening with the Russia scandal: it's becoming more about corruption, and getting closer to trump himself https://t.co/3w30JI5dd9 pic.twitter.com/dSIv2k8AMT

Said Corker: “It’s a very awkward process, at best. There are no experts. There’s no actuarials… Typically, in a hearing, you’d have people coming in and you’d also have the media opining about if a hearing took place, and X came in and made comments.”

“Corker’s frustrations come as Republicans continue to struggle with how, exactly, to repeal and replace the Affordable Care Act. The House barely passed its bill, which is going nowhere, earlier this month. Senate leaders delegated the task of drawing up a bill in that chamber to a group of 13 Republicans who have been quietly meeting. Corker said he went to one of their meetings to offer input because he’s worried they’re going to unveil a final bill that hasn’t been shaped by public hearings or media analyses.”

Paul Ryan’s agenda has been a much bigger liability for the GOP than Trump’s scandals https://t.co/sIlnLs8Moy

Former CIA director John Brennan said for first time that he became concerned last year that the Russian government was trying to influence members of the Trump campaign to act — wittingly or unwittingly — on Moscow’s behalf, the New York Times reports.

Said Brennan: “I encountered and am aware of information and intelligence that revealed contacts and interactions between Russian officials and U.S. persons involved in the Trump campaign that I was concerned about because of known Russian efforts to suborn such individuals. It raised questions in my mind about whether Russia was able to gain the cooperation of those individuals.”

Ben Smith: “Donald Trump has already changed the Democratic Party more than his own Republican Party. While the president has merely reduced his own party into a panicked mess, the Democrats’ trajectory seems to have moved subtly and decisively away from the center-left Clinton liberalism toward a politics whose planks make Barack Obama look like Al Gore.”

“I know, it’s been a distracting month. So you’re forgiven if you missed the big development on the Democratic Party policy front: the call for ‘a large-scale, permanent program of public employment and infrastructure investment.’ That plan, titled A Marshall Plan for America, came not from Bernie Sanders but from the Center for American Progress, the Clintonite Washington think tank John Podesta led. The proposal breaks in tone and substance with the Clinton–Obama focus on an economy led and dominated by the private sector.”

“The plan’s radicalism, CAP President Neera Tanden told me, is aimed at a jobs crisis that they’re talking about with an urgency that was absent from the Clinton campaign and the Obama administration.”