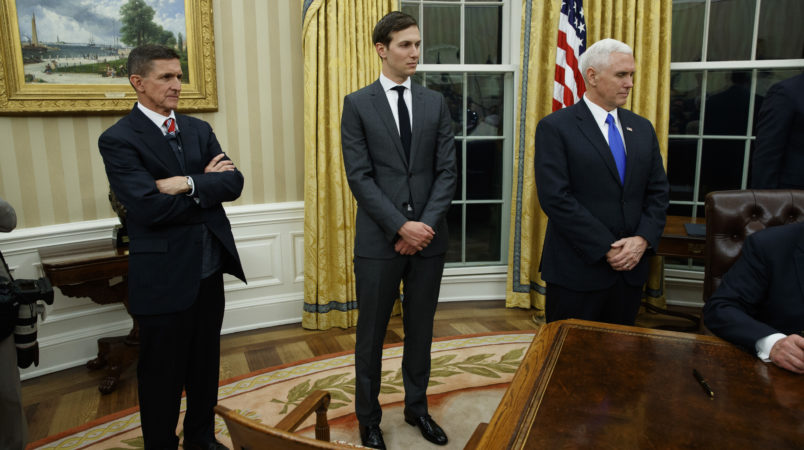 TRUMP’S REACTION TO HIS VERY OWN SPECIAL PROSECUTOR:  After initially taking a conciliatory tone, President Trump slammed the appointment of a special counsel to investigate any ties between his campaign and Russia as a “witch hunt.”  Tweeted Trump: “With all of the illegal acts that took place in the Clinton campaign & Obama Administration, there was never a special councel (sic) appointed!”  In another tweet, Trump called the probe into his campaign’s ties to Russia as the “single greatest witch hunt of a politician in American history.”

The New York Times on how Trump learned about it: “Mr. Trump, who was looking through papers, reacted calmly but defiantly at first, according to two people familiar with the events, saying he wanted to “fight back.” Realizing the seriousness of the situation, he quickly summoned his staff…”

“Most of those gathered recommended that the president adopt a conciliatory stance…  Mr. Kushner — who had urged Mr. Trump to fire James B. Comey, the F.B.I. director — was one of the few dissenting voices, urging the president to counterattack… After a brief discussion, however, calmer heads prevailed, and Mr. Trump’s staff huddled over a computer just outside the Oval Office to draft the statement that was ultimately released.”

Politico: “Trump handled it better than anyone expected… He didn’t yell or scream. He told the assembled crowd they had nothing to hide. The mood in the room appeared to be one of resigned acceptance even though they were blindsided.”

LOL.  If you didn’t have anything to hide, why fire Comey?  Why spend four months do everything you can to end this investigation and engage in a cover up?

COMEY SPEAKS: First, the New York Times:  “Mr. Comey described all of his contacts with the president and the White House — including the phone call from Mr. Trump — in detailed memos he wrote at the time and gave to his aides. Congressional investigators have requested copies of the memos, which, according to two people who have read them, provide snapshots of a fraught relationship between a president trying to win over and influence an F.B.I. director and someone who had built his reputation on asserting his independence, sometimes in a dramatic way.”   “Mr. Comey has spoken privately of his concerns that the contacts from Mr. Trump and his aides were inappropriate, and how he felt compelled to resist them.”

Second, a must-read from Benjamin Wittes: What James Comey told me about Donald Trump.

Third, from CBS News: Former FBI Director James Comey “most definitely” wants to testify before Congress — and wrote other memos in addition to the one claiming President Trump asked him to drop an FBI investigation into former national security adviser Michael Flynn.

Fourth, from the Washington Post: FBI Director James Comey “prepared extensively for his discussions with President Trump, out of concern that the president was unlikely to respect the legal and ethical boundaries governing their respective roles.” “The associates recounted how worried Comey was about meeting with Trump and recalled conversations in which they brainstormed how to handle moments in which the president asked for details of an investigation.”

It says “We need to see the Memo.” and “Sessions Must Go.”

EITHER PENCE IS A LIAR, OR HE IS INCOMPETENT.  “Michael Flynn told President Trump’s transition team weeks before the inauguration that he was under federal investigation for secretly working as a paid lobbyist for Turkey during the campaign,” the New York Times reports.  “Despite this warning, which came about a month after the Justice Department notified Mr. Flynn of the inquiry, Mr. Trump made Mr. Flynn his national security adviser. The job gave Mr. Flynn access to the president and nearly every secret held by American intelligence agencies.”

Vice President Pence was the active and engaged head of the Trump Transition.  He took over from the inactive and horrible Chris Christie.   But Pence has been saying he never knew about Flynn, and was kept in the dark about Flynn’s alleged wrongdoing, according to a source close to the administration, who cited a potential “pattern” of not informing the vice president and calling it “malpractice or intentional, and either are unacceptable,” NBC News reports.   “The source close to the administration, who requested anonymity as the White House denies the story, is now saying that Pence and his team were not made aware of any investigation relating to Flynn’s work as a foreign agent for Turkey.”

That shows that Pence is distancing himself from Trump.  But it also shows that either Pence was incompetent as the chair of the Transition, or he is lying now.  Pence has show no issues with knowingly lying for his boss (see his performance on Capitol Hill last week about Trump’s reasoning on firing Comey).  So I believe he is just a liar.

TRUMP’S THIRD COUNT OF OBSTRUCTION OF JUSTICE: “Late last month, fired National Security Adviser Michael Flynn — under investigation by federal prosecutors, with his lawyer seeking immunity for him to testify to Congress — met with a small group of loyalists at a restaurant in the northern Virginia suburbs,” Yahoo News reports.

“Saddled with steep legal bills, Flynn wanted to reconnect with old friends and talk about potential future business opportunities. But one overriding question among those present were his views on the president who had fired him as national security advisor.”

“Flynn left little doubt about the answer. Not only did he remain loyal to President Trump, he indicated he and the president were still in communication. ‘I just got a message from the president to stay strong,’ Flynn said after the meal was over, according to two sources who are close to Flynn and are familiar with the conversation, which took place on April 25.”

As a direct result, Mike Flynn is refusing to comply with congressional subpoenas.   “The top Republican on the Senate intelligence panel says Michael Flynn’s lawyers say he will not honor the committee’s subpoena for documents,” the AP reports.

Indeed, “Trump doesn’t just hope that Flynn will beat the rap. Several sources close to Flynn and to the administration tell the Daily Beast that Trump has expressed his hopes that a resolution of the FBI’s investigation in Flynn’s favor might allow Flynn to rejoin the White House in some capacity—a scenario some of Trump’s closest advisers in and outside the West Wing have assured him absolutely should not happen.”

“House Republicans facing tough reelection bids are running for cover from Donald Trump — an early sign that they believe the president’s deepening scandals could cost them their seats and even put the House in play,” Politico reports.

“More than 10 centrist Republicans over the past 48 hours have criticized Trump for reportedly sharing classified information with Russian officials or allegedly trying to quash an FBI investigation.”

DEPUTY AG ROD ROSENSTEIN GOES UP THE HILL.  And we learned yesterday it is pronounced StEYEn not StEEn.   He told the full Senate he knew that former FBI Director James Comey would be fired before he wrote his controversial memo that the White House initially used as justification for the firing, the Washington Post reports.  Said Sen. Richard Durbin (D-IL): “He learned the president’s decision to fire him and then he wrote his memo with his rationale.”

A new SurveyUSA poll finds that 56% of Americans (including 1 in 4 Republicans) say President Trump “sometimes loses touch with reality.”  Also interesting: 37% say Trump “is unable to distinguish between what is true and what is made up.”

MUELLER’S HISTORY OF STANDING UP TO A PRESIDENT ABUSING HIS POWER: Robert Mueller, “who served as director of the Federal Bureau of Investigation during the last two administrations, brings to his new role as special counsel a proven willingness to take on a sitting president,” the Washington Post reports.

“In a high-drama episode in 2004, he and then-Deputy Attorney General James Comey were preparing to resign from their positions if President Bush reauthorized the National Security Agency’s warrantless wiretap program without changes. Bush backed down.”

16. My further thoughts on this question are here: https://t.co/eLE07UhabA

A new Washington Post-Schar School poll in Virginia finds the Democratic race for governor very close, with Tom Perriello (D) at 40% and Ralph Northam (D) at 38%.

I am a Clinton voter for Perriello, not that that matters all too much.

18 CALLS AND EMAILS: “Michael Flynn and other advisers to Donald Trump’s campaign were in contact with Russian officials and others with Kremlin ties in at least 18 calls and emails during the last seven months of the 2016 presidential race,” current and former U.S. officials familiar with the exchanges told Reuters.

“The previously undisclosed interactions form part of the record now being reviewed by FBI and congressional investigators probing Russian interference in the U.S. presidential election and contacts between Trump’s campaign and Russia.

Under Trump, inconvenient data is being sidelined https://t.co/vXKQHN1Xp2

TRUMP’S WORST NIGHTMARE COME TRUE. Politico: “Under terms of his appointment by Deputy Attorney General Rod Rosenstein, Mueller will have wide powers to investigate ‘any links and/or coordination between the Russian government and individuals associated with the campaign of President Donald Trump’ and—beyond that—’any matters’ that arise from the investigation, including perjury and obstruction of justice.”

“The wide scope suggests an inquiry that is almost certain to last for years, given the history of these sorts of investigations, and will have an unpredictable impact on near year’s congressional midterm elections and the early jockeying in the 2020 presidential campaign. There are likely to be strains between Mueller’s inquiry and those being conducted on Capitol Hill, especially if congressional investigators want to give immunity to targets of Mueller’s investigation in exchange for their testimony, which would complicate the former FBI director hopes of ever obtaining criminal convictions.”

Mike Allen: “Mueller is by-the-book, focused on making cases, viewed as impervious to outside influence.”

“Mueller also happens to be friends with the spurned Jim Comey, another reason that the choice — announced by Deputy Attorney General Rod Rosenstein, who apparently was irate that the Comey firing was initially pinned on him by the White House — is worrisome for the West Wing.”

New York Times: “It would be hard to imagine a choice less helpful to the White House.”