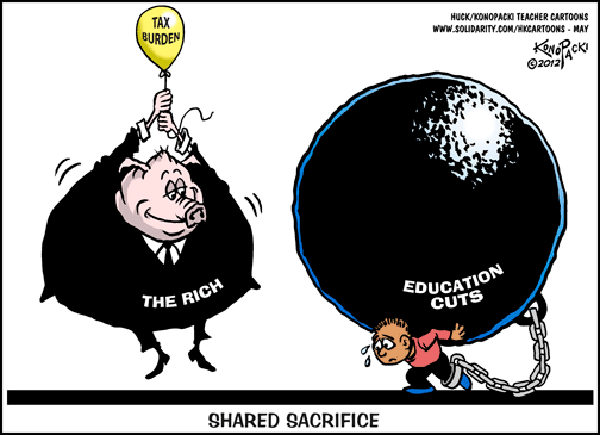 We already know that there was a deal cut in the House (do we know about the Senate yet?) to get the Corporate Tax increase proposed by Governor Carney that was passed in return for eliminating the Estate Tax.

While the whole “Shared Sacrifice” messaging was trite and weak to begin with, today we understand quite completely that it is a lie.

And don’t even get me started on the moral bankruptcy of imposing Shared Sacrifice on kids.  Undermining our future just so you can make sure that wealthy people are not mean to you is unconscionable.  It also doesn’t sync up with the need to attract employers here.  Our kids need a solid foundation and skills to be able to provide the kind of workforce that might attract the employers the Governor and the Chamber keep talking about.  Too bad that neither of them see a genuine investment in education as the pathway to that kind of employment.  People will move to places where their kids can get a great education. Instead, we ask our kids to sacrifice for a thing they didn’t cause and that they have no say in fixing.  But we will give back money to wealthy people — because the middle class and working class people who need their kids to get a solid education are just not going to be a priority.

Shared Sacrifice also prioritizes Department of Corrections funding.  Certainly, the DoC has been shortchanged for more years than we know  — adequate staff, staff salaries, staff training,  staff equipment, prisoner support programs, facilities maintenance — have all been underfunded for years and we saw the consequences of that this winter.  This needs to be addressed and fixed for the long term.  But let’s not forget that we have a Government that is ramping down its investment in schools — the place we most need to work so that the DoC doesn’t have as much to do.  These are not great optics, Democrats.

After yesterday’s vote, what we know for certain is that there are some of us who are going to be asked for more sacrifice than others.  And while I understand the deal making that you have to do to get to a desired outcome,  we cannot forget that Democrats collaborated specifically on the GOP agenda of helping wealthy people get wealthier — an agenda that doesn’t help a single working-class or middle-class person.  An agenda that doesn’t help get our kids a world class education.

6 comments on “The Lie of Shared Sacrifice”