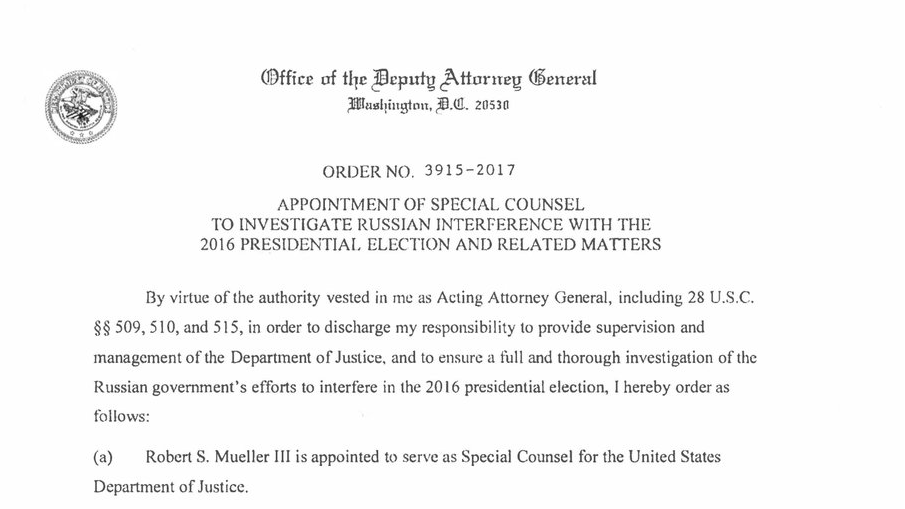 The U.S. Department of Justice has named former FBI Director Robert Mueller as special counsel in charge of Russia investigation.

Said Deputy Attorney General Rod Rosenstein: “I determined that it is in the public interest for me to exercise my authority and appoint a Special Counsel.”

Washington Post: “The move marks a concession by the Trump administration to Democratic demands for the investigation to be run independently of the Justice Department. Calls for a special counsel have increased since Trump fired FBI Director James Comey last week.”

New York Times: “The appointment of Mr. Mueller dramatically raises the stakes for President Trump in the multiple investigations into his campaign’s ties to the Russians.”

NBC News: Flynn and Manafort have emerged as key figures in FBI's Russia probe that was just taken over by Muellerhttps://t.co/fTfsW8x7IO

Foreign Policy: “NATO is scrambling to tailor its upcoming meeting to avoid taxing President Donald Trump’s notoriously short attention span. The alliance is telling heads of state to limit talks to 2 to 4 minutes at a time during the discussion, several sources inside NATO and former senior U.S. officials tell FP. And the alliance scrapped plans to publish the traditional full post-meeting statement meant to crystallize NATO’s latest strategic stance.”

“On May 25, NATO will host the heads of state of all 28 member countries in what will be Trump’s first face-to-face summit with an alliance he bashed repeatedly while running for president. NATO traditionally organizes a meeting within the first few months of a new U.S. president’s term, but Trump has the alliance more on edge than any previous newcomer, forcing organizers to look for ways to make the staid affair more engaging.”

Washington Post: “In the days leading up to Trump’s high-risk debut on the world stage — a nine-day, five-stop, four-nation tour — the Oval Office has morphed into a graduate seminar room, with a rotating roster of policy experts briefing the president.”

“Trump’s advisers say the president understands the stakes and is taking his preparation seriously. His team deliberately scaled back his public schedule in the two weeks leading up to his planned Friday departure, even though much of his time last week was eaten up by the Comey drama and talks about shaking up his West Wing staff… The process largely is being overseen by Jared Kushner, the president’s son-in-law and a senior adviser, as well as McMaster and deputy national security adviser Dina Powell.”

I wonder if any of Trump's staffers will put this story on his desk: https://t.co/mf2bmOwb7m

Josh Marshall on the Special Prosecutor appointment: “First, this is a good pick.  Mueller has a strong reputation for professionalism. He was in DC for years. So people will have disagreements about this or that. He also headed the FBI for the whole post-9/11 era, during which the US pursued numerous highly controversial law enforcement and counter-terrorism policies. But with Mueller overseeing the investigation, I think that if anyone under scrutiny broke any laws they’re likely in pretty big trouble. For the purposes of this appointment, that’s what matters. I don’t think Mueller has any interest or willingness to cover for President Trump or any of his associates.

Jake Tapper took exception on CNN at President Trump’s claim that he’s been treated more unfairly than any other president in history.

Said Tapper: “Every single one of the president’s wounds is self-inflicted. Every single one. I don’t really understand the propensity for self-pity at a time like this.”

He added:  “My second reaction is, four U.S. presidents have been actually literally assassinated and killed. But more broadly speaking, when it comes to a president that has been treated unfairly, I mean that president led the charge claiming that the first African-American president was born in Africa. Which is not only a charge that is false, but is not a little bit racist.”

Five days before we learned that ousted FBI Director James Comey had written a memo saying President Trump asked him to stop the investigation into National Security Adviser Michael Flynn, the former top Justice Department spokesman tweeted this:  “One thing I learned at DOJ about Comey: he leaves a protective paper trail whenever he deems something inappropriate happened. Stay tuned.”

Today, Miller told the Washington Post: “We have no idea who made the decision to leak this, whether it was Comey himself or it was people at the FBI. And we don’t know what their complete strategic goals are. But if you were really looking to damage the president, you wouldn’t leak the most damaging memo first. So who knows what comes next?”

“In the House Republicans’ conference meeting on Capitol Hill this morning, the mood among members was subdued and somewhat anxious,” according to Jonathan Swan.

One source described members as “shellshocked.”

“Republican leaders are distressed by what’s going on, but don’t want to join the pile on… The posture (for now): let’s get the facts out there and try to be ‘sober’ about them. The last thing GOP leaders want is for pertinent facts to remain undisclosed, because all that means is the news media will ferret them out, blast them out and further shake the system.”

He has no idea. Compared to the global press, domestic networks will feel like the green room for Hannity. https://t.co/gSxSkQnas3

A Russian state-run bank under scrutiny by U.S. investigators “financed a deal involving Donald Trump’s onetime partner in a Toronto hotel tower at a key moment for the project,” the Wall Street Journal reports.

“U.S. investigators are looking into any ties between Russian financial institutions, Mr. Trump and anyone in his orbit, according to a person familiar with the probe. As part of the investigation, they’re examining interactions between Mr. Trump, his associates and VEB, which is now subject to U.S. sanctions, said another person familiar with the matter. The Toronto deal adds a new element to the list of known connections between Mr. Trump’s associates and Russia.”

"Never assume that a call from Donald is private"—A former Trump employee speaks out https://t.co/Ydll2Fg7Qc

Richard Painter and Norm Eisen: “After the revelations of the past 24 hours, it appears that President Trump’s conduct in and around the firing of the F.B.I. director, James Comey, may have crossed the line into criminality. The combination of what is known and what is credibly alleged would, if fully substantiated, constitute obstruction of justice. It is time for Congress and a special counsel in the executive branch to conduct objective, bipartisan inquiries into these allegations, together with the underlying matters involving Michael Flynn and Russia that gave rise to them.”

Republicans close to the White House tell Mike Allen that yesterday’s revelations “could take President Trump into a legal or constitutional realm where his staff and supporters can’t save him.”

Said one: “A week ago, we were talking about the agenda grinding to a halt. Now, the train is going down the hill backwards.”

This is important: “Watch for Trump to continue stoking his base, because his support there is what gives him power over lawmakers: They’re much less likely to abandon or undermine him if he remains popular in their states or districts. It’s his most basic survival strategy — and it’s another reason he won’t change.”