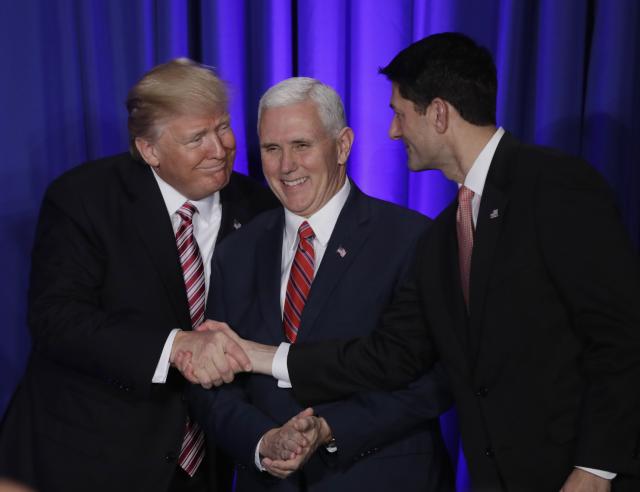 Several commenters have been discussing Pence and his role in this mess. It’s highly improbable, as the flippin’ head of Trump’s transition team, that he’s as clueless as he’s claiming he is.

Josh Marshall lays it out in a piece entitled “Big Trouble” – and you really need to read the entire article!

Reuters says that Mike Flynn and other Trump campaign officials were in contact with Russian government officials at least 18 times between April and November of last year.

McClatchy reports that shortly before President Trump’s inauguration, Mike Flynn effectively killed a military operation against ISIS that would have used Kurdish paramilitaries. The plan was later revived after Flynn’s ouster. But his decision delayed it for months. Any US operations with the Kurds would be firmly against the wishes of Turkey. This was while Flynn was working on behalf of the Republic of Turkey as an unregistered foreign agent.

The Times reports that on January 4th, Flynn notified Trump Transition lawyer and now White House Counsel Donald McGahn that he was being investigated for his undeclared lobbying work on behalf of Turkey.

Those are three pretty big stories. I expect the Russia one will become a big deal in the coming days, but Josh breaks down the other two.

Let’s deal first with killing the anti-ISIS operation with Kurdish forces.  This is incredibly serious. We’ve known that Flynn was taking hundreds of thousands of dollars during the campaign to lobby on behalf of Turkey.

Here though Flynn’s Turkish lobbying seems arguably to have had a very, very concrete effect, one it could only have had if President Trump had put him in a position of unique power after knowing he was being investigated over that Turkish money.

If I’m understanding the timeline correctly, Flynn did this when the Trump team already knew he was a paid agent working on behalf of Turkey, indeed, already knew the DOJ was investigating him for that undisclosed payment. You can likely make determinations about people who lived or died because of this decision. It doesn’t get more serious because it’s not just about abstract decision-making but life and death when illegal money is involved and the cash is arguably driving the decisions.

It really doesn’t get more serious than this.

But what about Pence?

In this case, Pence was saying in March that he was only just learning about Flynn’s work for Turkey. But we now learn that Flynn had notified McGahn he was being investigated by the DOJ for that work at the beginning of January.

Maybe for some reason McGahn somehow didn’t tell Pence. But that’s very, very hard to figure since Flynn was in line for one of the most consequential positions in any presidency and McGahn had just been notified of a fact that under most circumstances would be disqualifying. If Pence lied about this part of the Flynn saga, the idea that he innocently passed on Flynn’s lies about the Kislyak conversation instantly looks much less credible.

Go read the whole thing. Pence might be flying under the radar because there’s simply so much going on right now, but his time in the spotlight is coming.