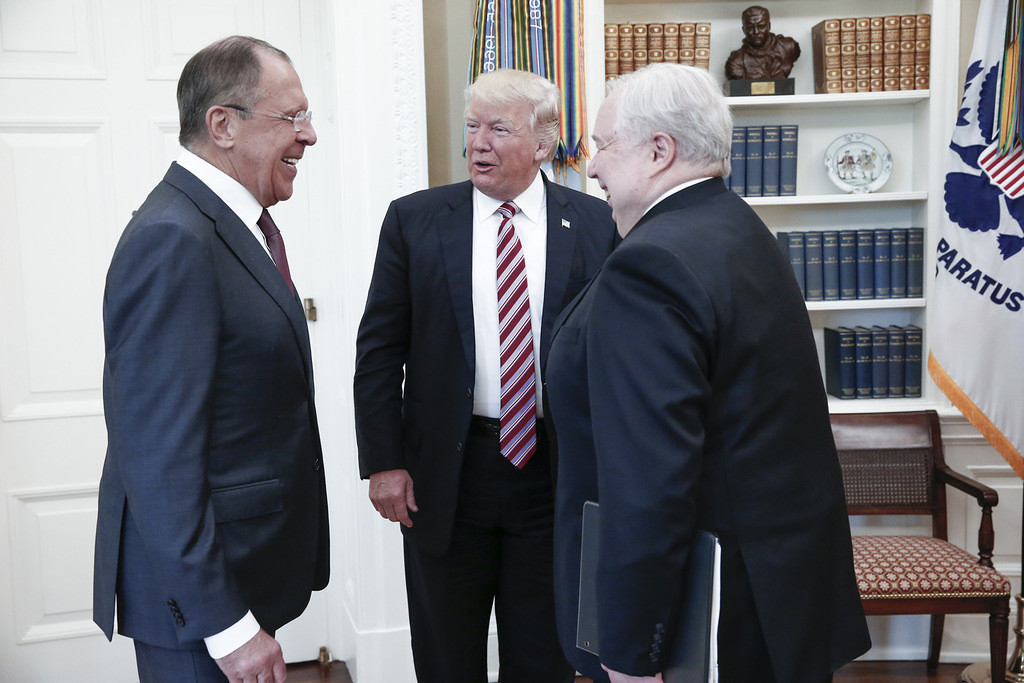 President Trump “revealed highly classified information to the Russian foreign minister and ambassador in a White House meeting last week, according to current and former U.S. officials, who said that Trump’s disclosures jeopardized a critical source of intelligence on the Islamic State,” the Washington Post reports.

“The information Trump relayed had been provided by a U.S. partner through an intelligence-sharing arrangement considered so sensitive that details have been withheld from allies and tightly restricted even within the U.S. government. The partner had not given the United States permission to share the material with Russia… After Trump’s meeting, senior White House officials took steps to contain the damage.”

Trump seemed to be boasting about his inside knowledge of the looming threat: “I get great intel. I have people brief me on great intel every day.”

So the Washington Post story (which WH never actually denied) is right? And his aides have been undercut again? pic.twitter.com/ft7TPgwY8s

Your national security adviser put his integrity and credibility on the line last night in proclaiming the story to be false, and now you revealed him to be a liar again.  McMaster should quit today.

Eliot Cohen: “This is how one’s reputation for veracity is infected by the virulent moral bacteria that cover Donald Trump. Friends will watch, pained and incredulous, as they realize that one simply cannot assume that anything these senior subordinates of the president say is the truth. And having stretched, manipulated, or artfully misrepresented the truth once, these officials will do it again and again. They will be particularly surprised when they learn that most people assume that as trusted subordinates of the president, they lie not as colorfully as he does, but just as routinely. Perhaps the worst will be the moment when these high officials can no longer recognize their own characters for what they once were.”

“One can be certain that (metaphorically speaking) at this very moment ice picks are sliding into unsuspecting kidneys in the White House. No doubt the president is raging at the cowed subordinates who have to cover yet again for his folly and grandiosity; no doubt that some subordinates see this as an opportunity to settle scores, undermine rivals, and curry favor. It is probably a fascinating if odious spectacle.”

Playbook on Trump’s last 7 days: “Trump fired the FBI director, surprising most of his communications staff and bucking some senior aides. He mused aloud about surreptitiously taping his conversations in the White House, alarming official Washington. Republicans have quickly turned against the president, saying he needs to fork over the recordings or else. The White House, inexplicably, has no answer. He then met with the Russian foreign minister and ambassador, where we now hear he at least mentioned highly classified information.”

Why did Trump reportedly reveal classified information to the Russian FM? Because he loves to brag https://t.co/SsR438bpRN

David Brooks: “At certain times Donald Trump has seemed like a budding authoritarian, a corrupt Nixon, a rabble-rousing populist or a big business corporatist.”

“But as Trump has settled into his White House role, he has given a series of long interviews, and when you study the transcripts it becomes clear that fundamentally he is none of these things.”

“At base, Trump is an infantalist. There are three tasks that most mature adults have sort of figured out by the time they hit 25. Trump has mastered none of them. Immaturity is becoming the dominant note of his presidency, lack of self-control his leitmotif.”

GOP Sen Corker on Trump WH: "in downward spiral. chaos being created by lack of discipline." my @CNBC column https://t.co/V06fC1j8OP

Jonathan Chait says only Impeachment can stop Trump: “Outside the inner circle of Republicans with access to the commander-in-chief, Trump’s popularity remains respectable, even solid. The conservative base is largely unaware of the constant revelations of Trump’s gross incompetence, or has been trained to ignore them as propaganda emanating from the administration’s enemies in the deep state or the liberal media. In red America, Trump remains a hero at best, and a competent, normal president at worst.”

“And so, at the moment, Congress remains in the hands of a party that conceives of its role as Trump’s junior partner. His erratic behavior is disconcerting to them, but their pain is mostly private, and mostly confined to the risks it implies to their domestic agenda. The system is designed so that the only remedy for a president who cannot faithfully act in the public interest is impeachment. For the moment, that course of action – the only one that can save the country from the dire risk of its man-child president – is unfathomable to the Republicans who have a hammerlock on government.”

Rep. Al Green (D-TX) called for the impeachment of President Trump, “marking the most explicit call yet by a member of Congress to start the process of ousting the president,” BuzzFeed reports.  “Green, in a statement, cited Trump’s ‘obstruction’ in the investigation into whether his campaign coordinated with Russia during the 2016 election. Green pointed specifically to Trump’s decision to fire FBI Director James Comey last week, as well as Trump’s tweet stating that Comey ‘better hope that there are no tapes of our conversations’ and that Trump ‘acknowledged he considered the investigation when he fired’ Comey.”

"Every time I feel like we’re getting a handle on the last Russia fiasco, a new one pops." https://t.co/iaQJW1As25

“Preparations for the trip come as Trump’s inner circle appears to be shrinking, fueling paranoia inside the West Wing among a fatigued staff battered by a drumbeat of reports suggesting some senior staffers are on the chopping block.”

“While some kind of shake-up appears nearly inevitable at this point, insiders caution it doesn’t seem imminent — at least, not right now.”

“The White House refused to say Monday whether it would comply with congressional requests to produce possible recordings of conversations between President Trump and White House visitors,” The Hill reports.  Facing repeated questions from multiple news outlets, White House press secretary Sean Spicer went back to the same line: “The president has made it clear what his position is.”

“Spicer’s response heightened a standoff between the executive and legislative branches that could complicate the process to replace Comey.”

Whatever reverence Trump holds, it is of himself. https://t.co/tQRMOjj7VD

HuffPost: “This is a golden age of Democratic online organizing. According to experts, the wave of anti-Donald Trump sentiment may represent a rare opportunity for lawmakers to shift away from a reliance on big-money donors and toward a system popularized by Sen. Bernie Sanders (I-VT) during his presidential run: small-dollar giving that begets sustained forms of activism.”

“Campaign fundraisers say the deluge of money currently coming in online is unlike anything the party has ever seen in the first quarter following a presidential election. More than one operative described investments in digital advertising as ‘free money,’ and as a chance for someone with an eye on the White House to build a foundation for that campaign.”

Lawfare: “Questions of criminality aside, we turn to the far more significant issues: If the President gave this information away through carelessness or neglect, he has arguably breached his oath of office. As Quinta and Ben have elaborated on in some detail, in taking the oath President Trump swore to ‘faithfully execute the Office of President of the United States’ and to ‘preserve, protect and defend the Constitution of the United States’ to the best of his ability. It’s very hard to argue that carelessly giving away highly sensitive material to an adversary foreign power constitutes a faithful execution of the office of President.”

“Violating the oath of office does not require violating a criminal statute. If the President decided to write the nuclear codes on a sticky note on his desk and then took a photo of it and tweeted it, he would not technically have violated any criminal law–just as he hasn’t here. He has the constitutional authority to dictate that the safeguarding of nuclear materials shall be done through sticky notes in plain sight and tweeted, even the authority to declassify the codes outright. Yet, we would all understand this degree of negligence to be a gross violation of his oath of office.”

This is being projected on @realDonaldTrump hotel in DC now!!! Love it!!! @BradMossEsq @Scott_H_Rome @ProfSchooner pic.twitter.com/E8tlgKsyc1

Two U.S. officials who were briefed on President Trump’s disclosure of classified information to Russia’s ambassador and foreign minister confirmed the story to BuzzFeed News, with one noting that “it’s far worse than what has already been reported.”