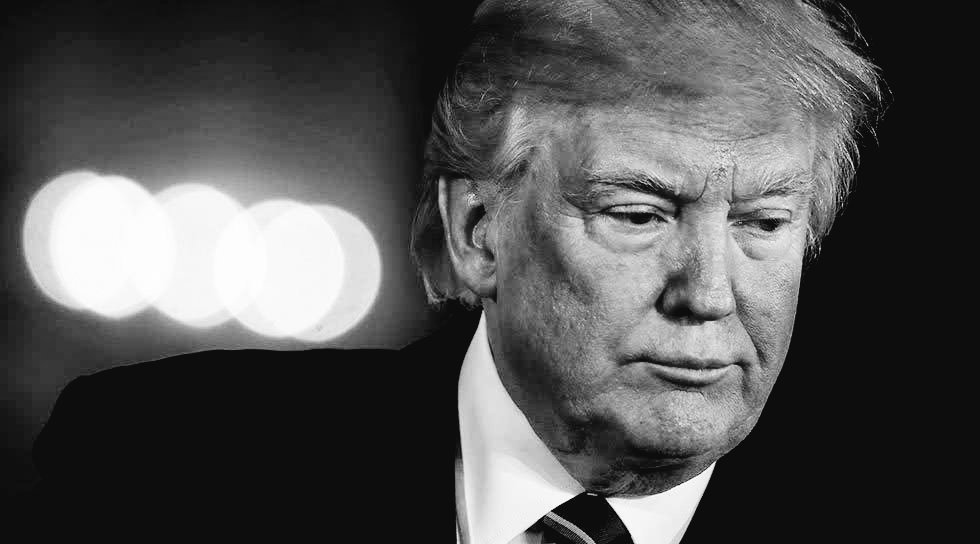 Only a dictator demands a loyalty pledge.  That, or a Mafia Don.  Which one are you, Donald?

In America, enforcers of the law owe their "loyalty" to the people, the law, and the Constitution only. https://t.co/pZnM4uIqsy

Washington Post: “Trump had long questioned Comey’s loyalty and judgment, and was infuriated by what he viewed as the director’s lack of action in recent weeks on leaks from within the federal government. By last weekend, he had made up his mind: Comey had to go.”

“Trump was angry that Comey would not support his baseless claim that President Barack Obama had his campaign offices wiretapped. Trump was frustrated when Comey revealed in Senate testimony the breadth of the counterintelligence investigation into Russia’s effort to sway the 2016 U.S. presidential election. And he fumed that Comey was giving too much attention to the Russia probe and not enough to investigating leaks to journalists.”

Politico: “Senior aides and other associates who know the president say the firing was triggered not by any one event but rather by the president’s growing frustration with the Russia investigation, negative media coverage and the growing feeling that he couldn’t control Comey, who was a near-constant presence on television in recent days.”

“I don’t know if the viewers picked up on just how extraordinary that piece of tape… is. But the president of the United States just admitted on national television that he called the director of the FBI to get an update on the status of a possible criminal investigation against him.  Now, for Republicans, and editorial boards who rightly condemned Loretta Lynch for meeting Bill Clinton on the summer, to talk about golf and kids and grandchildren, I wonder if those Republicans are going to be just as critical of the president of the United States asking the FBI director if he was under criminal investigation…  And the president just admitted that he did this, and we know that since that’s an admission against interest as we would say in the court, we know that part is true, but we know the other part is a lie. Because Jim Comey has sworn under oath that Donald Trump is under investigation, and we heard again today by the acting director of the FBI that it’s an investigation that they take very seriously.”

We can impeach the President without even a hearing, today, if we wanted to, based on that interview alone.   Proving obstruction of justice requires understanding Trump’s motivations at the time he ordered the firing of Comey. Thanks to this interview with NBC News, Trump helped us all out with that, telling us his state of mind and even admitted that his problems with Comey stemmed, at least in part, from the Russia investigation.  Said Trump: “When I decided to do it, I said to myself… this Russia thing with Trump and Russia is a made up story.”

In addition, Trump admitted to discussing with Comey whether or not he was a target of the FBI’s investigation at least three times, once at a private dinner and twice on the phone. Legal experts tell NBC News these conversations were improper.

A source tells CBS News that the Russia investigation is considered to be “a crisis” within the FBI and “there is a whole lot of interfering.”

“The succession of events surrounding Comey’s firing is not considered to be a coincidence by the agency. In the week before he was terminated, Comey asked Deputy AG Rod Rosenstein for additional resources to pursue the Russia investigation.”

HuffPost: “The breadth of the president’s interference in the investigations of his own campaign has shocked officials at law enforcement agencies and on Capitol Hill, both for the extent to which it disregards political norms and the potential it has to upend legitimate oversight. And it’s forced a major readjustment within those agencies to try and immunize themselves from White House influence.”

Before he was fired, Comey was to investigate FBI leaks to Giuliani. There may be a Giuliani angle in Comey story. https://t.co/UE7P2oj2gx

A new Quinnipiac poll asked respondents for the first word that comes to mind when they think of President Trump. The answer given more times than any other was “idiot,” followed by “incompetent” and “liar.”

The same poll finds just 21% of American voters approve of the Republican health care plan passed by the U.S. House of Representatives last week.  “Except for an anemic 48% to 16% support among Republicans, every listed party, gender, educational, age and racial group opposes the plan.”

A new NBC News/Survey Monkey poll finds 54% of Americans think President Trump’s dismissal of FBI Director James Comey was not appropriate, while 38% say it was appropriate.

In addition, 46% think Trump fired Comey due to his handling of the Russia investigation, another 24% think the dismissal was due to the Clinton email investigation and 22% said it was something else.

“In the weeks before President Trump fired FBI Director James Comey, a federal investigation into potential collusion between Trump associates and the Russian government was heating up, as Mr. Comey became increasingly occupied with the probe,” the Wall Street Journal reports.

“Mr. Comey started receiving daily instead of weekly updates on the investigation, beginning at least three weeks ago, according to people with knowledge of the matter and the progress of the Federal Bureau of Investigation probe. Mr. Comey was concerned by information showing possible evidence of collusion, according to these people.”

Time: “The waiters know well Trump’s personal preferences. As he settles down, they bring him a Diet Coke … With the salad course, Trump is served what appears to be Thousand Island dressing instead of the creamy vinaigrette for his guests. When the chicken arrives, he is the only one given an extra dish of sauce. At the dessert course, he gets two scoops of vanilla ice cream with his chocolate cream pie, instead of the single scoop for everyone else.”

“Few rooms have changed so much so fast as his dining room, where he often eats his lunch amid stacks of newspapers and briefing sheets. A few weeks back, the President ordered a gutting of the room… He watches the TV screen like a coach going over game tape, studying the opposition, plotting next week’s plays. “This is one of the great inventions of all time— TiVo,” he says as he fast-forwards.”

“But the thing he wants to show is on the opposite wall, above the replace, a new 60-plus-inch at-screen television that he has cued up with clips from the day’s Senate hearing on Russia. Since at least as far back as Richard Nixon, Presidents have kept televisions in this room, usually small ones, no larger than a bread box, tucked away on a sideboard shelf. That’s not the Trump way.”

Ousted FBI Director James Comey told associates that President Trump was “outside the realm of normal,” even “crazy,” according to the New York Times.

Acting FBI Director Andrew McCabe told the Senate Intelligence Committee that James Comey had not, as the White House said, lost the broad confidence of the bureau’s employees, Axios reports.

Said McCabe: “No sir, that is not accurate… I can tell you that I hold Director Comey in the absolute highest regard… It has been the greatest privilege and honor of my professional life to work with him… I can confidently tell you that the vast majority of FBI employees enjoyed a deep and positive connection to him.”

He also said the Russia investigation is “highly significant,” contradicting White House spokesperson Sarah Sanders who said it is, “one of the smallest things that they’ve got going on their plate.”

Indeed, the Washington Post reports that he “threatened to resign after the narrative emerging from the White House on Tuesday evening cast him as a prime mover of the decision to fire Comey and that the president acted only on his recommendation.”

“The White House has abandoned the idea of President Trump visiting FBI headquarters after being told he would not be greeted warmly,” administration officials tell NBC News.

“And FBI agents said that, while many of them voted for Trump, after the president unceremoniously fired a very popular director James Comey few were ready to meet him at the bureau with open arms.”