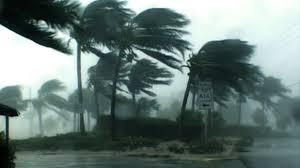 Hurricane Matthew hit the coasts of Florida, Georgia and the Carolinas back in October — and if you remember the North Carolina flooding, it was massive AND it was inland. It even swamped or closed portions of 95 through the state.

North Carolina officials estimate the storm did $2.8 billion in damage, which doesn’t include $2 billion in economic losses. In the days after the storm, Congress gave North Carolina around $332 million for immediate disaster relief in addition to the assistance FEMA provided. In December, the Department of Housing and Urban Development (HUD) provided the state with $199 million for long-term relief and rebuilding.

North Carolina asked for $929M back in April from HUD for additional disaster relief and they’ll likely get +/- 7M to cover their losses. Much of this is because the budget supplemental that kept the government going allocated so little money to disaster relief. So North Carolina — hit with a major storm, is going to get less than 1% of its relief request.

In a Wednesday statement, Cooper called the decision “an incredible failure by the Trump administration and Congressional leaders to turn their backs” on families trying to rebuild and recover.

Cooper says homes and small businesses are still in need of repair. Structures that flooded in Matthew need to be elevated and prevent a similar disaster in the future. North Carolina agriculture was hit particularly hard, and Cooper wants to supplement farmers for losses not covered by the U.S. Department of Agriculture.

And this right here is CHOICE:

Rep. David E. Price, who worked with the governor along with Sen. Thom Tillis to measure how much money the state needs to rebuild, says he share’s Cooper’s disappointment.

“Many programs included in the Governor’s request received no funding at all,” Price said in a statement to The Washington Post, “and the housing grants provided in the bill will meet only a small fraction of North Carolina’s need due to the formula used by HUD to allocate such funding.”

It sounds as though these legislators are going to ask for money in the 2018 budget. Who knows what natural disasters will have piled up by then. Every state with exposure to disastrous weather, fires, earthquakes needs to be really worried. No state budget can bear these costs, which is why the Federal government is the last resort for recovering from disasters.

So the lesson here is that if you need help to recover from Mother Nature’s wrath, you need to hire Democrats. Republicans will just tell you to Go Fuck Yourself.

2 comments on “What the GOP’s Smaller Government Looks Like”