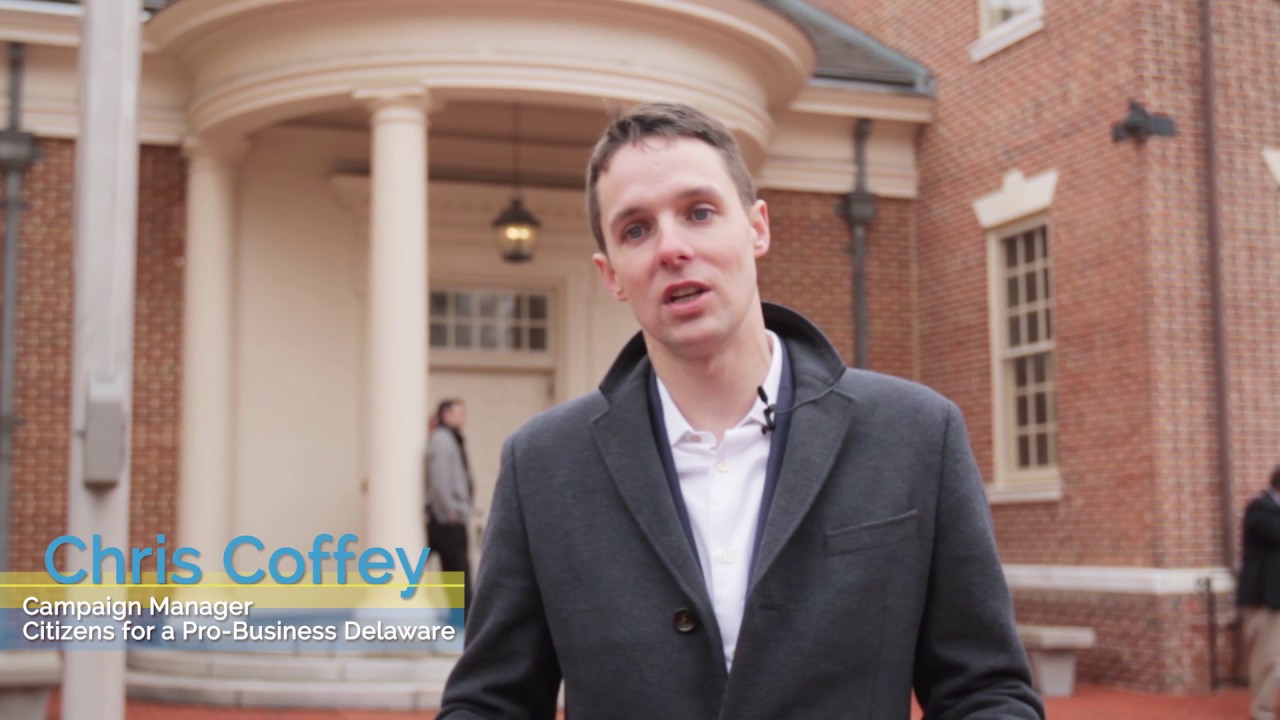 Chris Coffey, pictured above, is the campaign manager for Citizens for a Pro-Business Delaware (CPBD).  He has a warning to those who would dare oppose his efforts to destroy Delaware’s ability to resolve intra-corporate disputes:

“I’m saying to those folks who will support us that we will be here long past this legislation and to the other side lobbying against us that we are not going anywhere,” said Chris Coffey, campaign manager for Citizens for a Pro-Business Delaware.

Coffey accused the Delaware State Bar Association’s Corporate Law Committee of being part of “Delaware’s old boy network.” He claims the group has threatened legislators supportive of the bill. The Corporate Law Committee has refused to endorse Bonini’s bill. Typically, the General Assembly is reluctant to change Delaware’s incorporation laws without the committee’s support.

“There are folks who are with us and we want them to feel comfortable,” Coffey said of the PAC.

What is this all about?   It’s about this company called TransPerfect.

TransPerfect is a court reporting, translation, and document management company.  The company was owned by a couple, who were once engaged, Phil Shawe and Liz Elting. But their personal split has led to infighting in the business, which has led to litigation in Delaware’s Chancery Court.   Last year, the Chancery Court ordered the sale of the company after concluding that fighting between Shawe and Elting, created “a dysfunctional atmosphere” that could harm both clients and employees.   Noted Delaware legal scholar Rudy Giuliani criticized the decision as judicial overreach.  Those who actually work in Delaware Corporate law, however, say the Chancellor accurately applied Delaware Law in this situation.  Regardless, Senator Bonini seeks to a fix a problem by making it worse it would seem. His SB53 would require the Court of Chancery to wait three years before it can order the sale of a company. It also will include other measures including the appointment of directors to break management deadlocks to avoid a sale.   I do not see how extending business infighting for three years is beneficial to the company.  For reasons passing understanding, State Representative John Kowalko is also a sponsor of the bill.

Look, kid, and I call you kid because you do look younger than me, you ain’t getting anywhere in this state with your New York threats.   You know who is responsible for the plight of the workers you represent?  Phil Shawe and Liz Elting.   You want to threaten anyone, threaten them.  It’s their petty infighting that has led them to this place.

I hate to say it, but Senator Greg Lavelle is right.  Ouch, that did hurt.

Sen. Greg Lavelle, R-Sharpley, called Citizens for a Pro-Business Delaware an “astroturf” campaign serving as a front for Shawe’s business interests.  “If [Shawe] spent half the time trying resolve his true differences with [Elting], his employees would be better served,” he said.

Simpson and Lavelle also took issue with Citizens for a Pro-Business Delaware’s claim that legislators on the Senate committee received nearly a dozen emails a day from Delaware residents in opposition to TransPerfect’s sale. The senators said citizens have been largely silent on the issue. Simpson said he only has received two calls over the past year while Lavelle, who is not a member of the committee, said he has fielded one.  […]

“I think it’s time to put this issue to rest,” [Senator Simpson] said. “This has dragged on for a year and a half. I don’t know much money they’ve spent trying to influence the Delaware Legislature, but I don’t think they are going to be any more successful by threatening it.”

5 comments on “TransPerfect’s PAC can shove their threats”