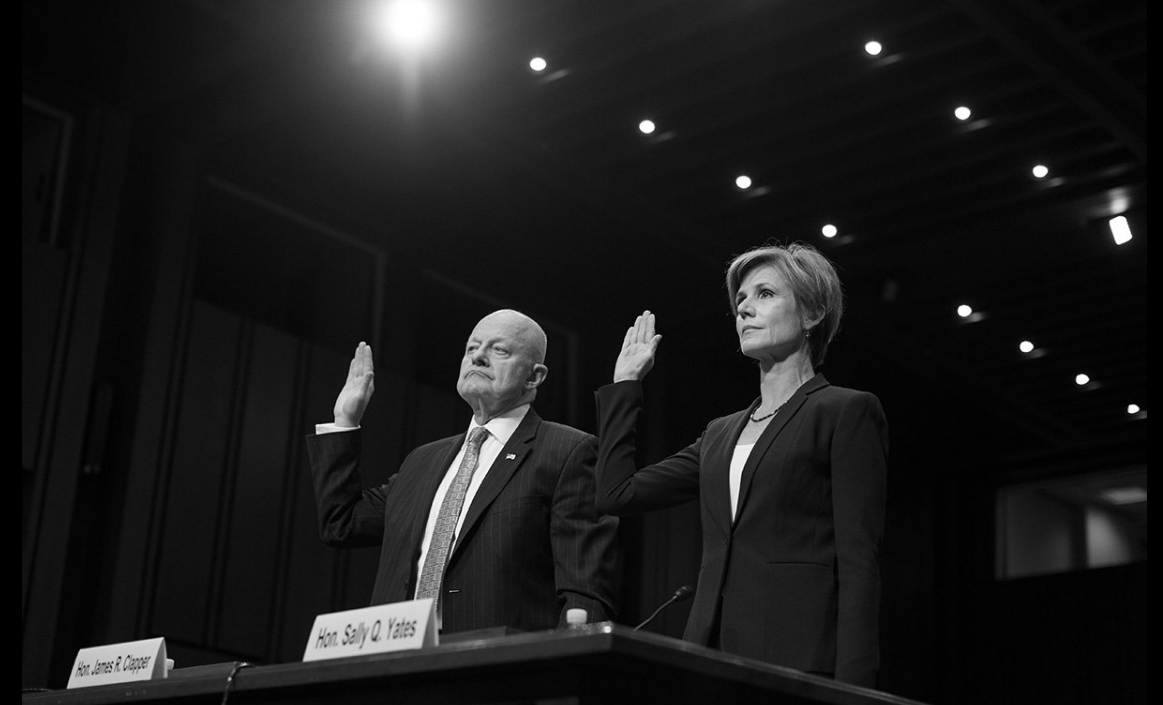 Lots of developments in TrussiaGate yesterday.  First, former President Obama warned Donald Trump against hiring Mike Flynn as his national security adviser, three former Obama administration officials tell NBC News. “The warning, which has not been previously reported, came less than 48 hours after the November election when the two sat down for a 90-minute conversation in the Oval Office.”

Meanwhile, Former Acting Attorney General Sally Yates told the U.S. Senate that in the first days of the Trump administration, she told the White House counsel that National Security Adviser Michael Flynn was susceptible to Russian blackmail, the New York Times reports.  Said Yates: “General Flynn was compromised in regard to the Russians.”

“Flynn had disclosed the December 2015 trip to Moscow to the DIA, but he never told them he was paid by RT… The Defense Department inspector general is now investigating whether Flynn broke the rules. The U.S. Constitution forbids retired generals from accepting foreign payments without permission.”

“Flynn’s failure to inform the DIA he had been paid has not been reported previously. In the past, lawmakers who reviewed documents said they had seen no evidence he had reported the fees. The revelation casts new light on the White House assertion Monday that the Obama administration should have denied Flynn a security clearance if officials were concerned about him.”

A new HuffPost/YouGov survey finds that 31% of Americans favor the American Health Care Act, which narrowly passed the Republican-controlled House last week, while 44% oppose the bill and 25% are unsure.  Interestingly, Trump voters have now coalesced around the bill in a way they failed to do earlier this spring with 75% now supportive of the proposed legislation.

A new University of Chicago poll found that only two out of the 37 economists that responded said that President Trump’s proposed tax cuts “would stimulate the economy enough to cancel out the effect on total tax revenue.”

“Those two economists now both say they made a mistake, and that they misunderstood the question.”

Politico: “Over the next several months, Republicans will have to figure out how to cut deals with Democrats to avoid a default on the national debt and avert a government shutdown, among several other must-pass items.”

“Though Congress avoided a government closure this month — a major bipartisan legislative accomplishment for an institution otherwise devoid of any this year — a quintet of critical deadlines in the early fall will force either a furious round of deal-making or brinkmanship that could have dire effects on the economy. It will be a major test of Trump and the all-GOP Congress’ ability to govern, who are bound to be blamed for any problems given their dominant political position.”

“As if avoiding a government shutdown and debt default weren’t enough, Congress will have to tackle three important programs set to expire at the end of September: Federal Aviation Administration law, federal flood insurance and a children’s health insurance initiative.”

Mike Allen: “For the first time, some key Republicans are pessimistic that tax reform can be finalized this year. It has to come after the 2018 budget (its own sinkhole). So tax reform could get pushed into 2018, and ambitious bills are even harder in an election year since the other side doesn’t want to give the White House a win.”

“Massive spending for an infrastructure package will be a tough sell with the hardline House Freedom Caucus and some Senate conservatives. So Trump will probably need Ds — tough before midterms.”

“The Rose Garden celebration on the House health bill was a sugar rush for Rs and no indication of momentum. The math on their own side remains intractable. And with the Cook Political Report‘s Amy Walter now giving Dems a 40-50% chance of taking the House, they’re less likely than ever to help Trump.”

Playbook: “The health-care hot potato is now in Senate Majority Leader Mitch McConnell’s (R-KY) hands. But expect this phase of the fight to look much different than it did in the House. McConnell is a much different operator than House leaders. He’s calm and cool, and does not get rattled easily. He doesn’t really succumb to pressure. We expect the Senate is going to take its time cobbling together whatever Obamacare repeal bill it can — it could take many months, insiders tell us. We expect the process to unfold like this: the Senate takes a while, the House and Trump begin to get angry and lash out at the Senate.”

“When congressional leaders say they are going to pivot quickly to tax reform, keep in mind that Congress needs to pass a new budget resolution first. Budgets lay out spending priorities. Republicans are far from unified on that.”

Mike Allen: “If health reform makes it to Trump’s desk, it’s unlikely to be before fall. It’ll take up the Senate calendar through the summer, then the conference committee and another floor fight in the House.”

A panel discussion on CNN Monday afternoon highlighted how unusual it was for President Donald Trump to publish a tweet attacking former acting Attorney General Sally Yates mere hours before she testified in Congress.

Rick Klein: “They stood together, at least long enough to enjoy a crisp spring afternoon in the Rose Garden. President Trump and House Speaker Paul Ryan put together the team that delivered on a longstanding Republican dream, in a vote that solidifies Ryan’s hold on power and establishes a template for all that winning the president promised. But everyone is awake now. First comes the challenge of getting back to that same spot on the White House grounds for a ceremony that involves a bill becoming an actual law. Then comes the fallout: fiscal, political and personal. If anywhere near 24 million people lose their health insurance, or if out-of-pocket costs for people with pre-existing conditions spike, which Republicans would want to face voters with this as their signature achievement? Do they even have confidence that Trump would defend his own bill, especially given his newfound affinity for Australia’s publicly funded universal health care?”

“Trump-Ryan could be the perfect GOP partnership, so long as it lasts – a mix of legislative brawn and brains that delivers. Or it could all end horribly for the Republican Party, with a mix of policy and politics that provokes a backlash that might seem familiar to those who’ve watched health care debates play out before. Republicans were celebrating the day. But it’s worth noting that they weren’t even the ones gloating the loudest on the House floor.”

In their New York Times article, “‘No District Is Off the Table’: Health Vote Could Put House in Play,” Jonathan Martin and Alexander Burns update the bad news for Republcians: Democrats are recruiting challengers aggressively, even in conservative-leaning districts, importuning an eclectic group of could-be candidates that includes a Minnesota gelato baron, a former candidate for governor of Kansas and the mayor of Syracuse….

“No district is off the table,” said Representative Ben Ray Luján of New Mexico, the House Democratic campaign chairman, who vowed that Democrats would cast the widest possible net…The Democrats need 24 seats to recapture the House majority, and they believe the most straightforward path back to power is through the 23 Republican districts won by Hillary Clinton in November, as well as the dozens more where President Trump remains deeply unliked…All told, 80 House Republicans from districts Mr. Trump carried by 55 percent or less voted for the health law’s repeal. “Any Republican member of Congress in a seat that the president won by less than 10 points who isn’t concerned needs to be concerned,” said Glen Bolger, a Republican pollster…Democrats are seizing the moment to seek out promising challengers, from blood-red Kansas to the blue-tinged suburbs of New Jersey and Pennsylvania, and enticing them with the prospect of a political wave…Reflecting the emboldened mood, formidable candidates have already indicated they are likely to run — even in districts that Republican incumbents have had little trouble holding.”

In another election post-mortem news, we have “Why did Trump win? More whites — and fewer blacks — actually voted,” by Bernard L. Fraga, Sean McElwee, Jesse Rhodes and Brian Schaffner at The Monkey Cage.

“Using data from the voter file vendor Catalist and information from the U.S. Census Bureau, we examine the change in turnout rates for different racial/ethnic groups between 2012 and 2016. Black turnout declined dramatically; white turnout increased noticeably; and Latino and Asian American turnout went up even more. In the key swing states of Michigan, Wisconsin, and Pennsylvania, those shifts were especially strong. How strong? Without those shifts in turnout from various racial and ethnic groups, these pivotal states might have gone not to Trump but to Clinton — giving Clinton an electoral college victory…Black turnout fell by 4.3 percentage points in non-battleground states in 2016 compared to 2012. But it fell by 5.3 percentage points in states where the election was decided by a margin of less than 10 points…But in Michigan and Wisconsin — two key Midwestern states where, to analysts’ surprise, Trump won — black turnout fell by more than 12 points…In the critical battleground state of Florida, white voter turnout jumped by 4 points — and black turnout fell by 4 points. Trump won Florida by a margin of just 1.2 points.”

Keep an eye on Klobuchar https://t.co/B7Kzlg5XEd

With Kirsten Gillibrand allegedly saying that she is not running, Minnesota Senator Amy Klochubar, 56, is now my favorite 2020 candidate.